Climate and landscape: continuity or contradiction

Climate and landscape: continuity or contradiction

Throughout the centuries, our planet has undergone various climatic changes. Since the ice age, several natural phenomena have occurred that have changed the face of Earth and have forced terrestrial and marine species to adapt to a new environment in order to survive. During this process, many of them have disappeared and others have evolved and changed their ways to be able to adapt to this new environment.

However, during the last 20 centuries, human activities have been the ones that have mostly caused a change in climate, derived mainly from industrialization and the change in the use of soils (generally the product of commercial needs and the increase in population), causing on the one hand structural damage to the landscape (such as deforestation and the disappearance of mountains, mountains and subsoil territories caused by activities such as mining, livestock and agriculture) and, on the other hand, a less pure air, an increase in the global temperature of the earth, and its consequent shortage of water. 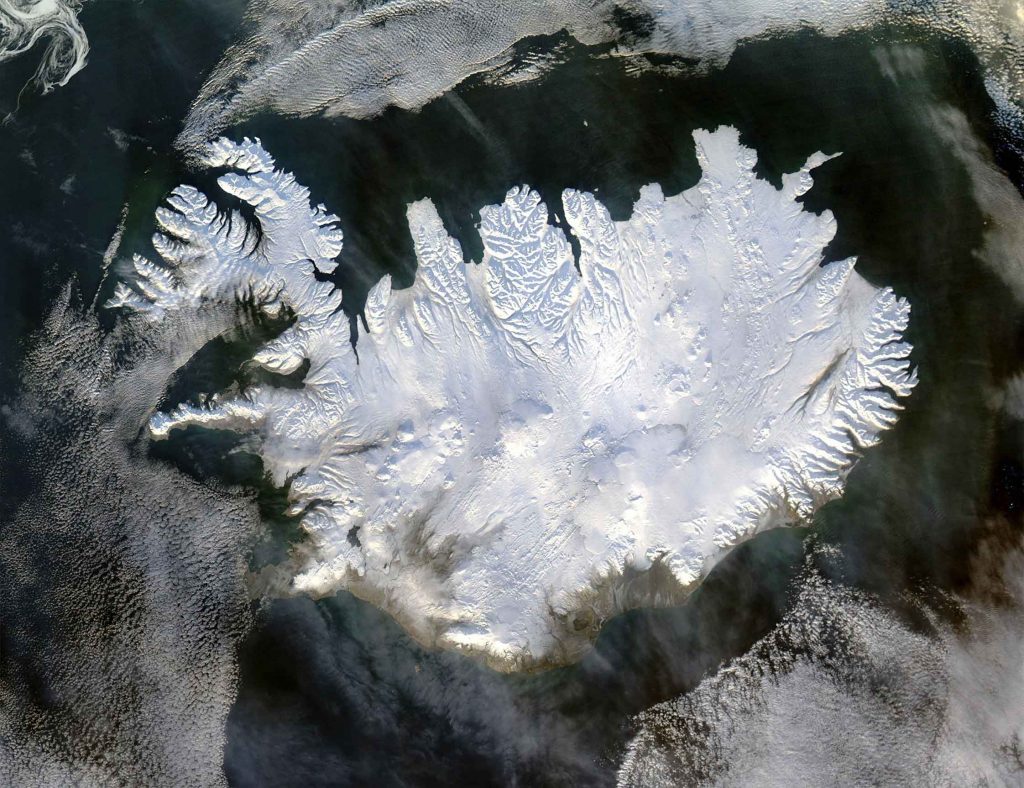 The excessive demand of natural resources (the felling of trees in particular), has desolated almost a third of the forest areas of the world, destroying forests that generated rain, purified the air and endowed temperate climates to different parts of the planet. In addition to this, there has been an increase in desertification (invasion of deserts in fertile land) caused by the destruction of tropical forests, which reduces the agricultural capacity of several countries. 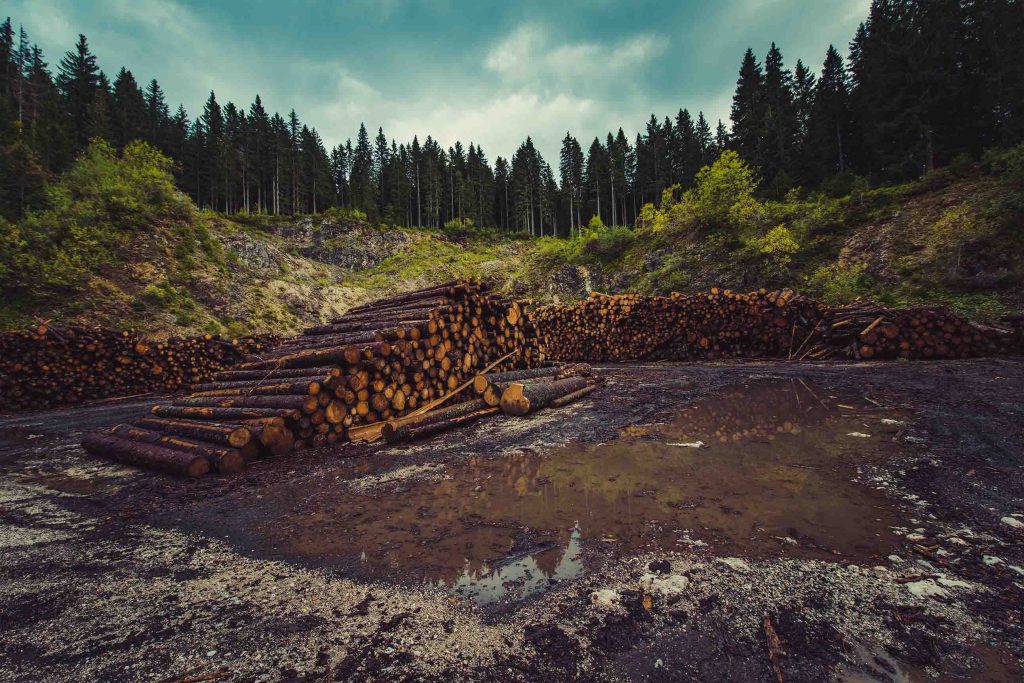 Deforestation can cause desertification, soil erosion, fewer crops, flooding, increased greenhouse gases in the atmosphere, thus being an important factor in climate change. 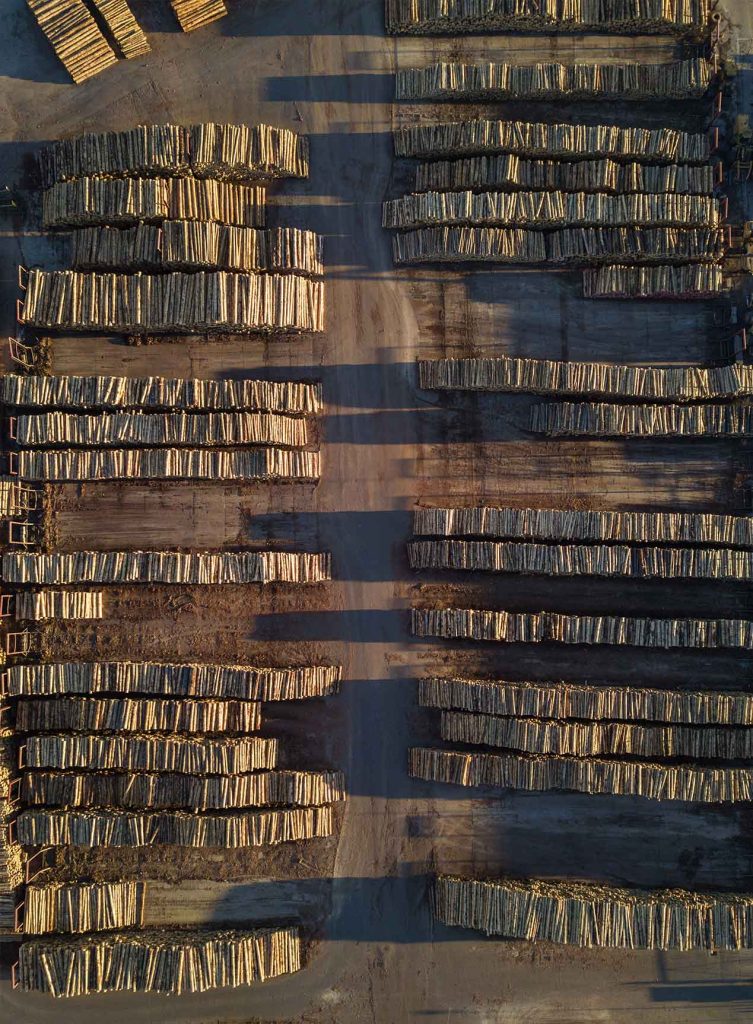 Thousands of logs are stacked into rows at a lumber yard outside Nelson, a city on New Zealand’s South Island.
Photography: Petra Leary (@petraleary ), http://www.dailyover view.com/seventy.

Forests carry groundwater to lakes and rivers, where it evaporates and produces rain cycles. Without trees, the local climate becomes drier. Any land that is deforested or overexploited increases the risk of desertification. As these dry areas expand, they reinforce the process of climate change and accelerate the transformation of Earth, favoring its devastating effects. Another negative effect is the acidification of the seas caused by atmospheric CO2, which, when mixed with seawater, makes it more acidic, which destroys the marine ecology and endangers the life of fish and aquatic species. 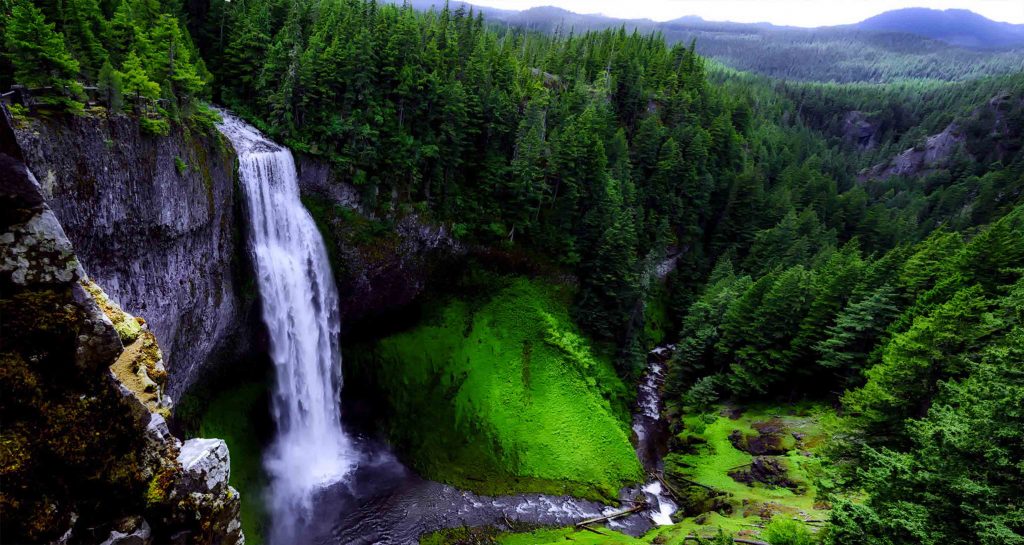 The main cause of climate change is the increase in the concentration of greenhouse gases (GHGs), especially carbon dioxide (CO2) in the atmosphere. These gases are emitted mainly as a result of human behavior, such as the burning of fossil fuels to produce energy. Building construction and energy use account for more than 30 percent of emissions worldwide, while the transport sector is responsible for another 30%. 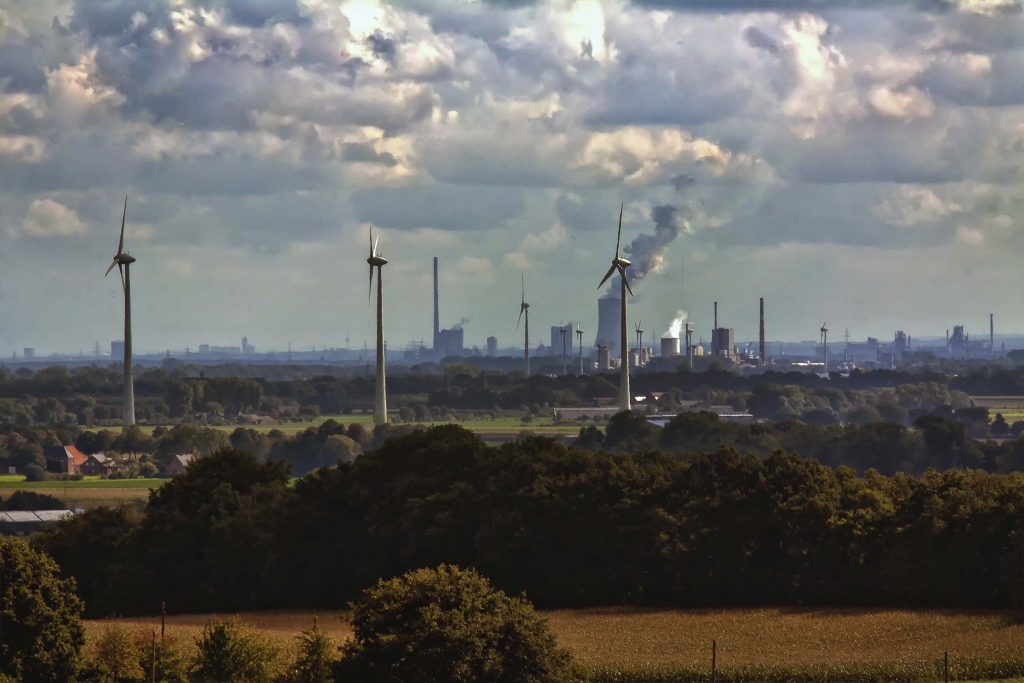 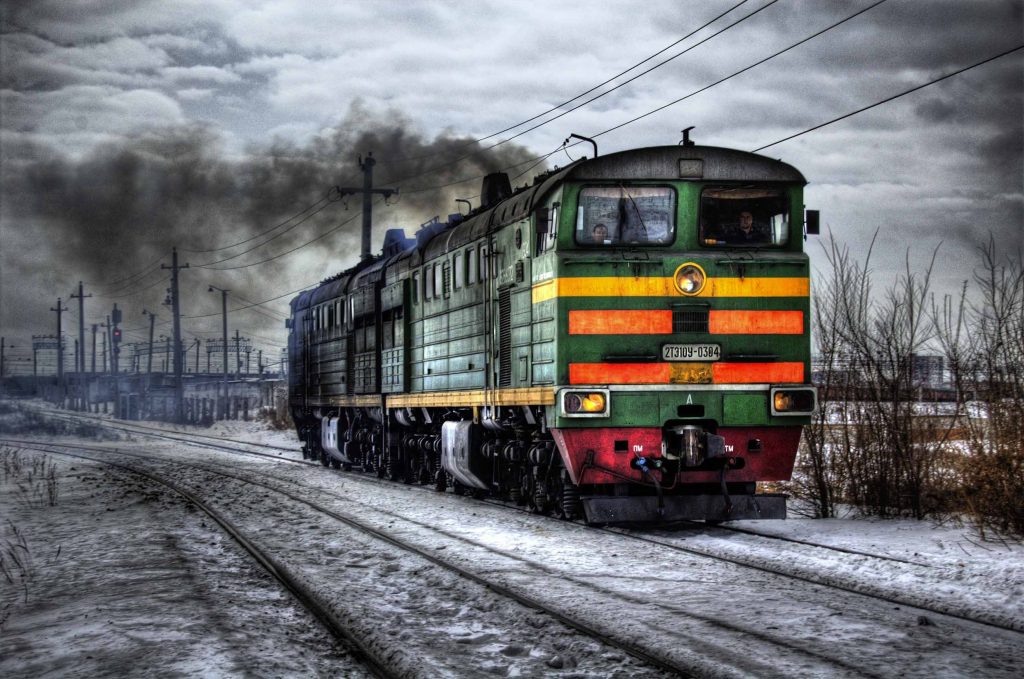 The Protocols of Kyoto and Copenhagen and Paris’ Conference.

The United Nat ions Framework Convent ion on Climate Change (UNFCCC) was adopted in New York on May 9, 1992 and entered into force on March 21, 1994. It allows, among other things, to strengthen public awareness on a global scale, of the problems related to climate change.

In 1997, governments agreed to incorporate an addit ion to the treaty, known as the Kyoto Protocol, which has stronger (and legally binding) measures for the part icipat ing countries. In 2010, the Cancun Conference was important to ensure that polit ical commitments to address climate change are made. Within the axes achieved in the Cancun agreements, the creat ion of the Green Climate Fund to provide financing for projects and act ivit ies in developing countries stands out. Addit ionally, the operat ion of a technological mechanism to promote innovat ion, development and dif fusion of climate friendly technologies was agreed.

Finally, the Paris Agreement aimed to “strengthen the global response to the threat of climate change, in the context of sustainable development and ef forts to eradicate poverty” through three concrete act ions: 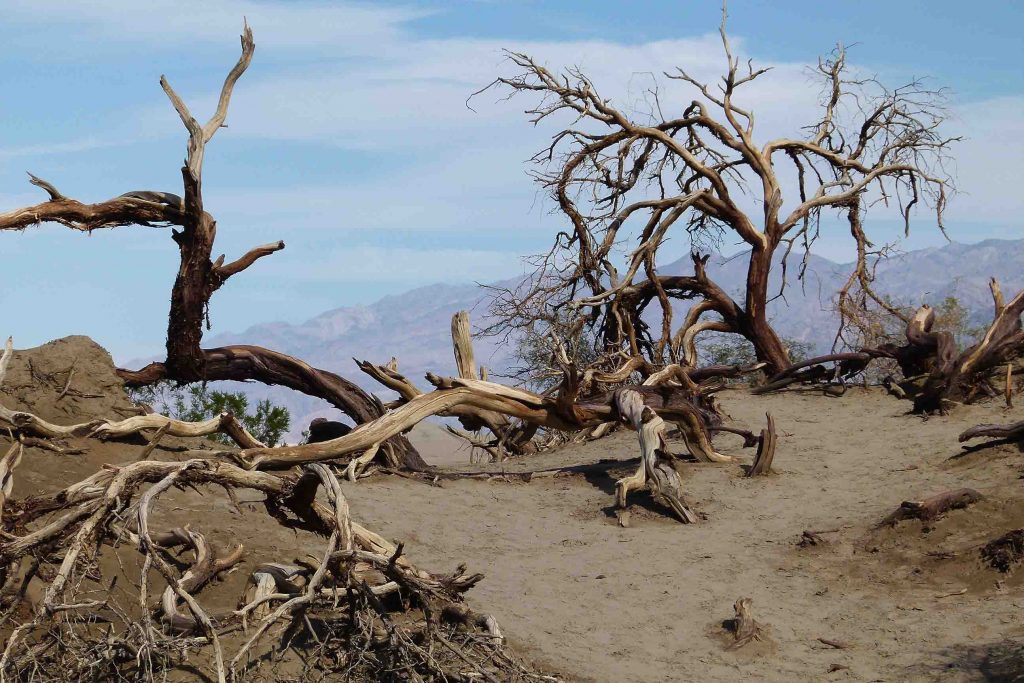 The new climate and landscape.

Future temperature increases represent a great challenge for our civilization. The landscape has changed and will continue to change: Forested areas have become deserts, snow-capped mountains are now green, thousands of kilometers of coastline have lost their beaches and now they are part of the sea; many acres of jungles are now barren land and this trend will undoubtedly continue for more efforts to be made.

Landscape, which has the invaluable capacity to adapt and be transformed, can and should be used as a fundamental tool to reduce climate change and its effects.

For example, cities can lower their temperature by planting trees and generating green areas that increase the degree of shade and humidity, reducing the environmental temperature.

On the coasts, the conservation and planting of mangroves that protect coastal landscapes from erosion is also working to protect animal and plant species in danger of extinction, besides providing an environment conducive to agriculture and new commercial activities.

To counteract the threat of desertification, countries such as China are planting a 5,700-kilometerlong “green wall” (tree barrier) to preserve the boundaries of their agricultural land. Unfortunately, other nations lack resources that allow them to adopt measures like these and are already suffering the consequences in the form of famine.

This leads us to the conclusion that it is urgent to continue taking measures at all levels and at all scales, to preserve the landscapes in different parts of the world, in order to safeguard the species that inhabit them and continue to maintain the delicate ecological balance that allows the life and development of civilization. 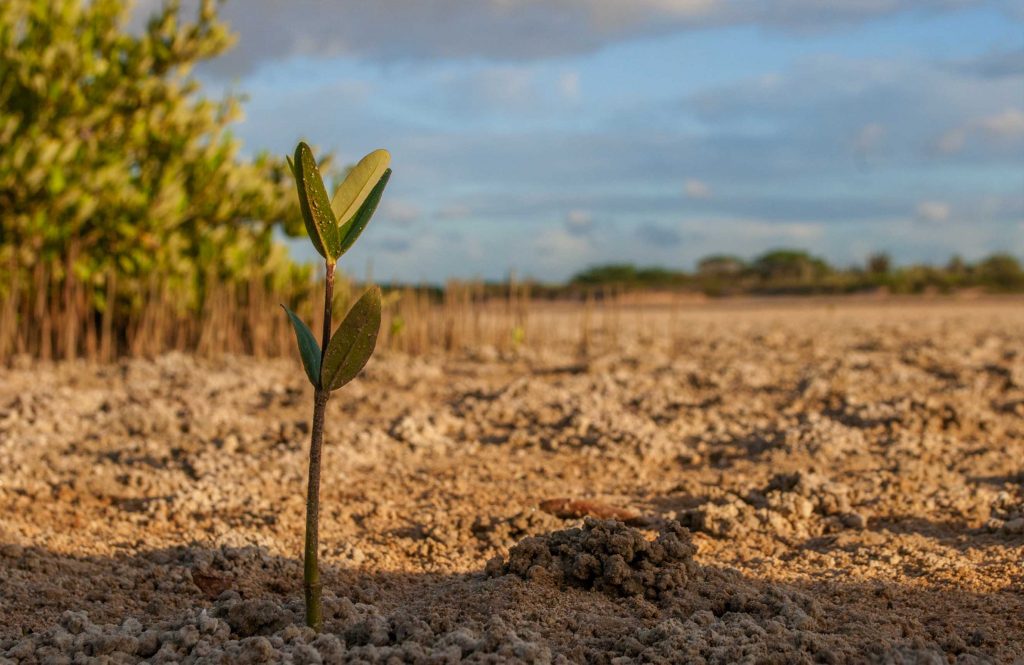 The different disciplines must work together and be supported by national and international policies to reduce as much as possible the phenomenon of climate change, but urbanists and landscape architects have a fundamental role, since it is in their power to propose effective solutions to improve the environment through congruent, effective, sustainable designs adapted to each geographical and cultural context of the planet. 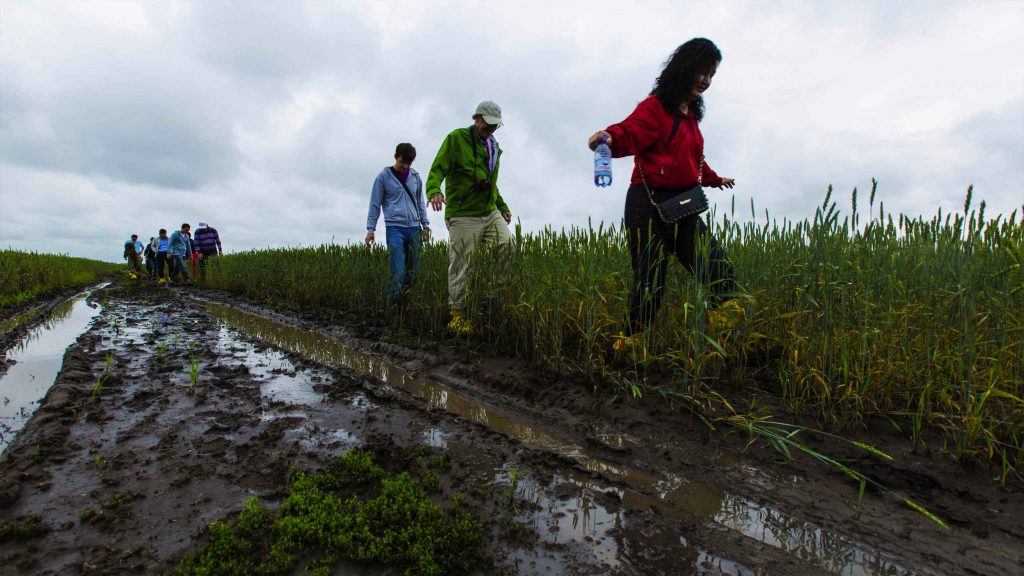 Of the human beings, custodians of our planet, it will depend that the climate change is a surmountable challenge that gives meaning to a responsible behavior and benevolent with the environment. Each one of us, from our own specialty and ecological conscience must make this phenomenon become a continuity for the welfare of the planet and not a contradiction that ends up destroying landscapes and life as we know them today.