Between art and science, the evolution of landscape notion

Between art and science, the evolution of landscape notion

The concept of landscape has a broad and interdisciplinary character, which added to its popularity in recent decades, has generated some confusion in its application.

We don’t live in a blank and neutral space; we don’t live, we don’t die, we don’t love in a paper sheet rectangle. We live, die, love in a gridded, trimmed, disjointed space, with zones of light and zones of shadow, level differences, steps, holes, reliefs, hard zones and others to crumble, to penetrate, porous…” (Foucault 1966)

The etymological origin of the term comes from the Latin pagus or the Anglo-Saxon Land; both roots refer to the concept of country or territory (Pickenhayn 2007).

However the landscape as a contemporary concept consist not only of a spatial or natural entity.

According to Joan Nogé (2010), the difference between landscape and nature is that nature exists per se (by itself), while landscape exists only in its relationship with the human, in so far as he perceives and appropriates it.

Therefore landscape is a social construction that embodies the human experience with the territory. 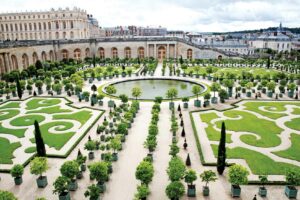 Gardens of the Versailles Palace, in France

However it was not until first century AD, with the work of Marcus Vitruvius, that there is documentary evidence of urban planning as a reflection on man’s interaction with the territory.

Also, during the Italian Renaissance, the introduction of perspective into painting will constitute the first approach to landscape representation.

In the sixteenth century in northern Europe landlords ordered paintings that capture their domains in order to display them on the walls of their palaces as a symbol of their power (Urquijo and Barrera 2009).

Within this tradition, the Flemish artists, such as Rubens, first introduced the landscape not as a background, but as a stylistic resource with its own expressive capacity. Hence, the Dutch term Landchap for first time will constitute the representation of nature (Duby 1991).

In seventeenth and eighteenth centuries the landscape painting tradition is mainly consolidated with artists such as Claude Lorrain and Nicolas Poussin.

Simultaneously a new profession arises from the aesthetic conception of nature. The Landscape gardeners in England or the Jardiners royales in France would start working  for kings and nobles in the exteriors of their palaces according to different canons. 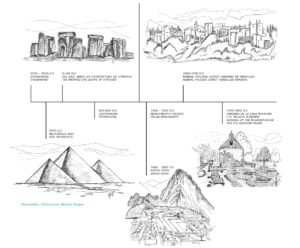 In France André Le Nôtre, gardener of Louis XIV, constitutes a world reference building the gardens of the palaces of Versailles, Vaux-Le-Vicomte and Chantilly. These examples, inspired by the Florentines renaissance gardens, are the materialization of the theory Le Nôtre gardens.

The use of plant walls which form a game perspective, the use of light and shadow, the oblique paths, the parterres, the fountains, the sculptures… all these elements make the characteristics of the French Baroque garden.

These “English” gardens were inspired by the paintings of Poussin and Camille Corot, and intended to introduce an idealization of nature.

In 1731 Alexander Pope, English intellectual and poet, in his epistle to Lord Burton wrote a tribute to the way of working the gardens respecting the original character of the place.