From June 23 to July 3, 2018, the second ArnoLab workshop was held in Florence, organized by the Italo-Mexican group LWCircus. Immigrants, landscapers, architects and artists from various parts of the world met on the banks of the Arno River to work and re-think on the problems of river, located in one of the most visited historic cities in the world.

Nowadays our cultural landscapes are not only the stratification of that sophisticated socio-ecological mosaic that has overlapped over time, but the result of a vortex of flows of people, goods and services that cross it, leaving a multitude of open signs, more than ever, to multiple interpretations.

LWCircus (1) was born in 2016 based on the concerns of Annacaterina Piras and Pedro Camarena to create a series of international, applied and experimental landscape encounters, in which new strategies based on social practices for the sustainable territorial development in threatened areas and the revitalization of cultural landscapes are investigated, focusing on the Mediterranean Basin and developing countries. 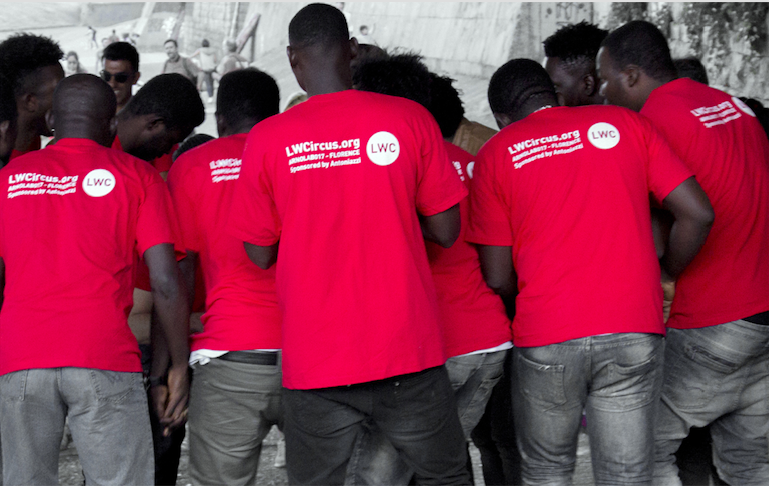 Thinking of a sort of “Renaissance within urban landscape”, the research at the base of the LWCircus International Program (with devices like the ArnoLabs Shared Creative Workshops), focuses on experimentation through artistic languages, through the use of art as a channel, it can give back meaning to places and reconstruct those ways of living and enhancing the landscape, typical of the times when communities actively contributed to the construct ion of their cities. During both Florentine editions, an international, multi-cultural and multidisciplinary community tested on the field shared practices by using multimedia languages, artistic approaches and performative-spontaneous attitudes. 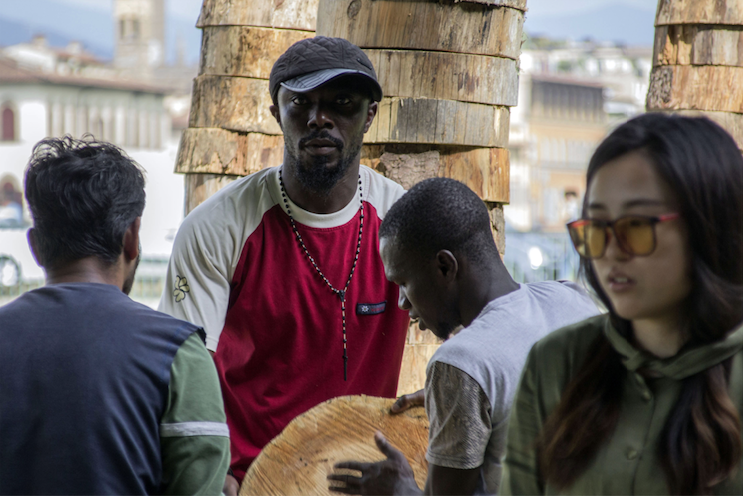 “Future’s Vestiges” sculpture is installed on the upper part of the platform in the first zone. It is formed by circular blocks of raw wood that make up a series of decreasing columns distributed in a tripartite arrangement. Photography: Mario Ristori

The work was held in the specific urban context, with the direct involvement of local actors and public institutions responsible for the River’s management and safeguard, looking for a RESILIENT and INCLUSIVE urban future, in terms of responsible cultural valorization and sustainable development for the local community and the diverse minorities directly involved in each step of the operative shared process.

In both editions, groups of young refugees, survivors from the Mediterranean crossing, from Nigeria, Senegal, Mali (ArnoLab017), Burkina Faso, Ghana, Gambia and Bangladesh (ArnoLab018),were invited to join the rest of the international creative group (from Mexico, China, the United States, Australia, Lebanon and Syria, Colombia, Venezuela, the United Kingdom, the Netherlands, France and Italy).

They were temporarily housed in the Florentine context, participating enthusiastically in the design and realization of the series of facilities, sharing hopes and wishes with the rest of the international and local participants, becoming a temporary part of the local community and beginning a process of social inclusion that gave life to successive opportunities for more inclusion in local realities. 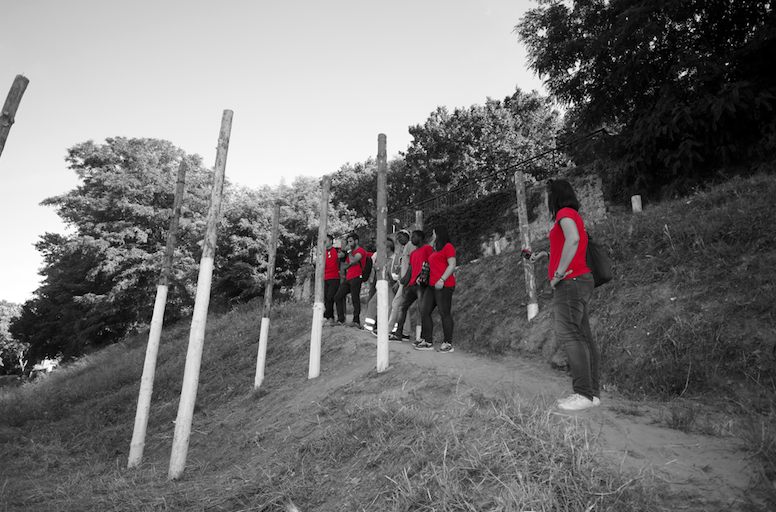 The second edition of the ArnoLab 2018 workshop (2) was organized thanks to the scientific coordination of Annacaterina Piras, Pedro Camarena and Chiara de’ Rossi, with the presence of three academic tutors with an internationally recognized track record: Walter Hood, head of the agency HOOD DESIGN with headquarters in Los Angeles; Henri Bava, creator of Agence TER, whose main of ce is in Paris; and Neville Mars, head of the MARS agency, installed in Shanghai.

The participatory process on the banks of the Arno River, between the Pescaia di Santa Rosa and the bridge alla Vittoria, using as center of operations Il Circolo della Rondinella del Torrino, gave life to a series of ephemeral installations, realized by recycling wood from the Vallombrosa Forest, sent by the Carabinieri Forestali, foresters partners of the initiative, which was transported by the Arno River, being collected on the site of the event by another partner of the Workshop, the Consorzio di Bonifica del Medio Valdarno. 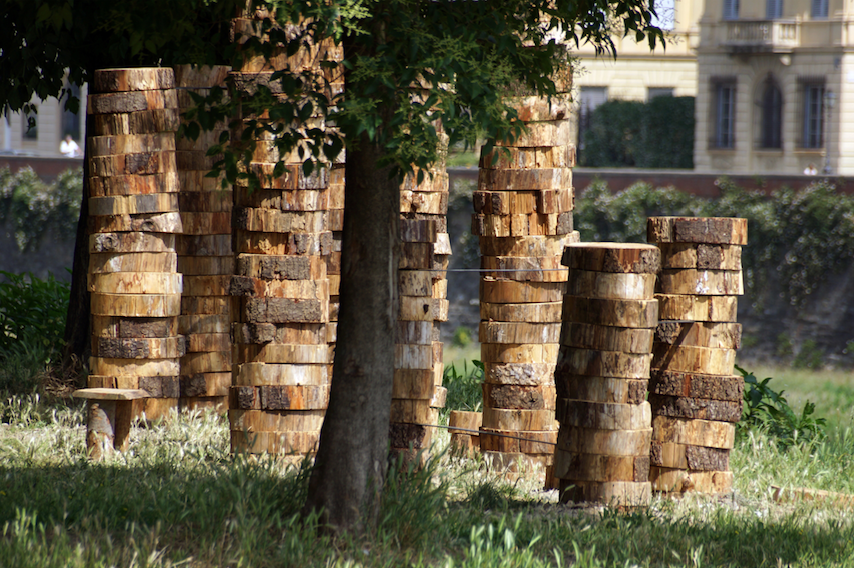 The members of the workshop decided to prioritize the problematic of the paradoxical relationship between the inhabitants of Florence and the Arno. In spite of being historically a primordial element for the life of the city -as a source of supply, transportation, commerce, among other uses- the frequent floods registered since the middle ages, particularly in autumn and winter, made the inhabitants have a certain distrust towards Arno.

How to live in the face of the constant threat of flooding? How can we promote a resilient landscape and a resilient society?

Given these questions, the Workshop aims to use social integration from art as a tool to generate social cohesion. This aspect is fundamental for the wellbeing of the communities and to respond before the future natural disasters.

In the second instance, the artistic-landscape interventions aim to encourage reflection by inviting the inhabitants to approach the Arno again in the summer, simultaneously evoking its changing character and the memory of the floods.

Finally, another condition of the projects was that the structures installed in the area should respond to criteria of reversibility, since the municipality agreed that it would stay in the place for only two months. 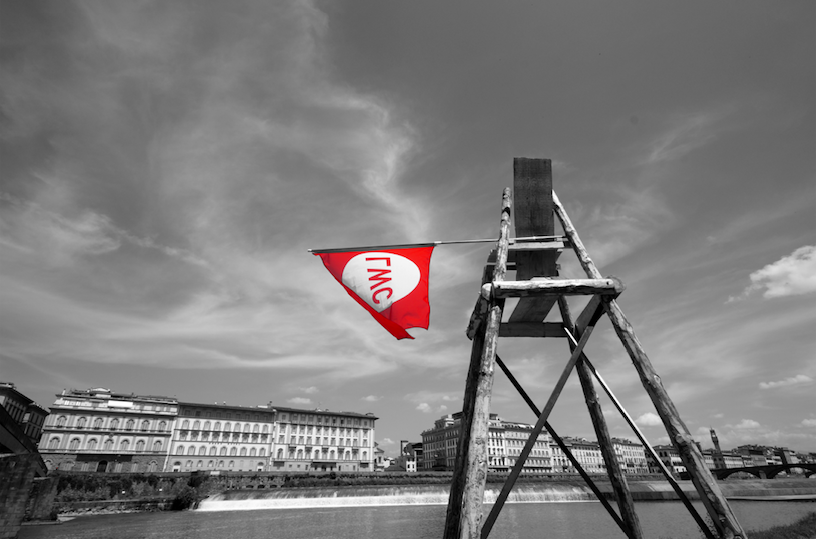 “Arno’s lifeguard” is a sculptural element that represents a lifeguard chair, like those that are frequently placed on the beach. It aims to communicate to the inhabitants, on the one hand, the recreational use that the river can have, and on the other, the danger that it represents during its floods. Photography: Andrea Faggioni

The students, assisted by coordinators and tutors, began to analyze and explore the different solutions. The proposals, while responding many divergent ways of conceptualizing the landscape and its problems, are simultaneously the testimony of an intense and fruitful social dialogue, in which multiple people, efforts and realities converged to materialize a manifesto:

The landscape must be built in an inclusive way, evoking the memory of the past and facing the challenges of the present and the future. 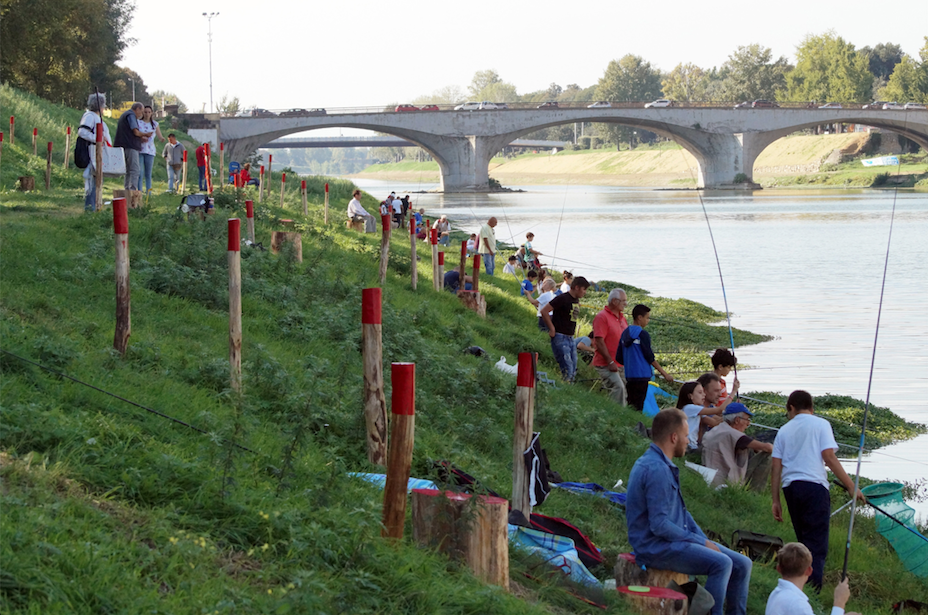 The locals, by sharing the process in conceiving and realizing the works, started in look at the others in a different way, transmuting the concept of “the other people” to the feeling of “us”.

The outcome desired was a re-appropriation of the traditional way of living the riverbanks, through a plausible common space, where different members of the community took ownership and manage the reconquered public space by interacting without any kind of discrimination, rediscovering the mutable open space as medium of cohesion between the community and the involved minorities.

2.To enlarge and promote the debate around the use of performative shared practices and multimedia languages in designing our contemporary urban landscapes, the Workshop also included the ArnoLab’s Review: performative practices, movies & open talks, a series of International Landscape Architecture Seminars and Open Lectures (ILARKS), in collaboration with the Scientific Direction of the Gallery of Contemporary Art Projects “Le Murate. Progetti Arte Contemporanea”. https://lwcircus.les.wordpress.com/2018/05/rivaprojectarnolabsreviewmoviesopentalks.pdf  & http://www.lemuratepac.it/en/