The labyrinth and the garden: An emblematic meeting in the European landscape

The labyrinth and the garden: An emblematic meeting in the European landscape

During different periods in the history of humanity, the labyrinth has had different symbolisms and interpretations, depending on the culture of the societies that have used it, therefore it has been represented in many ways.

Many authors, including Jonathan Mahen O’Farrell 2, place the origin of the labyrinth in ancient times, specifically in Egyptian and Minoan cultures, mainly appearing in diagrams and literature.

According to the same author, for the Egyptians the two-dimensional representation of the labyrinth represented the female uterus, i.e. the first abode of man.

“Of course, I am not without distractions[…] But of all the games, I prefer the one about the other Asterion. I pretend that he comes to visit me and that I show him my house. With great obeisance I say to him: -Now we shall return to the first intersection- or –Now we shall come out into another courtyard- or -I knew you would like the drain- or -You will soon see how the cellar branches out-. Sometimes I make a mistake and the two of us laugh heartily.” The House of Asterion, Jorge Luis Borges, 1947 1 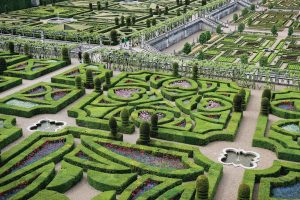 However, the best known reference from that period has survived through the literature: the history of the Labyrinth of Knossos, in Crete, where King Minos housed the Minotaur, a creature with the head of a bull and the body of a man, who was eventually killed by the Athenian hero Theseus, with the help of Ariadne.

Such labyrinth, which according to Greek mythology was built by the unfortunate architect Daedalus, passed to Roman culture from the texts of Plutarch and as an artistic representation was manifested mainly in the rich mosaics that paved the houses of the Roman patricians 3.

Later, in the Byzantine Era and throughout the Middle Ages, the labyrinth directly passed to the sacred representations, equally as a pavement, associating intrinsically associated with Christian symbolism; for example in the Church of San Vitale in Ravenna or in the Cathedral of Chartres.

Such representations, highly geometric, were used to illustrate the tortuous path of life, spirituality and patience. 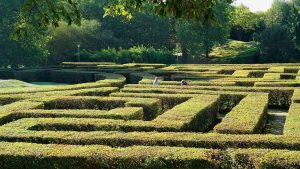 Labyrinth of the Parc des Fonts du Bièvre in Saint Quentin-en-Yvelines. The park was built in 1975 by landscaper Bertrand Lemoine.
Photography:
Anne-Marie LefËvre, 2016

“The labyrinth-garden tradition continues to this day, not only as a historical relic, but as a resource that is included on the recreational spaces.”

With the arrival of the Renaissance the association between the labyrinth and the garden begins to take shape, the world’s notions are no longer subdued to the divine order and the labyrinth or dedalus 4

finds its place in the palace gardens as entertainment of the nobles. The first references of such elements date from the fifteenth century, in the palace of Tea in Mantua 2, residence of Cardinal Ludovico Trevisan, in the Gardens of the San Paul Palace in Paris, and in many of the Royal Gardens of Charles V of France 5, who was passionate about labyrinths.

The labyrinths also had an important diffusion in Europe during the seventeenth century. Giovanni Battista Ferrari 6 explains in his gardening manual published in 1633, that two types of labyrinth-garden existed at that time: one low with flowers, which sought to enclose the look, the other was tall and thick and sought to enclose the user completely from the exterior. 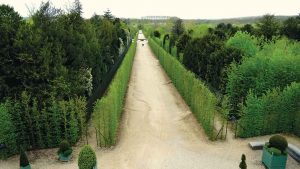 We can find some examples of both types in the palace of Hampton Court at England, in the Jardin des Plantes (Garden of Plants) in Paris, as well as in the palaces of Choisy-Le-Roi and Chantilly.

But undoubtedly, one of the most famous labyrinths is the one built in Versailles, under the reign of Louis XIV. Commissioned to André Le Nôtre around 1665 7, the garden was built southwest of the palace 8 having as guiding theme Aesop’s fables 9.

A series of thirty-nine fountains, decorated extensively with “rockery” 10 and zoomorphic sculptures made of polychrome lead, illustrated the stories of antiquity. Similarly, there were two sculptures flanking the entrance representing Cupid and Aesop, according to Charles Perrault figures that should guide us in the path to “love” and “be wise” 11. 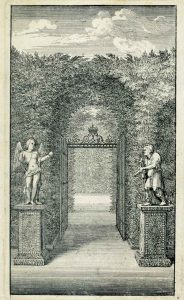 Cupid and Aesop in the entrance to the labyrinth, illustration from the book of Charles Perrault, 1677.
Photography:
Gallica, Biblioteca Nacional de Francia, 2013

The labyrinth of Le Nôtre, tall and thick, was conceived to prevent that the person could see the whole design; it was devised in a way that the observer, while making the tour of about seven hundred and fifty meters long and lasting a little over an hour, could always see at least two fountains simultaneously 12.

Such work was complemented by wooden trellis borde and benches to provide spaces for relaxation and meditation. 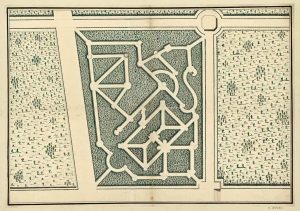 Drawing of the old labyrinth plant
of Versailles, 1675. This labyrinth is
characterized by its asymmetrical plant.
Photography:
Gallica, Biblioteca Nacional de Francia, 2013

Later on, towards 1680, the garden underwent several restorations and was constantly put in maintenance until early 1700, after a series of frosts destroyed it almost completely. It was replaced in 1775, at the beginning of the reign of Louis XVI, when the gardens were replanted.

Today all that is known of this magnificent garden is thanks to an extensive historical documentation, some archaeological work and certain reconstructions 12.

Girl plays at the “Labyrinth Octagon” by Moataz Nasr.

Many historical labyrinths still exist and keep changing according to natural cycles, others have been irretrievably lost.

However, the labyrinth-garden tradition continues to this day, not only as a historical relic, but as a resource that is included on the recreational spaces.

Nowadays, it is possible to see how in some parks and urban spaces, both children and light-hearted grown-ups still have fun hiding and seeking the way out in these emblematic spaces. 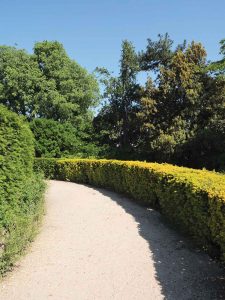 3   High social class of the Ancient Rome, composed by the noble descendants of the founders.

7  The first references are found in the reports of the minister Colbert in 1665, however the work does not begin until 1668 and ends until 1680.

8   Where the Queen’s Garden is found nowadays.

9  This was Charles Perrault’s idea, after De la Fontaine published the Fables of Aesop.