Land Art – Landscape as a canvas

Land Art – Landscape as a canvas

The Land Art considers the natural landscape in a meeting place, in a medium that serves as context to shelter artwork, transforming it in a stage that simultaneously inspires, frames and justifies.

Since immemorial times the human being has sought to interact harmoniously with nature and use its elements as a mean to perform various activities.

On an artistic level, he has tried to appropriate the territory in which it lives and transform it to create works that can transcend, temporarily or permanently, as a means of display and expression of ideas, feelings, fears, dreams and aspirations.

Some works, such as the monumental sculptures carved on Mount Rushmore, are an example of such landscape appropriation, and can be considered as precursors of Land Art movement, which would emerge in the late sixties and early seventies in the United States (Katsner 2010).

The term of Land Art is an expression created by the American painter and sculptor Robert Smithson (Raquejo 1998) to define an artistic movement that seeks to move art from the museums and workshops to outdoor spaces,using materials from nature and landscape asa basis for artistic creation.

This current breaks through the limitations of traditional formats, such as painting and sculpture, to find new horizons and forms of expression.

In this way, the artists begin a process of disengagement from the spaces typically associated with art as galleries, exhibition areas and even the city itself, to make of nature their environment and space of expression.

This movement transforms the open space into a canvas where artistic expression is captured. Simultaneously, natural materials become brushes and chisels working in a natural setting, which becomes the protagonist or creation model. 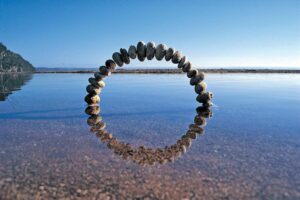 The Land Art transforms the natural landscape in a meeting place, in a medium that serves as context to shelter artwork, transforming it in a stage that simultaneously inspires, frames and justifies artistic creation.

This framework, which is none other than the earth understood as a two-dimensional sphere, stands then as an object on which it is able to draw, sculpt and build, in a medium suitable and fit for the design and creation.

Tracing with branches, painting with clouds, sculpting with soil and writing with water, Land Art artists seek to enhance the specific possibilities of a landscape and to highlight what exists latently in nature to, literally, create what it has never existed, although it has always been there. 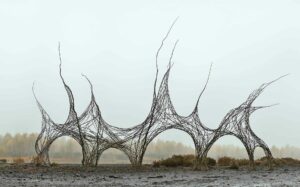 Linking sounds, colors and textures, the resulting works, often of monumental character, reflect with a minimalist simplicity the beauty of nature, echoing his greatness.

As the American artists Walter De Maria (Crump 2015) says, one of the characteristics of these works is their temporary or ephemeral character, since when incorporated as an element of the landscape, they have to be left at the mercy of natural elements, such as rain, erosion, wind and any change in the environment, where they eventually disintegrate and become part of it.

The works of Land Art often use abstract and a bit primary designs, derived from forms that can be found in nature, such as lines, spirals, circles and other geometric figures.

Sometimes the shapes are those of nature itself, that is, those of the used materials or the forms that determine the natural environment of the landscape where they are located.

The artwork is generally constructed with natural materials that are part of the landscape like stone, rock, branches, water, etc., along with other elements such as ropes, metal and even paper. 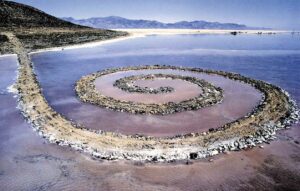 The “Spiral Jetty” (1970), work that Robert Smithson created in the Great Salt Lake of Utah, is a stone path 700 meters long that culminates in a spiral that serves as a lookout.

At first, the Land Art appeared in the southwest of North America, however, because of its temporary character, many of these early works now exist only in photographs or recordings.

The precursors of this movement began to create their works with a critical sense and as a mean of protest against the trend of artificiality and commercialization of art that marked this period in the United States.

Likewise, the Land Art grants a high value to the construction process of the work against the final result, that is, both the realization and the resulting work are valued.

Many authors have considered the beginning of Land Art from the work of artists Douglas Leichter and Richard Saba in Skowhegan School of painting and sculpture. However, the most representative works of this artistic movement were made in the seventies by Robert Smithson, Walter De Maria’s, M. Heizer’s and Nancy Holt.

Moreover, the work of Michael Heizer, “Double Negative” (1969-1970), consists of two deep cuts made in the land and separated by a natural depression which form a sculpture.

Finally “Sun Tunnels” (1973-1976), by Nancy Holt held in Utah, is composed of four huge concrete blocks placed in the form of “X” that let you see the summer and winter solstices from a unique perspective.

Some of the original works, despite their temporary nature, have not disappeared yet and can still be seen in its original state or with some changes they have undergone over time.

The Land Art has not only been practiced by artists from the United States. There are since the eighties proposals around Europe and during the last two decades it has been developing more frequently in places like Africa and Latin America. 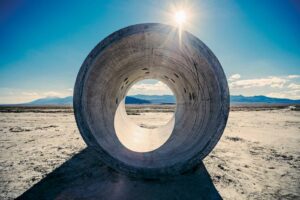 In Mexico, the artist Francisco Hernández is one of the exponents of this style. His work “La ballena Kuyimá” (The Kuyimá whale) is on a hillside of the desert landscape of Baja California.

This installation was carried out with the help of people from communities nearby, it reaches 600 meters long and its contours are formed by seashells waste 4.5m wide.

Its resurgence has given rise to various aesthetic styles such as the Eco Art (the “Environmental Art”) and the Urban Art, which promotes the practice of artistic interventions in public spaces within cities.

This important artistic movement, where the work is the place, confronts the human being with the enormity of the planet that he inhabits and with the vastness of the landscape that surrounds him, producing a unique and transcendent experience for the viewer.

An experience that shows that art can become a resource that mediates between ecology and science, between the natural and urban, between man and landscape.