By Roger Orellana Lanza (Phd and researcher in biology)

Living beings are the result of the environment transformations and have reciprocally transformed it since its emergence.

Interacting with each other they have established the biological systems, also shaped by the environment. In this way ecosystems have been developed since the origin of life over 3.5 billion years ago. Since then there have been many planetary changes that have affected the composition, shape and extension of ecosystems.

In a same territory there have been several changes, but there are systems that have disappeared and new ones have been created. The scenario in which the human species appeared was a wild landscape, which forced him to transform it and to emigrate, discovering new spaces.

Landscape from this point of view is that territorial space that the human being delimits based on certain interests, nevertheless it is a space in which all its components interact, which gives it a holistic character.

The scale is defined by the horizon and reach of such interests, however the indivisible unity where all the processes merge is called holon.

“Landscape perception has unique properties, the evident ones which are known as phenosystem and the hidden ones as cryptosystem.” 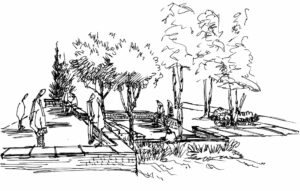 The phenosystem is the undeniable for the human eye, of these the most evident are the physical components such as atmosphere, rock-soil and vegetation-wildlife, and if human populations are present, its settlements.

The cryptosystem are all this causal relationships and processes that go beyond human instantaneous perception, such as the annual cycles, seasonal cycles and life cycles, landscape inner transformations and interactions between organisms and biotic factors.

In this manner, after the long history of man on the planet, we could try to find pristine landscapes and take the risk of not finding them. Hidden in apparently natural landscapes we have in their cryptosystem the presence of man in other times.

“The main challenges of landscape architecture are finding a balance between human action and the possibilities offeredby nature.”

The landscape can be considered as a territory shaped by nature over time as a result of different cyclic or sudden phenomena such as volcanic eruptions, tsunamis, earthquakes; or by human activity such as mining, oil extraction, agriculture and everything involving urban settlements.

We can call landscape architecture to any intervention to reconcile human needs with the preexisting natural and cultural heritage of the place, in order to make the most of these resources and provide a better quality of life.

In both concepts there is an evolutionary state. Personally, as an artist who works with photography, I am interested in capturing this evolution. I’m interested in inquiring the how and why of the transition from one state to another. It is honestly a thrilling and inexhaustible work field.

The main challenges of landscape architecture are projecting a city for the future; rescuing or preserving the territory with its sustainable heritage and customs that have shaped it; adapting the habitat to protect the citizens from the possible climatic phenomena, preventing the catastrophe; improving social network, preserving and promoting culture, infrastructure, and social policies.

In this sense photography and the work of many visual artists have been an ideal media to emphasize the dysfunctions of human impact on nature, to highlight the difficulties and witness the successes and failures of human interventions. 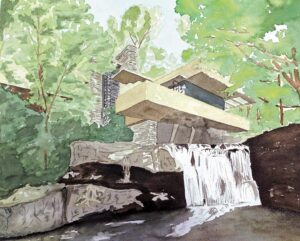 By Juan García Targa (Archaeologist and Phd in History)

Landscape architecture could be defined as that specialty of the architectural practice that affects the integration between a building model and the natural environment in a large sense.

This brief definition implies an obvious interdisciplinary work to build a project that takes into account all professional aspects associated: soil science, hydrology, geology, biology, climatology, history, archeology, architecture, teaching, etc., considering a diachronic and synchronic evolution of the space to be rehabilitated or projected with the prospect of being rigorous in its management and sustainable and consistent with its origin.

In this sense, for many years I have worked linked to the Local Architectural Heritage Service of the Council of Barcelona, unit dedicated to the rehabilitation of various architectural spaces from archaeological sites to Romanesque churches or industrial structures.

“Specialty of the architectural practice that affects the integration between a building model and the natural environment in a large sense.”

Within this perspective, architecture is the fundamental thread, but always complemented by archaeological studies of the buildings to intervene to meet potential backgrounds and relevant structural aspects, analysis of the materials to be used in new interventions and that the initial project and the final result is consistent with the environment in which the case study is.

Within these same service there are conducted Historical, Architectural and Environmental inventories of the province of Barcelona municipalities in which an interdisciplinary team led by an architect and formed of historians, archaeologists and biologists analyzes about the ground area, in the archives and by several visits the patrimonial reality in a wide sense.

Besides the description sheets of each one of the units, features of spaces unification, its meaning, protection of historical, social and referential value of certain parts of the population certainly ascribe this work within the orbit of what we could defined as the study of the landscape of a city.

“The non-aggressive man intervention to create harmonic spaces to which the community feels attached, represented, and where biodiversity has been taken into account.”

I once read an interview with landscape architect Alberto Negrini, in which journalist Daniella Fernandez describes him as “the sculptor of Mother Earth and universal flora planner.” I’ll take this beautiful description to begin with my point of view about Landscape architecture.

As an action field in Yucatán I believe that the recovery of public spaces is a great challenge and a great opportunity, to which we should design strategies that allow us to perform these actions without necessarily depending on political will.

It is important to make a sort of reading of the context previous to any sketch, that allows landscape architect to understand the culture and wealth existing in native flora species of the region. Nowadays local specialists are developing studies that seek to give value to those species (which unfortunately in our city we call “herbs”) consider and include them in a new concept of urban landscape.

Landscape architecture should be conceived as a multidisciplinary field. Landscape architect should design authentic ways of creating new landscapes, spaces that aren’t copies of those created by the different cultures. We are a society that longs for development, but we must be cautious with our aspirations and don’t leave aside our roots and our current conditions.

We must begin by defending and representing our cultural identity through landscapes with which all citizens, not just a few, can feel represented. Design through landscape architecture spaces that allow us to get back in touch with nature, appreciate it and defend it as a human right.