How these wonderful grains change the life and landscape of its producers and consumers.

Whether you take it in the morning, afternoon or evening; and no matter where you drink it (in the house, the office or in a restaurant), coffee is a drink that can interweave destinies, jobs, and behaviors.

More than four million Mexicans are involved in planting and harvesting activities related to coffee beans.

Currently, coffee is the 6th Mexican largest export crop, and Mexico is competing to be its top producer against countries like Brazil, Colombia, Ethiopia, Guatemala, Honduras, Uganda and Indonesia.

The coffee bean comes from a shrub born in Abyssinia (now Ethiopia in Africa), the plant was discovered by chance in the year 1140. The legend says that a shepherd named Kaldi, intrigued by the strange behavior of his goats, tasted the grains of the bush that the animals were eating and experienced a great sense of well-being, energy, and mental sharpness. 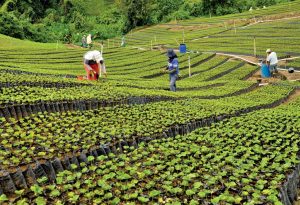 He brought his discovery to the monks of a nearby convent, where the superior, after having tasted them, threw them to the bonfire because of their bitter taste; However, when they burned, the beans released a sublime aroma that gave them the idea of preparing the infusion we now know.

Coffee came to America through the Mexican region of Cordova, Veracruz around 1796 from the Island of Cuba. The plant quickly adapted to the conditions of its jungles and forests, displacing even cacao as the Mexicans favorite product. 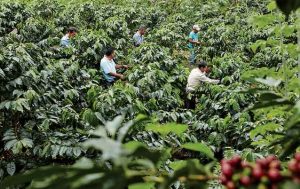 In early Summer, the landscape of the coffee fields is transformed into a beautiful carpet of furrows with hundreds of farmworkers who start planting so that the plant is well established during the winter.

To obtain a steaming cup of exquisite coffee, the crop takes 4 to 5 years to produce its fruit, which is cut manually one by one.

Afterward it is taken despulpar (de-pulping) in the beneficiadero; This means removing the pulp from the cherry and leaving the seed clean. Then it is classified according to its degree of purity and washed to make a second selection, this time by size and weight. 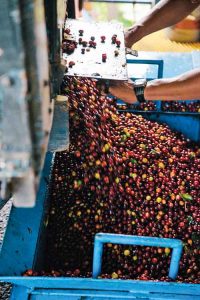 Subsequently, comes the “drying”, which is extremely important in the process of obtaining coffee. With wooden shovels, the farmworkers move the long rows formed by the grains in the “asoleaderos” (sun-drying fields) so that the heat of the sun can dry them and remove the humidity. Drying takes 4 to 5 days, although it can also be done with machinery, which reduces the drying time to 30 hours.

The resulting coffee (seeds covered with a protective layer) is called “parchment”.

By a final crushing process, the peel is removed, leaving only the seeds, which are known as “gold coffee”, the highest quality one. Generally, each buyer performs the process of roasting and grinding the grains according to his or her convenience.

There are two basic types of plants grown in Mexico: arabica and robusta. The first occurs at a height of 500 to 2 thousand meters above sea level; its taste is smooth and it has a caffeine content of 1.5%. The sturgeon, which is more resistant to pests, contains 2.5% caffeine and its taste is rather rough. 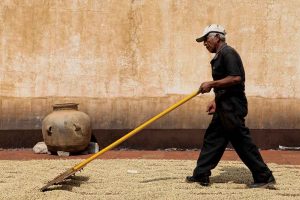 The drying of the coffee grains. Photography: Alex Washburn

“Mexico is the first producer of organic coffee in the world. In addition to conserving the ecological balance of soils, it is free of chemicals and pollutants and uses agricultural waste through recycling and composting.”

In our country, the coffee production aims at the sustainability of the ecosystem. This logic is strongly associated to the harmonic management of land that the Indigenous people have made since ancient times.

In the Mexican coffee landscape, the tropical jungles are intermingled with coniferous and mesophilic forests, resulting in a surprising panorama.

They are inhabited by local fauna (jaguar, tapir, quetzal, peacock and otters), also the thick jungle trees join with the cloud forests in a surprising way.We hear the song of the pajuil, and the sound produced by frogs and snakes at night. Little by little, the trees are covered with orchids, bromeliads, lianas and hay. 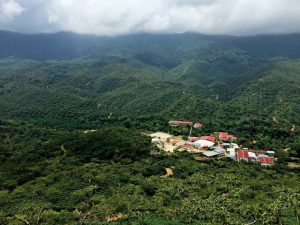 The coffee is not only an economic heritage of Mexico but it is also environmental beauty: portraying the farmworker soul which moves around the plants and capturing the fantastic atmosphere of the landscapes and growing harvests. Coffee runs in our blood. It is landscape and tradition that lives embedded in the most intimate of our customs and is proclaimed in the conscience as another symbol of our national identity.

The Mexican coffee landscape is made up of slopes and mountains upholstered in green. The coffee trees, adorned with yellow and red flashes, grow under protective trees, rocked by fog. It is complemented by the song of the birds and the presence of other fantastic creatures.