Mexico, the country that emerged from water

Mexico, the country that emerged from water

While clouds remain calm between the mountains, carving the valley of México, there is Maria Candelaria, paddling between canals while singing a sweet melody.

There she goes through trajineras 1 and forests full of tall and spiky trees which seem to emerge from the lake that reflects beauty and peace. Her boat, just like this dream environment, goes full of flowers, she wants to sell them to repay an unfair debt.

Meanwhile, Lorenzo, his only true love, watches her from the ground, worried. With this scene of tragic beauty commences the classic Movie “Maria Candelaria”, which has to Dolores del Rio and Pedro Armendariz in the leading roles.

“María Candelaria”: Through this important film of 1944, Emilio “El Indio” Fernandez, the director, and the visionary photographer Gabriel Figueroa, transmitted us a series of images, so symbolic and spectacular, that would remain marked in our collective memories about what our nation really means.

“The Great City of Tenochtitlan” mural of Diego Rivera. It was painted in 1945 and is located in the National Palace in Mexico City. The work shows the Aztec civilization thriving in the market and in the
background Tenochtitlan, the Aztec capital, founded
on the Texcoco Lake.

Through this important film of 1944, Emilio “El Indio” Fernandez, the director, and the visionary photographer Gabriel Figueroa, transmitted us a series of images, so symbolic and spectacular that would remain marked in our collective memories about what our nation really means.

In that landscape, we learn about the traditions, the mores, and the scenes of the Mexico’s rural life in the early 20th century. All this was largely achieved by choosing the right place: Xochimilco. 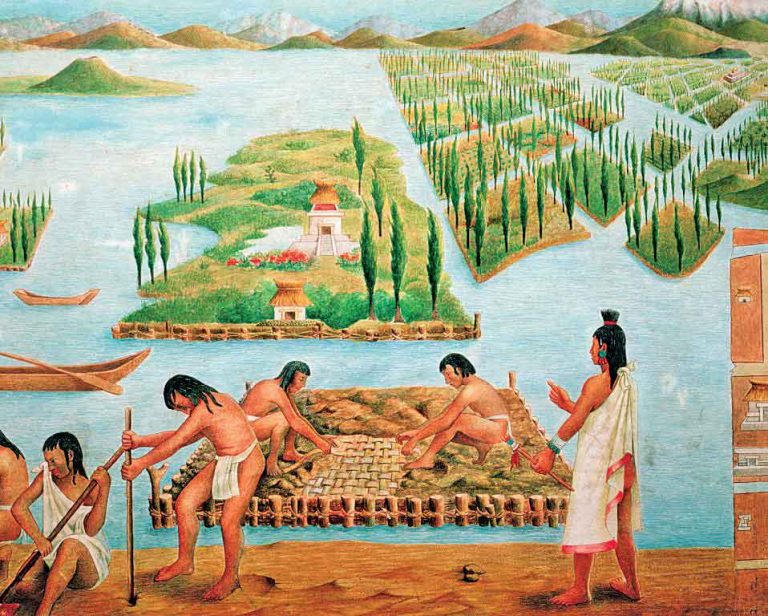 The chinampas were created to generate areas of fertile soil.

This important site, unique in the world, was formed by a clever system of agriculture, which survives until today since pre-Hispanic times, the chinampas. This system makes possible to take full advantage of the lacustrine environment, and is more ancient than Tenochtitlan itself.

Generation after generation, the citizens of México have traveled happily through its water canals. Nowadays very little remains of this wonder, but the chinampas are still very appreciated because of a wide variety of interesting motives, including  its agricultural use, biodiversity and the creation of an immensely beautiful cultural landscape. 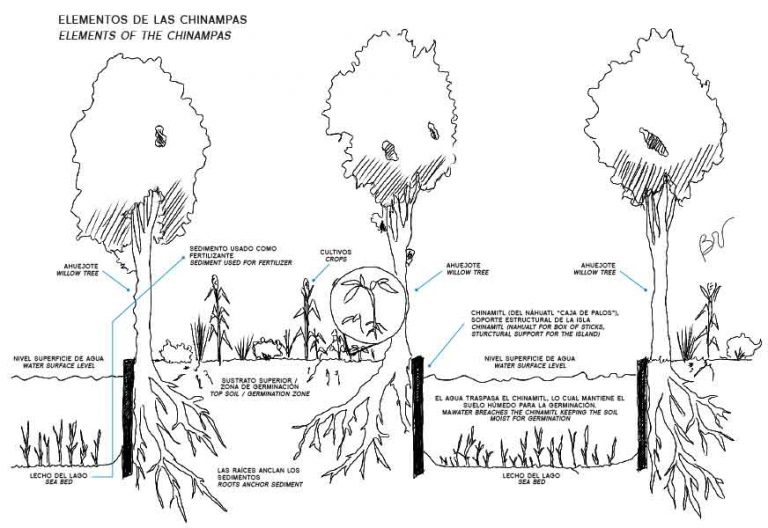 Since the time when Aztlán people settled at the lake Texcoco, over the islet that was marked by an eagle devouring a snake 2, they sought a permanent nourishment source and adequate places to establish permanently.

But they had a challenge to overcome; the enormous surrounding space was filled with water up until the horizon, limited by riverbanks 3. In such hardships, one of the greatest civilizations was originated.

The agricultural system denominated chinampa arose from the need to create an arable land where there was none.

With floating and flexible logs and branches, they designed surfaces coated in mud and created moving islands on the surface of the water.

Later they discovered in the surroundings the ahuejote (Salix bonplandiana), a tree with a long root which could provide fixation to the islands. 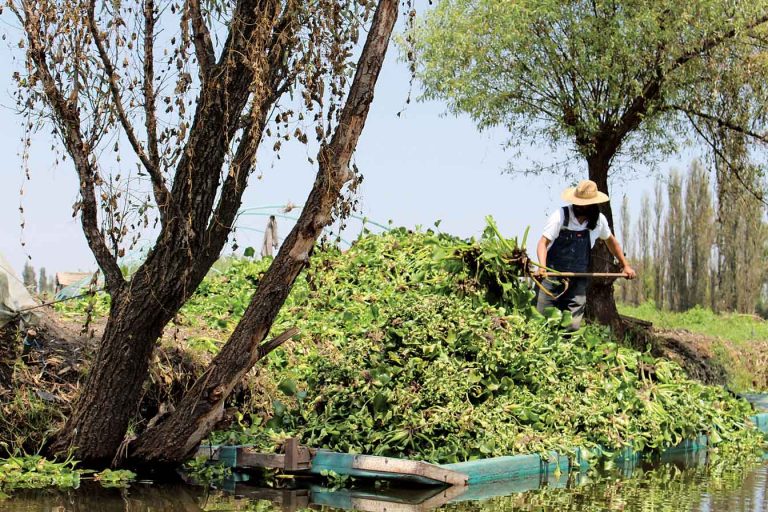 The chinampas are an agricultural production method that does not require irrigation or pesticides.

Then, by gathering several structures, they were able to plant in the mud a large number of species, including corn, beans and pumpkins; this permitted the diversification of the alimentation 4.

Occupying more and more space over the lake to seed, and to live, the Aztec civilization flourished. All of this was achieved through the system of chinampas.

As time pased, and beginning with the Spanish occupation, the lake was perceived as an obstacle to the development of the city, dredging down the water areas.

In the present, due to the rapid pace of urbanization, coupled with pollution, only some chinampas areas survive in the southwest of Mexico like Tlahuac, Milpa Alta o Xochimilco itself, declared world heritage by the UNESCO in 1986, along with Mexico City 5.

In spite of that, we can say that the big City of México, The “City of Hope”, stands on this millenary chinampas.

There is no easy way to explain the value of that system. The bond between the human ingenuity and men’s work with nature is worthy of admiration. 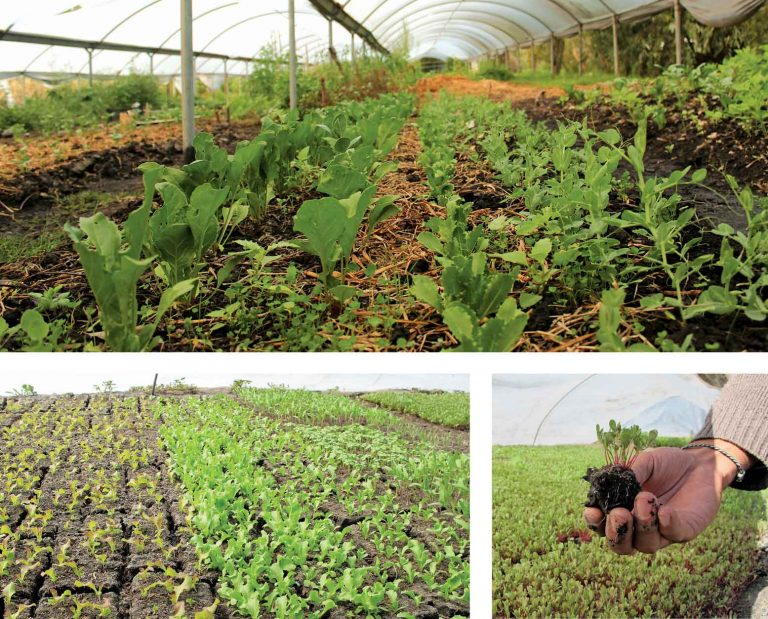 The waters of the lake keep the floor of the chinampas is moistened, which makes it very fertile.
Photography:
www.dondecomere.net

The chinampas generate a self-sustained system of feeding in which is possible to grow species like epazote, chamomile, lettuce, coriander, radish, broccoli, among many other species; it functions without irrigation or pesticides.

It also allows great biodiversity of flora that includes (besides the ahuejote) ahuehuetes (Taxodium huegelii), eucalyptus (Eucalyptus cinerea) 6 and many others. 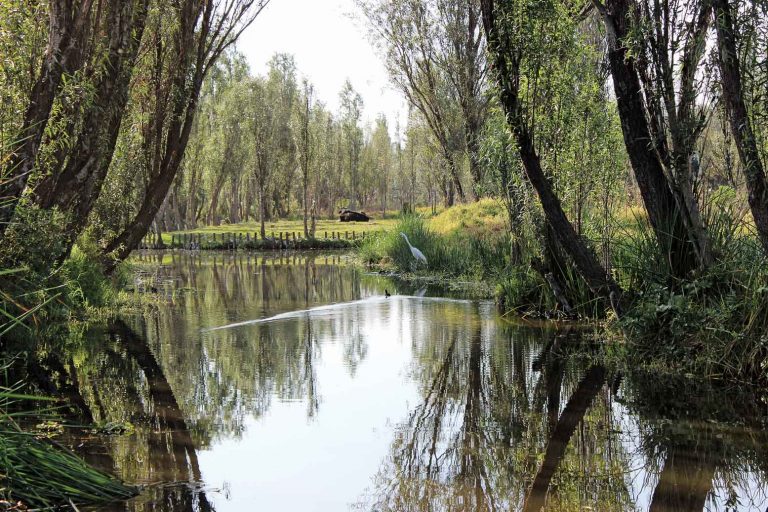 There is also a vast amount of  terrestrial, aerial an aquatic animal species; we can find species like herons (Nycticorax nycticorax and Butorides virescens), the mexican duck (Anas p. diazi) and white pelicans (Pelecanus erythrorhynchos) 7; also carps that live with the ajolote (Ambystoma mexicanum), a sort of salamander which only exist in the bottom of those waters, endangered.

Besides everything, Xochimilco is a site that made possible the growt of a wide diversity of traditions and cultural heritage that reflect the passing of time since pre-Hispanic or colonial times until today.

The synergy of all these elements makes the chinampas an invaluable ecosystem that does not renounce its beauty, despite adversity.

Another aspect that deserves to be underlined is the fact that the FAO (Food and Agriculture Organization of the United Nations) recognizes the chinampa system as a great possible contribution that could mitigate the food and environmental crisis in the planet, because of its resilence, meaning its form of adaptability and regeneration as a living ecosystem.

It is fundamental to know about the chinampas, understand and value them, so we can prevent its abandonment. Maybe one day, we can love them back just like Maria Candelaria did, and say her words: “this is our land, look how black and soft, how could we ever leave?”

2 As told in the legend of the foundation of Tenochtitlan, which is also the origin of Mexico’s National Shield.