Fauna as a part of the coastal landscape

Fauna as a part of the coastal landscape

When contemplating a landscape we usually observe physical elements like the sea, vegetation, architecture and all those material elements, fixed and immovable that compose it.

We tend to forget that there also exist temporary, transitory and ephemeral components, without which it would be impossible to appreciate and understand it in its true magnitude.

We refer to fauna in its generality, all those living beings that are actively involved in the maintenance and development of the coastal natural context and whose intrinsic relationship with the environment, allow us to properly understand and appreciate it. 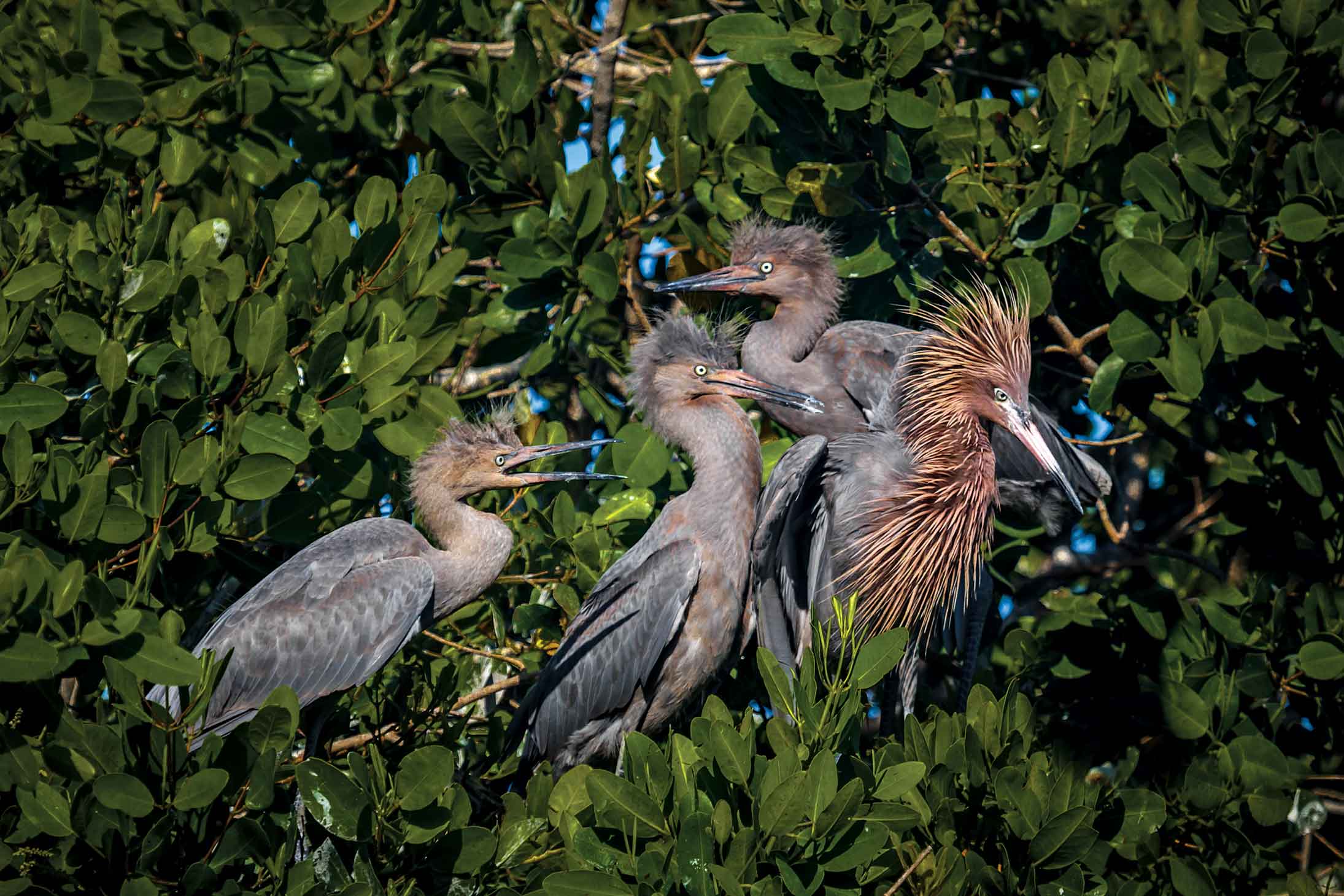 While it is true that vegetation and geography themselves can characterize a landscape, it results more difficult to demonstrate the importance of fauna because it plays a little role in visual perception, except when it comes to certain circumstances or species.

However, subtle factors such as sounds, colors and smells produced by these beings, are essential in our interpretation of a space like the coastal landscape. 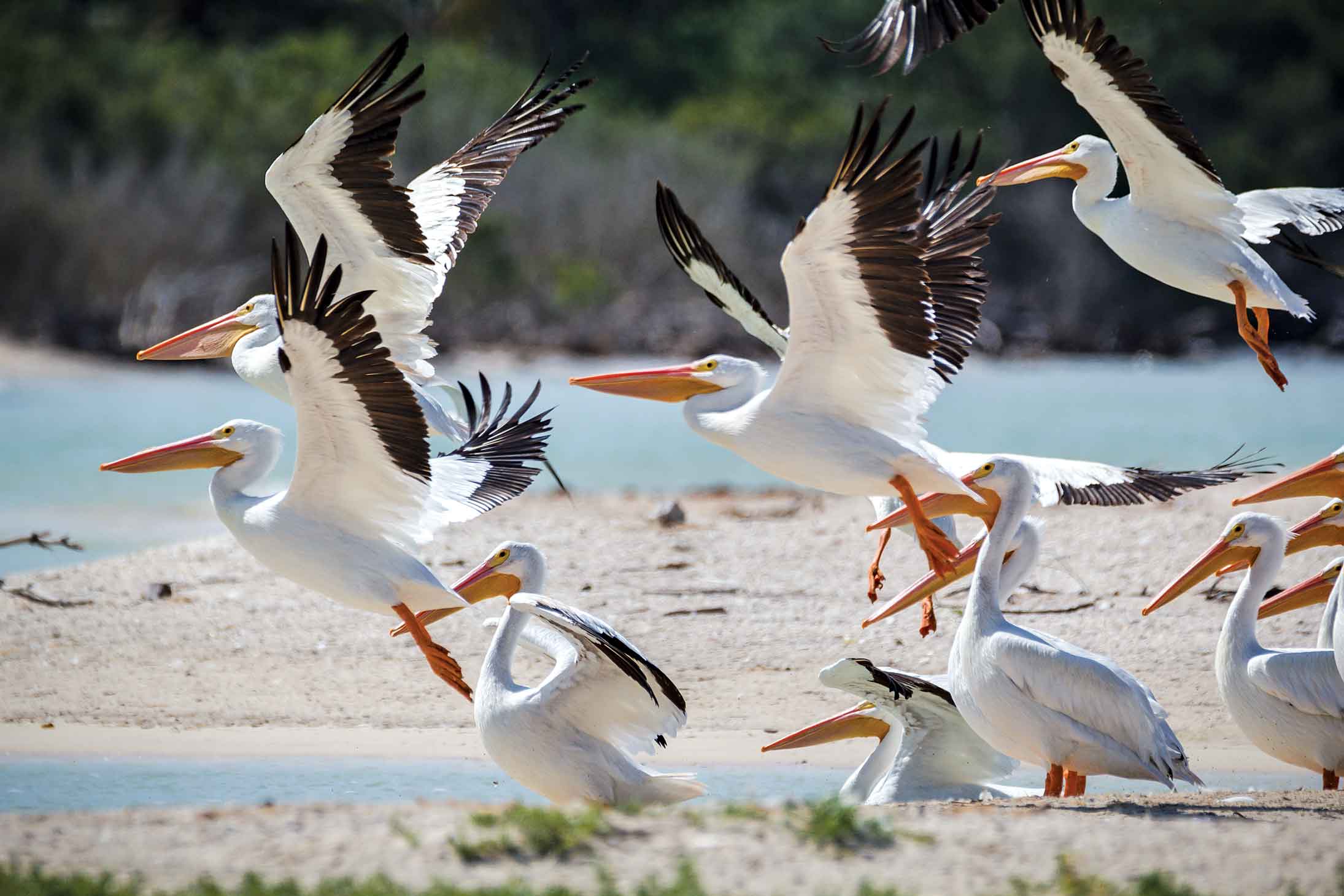 Some animals can provide essential data for understanding better the analyzed place, and therefore, are fundamental to obtain a correct interpretation of landscape.

That is, we can assure that animal presence, no matter how small, becomes a fundamental piece of the natural environment as it interacts with it, and is an essential part in the perception of their environment. 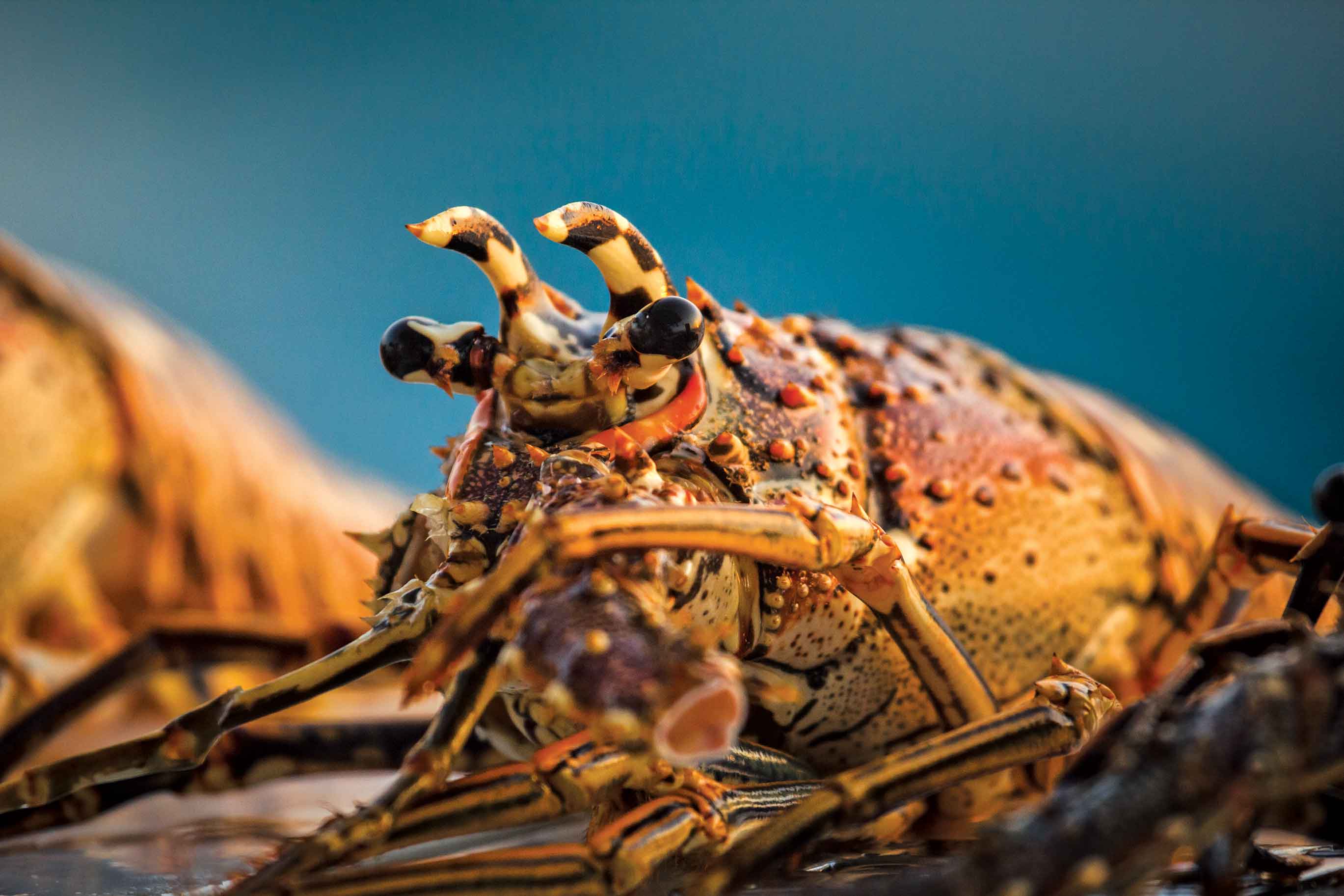 Although researchers from different disciplines have studied for decades coastal vegetation and fauna, only a few have studied the role of animals in the sensory input of landscapes.

Like the flora, the animals are usually not (except for specific examples) visible elements of landscape, especially because wild individuals tend to go unnoticed, hiding and blending in with its surroundings.

As an added value for the coastal landscape, great part of the Mexican littorals have extensive mangrove areas, which by themselves represent the ideal habitat for hundreds of water, terrestrial and aerial species; some of the endemic. 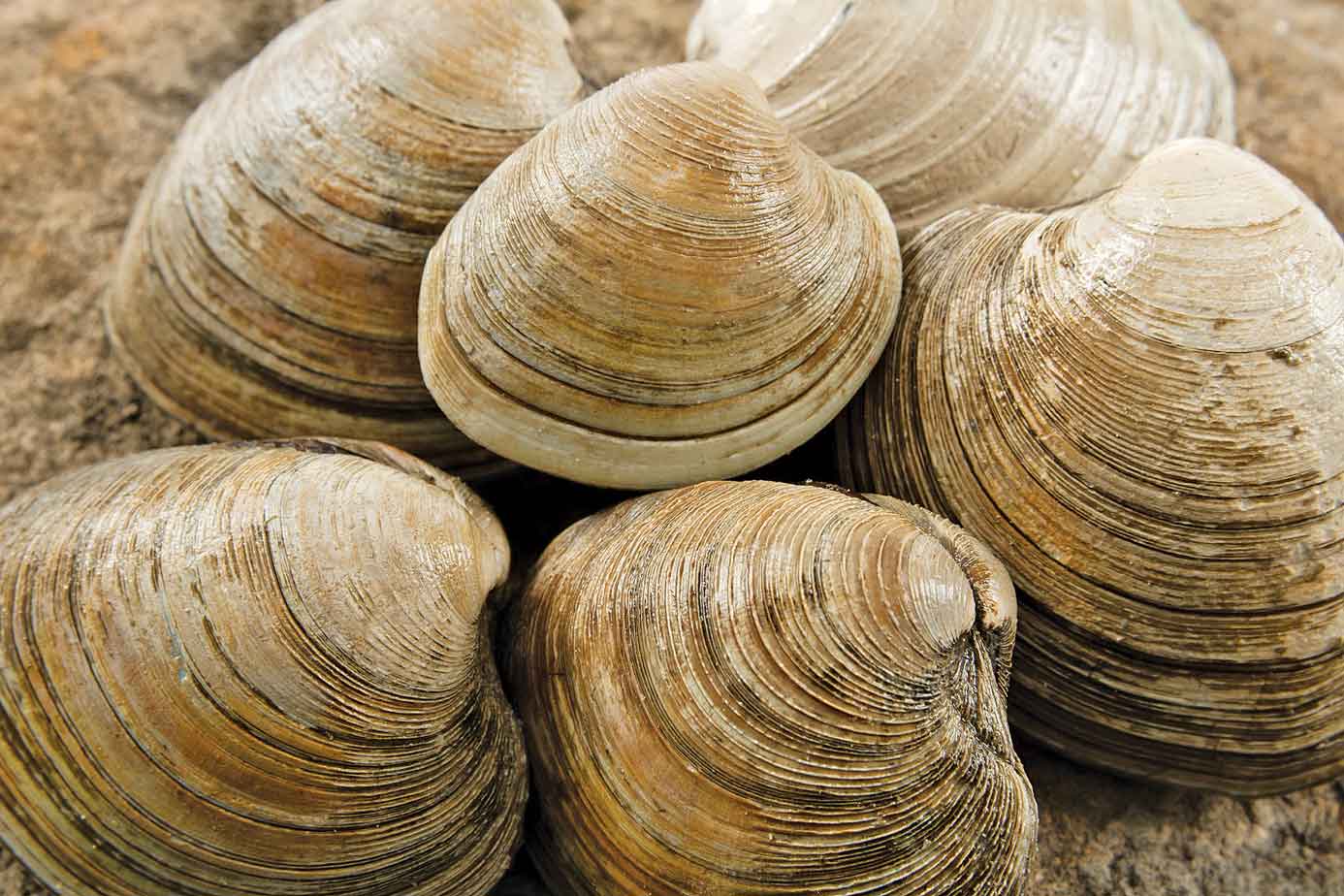 These unique scenarios, where land and sea merge themselves forming lakes and wetlands, create a microcosm of immense ecological value that allows the survival and reproduction of aquatic and marine species, such as lobster and some of the most important types of shrimp, along with crabs, oysters, clams, sábalo, mullet, catfish and sea bass. 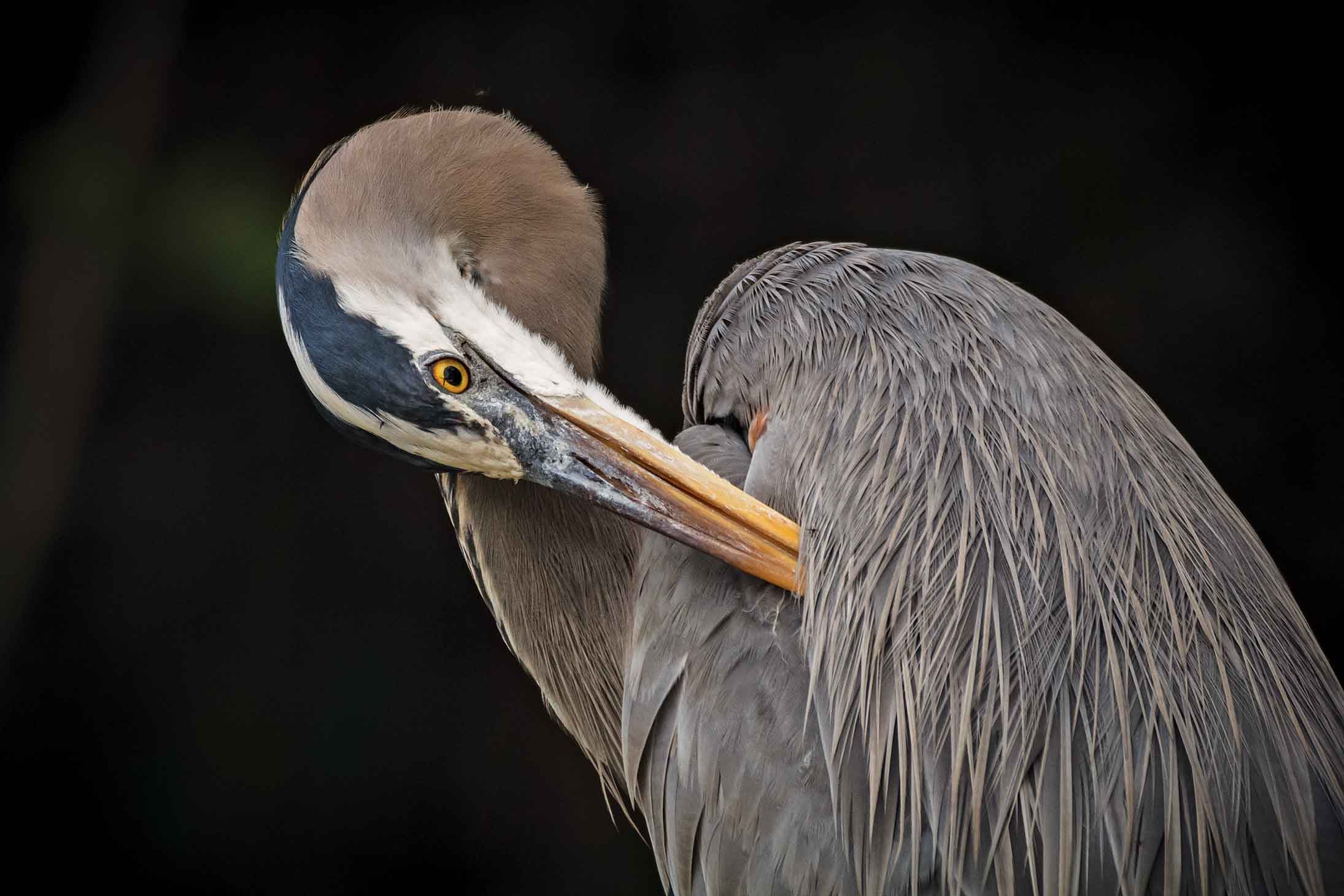 This ecosystem, which forms wonderful forests in the sea, also holds the presence of hundreds of species of resident and migratory birds, from the great blue heron to the colorful cerulean warbler, from the osprey to the little sparrow.

Simultaneously, it serves as a refuge for the traditional flamenco that paints the landscape in pink and contributes with its elegant presence to the creation of one of the most beautiful natural spectacles in the world. 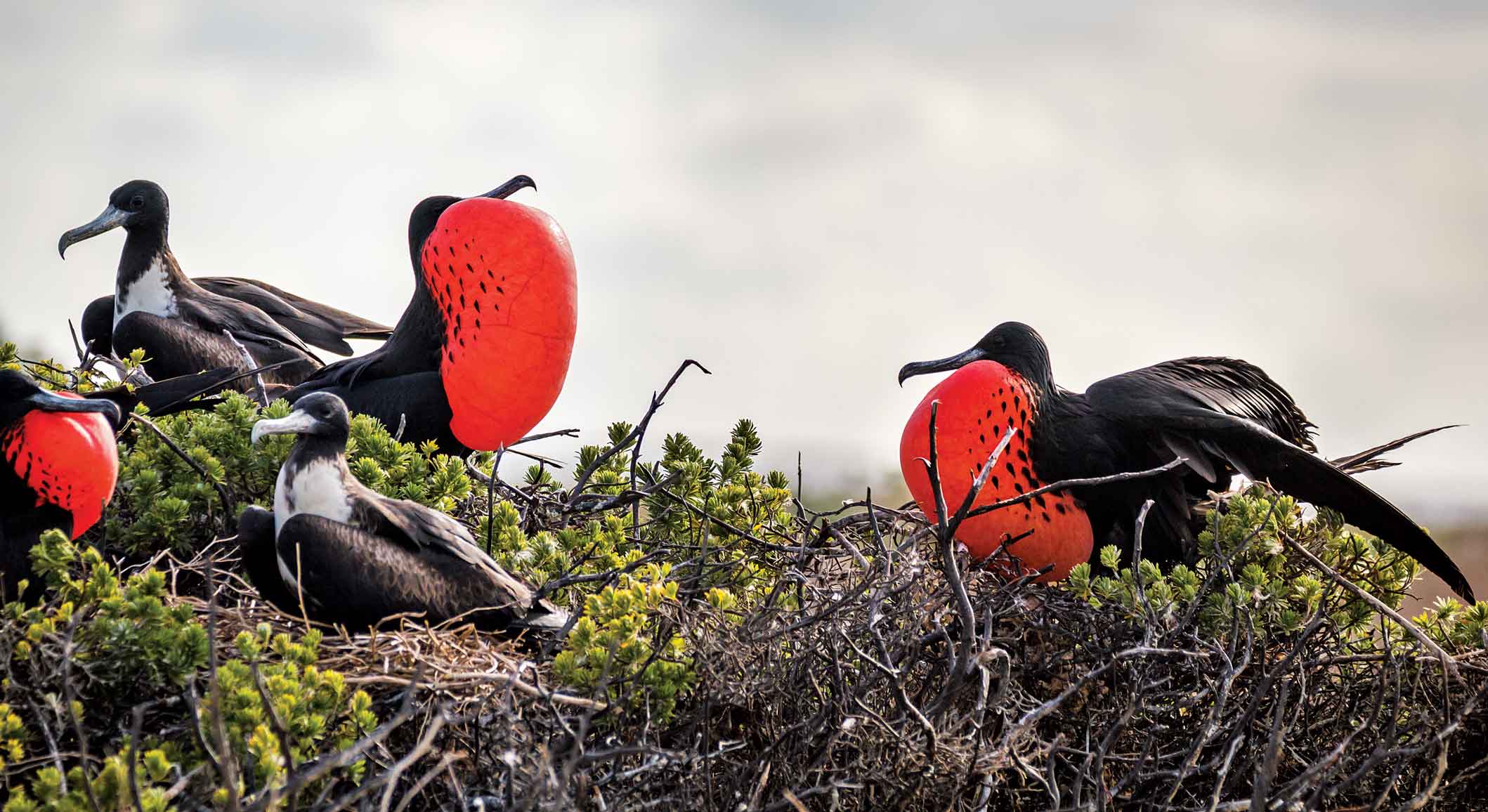 Magnificent frigatebrid
(Fregata magnificens)
The male is black with pointed wings and forked tail. In breeding season it inflates a bright red bump at the presence of the female, which is dark brown.
Photography: Patricia Cantón

In the same manner birds, fish, reptiles, insects, amphibians and mammals that live in the littoral flood with color and sound this landscape, making it a space of biological richness and beauty, constantly renewing itself.

Ecosystems that inhabit the coastal lagoons are very diverse: from freshwater swamps flooded of reeds and tulle, which receive thousands of aquatic birds (mallard, black-bellied whistling duck and grey heron); to calm deep waters, where they proliferate shellfish, fish and reptiles.

Mangroves also provide food and shelter to a complex web of aquatic organisms, as well as a multitude of insects and lizards. 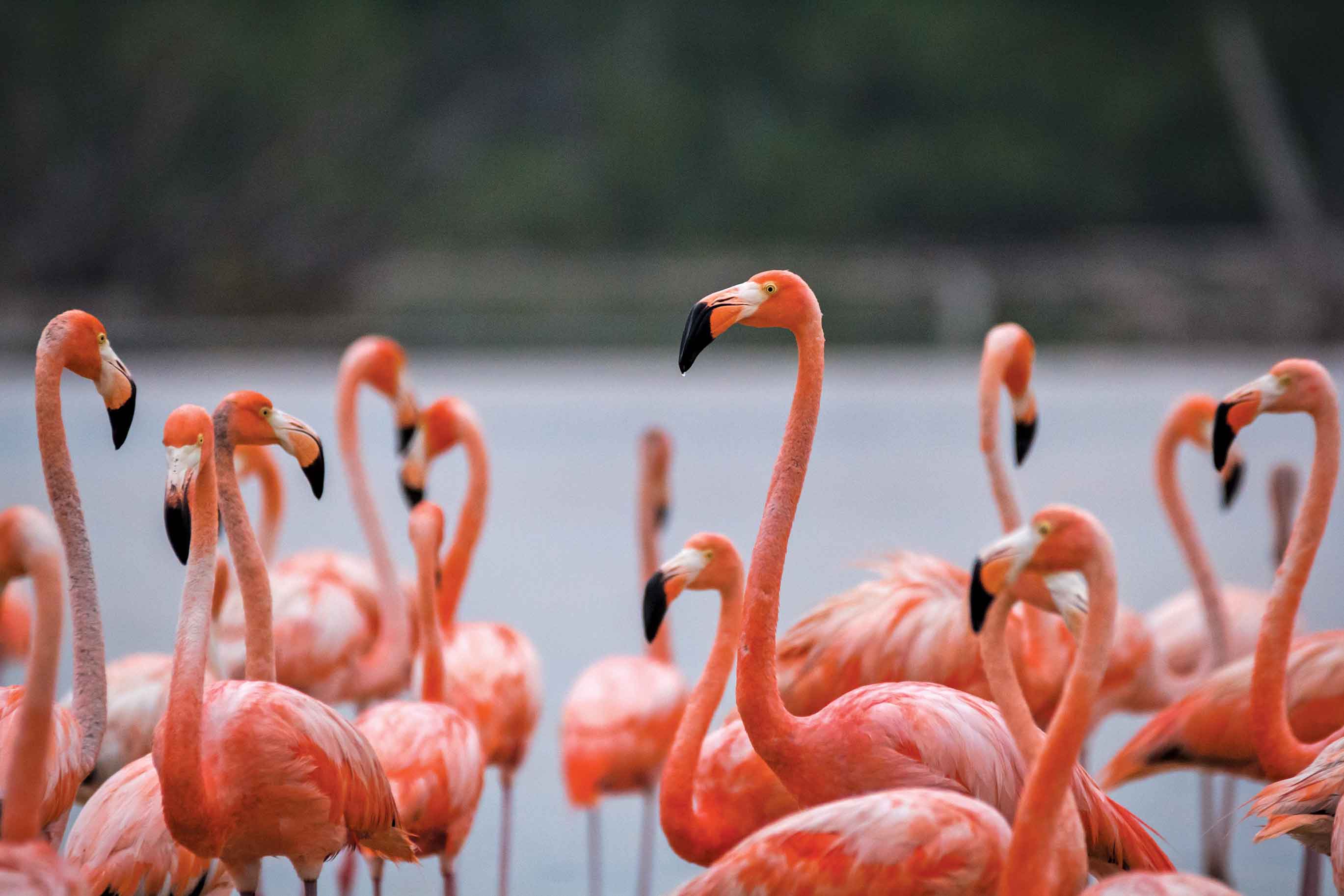 “Birds, fish, reptiles, insects, amphibians and mammals that live in the littoral flood with color and sound this landscape, making it a space of biological richness and beauty that is constantly renewing itself.”

The swamp crocodile and the hawksbill turtle are other examples of coastal fauna that can be found.

At the sea it can be seen, besides an impressive display of fish variety, rough-toothed dolphins and even some kinds of whales at certain times of the year. 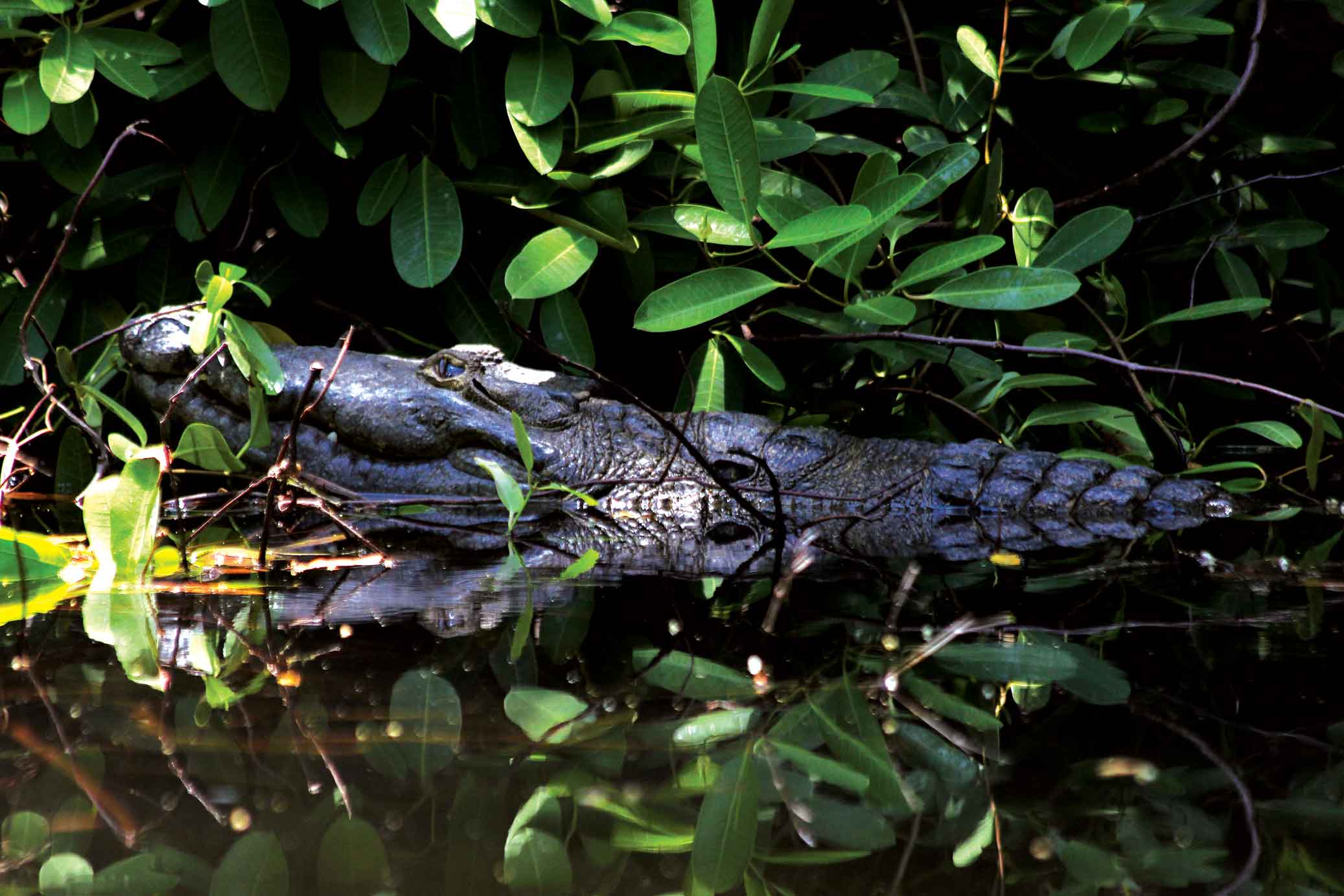 So, we can say that animals, regardless of their species, can become involved in the aesthetics of the landscape, modifying it to create their habitat and temporarily adding color, movement and sound to certain physical spaces. 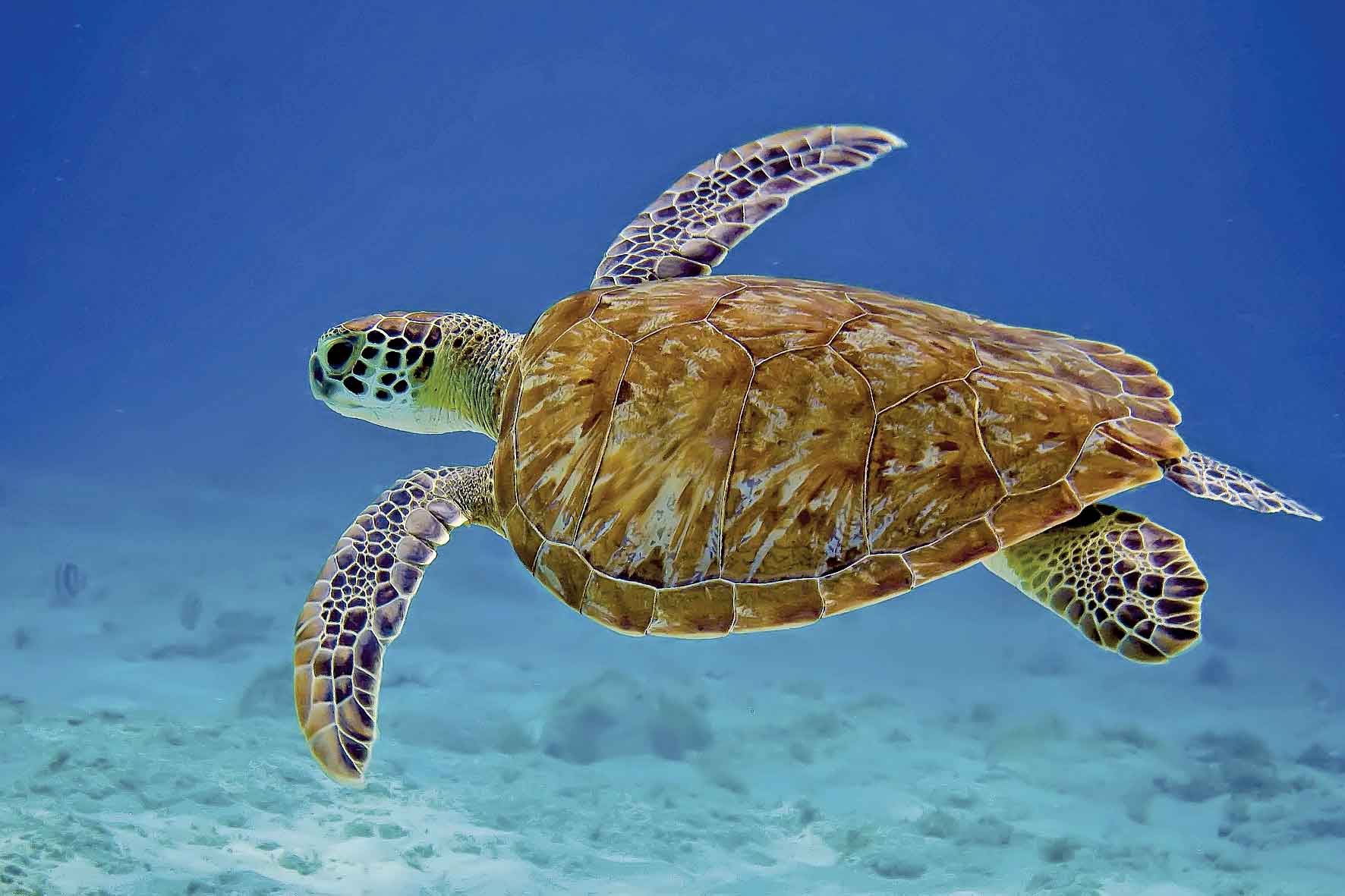 The birdsong, the chirping of insects, the fluorescent path of shoaling fish, the imposing texture of crocodiles and alligators, the brightness of Carey turtles and the colorful plumage of different birds in constant motion, are perceptible signs of the coastal landscape, and therefore, fundamental mosaic pieces that constitute the image of the littoral. 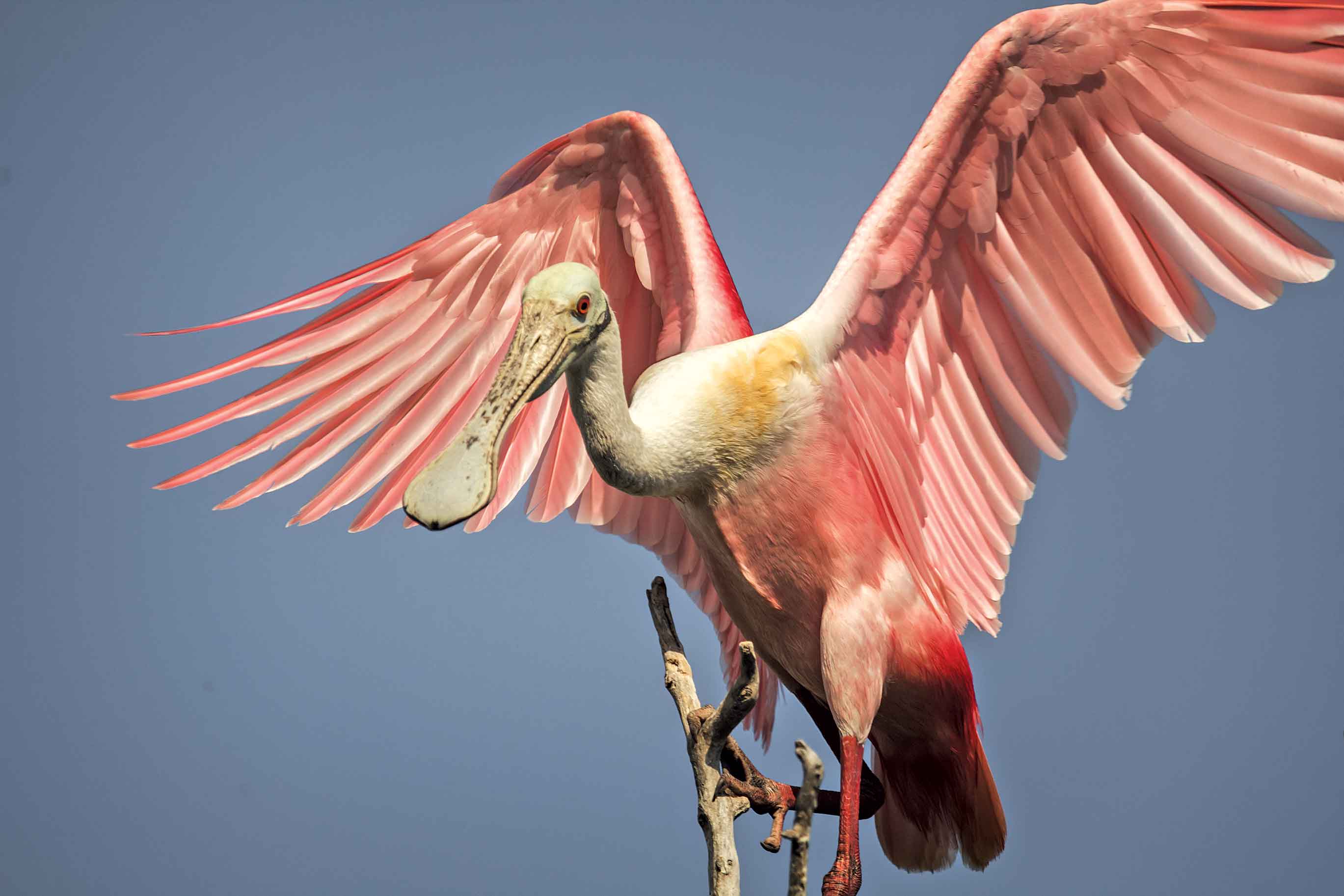 The coastal fauna in all its forms, aquatic, marine, amphibian, terrestrial and aerial; is inseparable from the coastal landscape iconography.

For this reason and accordingly to its ecological importance, fauna should have a more prominent place regarding its appreciation and interpretation.