The Mangroves: characterization and environmental services

The Mangroves: characterization and environmental services

They are considered areas of nourishment, shelter and growth of flora and fauna; they act as natural flood control systems, as barriers against hurricanes, control erosion protecting the coasts and improve water quality by acting as biofilters. They possess also high aesthetic, recreational and research value.

Despite being highly important, their worldwide extension has been reduced considerably. In Mexico mangroves have been mainly affected by the direct and indirect impact of agricultural, livestock, aquaculture, urban and tourist activities.

In order to have timely and accurate information on this subject, Dr. Eduardo Sampedro Batllori presents in this article the general characteristics and the most representative data of this ecological system.

With impressive precision makes a detailed description of the mangrove ecosystem, describes the characteristics and developmental trends of the coastal landscape, types and varieties of mangrove communities, the different physical structures where they can be found, the most representative mangrove species and the productivity of each, as well as the main factors that have caused their deterioration.

This is therefore, a rigorous written that allows us to delve into the knowledge and understanding of this ecosystem, vital for the survival and conservation of territories and species of flora and fauna of Mexico and the world. By Ivonne Walls 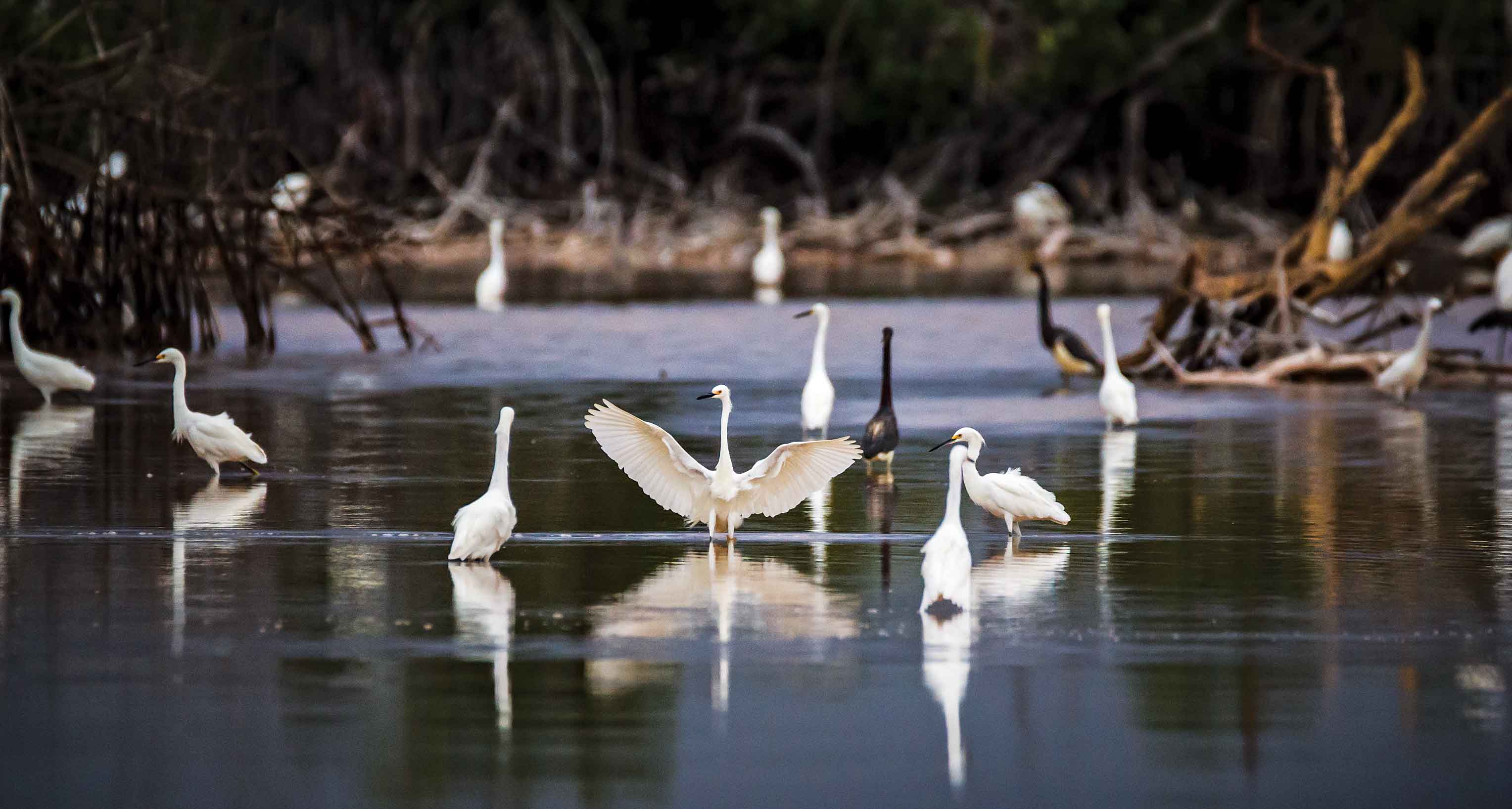 According to the Mangroves Mexican study, published by the National Commission for Knowledge and Use of Biodiversity in 2009 1, the Yucatan Peninsula contains 55% of the total area of mangroves in Mexico with 423,751 ha, of which the state Yucatan occupies 99,640 ha, mostly protected by federal and state decrees.

In the Yucatan Peninsula, mangroves are habitat for numerous species of animals such as crocodiles, manatees and many waterbird species like the pink flamingo, wood stork, pelican, roseate spoonbill, white ibis and several species of herons. Some of these species are considered endangered or threatened.

Similarly, for many species of fish and invertebrates of commercial value, mangroves are important as breeding areas; lobster, shrimp, and the snapper fish are in this group.

Based on the geological environment, climate regime and its hydrological and hydrogeological characteristics, and also the lack of variety of existing soil, vegetation formations and those anthropogenic factors 2 that influence and determine the current characteristics and development trends of the great coastal scenery, five main subtypes of landscapes can be distinguished: 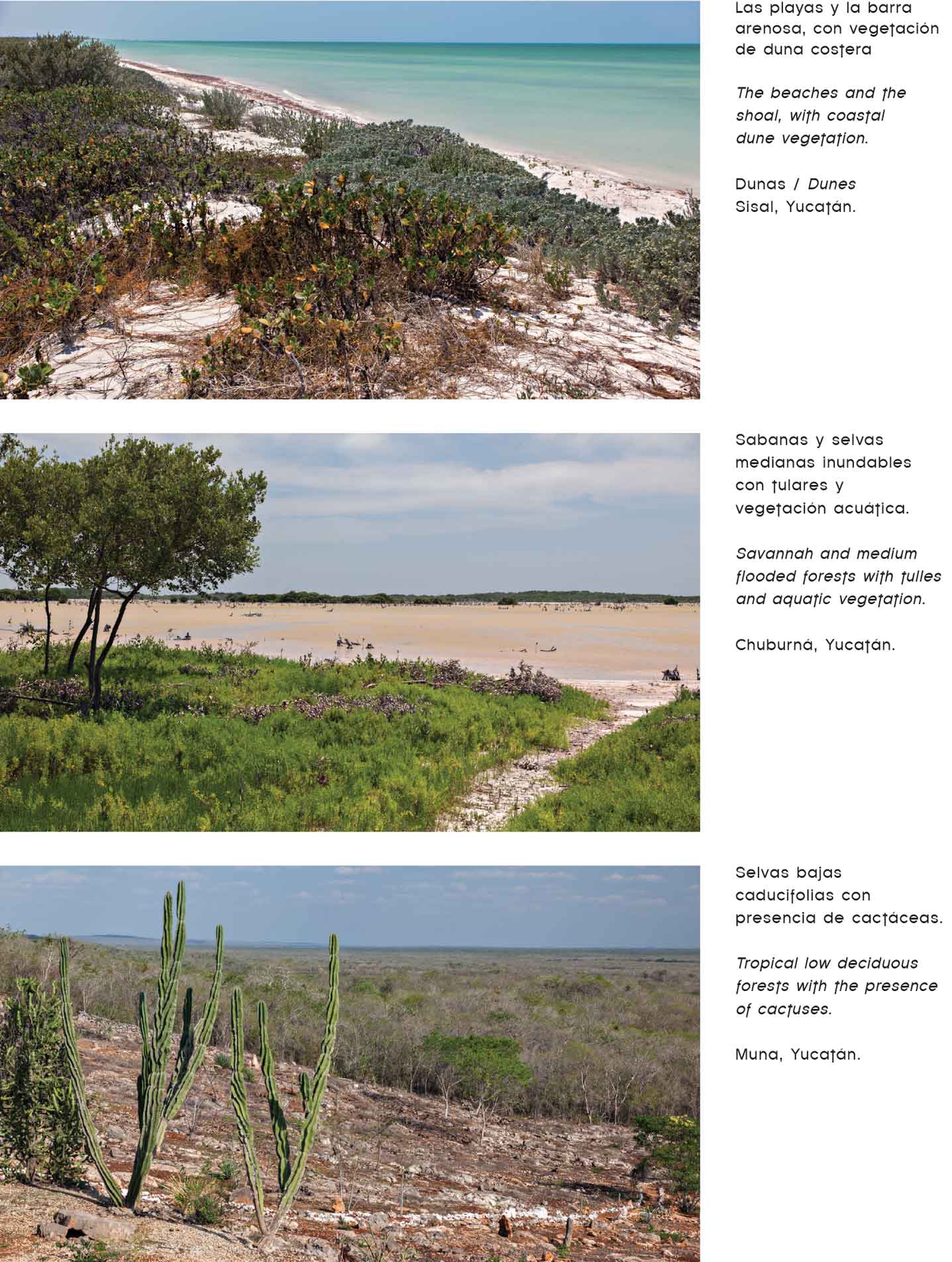 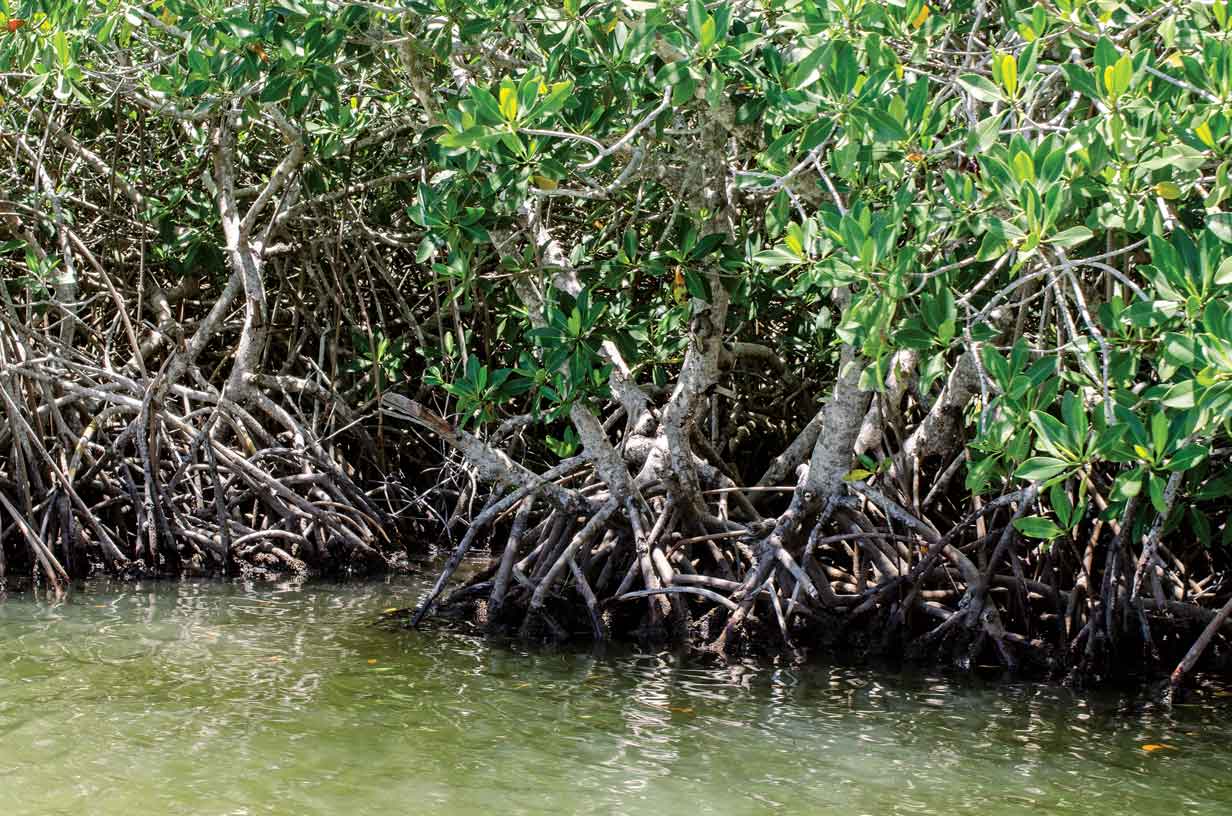 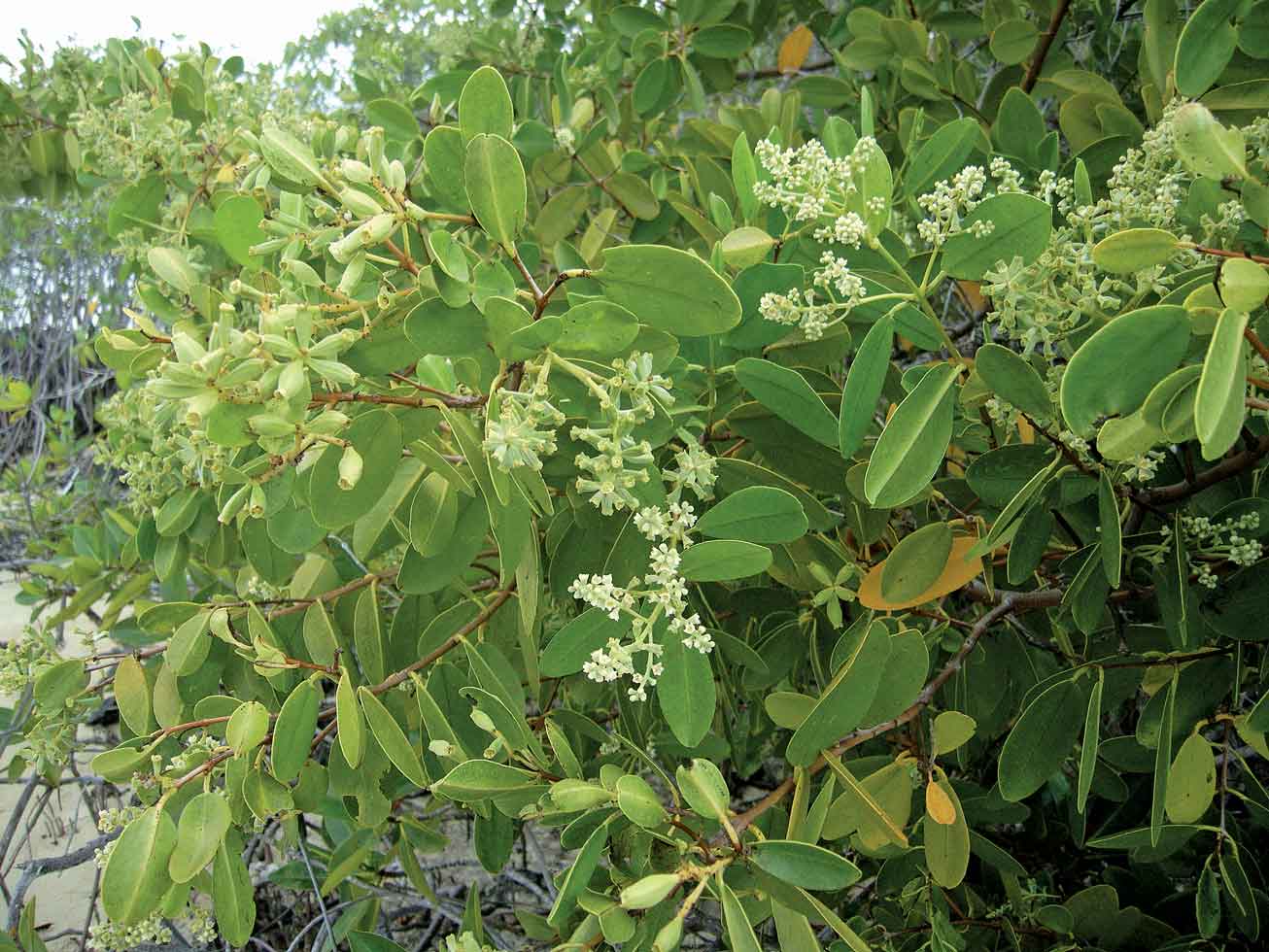 In particular mangroves are tropical tree species distinguished as viviparous, which tolerate high levels of salinity, present aerial roots and their tendency to scatter through water streams.

In the Yucatan Peninsula there are three mangrove species: Rhizophora mangle, Avicennia germinans and Laguncularia racemosa. Usually, Conocarpus erectus is included, although it doesn’t possess the characteristics of the other species, it is closely associated with them. 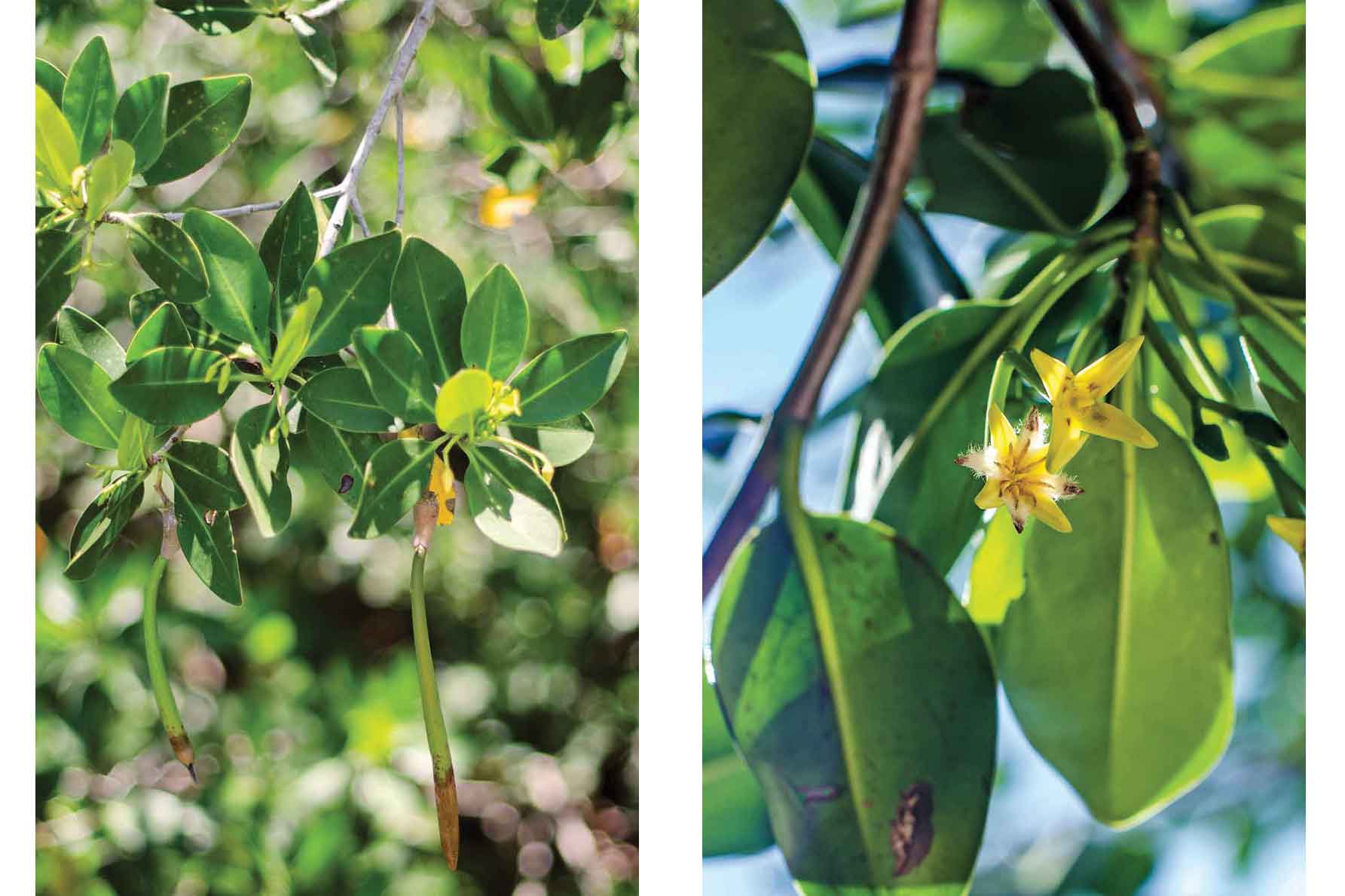 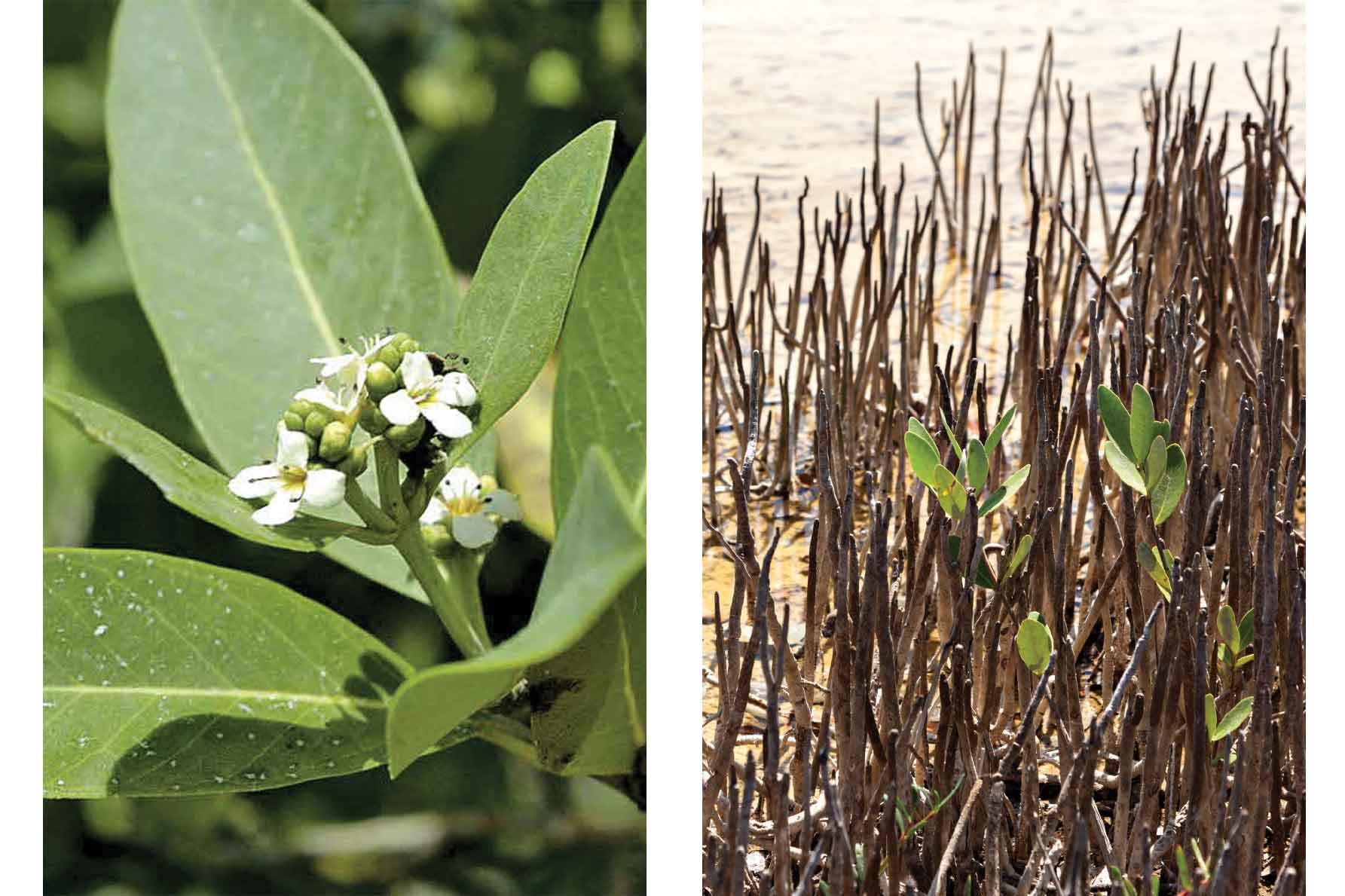 A wide variety of mangrove communities exist, as the result of the ability that such species possess to develop in environments with hydrological and diverse soil conditions.

According to Lugo and Snedaker 4, communities can be:

Marine, exposed to the open sea and, lagoon-like, along lagoons shores. Celestún, Yucatán. 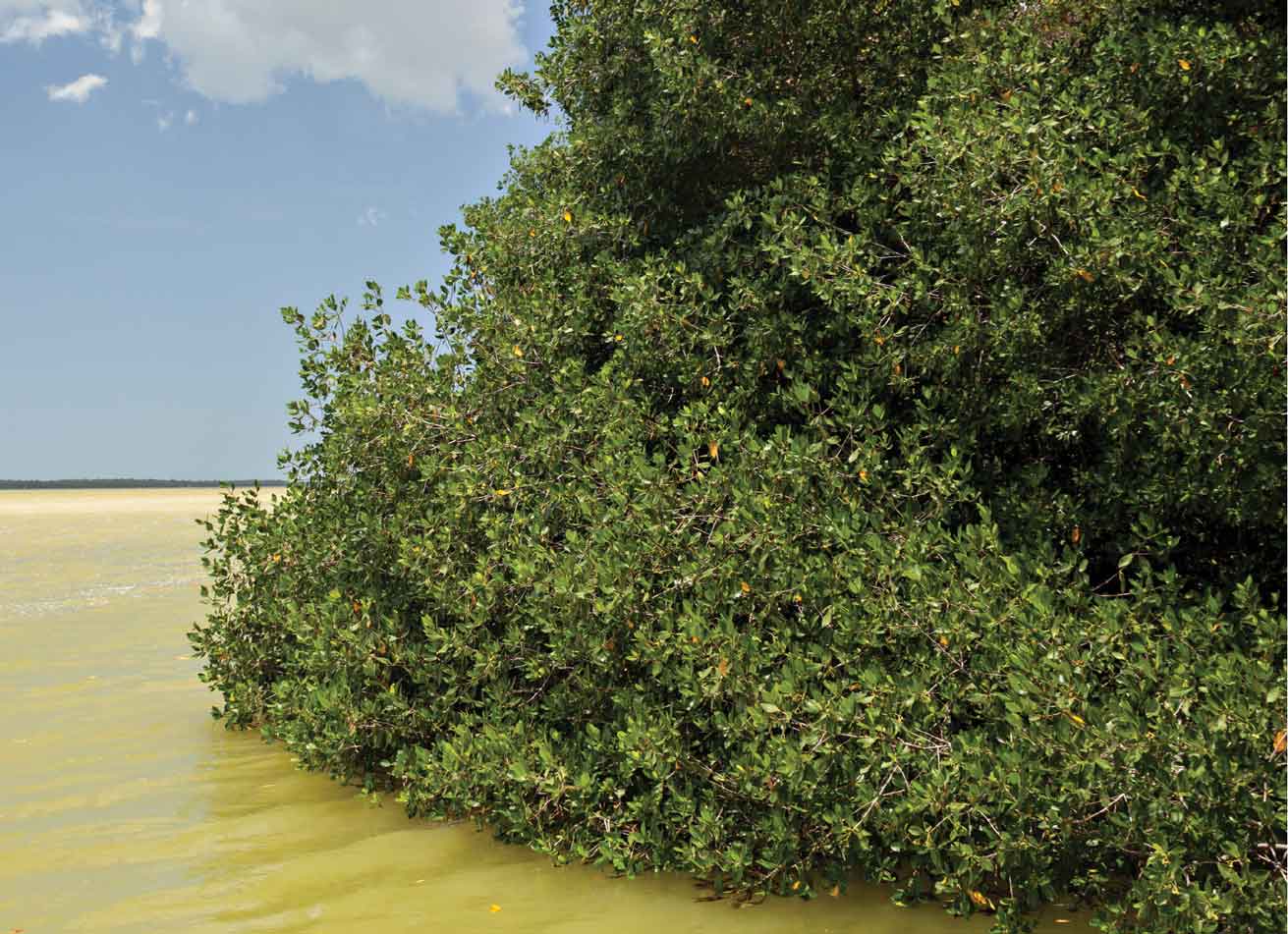 Associated to cenotes5 and rejolladas6. It develops with the presence of fresh water, completely disconnected from the influence of the sea and surrounded by low jungle (as in the case of Rancho Kana, 30 km from Celestun), or associated with inland lagoons (as in Chichankanab, Quintana Roo). 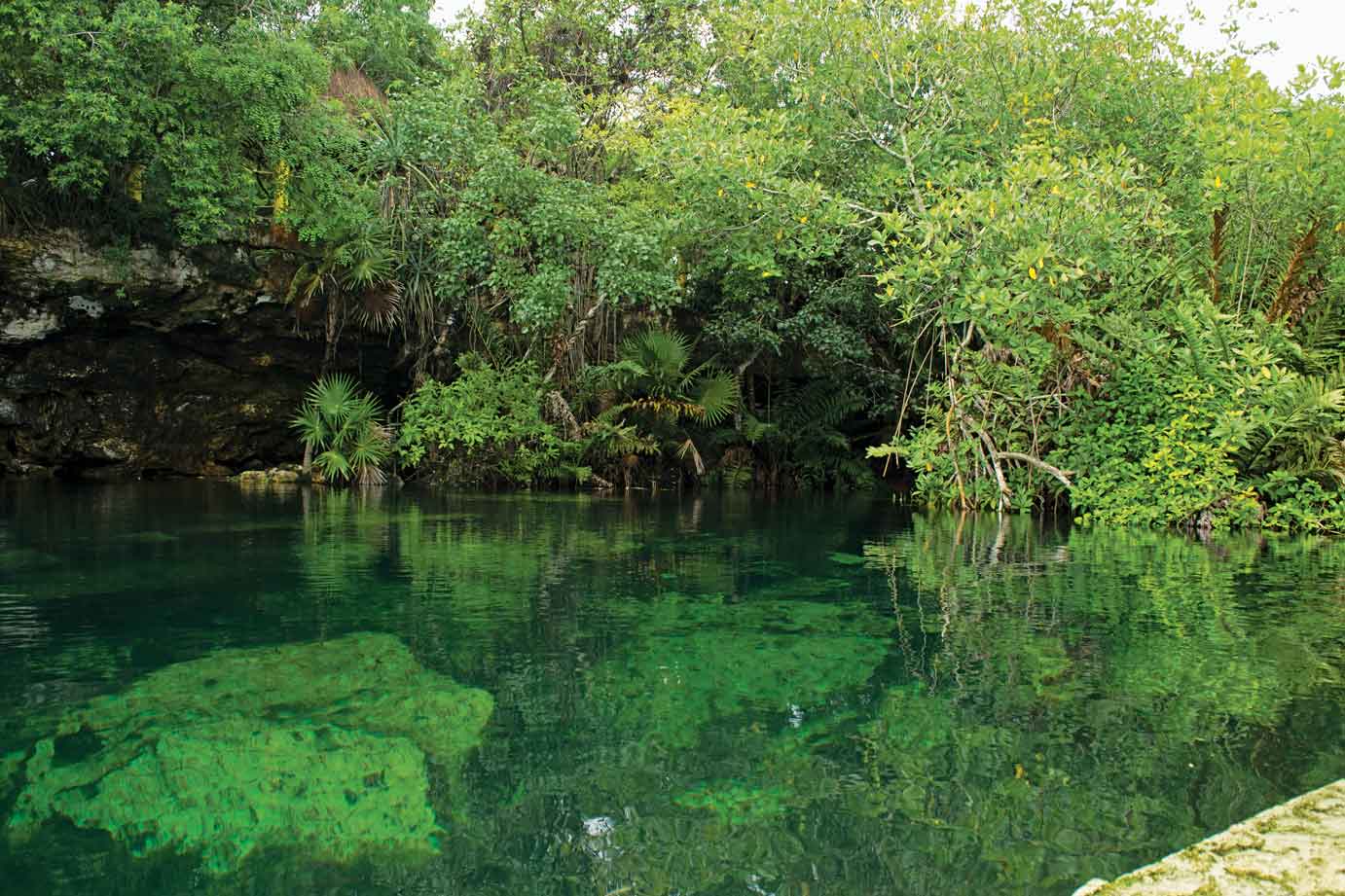 This community is not in the state of Yucatan, but it can be found in Champoton (Campeche) and Rio Hondo (Quintana Roo). It is located in the floodplain associated with rivers and are influenced by tidal effects. 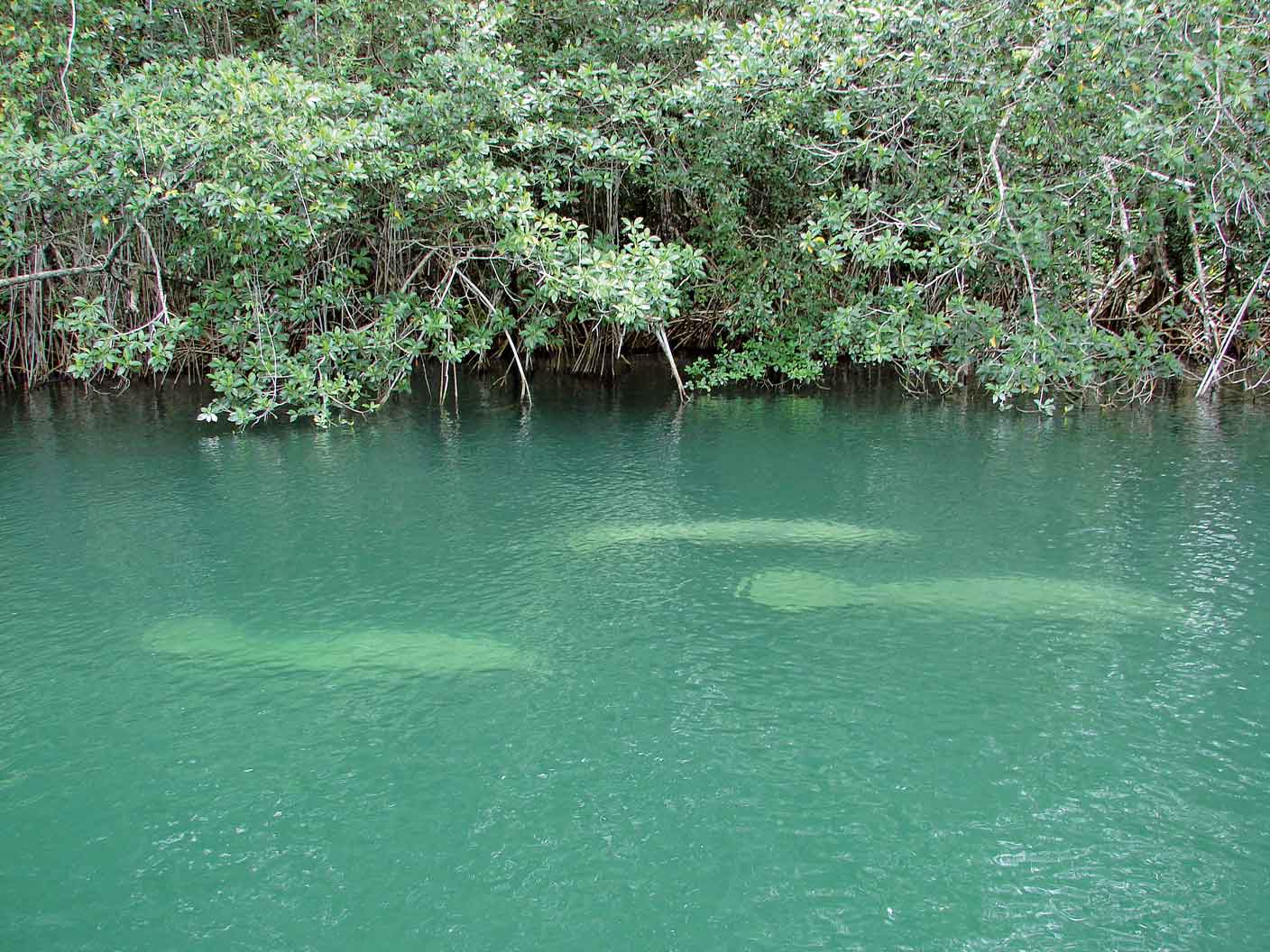 They exhibit their own soil characteristics, hydrology and topography. They are like islands of vegetation in the northern and western coast of Yucatan with fresh water outcrops. 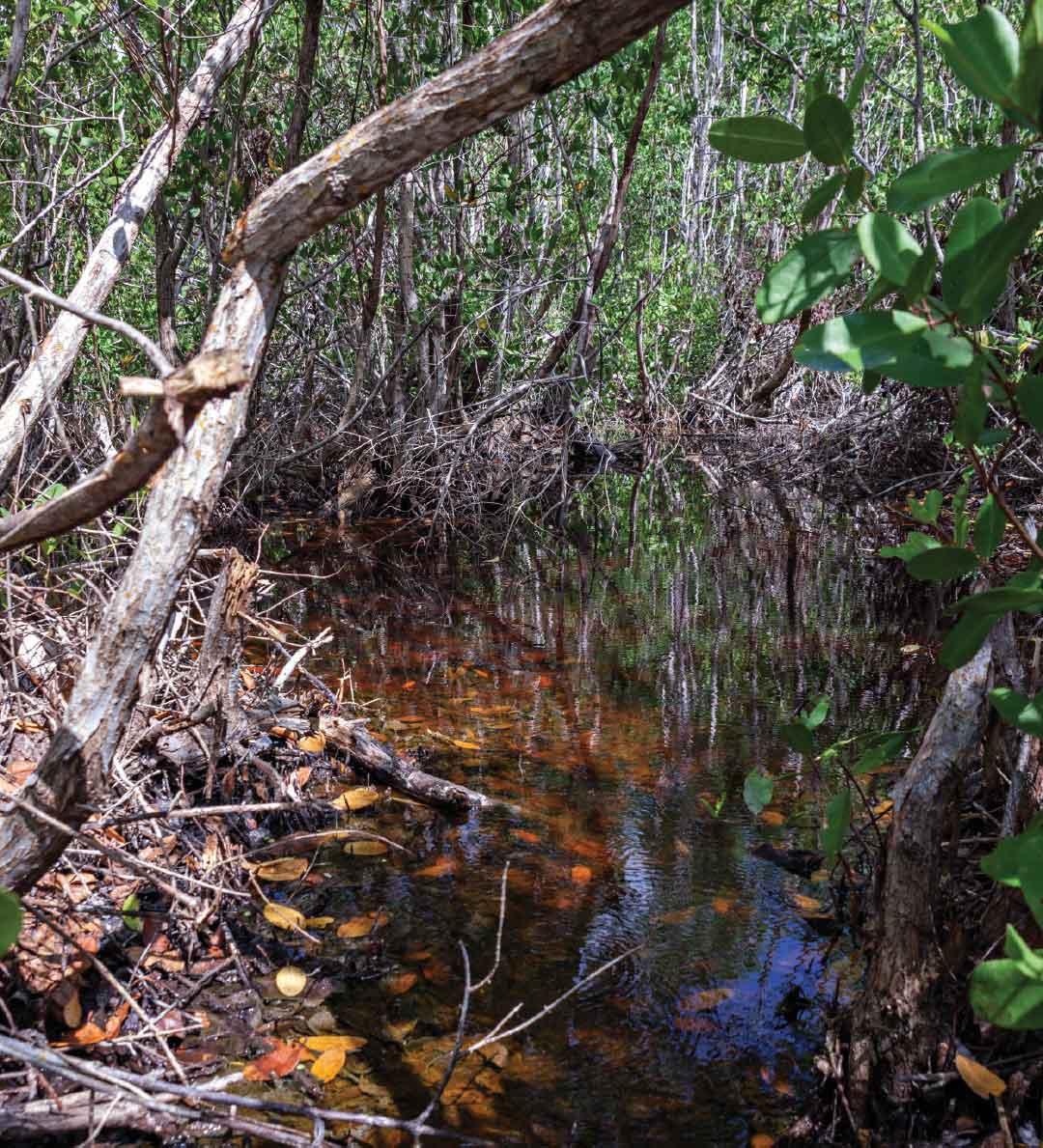 There are different kinds, check the table below. Low Marsh, Progreso, Yucatán 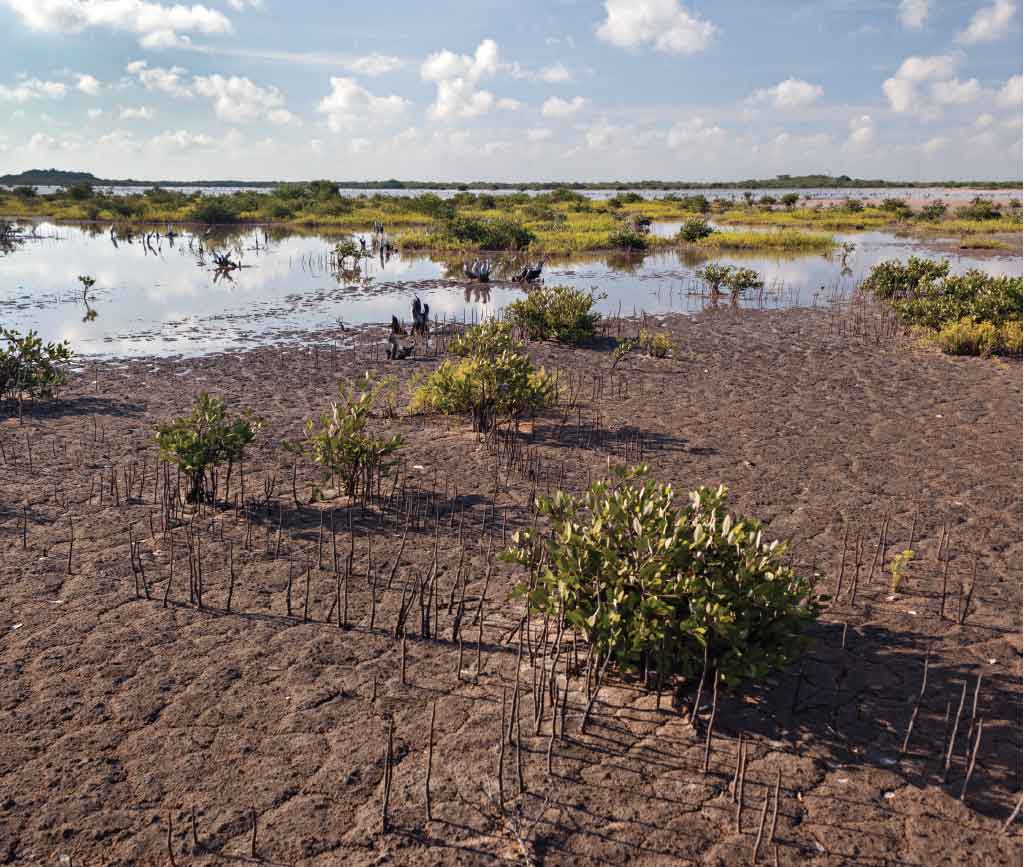 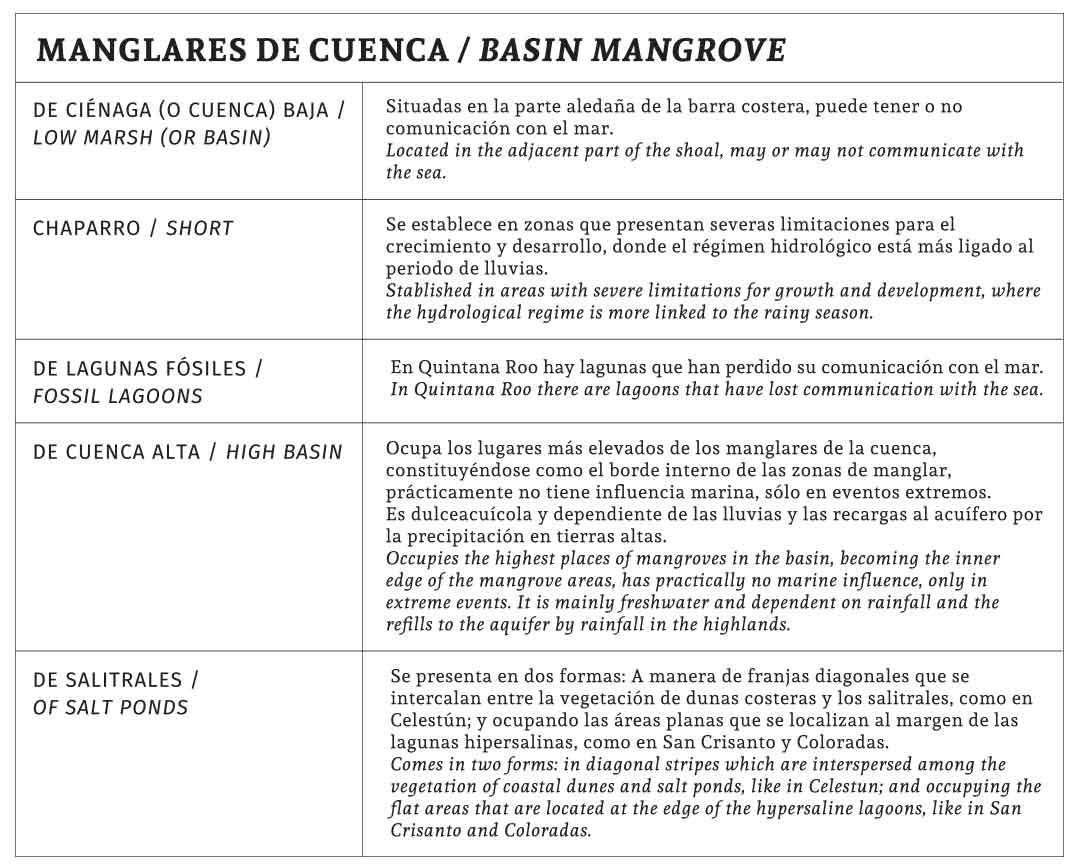 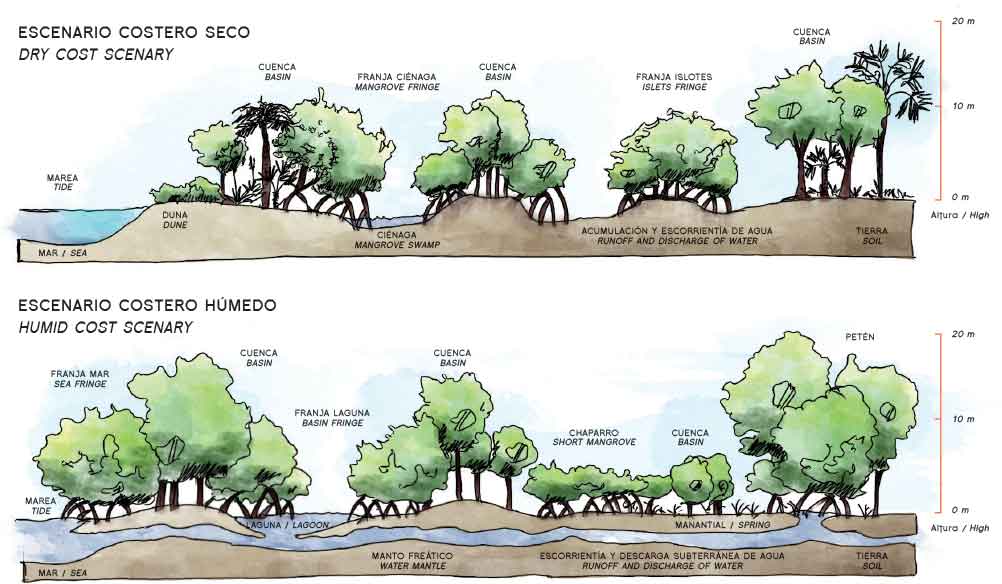 Moreover, the mangrove ecosystem in Yucatan, meaning the hydrological unit in which mangrove communities develop, is regulated by the coincidence between the topo-hydrologic forms with certain geological areas.

These hydro geomorphological structures, in the case of the Yucatan Peninsula, refer to: 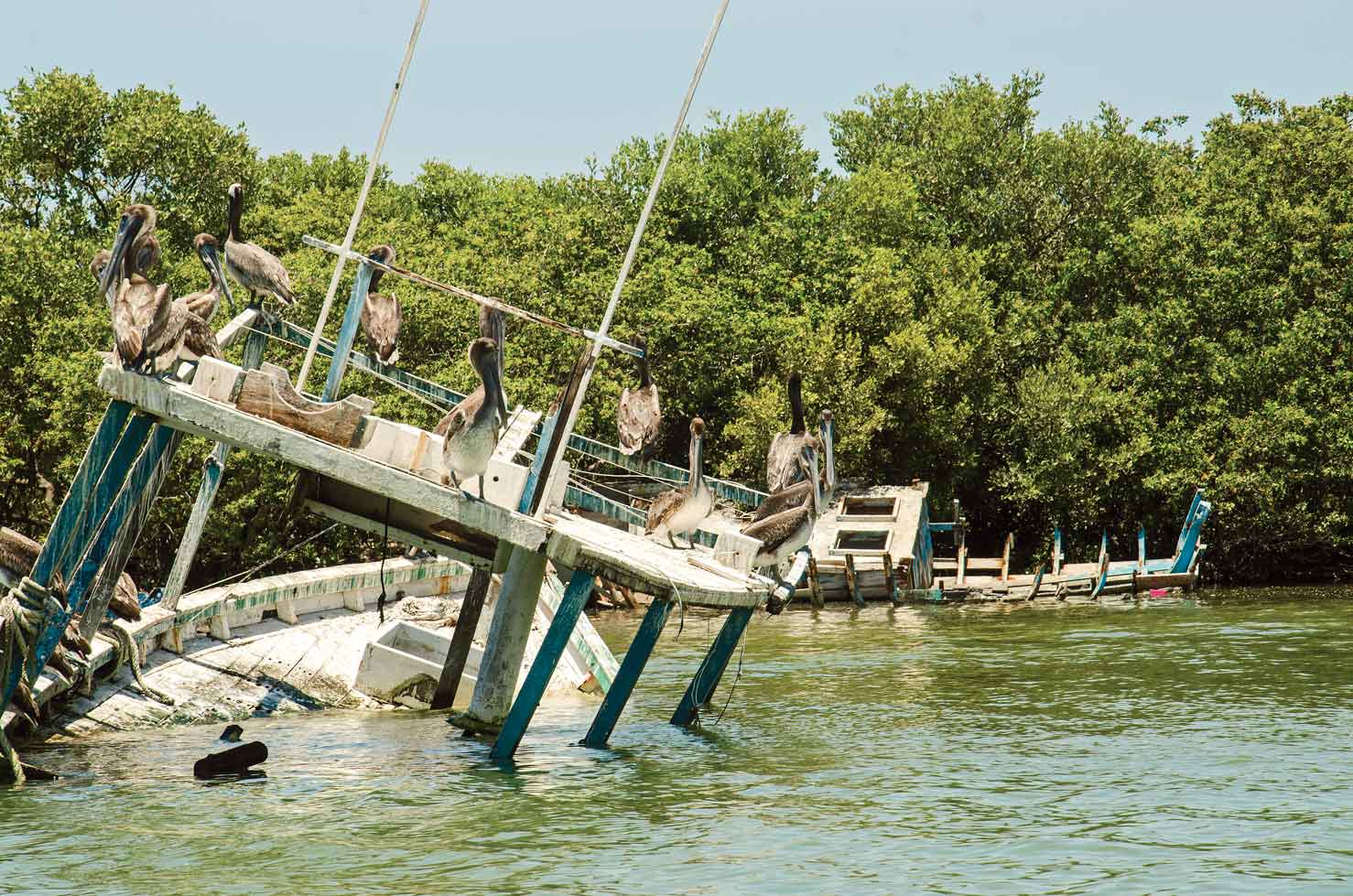 Tourism and urban development of the state of Yucatan, for the past 30 years has had a negative effect on the state of conservation of mangroves.

Roads built without considering water flows that feed the mangroves, construction of harbors and ports, urban development, livestock and natural phenomena, such as hurricanes, have damaged and/or destroyed, sometimes irreversibly, these habitats in Yucatan.

The protection these areas can provide, especially in the case of natural disasters and the fact that they are habitat for many animal species and their contribution to the biological productivity of the coastal zone, are reasons enough to promote their protection and conservation.

3  Physical, chemical and biological conditions of the soil.

5  Cenote, from the Mayan word Dzonot, the scientific term is sinkhole. Underground cavities product of the weathering or dissolution of the stone, phenomenon also known as “karst”.