Nine landscape architects propose to build alliances between costal communities and landscapes, contributing to their preservation through an intervention master plan.

The coastal area of the Yucatan Peninsula has great attractions for local residents and tourism in general. Within this area, the landscape of mangrove occupies a privileged place among the ecosystems, due to its natural richness and the environmental services it provides.

On the north coast, we can find significant archaeological sites with great landscape, historical and cultural potential.

This coastal area also presents very important issues: the loss of coastal habitat and its biodiversity, caused by the increasing number of inhabitants of the zone, and the associated unsustainable land uses; as well as the invasion and contamination of mangroves, which are often improperly categorized as residual spaces.

In this scenario nine Landscape Architects came together to elaborate a common proposal2 to intervene and transform the coastline of 137 km. that goes from Progreso to Telchac Puerto, which includes the communities of Chicxulub and Ixil, and the archaeological site of X’Cambó.

This zone, a state reserve recently established, is considered biologically relevant by CONABIO, who also has highlighted the need for ecological rehabilitation of the area.

Master plan of the Yucatan coast thatgoes from Progreso to Telchac Puerto, which Includes the communities of Chicxulub and Ixil, and the archaeological site of X’Cambó.

By analyzing the dynamic relationships between the natural environment (geology, hydrology, edaphology, plant cover and fauna) and human settlements with all their implications (agricultural affectations, villages, summer housing, archaeological ruins, quarries and industries) we were able to establish landscape units, that were the basis to establish six main lines of action, presented on the next pages. 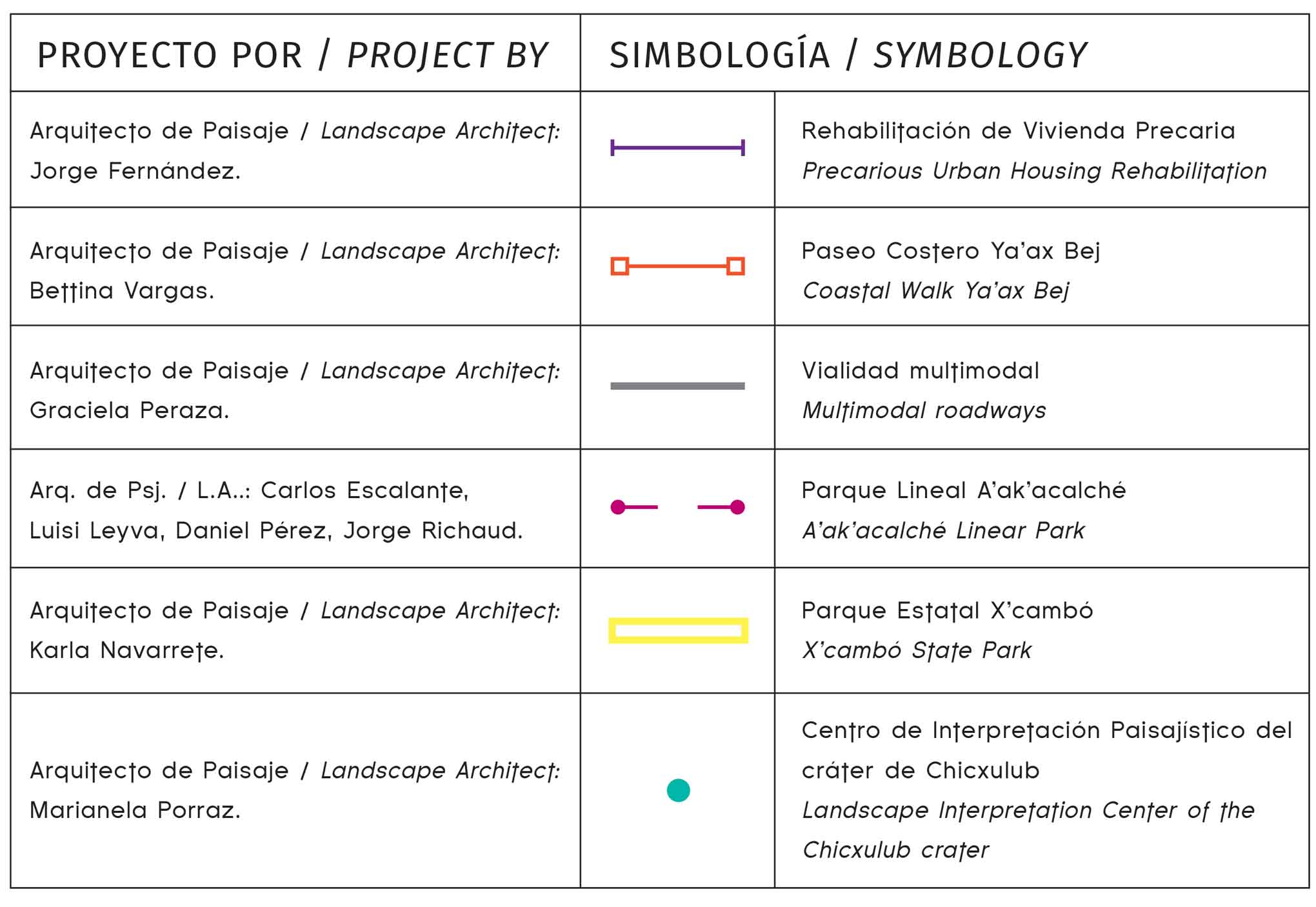 Solves an urgent issue in the short term. 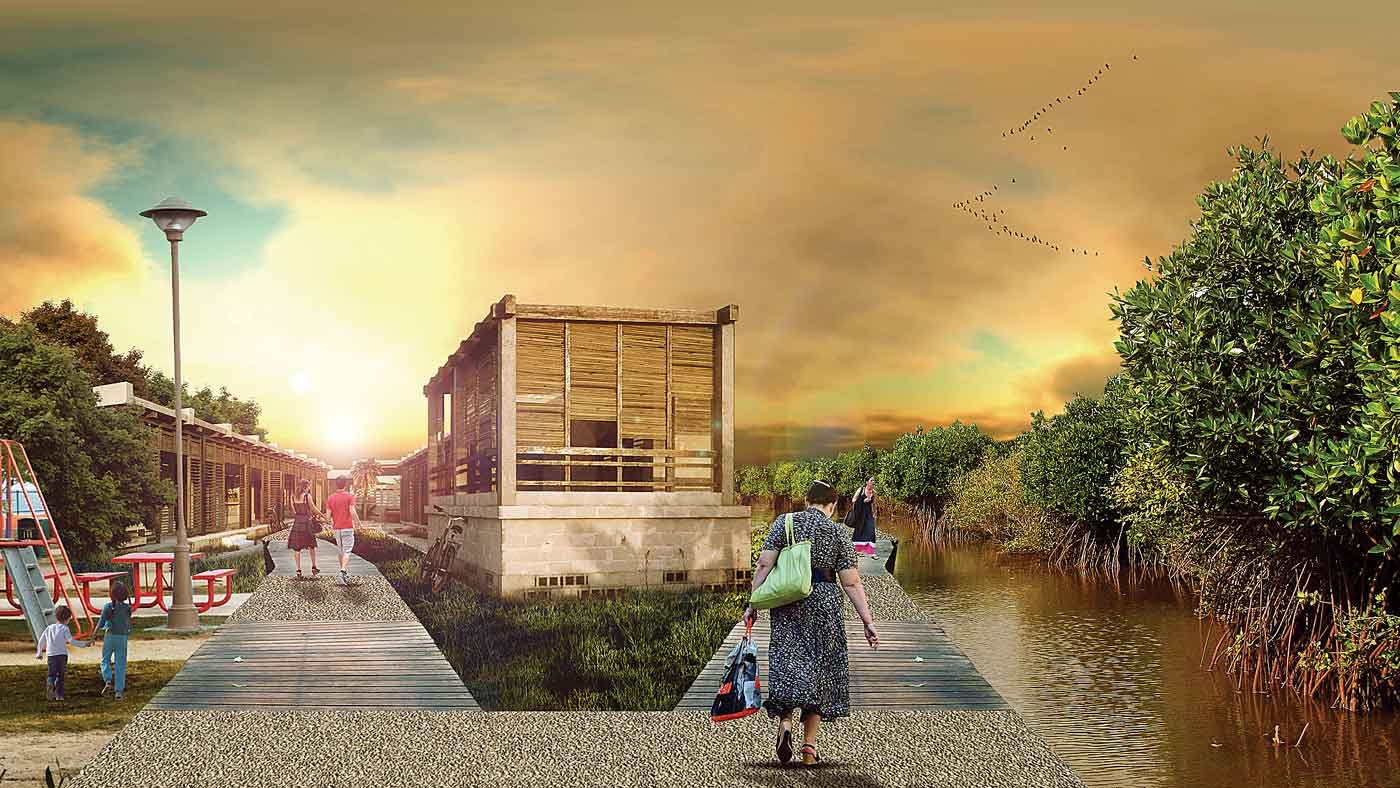 Urban Housing. Project prototype of urbanization includes proper low-cost housing, coupled with an equipment of public spaces and a reforestation proposal. Is a priority project, because it solves an urgent problem in the short term. 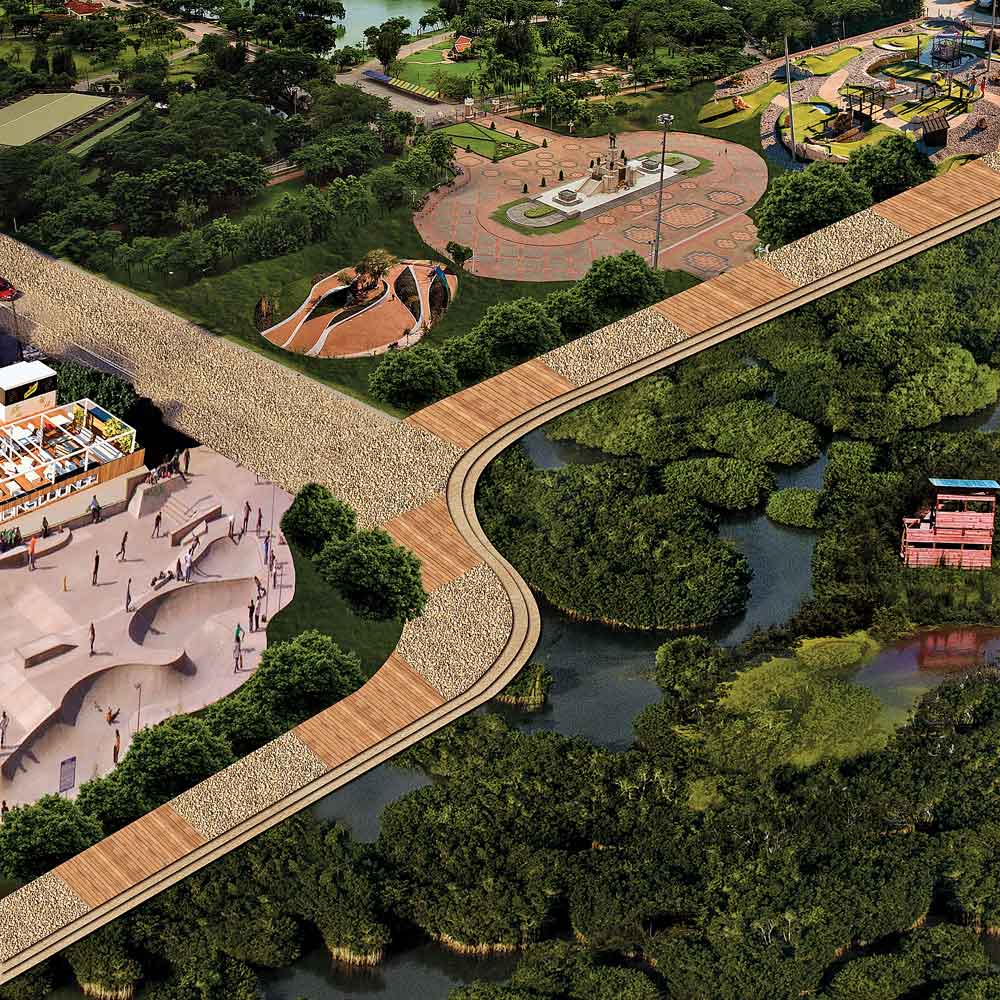 Aerial view of reforested zone and equipped with recreational areas, walkers and other complementary services for the residents.
Render: Daniel Pérez 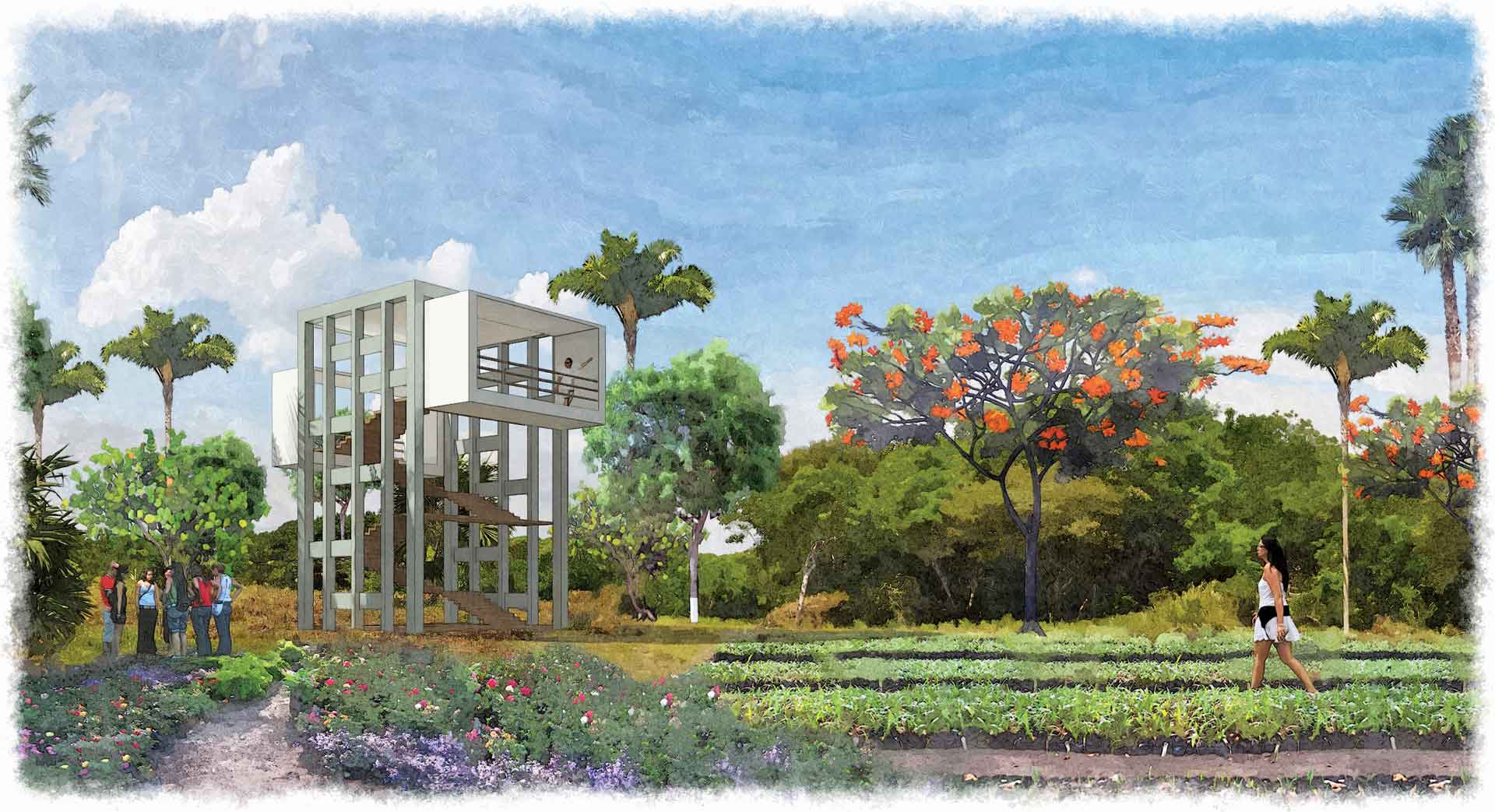 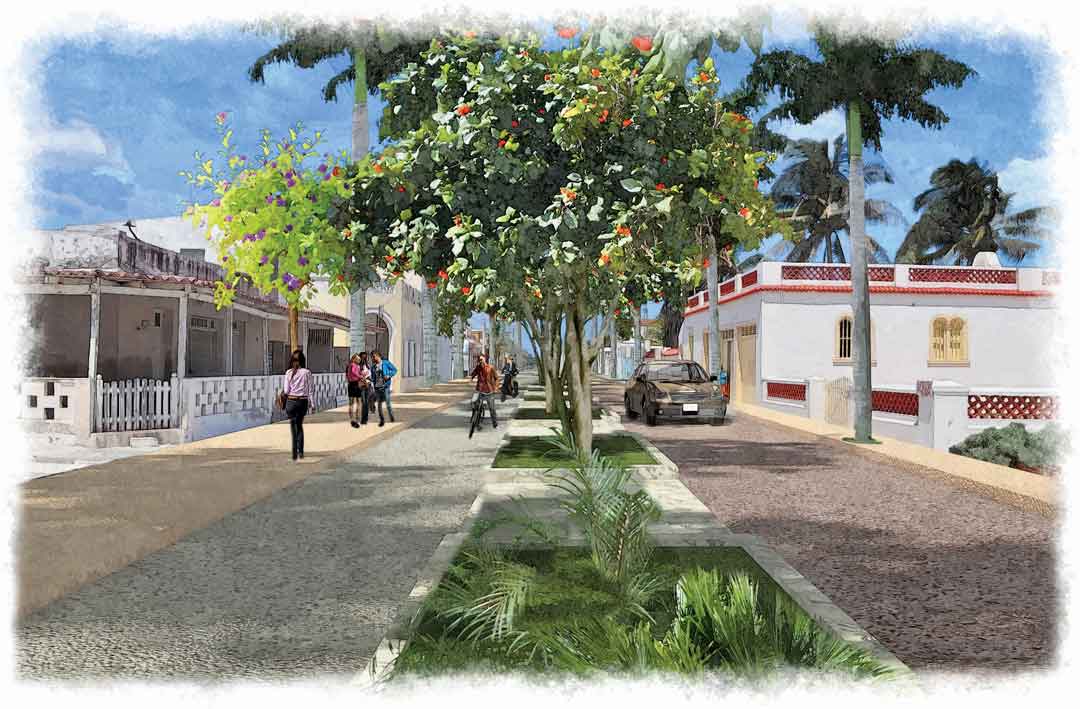 Green link between the ports of Progreso and Chicxulub, and their respective connection to the Mangrove, which objective is to generate a wooded area and passable public space, that dignifies the people of the second and third row, providing also better roads for pedestrians and cyclists. 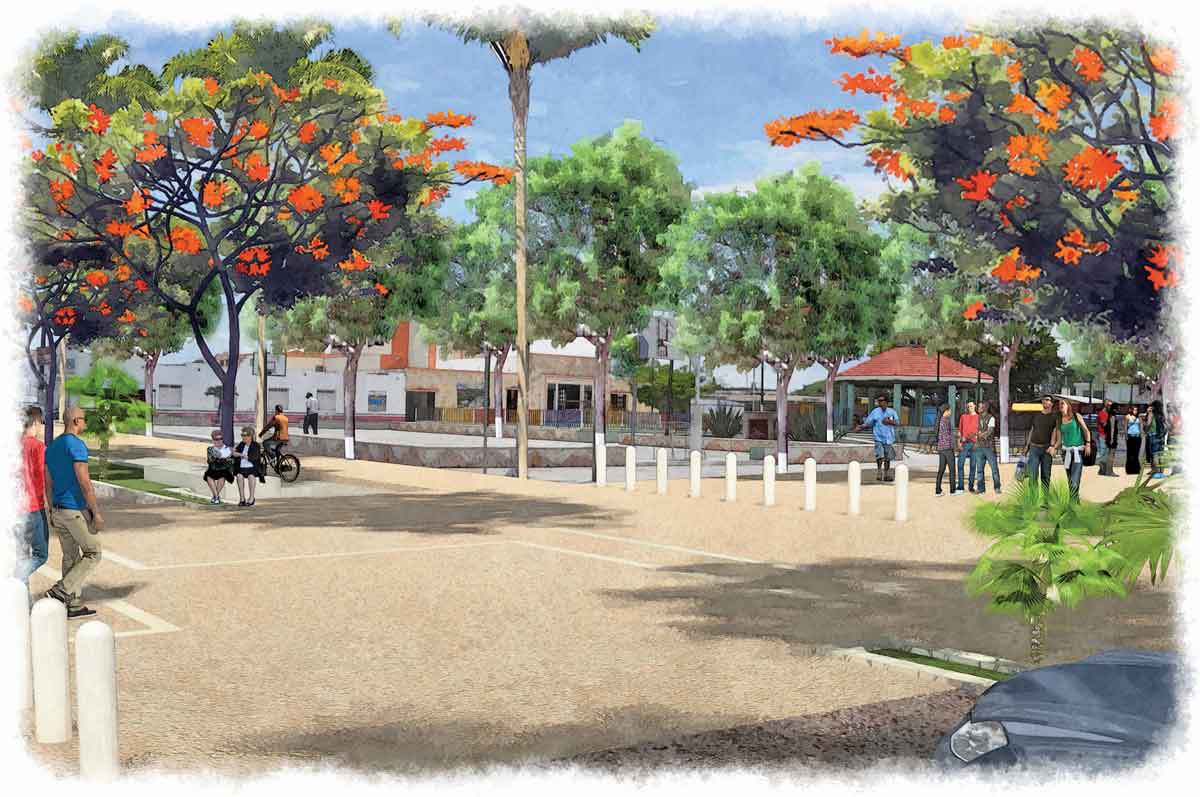 Project which aims to communicate the coastal towns and points of interest in the area through different alternatives of mobility, giving emphasis to those sustainable alternatives (buses and bicycles), as well as to the creation of nodes for the exchange of mobility type. 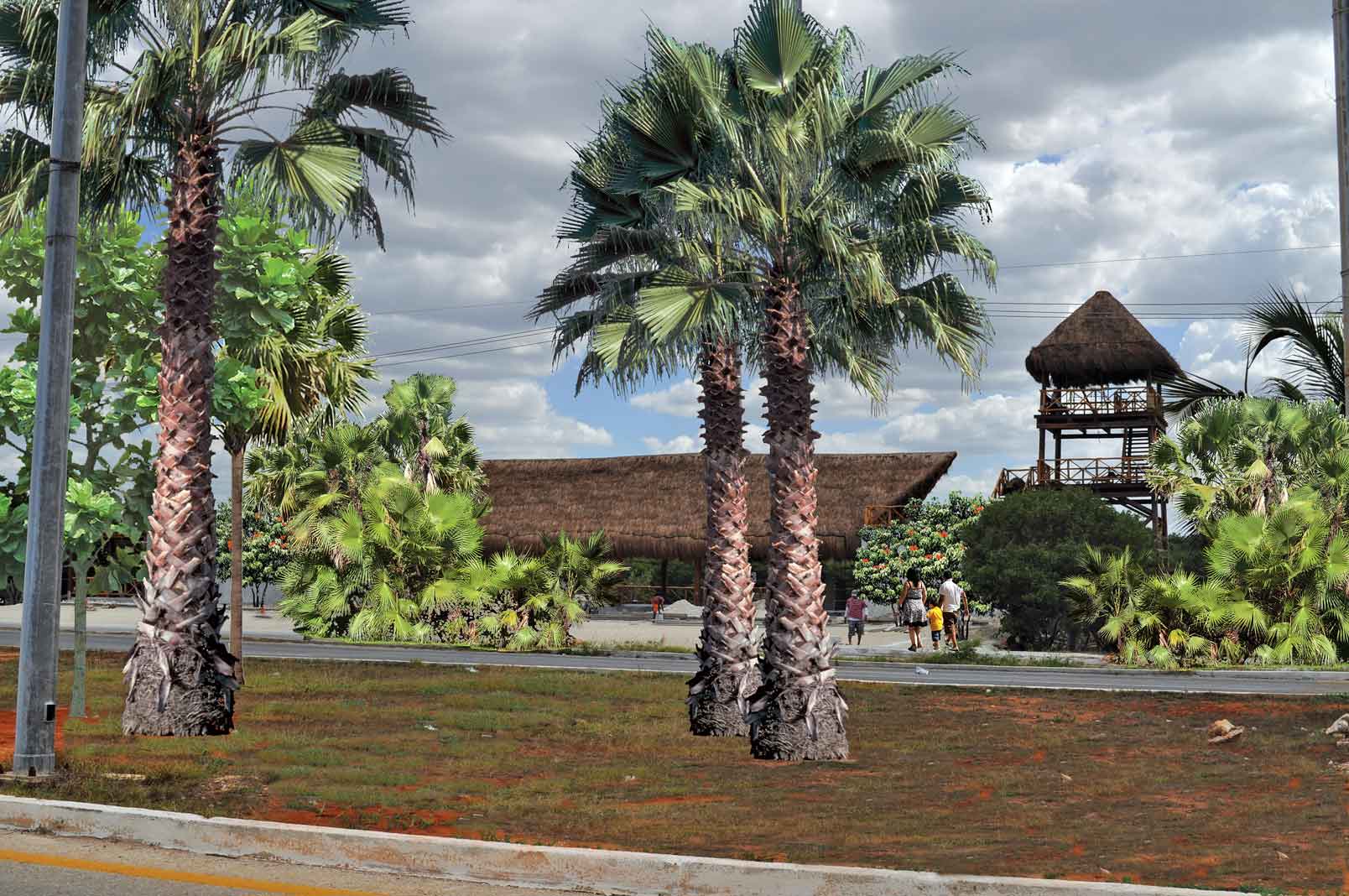 Meeting point between the sea and the wetland, inspired by the petrified mangrove woods. Render: Graciela Peraza 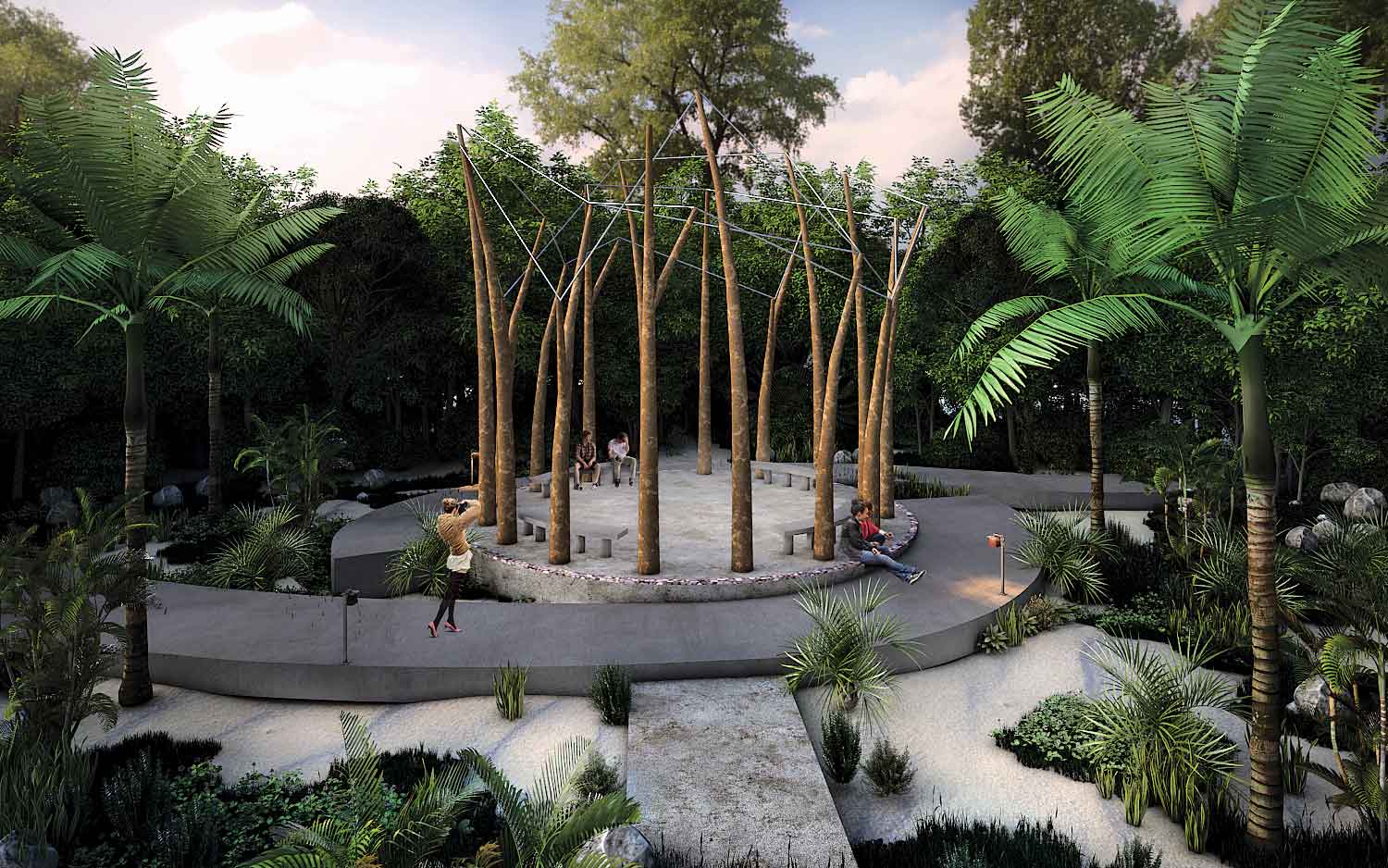 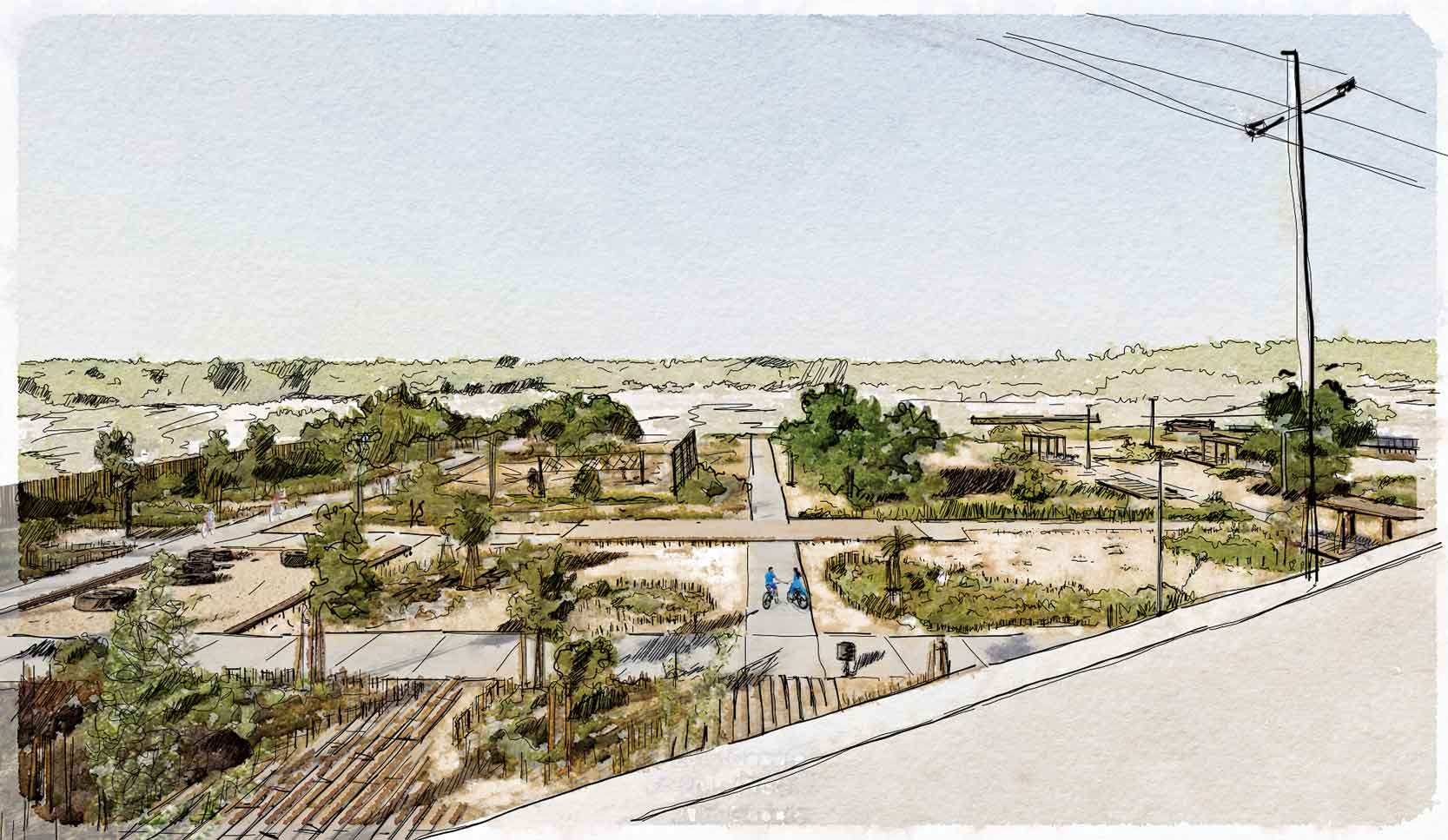 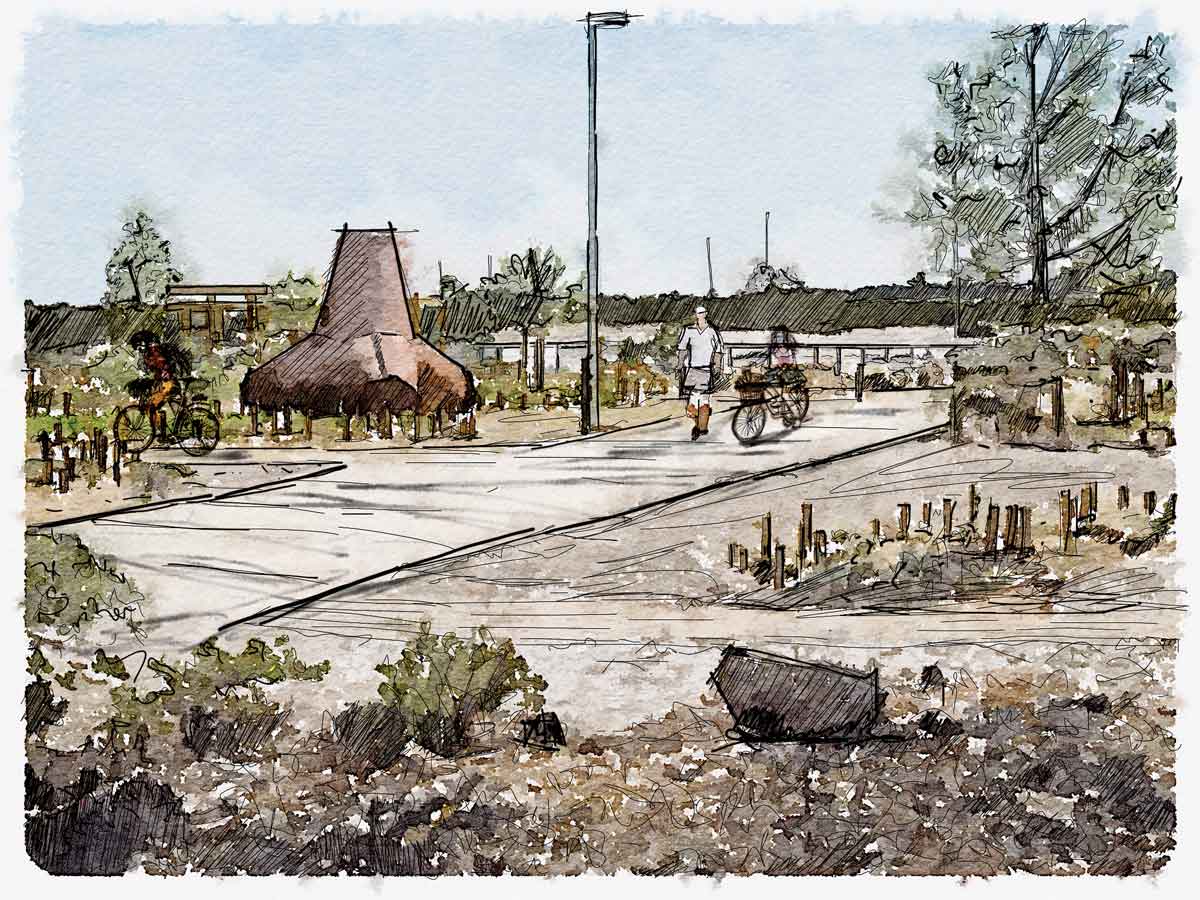 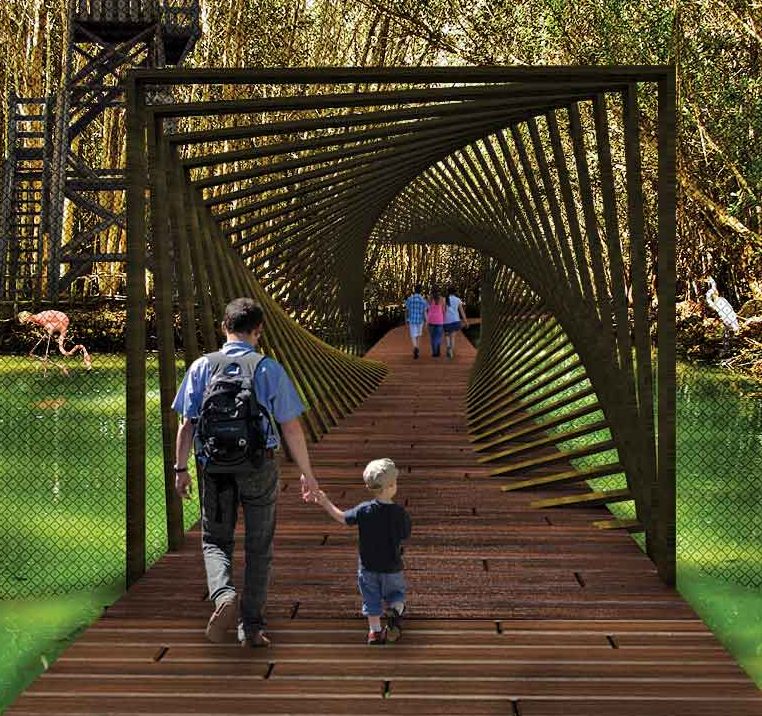 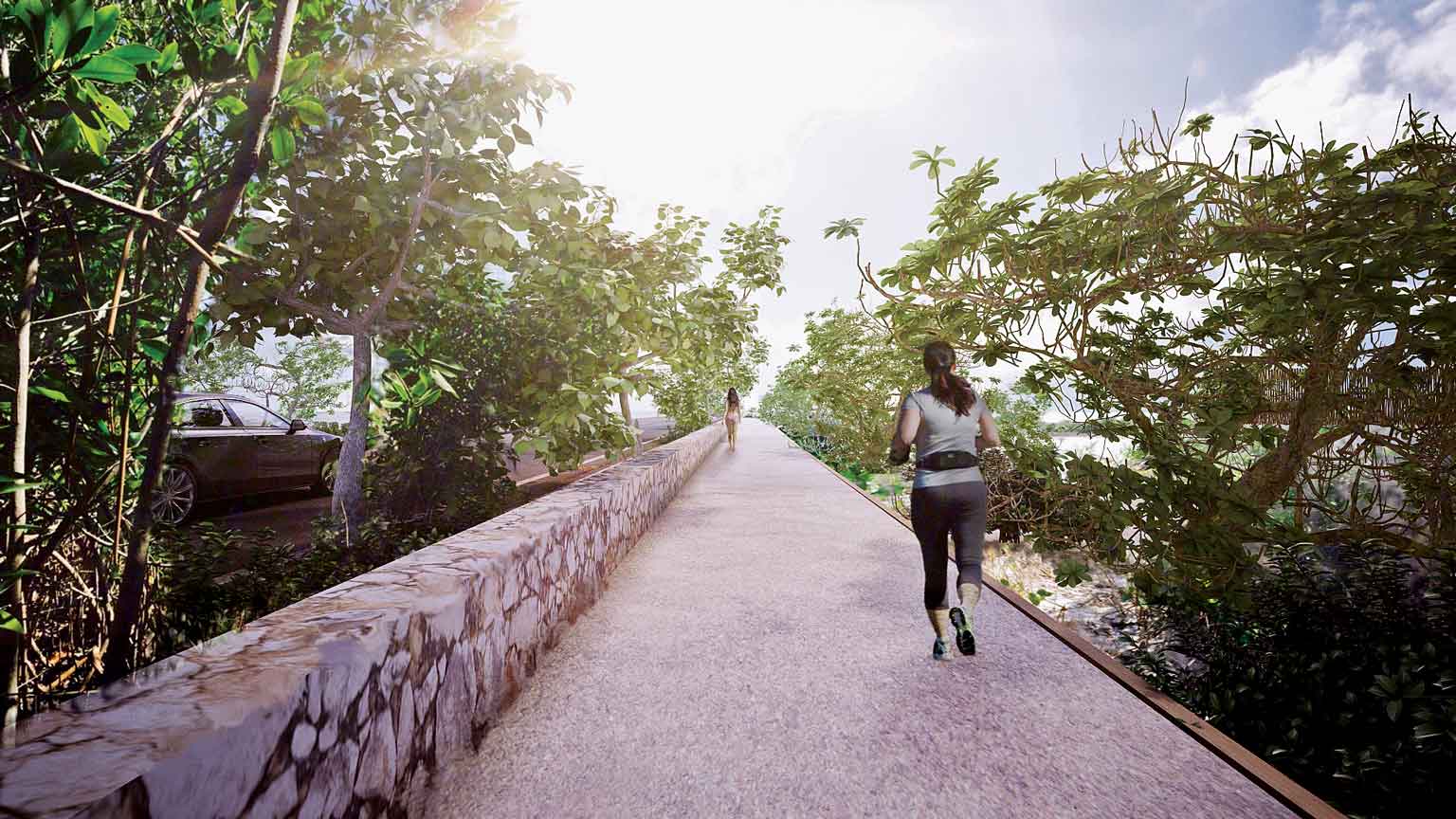 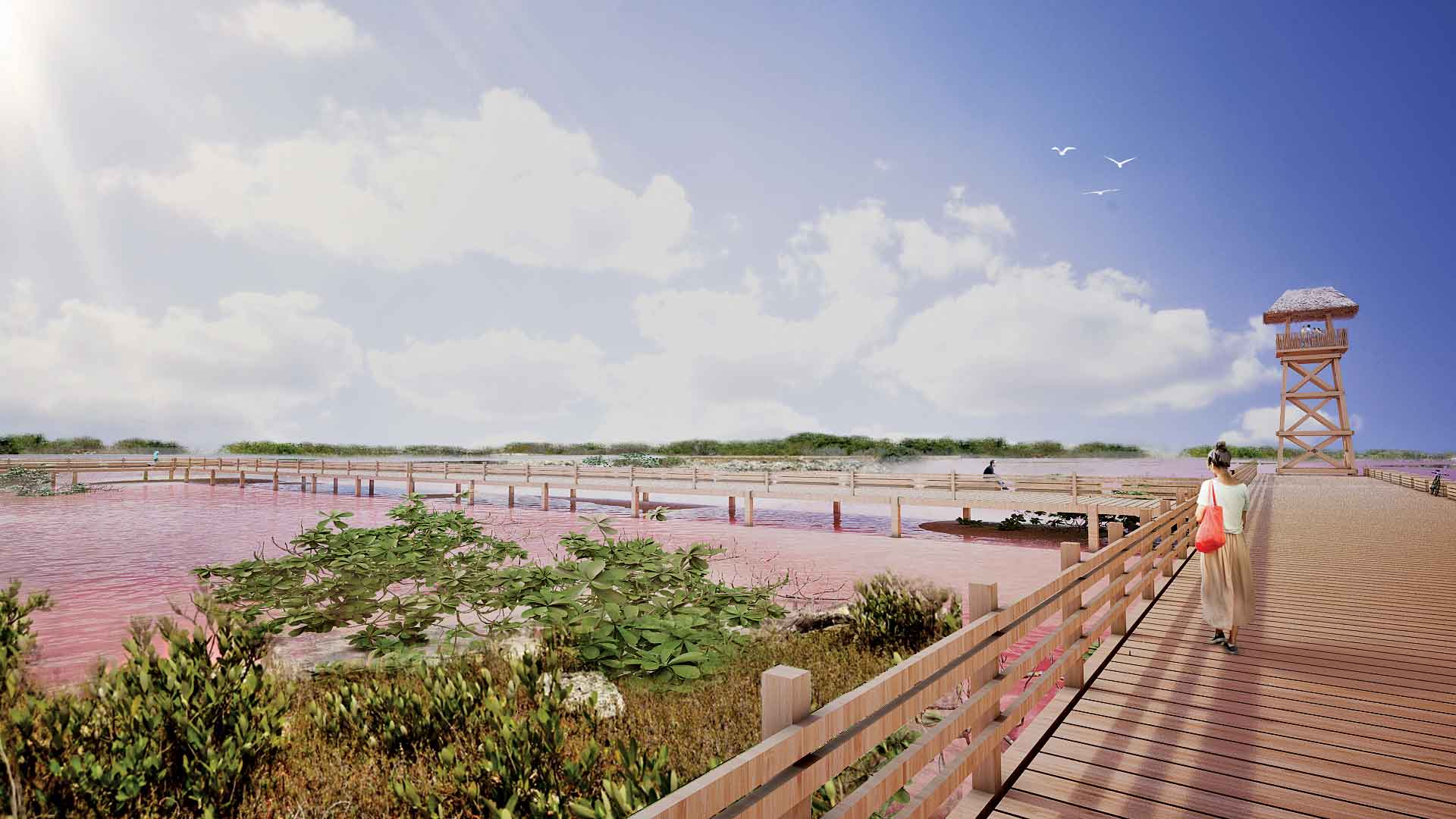 Its implementation increases influx of people in the medium term, and generates development poles in the long term. 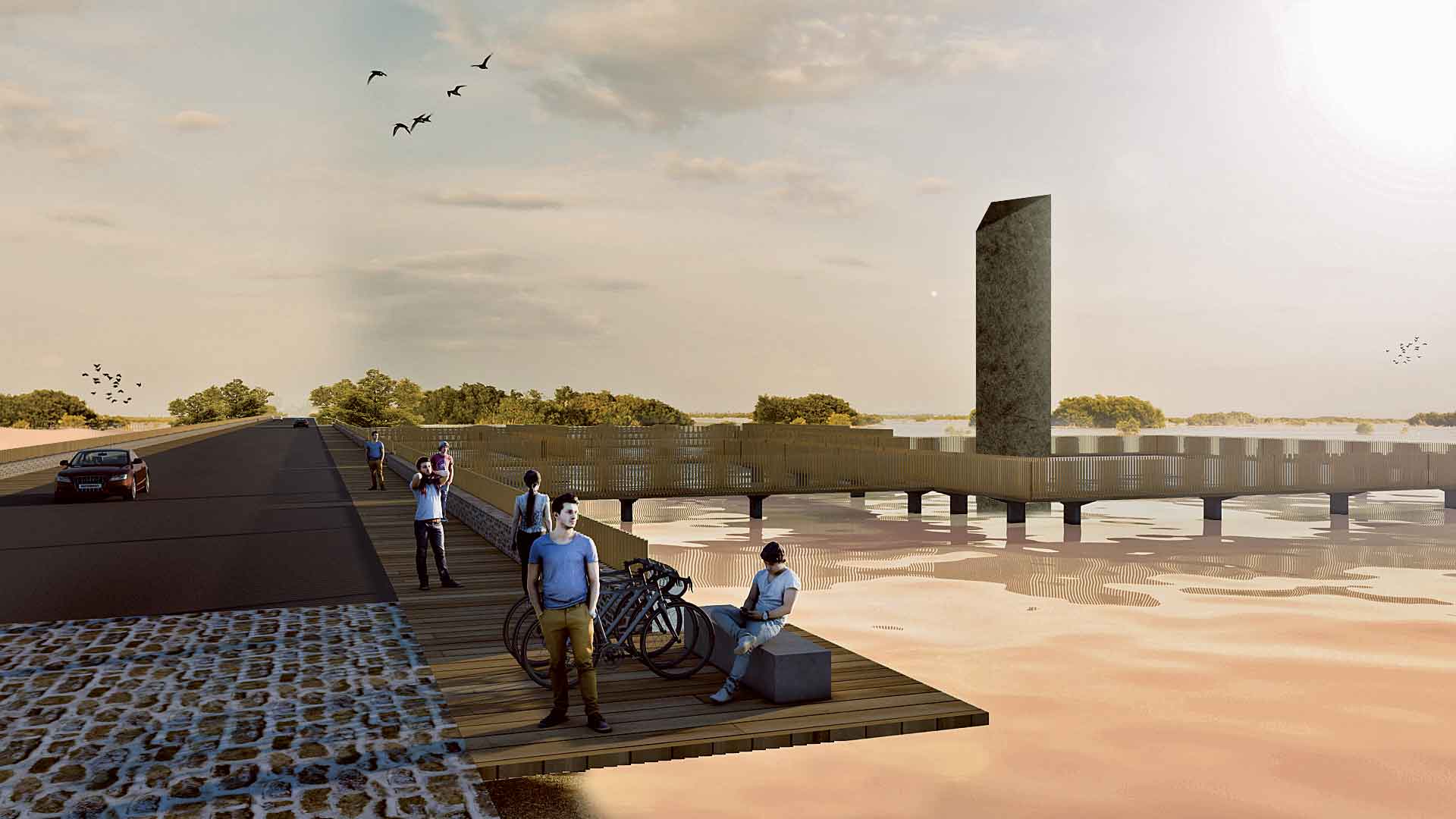 Project destined to recognize and preserve natural and cultural resources that may represent a potential advantage for the economic development of the population, and to add value to the saline, archaeological, lagoon and mangrove landscape. 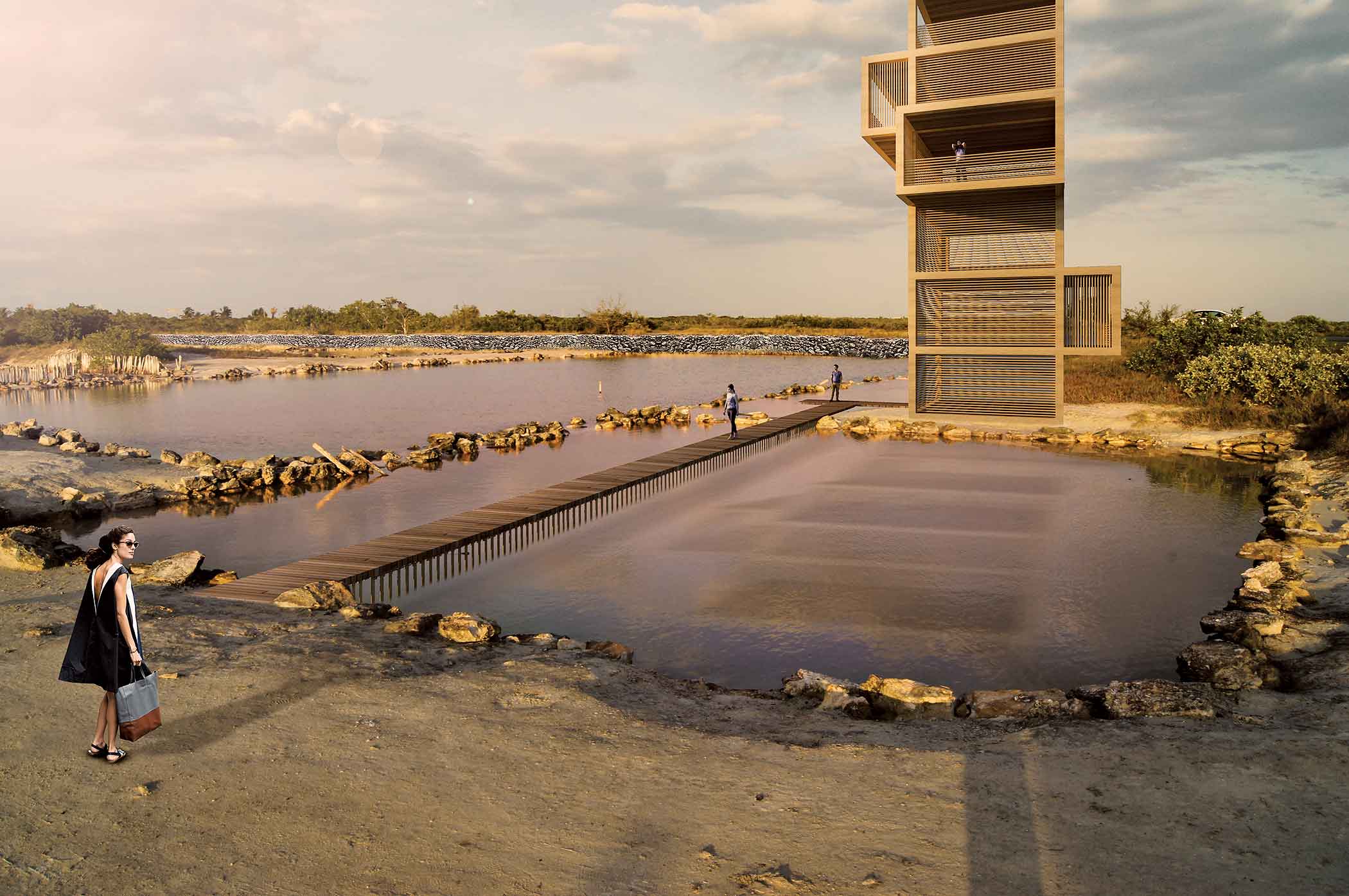 Developed in an old salt pond in the Mangrove of Chicxulub community, the project is destined to interpret and diffuse the processes associated with the meteorite impact and landscape evolution of the area. 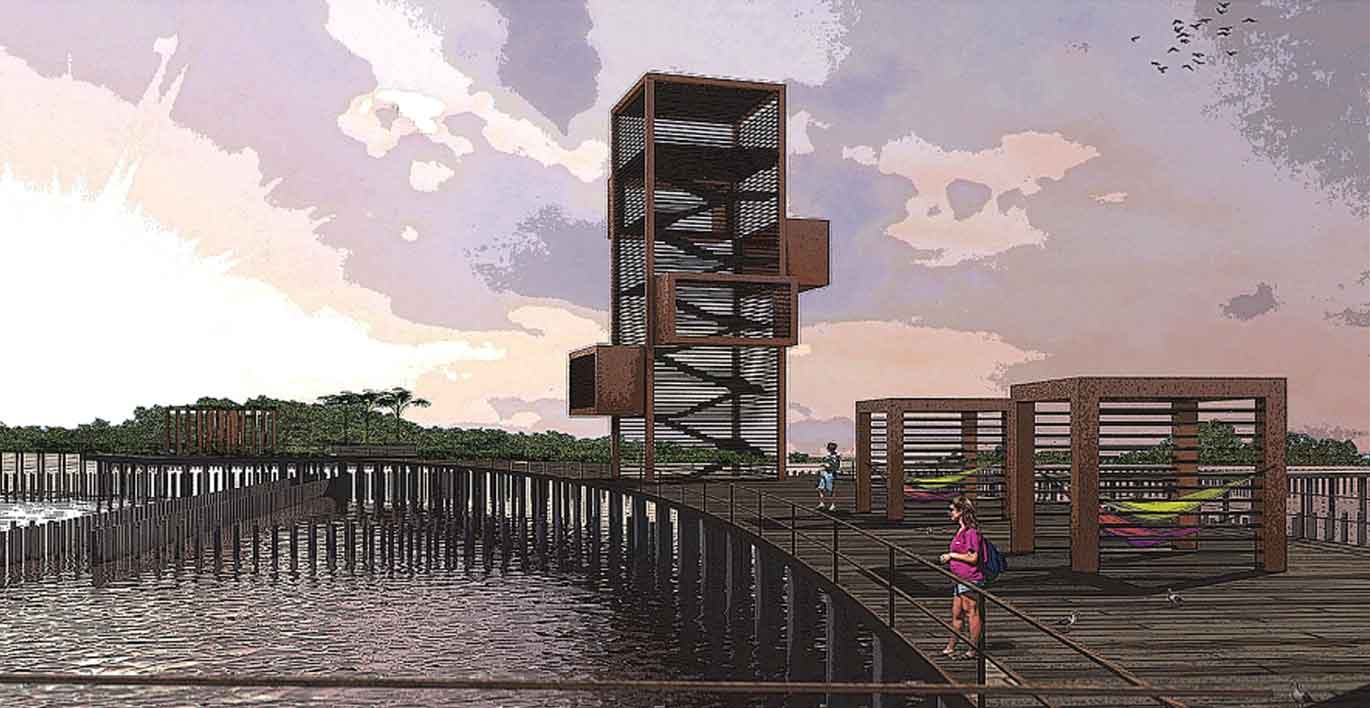 View of the lookout and runway. Educational tour on the Mangrove ecosystem and the observation of astronomical phenomena. Render: Marianela Porraz

Although regulations on environmental matters are sufficient and appropriate, throughout the development of our proposal of intervention we detected the need to develop a regulation for construction on the coast, this could reduce environmental impacts, by respecting the natural environment of coastal communities and their architectural typology.

Our work is a sustainable development model that is possible to implement and replicate in other regions of the Yucatan coast.

We believe that investing in projects where nature and culture are the development base, allows the flourishing of ethical and aesthetic values in our societies, which also generate identity.