Santiago de Chile. In the current context of urban expansion over rural areas, the transformation of productive spaces towards urban areas has fragmented the recognition of a territorial identity of Central Valley’s productive landscape, which historically has been portrayed in the works of Chile’s national artists.

Along with the development process of the city, the urban limits have changed, therefore the nearby rural spaces are defined as drifting sites and their borders as a rigid limit that divides the landscape unit.

Nevertheless, such process of spatial disintegration has contributed to blur the territorial limits and the “sense of the place” 2, enabling an opportunity to rephrase the dialog between city and country.  To assume this rural and urban encounter may enhance new meanings for the place through the redefinition of the limit as a dynamic space for city-country interaction that leads to knowledge, usage, and significance of landscape as a whole.

Before proposing the exclusive rescue of the local identities that are historically linked to the territory, we must assume the dynamic character of these identities embedded in the transformation of urban-rural processes. This allows suggesting that the places for encounter within the landscape are fundamental sources to generate new senses of place and socio-ecological identification.

“The proposal involves the construction of a new kind of city-country limit where a system integrated by hills is presented as a transition area between both worlds.”

THE PROJECT’S VISION: THE ROL OF SAN BERNARDO IN THE URBAN-RURAL LANDSCAPE

The hills in the Santiago Valley are “island hills” only as long as they their limits allow them to differentiate from the city and then be recognized as units within urban landscape. There have been many cases in which the lack of protection in their limits has resulted in the destruction of these urban pieces, for example, Apoquindo, Dieciocho y San Luis hills. Along the same line, the hills that compose CVSB are showing already the first signs of the struggle between city and hills which, if not properly resolved, could lead to the same fate as the previously mentioned hills.

According to the Metropolitan Regulating Plan of Santiago (PRMS100), Santiago will have a significant urban growth, which would directly impact the commune of San Bernardo.

San Bernardo has the opportunity to act as a precedent in the construction of a new kind of city-country limit where the system integrated by the hills Chena-Hasbun-Adasme-Negro-Los Morros and Maipo River is presented as a transition area, in a metropolitan and communal scale, between both worlds creating a passageway among territorial elements that rebuild and reformulate the experience of rural and productive landscape of Central Valley according to the dynamic conditions of urbanization, which is open and public for the education and recreation of citizens. 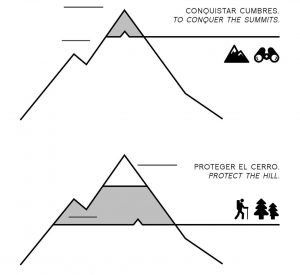 With the objective of generating, as well as a new vision, a model of management that is associated with activation and conservation process of Corredor Verde (Green Passageway) of San Bernardo, a development of sustainable patches was proposed (Stepping stones) 3.

It would be created in stages, taking into account for its design the time and people involved in the neighborhood, municipal and regional management, and also the parallel processes of financing and administration.

These patches are meant to build a symbiotic relation between each hill and the city, integrating functional services that mediate between the immediate community and the conservation area of the territorial elements through the creation of parks with recreational but also productive programs.

View from the hill. The habilitation of observation infrastructures. This process seeks to make the system of hills of Central Valley visible, starting from the visual recognition of their summits.

Preserve landscape and ecological attributes. To preserve the species of the valley’s native flora and fauna, a gradual restauration is proposed, which would be accompanied by an educational infrastructure that spreads the knowledge of the ecological attributes of the hills’ landscape. Stream’s reforestation, tours delimitation, signaling and basic furniture implementation, creating with this interpretative trails. 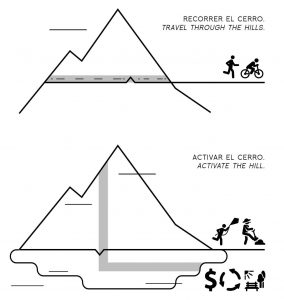 Enabling a plinth. Seeking to conquer the visual relations between hills and the city a 20 m high mobility ring is proposed for pedestrians and cyclists, which would allow having a view over trees and urban buildings. This plinth is located in the limit between the buffer and the hill.

Build permeable and dynamic buffers 4. These areas function as permeable limits that host local and metropolitan activities for education, production, and recreation. The main objectives: reduce city’s erosive impact, increase recreational and productive areas, and potentiate local fauna’s mobility. The buffers are connected to each other by urban passageways that go through existing streets and avenues, renovating the street profile, which can include bicycle lanes, channels, waterways, and mixed groves with exotic and native species that require low water maintenance. 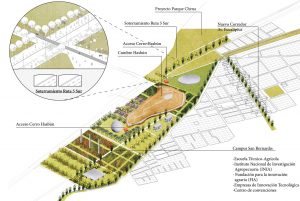 It includes a development and investigation campus that provides diverse institutions and groups a proper infrastructure that can be used for education, business, production or experimentation. 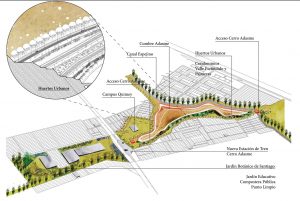 The Metropolitan Region is a worldwide known Mediterranean biodiversity hotspot, therefore the habilitation of the first Botanical Garden on Santiago was proposed, which would preserve, investigate and share knowledge about native species and characteristics of the Mediterranean landscape, contributing to the community’s education.

This program demands the incorporation of production areas of Mediterranean species of herbs, shrubs, and trees, such as substrates preparation areas and recycling of organic matter, greenhouses, seed banks, plant nurseries and zones of vegetal multiplication, among others. 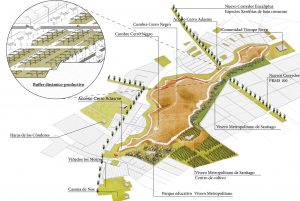 Nowadays the majority of species that are used to plant trees in Santiago City come from small private plant nurseries that are unable to provide for big urban projects, generating also high unit costs for each vegetal individual making it difficult to have the proper quality for reforestation projects.

For these reasons, the development of a Metropolitan Plant Nursery is proposed to respond to the demand of autochthonous plants and species that are used for phytoremediation (species that help to improve and purify the environment), which would facilitate educating citizens about sustainable forest production and protection of the green areas of Santiago.

The production of species for phytoremediation can provide vegetal individuals for the rehabilitation of polluted urban areas and small dumpsters. 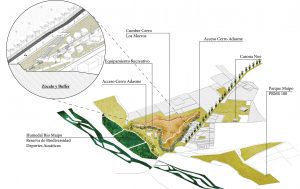 The water management has become one of the main technological breakthroughs in Chile’s productive landscape, but many times these processes involve a high degree of adverse effects for biodiversity of basin and the river bank biodiversity. The proposal consists in building a recreational water deposit (artificial marsh) for Santiago City that allows cleaning the waterway, hosting and preserving the basin’s flora and fauna at the same time.

These water deposits generate an artificial marsh that would concentrate a great diversity of fauna species, serving as catalyst for the Central Valley ecological restoration.

“It is important to be aware that ecological diversity is our most precious resource and that the marshes constitute a biodiversity nucleus” 5.

1 Santiago Cerros Isla Foundation is a non-profit organization that seeks to value, integrate and utilize the natural elements of Santiago’s landscape to improve the city’s life quality. Their first objective is to recover 26 island hills located within the urban area of Santiago, consolidating them as recreational spaces for public use. Discover more in http://www.santiagocerrosisla.cl/