They were the first events of this kind organized in a Latin American and developing country. 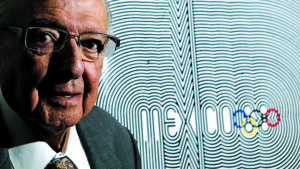 In the words of Mexican architect Pedro Ramirez Vazquez, president of the organizing committee -our country would not significantly stand out in sports, but it could do it in the cultural field-.

“The Route of Friendship” would become a gathering of nations through a large format sculptural exhibition on a road line. The curatorship by architect Mathias Göeritz consisted of a walk conformed through 22 formidable sculptural pieces, gift from the participating countries on five continents.

The intervention area was located in the unpopulated lands of lava preserved south of Mexico City in the fifties. 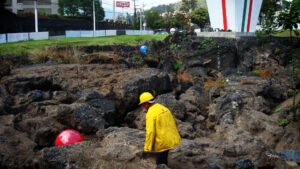 In the late nineties, amid urban onslaught, a restoration of the “Rout” began and landscape rescue became a key proposal of a process that nowadays continues. 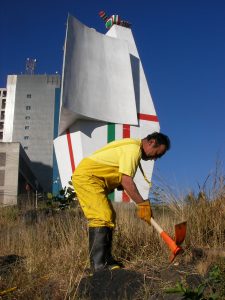 The sculpture of Italy was the first, which in 2006, contemplated a restoration of the original scree landscape and with it began the other projects with sculptures of Poland, Switzerland, Czech Republic, USA/Austria, Mexico and finally Australia.

The rescue of the original landscape for the relocation of the sculpture of Italy, “Man of Peace” by artist Constantino Nivola, came through the restoration of lava and native plants gardens.

The work first consisted in the demolition of some trees in poor condition. Then it was removed the filler material with which the rock had been covered. 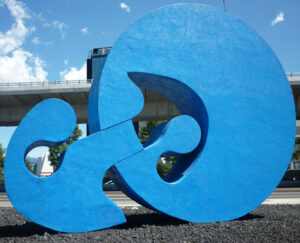 “The anchor”, by Willi Gutmann, Suiza. 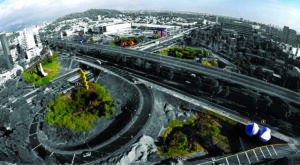 In 2010 the Route of Friendship Board decided to relocate other six sculptures: Mexico’s sculpture entitled “Signs” made by Ángela Gurría, “Articulated Wall” from Austria/USA by Herbert Bayer, the Swiss piece “Blue Anchor” by Willi Gutmann, “The Three Graces” Czech Republic sculpture by Miroslav Chlupac, the sculpture “the Sun” of Japan by Kiyoshi Takahashi and Australia’s piece “Janus” (which looks like a MöebiusStrip) by artist Clement Meadmore

At the site of therelocation siteof the Australian piece “Janus” were found several specimens of terrestrial orchids, while at the site of the sculpture “The Three Graces” of Czech Republic is where we discovered a true explosion of Milla bifloraspecies, commonly known as St. Nicholas star, which blooms in October. 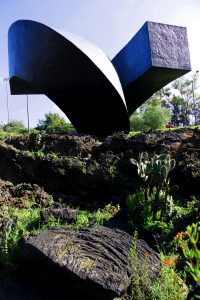 Finally the Japanese piece “The sun” lives very closely with the eco-archaeological site of Cuicuilco and where there appears to be an underground connection used by smaller fauna.

With these actions began the idea of concentrating the sculptures in the clover formed by the intersection of two main avenues of the city (Periférico and Insurgentes Av.), but having as a premise to initiate a landscape rescue in all the ensemble scree outcrops.

The lands of volcanic basalt are the best way to recreate the original landscape where the art pieces were conceived.

The lands of volcanic basalt are the best way to recreate the original landscape where the arte pieces were conceived. It was the decided not to build more gardens, no more planting or spending, on the contrary, removing exotic vegetations and subtracting landfills and rubble that covered the ancient rock. 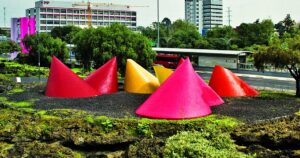 It was then decided not to build more gardens,no moreplanting or spending, on the contrary, removing exotic vegetation and subtracting landfills and rubble that covered the ancient rock.

It was here where I coined the term “Landscape Archaeology”. 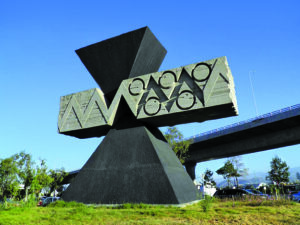 The proposal of landscape architecture and archaeological landscape rescue is based on the following symbiotic relationship: -the scree landscape will be “re-known” if these large sculptures are placed on it, and conversely, sculptures can only be “re-known ” if the existing original landscape is restored and recreated, when it was created and built all the work known as “Route of Friendship”-. 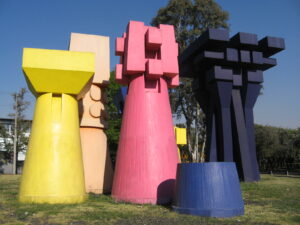