The Steel Museum Furnace 3 is based on the restoration and reuse of the original structure of a melting furnace which operated from 1968 to 1986.Its transformation into a museum, involved both processes of industrial archeology as an architectural and landscape design with sustainable and vanguard approaches, including the use of green-roofs.

Although the use of the concept and system of green roofs is still new in Mexico, an important part of the main galleries of the museum are underground, covered by 1,700 m2 of green roofs, which represents the largest roof garden in one only public building in Latin America, and the only one with such a particular geometry.

700 m2 of extensive green roof made of sedums were built on a circular solid steel structure with a surface made of triangular folds up to a 60 degrees tilt. Another 1000 square meters were covered with “intensive” green roofs made of native grasses, which becomes a large part in the main entrance.

“The design concept involves both industrial archeology and sustainability, on issues such as the use of recycled materials derived from the steel industry and the same building, harvesting and reuse of gray water and rain, high efficiency equipment, low water consumption supplies and landscape roofs.” 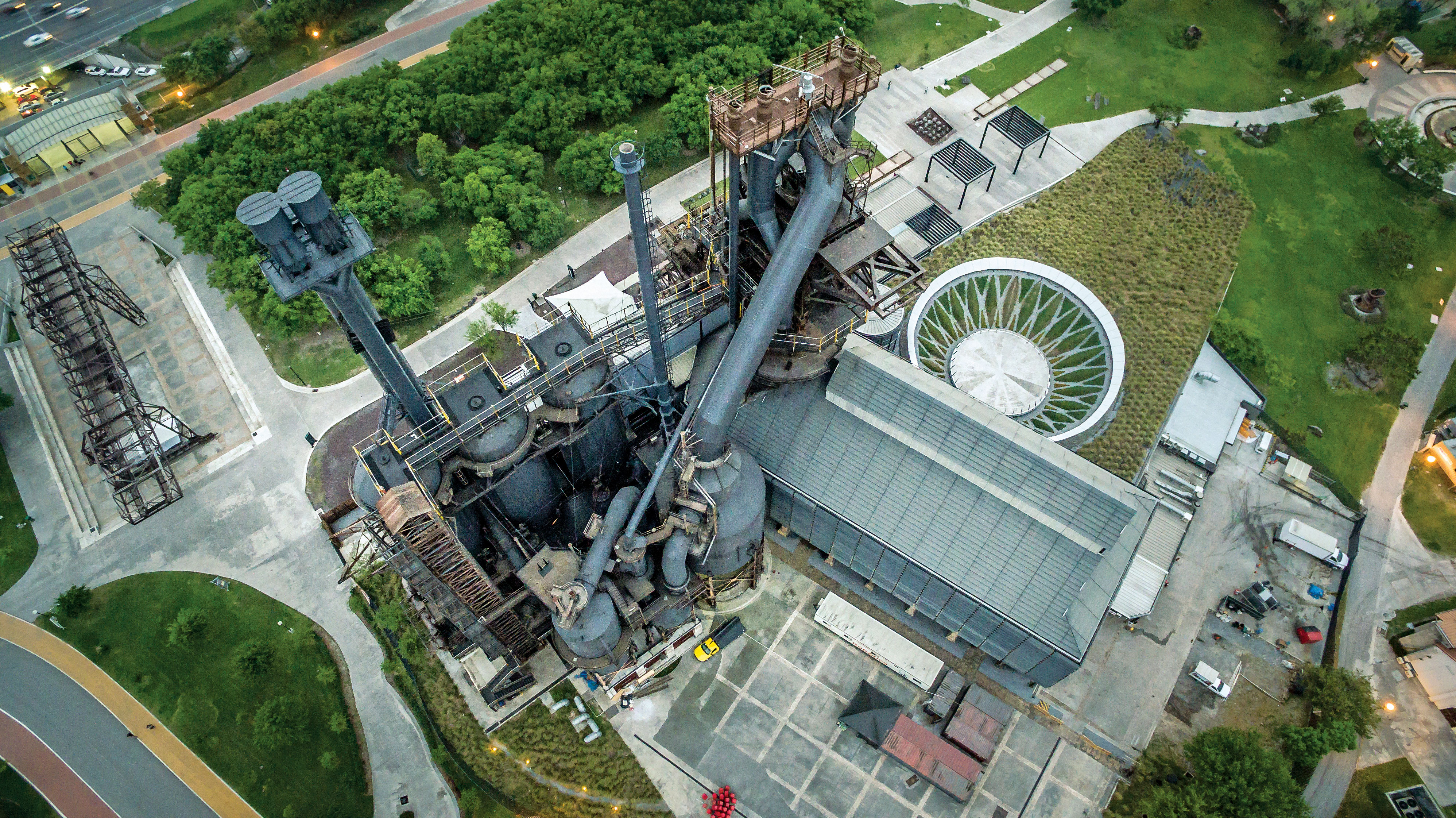 The architectural project, part recycled and part new construction is authored by the British firm Grimshaw Architects with museology of the Canadian firm AldrichPears, and complemented with exterior architecture design, fountains and roof gardens by the Mexican urban landscape firm Harari architects.

The project was adjudged in 2005, just two years before its opening in 2007 for the Universal Forum of Cultures to be held in the city of Monterrey. 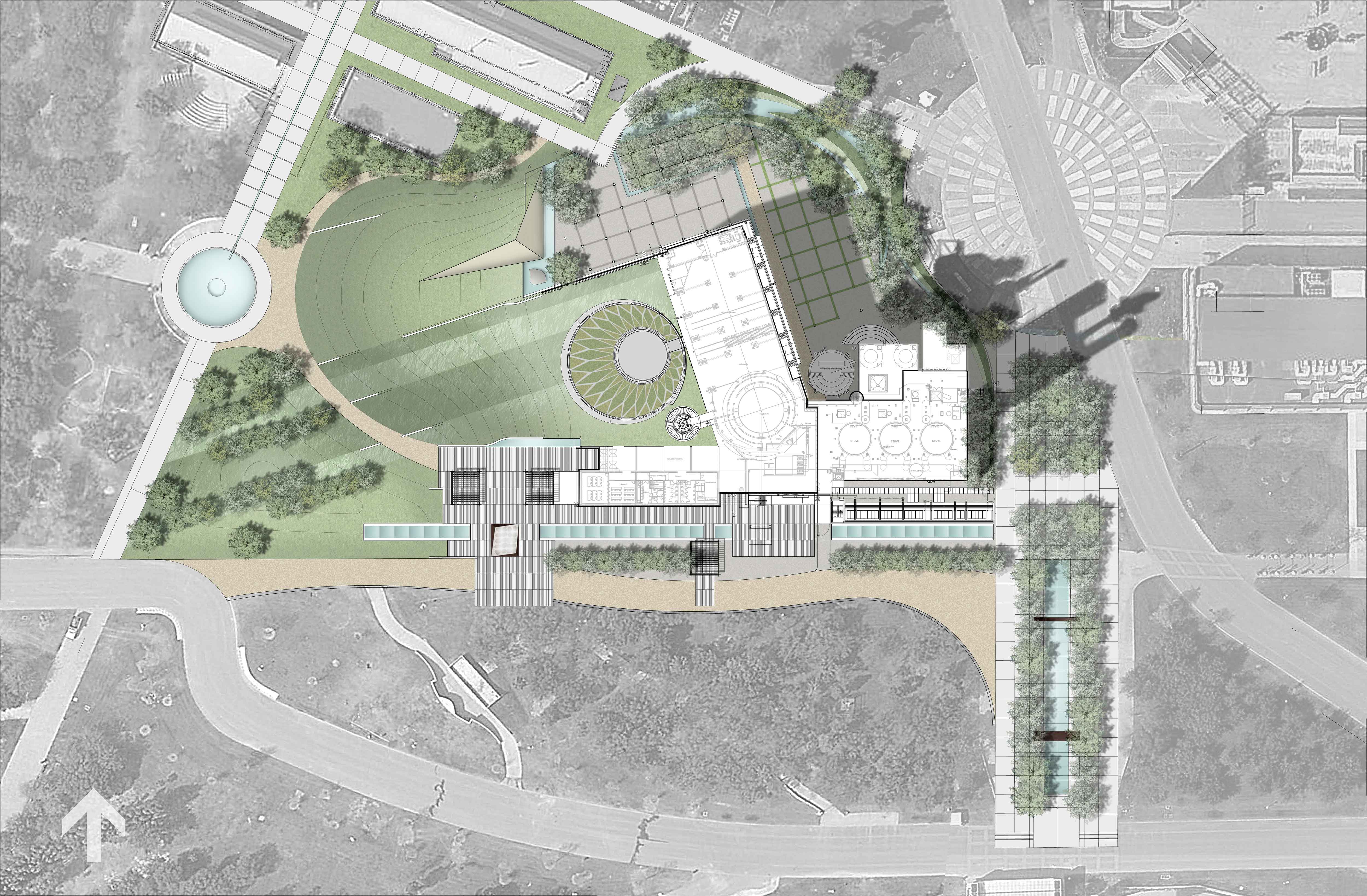 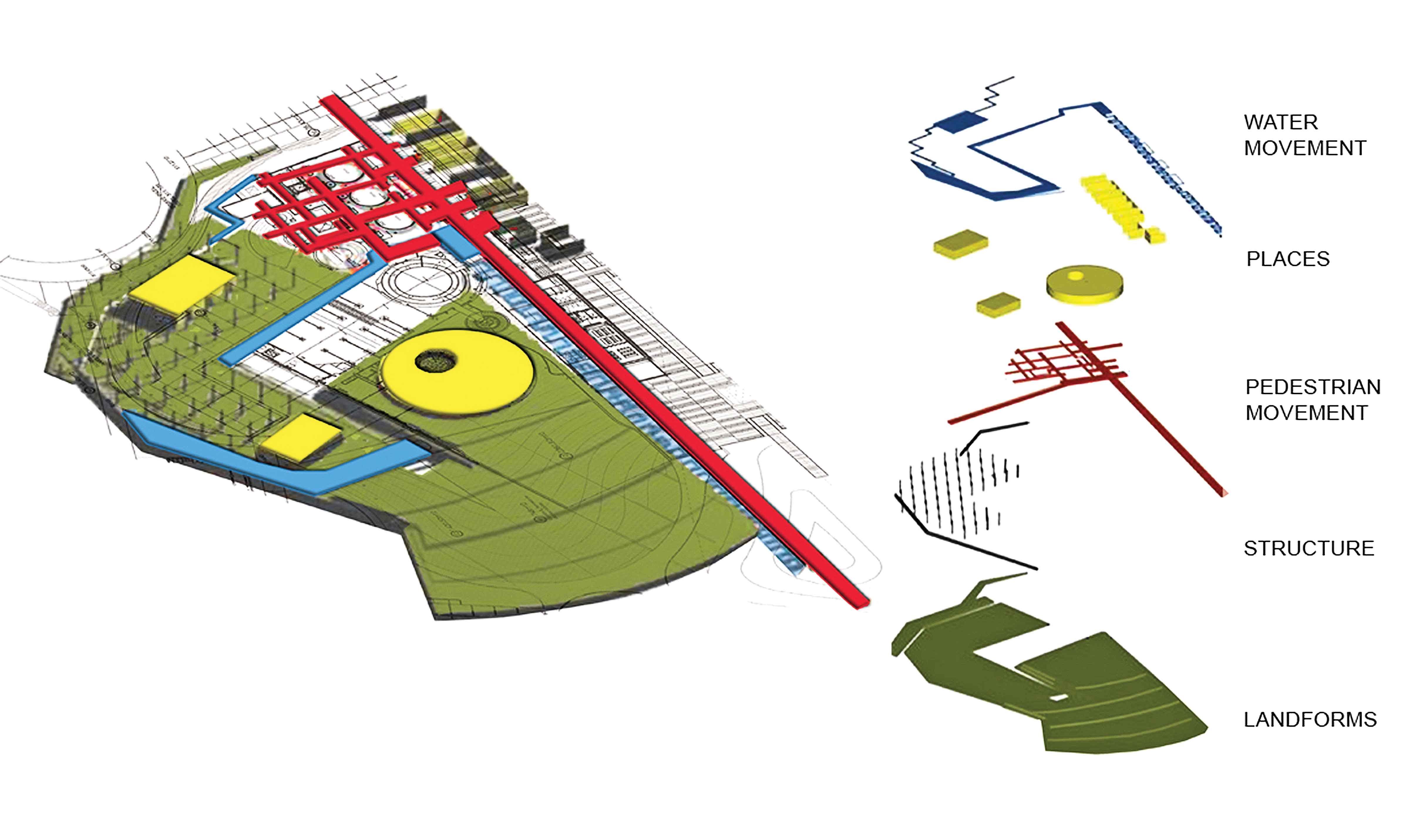 The design seeks to achieve a landscape of industrial character and based on the recycling of materials from this industry. The landscape is conceived as a process, a spatial, sensory and learning experience. 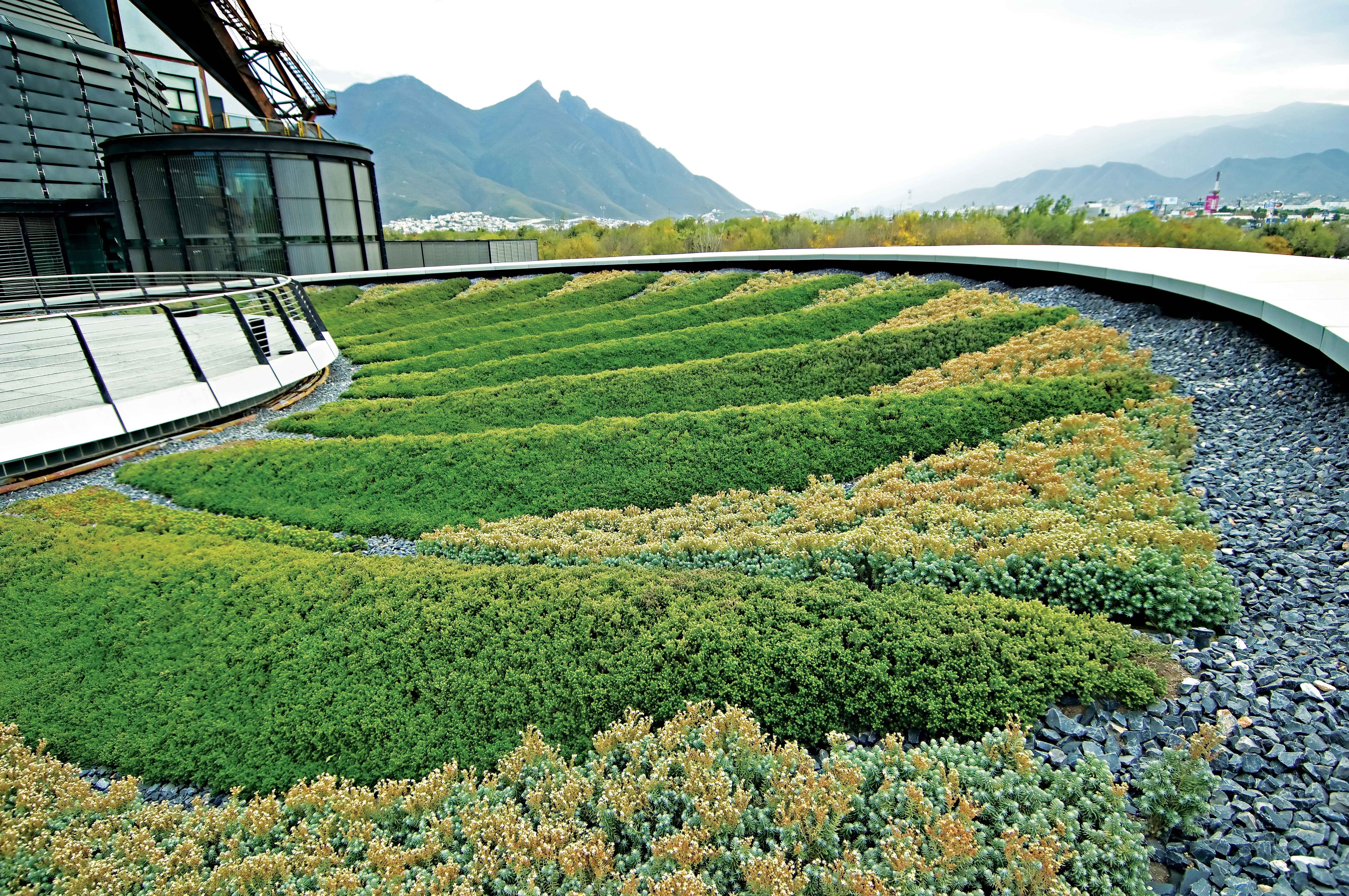 The landscape project presents a Space Diagram based on the three levels of design and reading of the building at an architectural level: STRUCTURE (constituted by trees, walls, and volumes of soil), OBJECTS (constituted by living places, squares, covers) and FILIGREE (constituted by pedestrian circulations, water channels, and textures of industrial and recycled materials).

Conceptually it is conceived as one of the “places” or living objects in the landscape. It is located around the main terrace and although it is not physically accessible to the public is visible at a short distance.

This roof is particularly special and unique since it is built on a steel structure of circular base which surface is made of triangular folds up to a 60 degrees tilt. 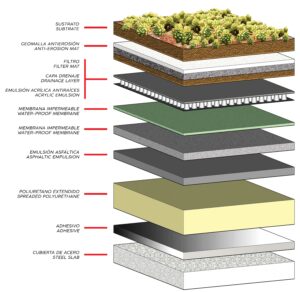 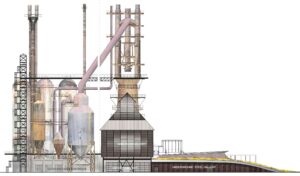 The selection of plant species is based on drought resistant and frost resistant plants, low maintenance and shallow substrate requirements.

Three different species of Sedum were chosen in order to emphasize with their different color and texture, the different levels of CAP’s geometry.

Species that reach a lower height were chosen to preserve the appearance of a living carpet, ordered and in a good shape. 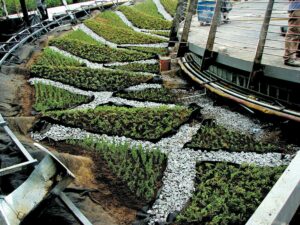 Sedums were planted with a density of 70 to 80 pieces per square meter for a total of 55 thousand plants, leaving walking paths of maintenance 50 cm wide covered with gravel.

In contrast to the extensive green roof, the intensive one was easier to execute, since it was built on a flat steel-slabsurface. Thejetting polyurethanecoating was not necessary here, and the rest of the waterproof and drain membranes are the same as in the extensive roof and the substrate increased the depth to 20 inches, about 50 cm.

Plant selection for this roof sought to give the appearance of a natural or wilderness area, covered with native grass. Initially strips of 2 or 3 types of grasses were contemplated, but for budgetary reasons a singlespecie had to be managed (Love grass, Eragrostis curvula).

This was replicated in a local vivarioum from seed before planted on the site three months later. It is a very resistant grass that was adapted without difficulty to the conditions of high temperatures and sunlight conditions on the site.

Other elemnts in te design are the esplanades and fountains-water, steam fountain, channel water, exterior walls-borders, rail wall and the winding fence. 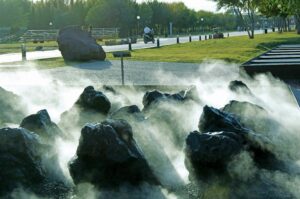 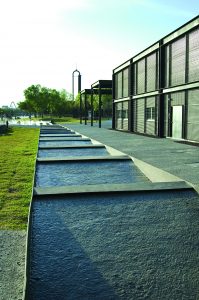 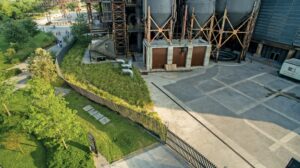 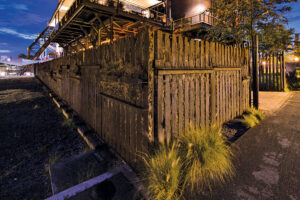