Factors to create a bioclimatic home

Factors to create a bioclimatic home

Learn how to orient a home and create a comfortable and healthy environment, with the recommendat ions of architect Ivonne Wall

A well-oriented home can mean savings of more than 70% in the consumption of air conditioning and lighting, in addition to creating a comfortable and healthy environment inside.

The use of artificial passive systems (such as pergolas, eaves, blinds, etc.) or natural (such as the proper distribution of trees, plants and vegetation in outdoor spaces) can reduce the temperature between 2 and 5 degrees in hot climates and generate humidity in the environment in places with dry climates to make them more pleasant.

Multiple agents intervene to achieve a coherent and efficient architecture that allows us to ma- ximize the available natural resources. The most important are:

Elements of the natural and/or urban environment such as topographic slopes, masses of vege- tation or nearby buildings can cast shadows on the land that can be used as sunscreens and also to channel the prevailing winds, directing them, regulating them or blocking them as required. Rivers and other accessible water sources should also be considered in the design.

The first thing to always consider is the latitude of the place where the terrain is located. It can be north or south, depending on whether our country is above or below the equator. In this case, we will use the north, which corresponds to Mexico. If the property is at the south latitude you can use this guide handling the orientations exactly opposite to what is presented here.

In hot climates it is recommended only if horizontal awnings or protections are used to avoid excess light and heat in summer. It is recommended for rooms, dining rooms and bedrooms since at night the heat captured during the day will be released.

• Southeast Orientation: It is the best orientation for very hot areas (even better than the south orientation), because in winter you receive sun during the mornings, while, in summer, only in the afternoons. 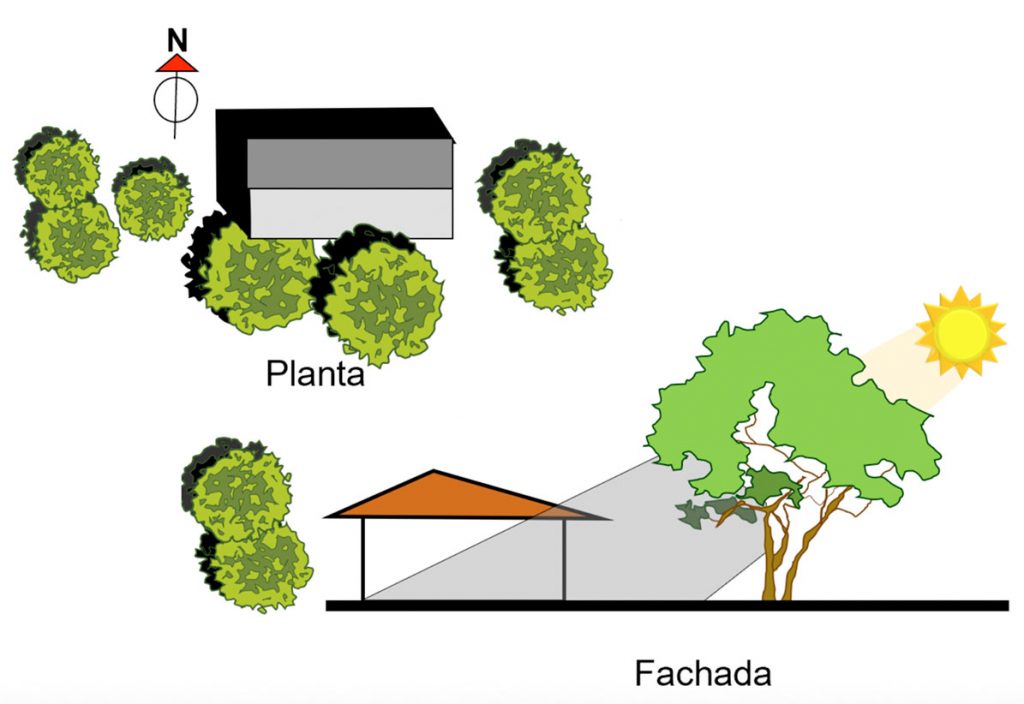 East orientation: It is the alternative to the south orientation in very hot areas, since it gives light and heat in the mornings that will be gone in the afternoon, allowing cool nights. If you want to avoid excess light or heat in the morning, you can place vertical awnings or trees and vegetation that regulate or obstruct their passage.

• Northeast Orientation: In winter there is no direct sunlight throughout the day and in summer only in the morning. It is an orientation that we can take advantage of for garages, cellars and areas of the house without importance and of little use.

• North orientation: It is a good option for very warm places because in summer it only receives direct radiation in the early hours of the day and late in the afternoon (in winter it does not receive any). It is the only orientation that provides uniform and homogeneous light throughout the day, making it ideal for studios, work areas, garages, pantries and machine rooms.

• Northwest Orientation: As in the northeast orientation, in winter we will not receive sun all day. In summer the sun’s rays will enter only from the afternoon, so it does not have much practical application except for secondary areas of little use.

• West orientation: It is recommended for semicold climates, as an alternative orientation to the south or east. Direct light and radiation are received from noon to dusk, which allows the house to be heated before dusk.

• Southwest Orientation: It is another useful option for cold climates as an alternative to the south orientation, since it receives sun in the afternoons during the winter months, from noon to night. In summer we will also directly capture the sun’s rays only from noon.

As a conclusion we can say that, in the northern hemisphere, the south orientation is the one that receives the most light and radiation, being suitable for cold climates, while the north will only receive some radiation in summer, so it is convenient in warm weather places. The east and west orientations are good alternatives to the south; being better the west for cold climates and the east for warm climates.

In very hot climates you should avoid direct exposure to the south orientation, especially in summer. For this we can use passive systems such as awnings, overhangs, cornices and blinds.

Other passive systems are achieved with vegetation and an adequate landscape design, using tree barriers that produce shade or direct the winds, with plant elements that provide moisture to the environment, etc. Thermal insulation (natural or artificial) also allows us to maintain a comfortable temperature inside a house.

Once the best orientation of the house has been decided, for a good distribution of the areas of a house we recommend: rooms and kitchen to the east (it could also be to the west in areas with colder climate); living areas, dining rooms and living rooms to the south (they are spacious spaces that will help regulate the temperature throughout the house); baths to the east or west; and studios, pantries and garages to the north. 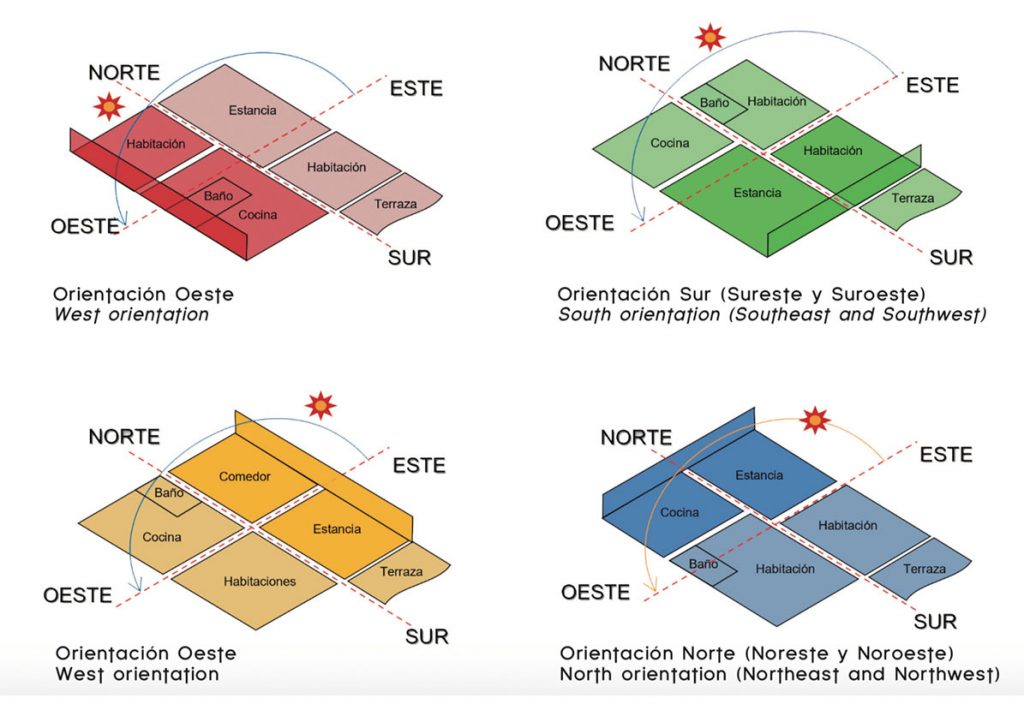 Distance and distribution of the buildings: It is suggested a distance of at least 5 times the height between each building and that the houses are distributed alternately against the prevailing winds to allow an adequate air flow between them.

This situation can be improved by orienting the buildings at a certain angle in relation to the predominant direction of the wind. In this way, the effective distance between the buildings is also increased. It is also convenient to use the vegetation to capture and take advantage of the winds, or to avoid them according to the climate where the house is located.

Constructive elements such as skylights, awnings, counterwinds, blinds, pergolas or the volumetry of the building itself can help change the direction of the moving air providing different advantages over the designed construction. The construction materials used will also greatly influence the achievement of an adequate interior climate, functioning as thermal and acoustic insulators that we can take advantage of to achieve a bioclimatic house.