New Orleans has long denied the fact that it is naturally situated in a delta, and has worked to keep water from infiltrating the city. The ground level of the city is slowly subsiding and behind the dikes, peak rainfall causes flooding and damageseveral times a year.

After Katrina, considerable effort was put into improving the dikes. Local architects, such as David Waggonner, advocated for the reconceptualization of the city’s relationship with its natural surroundings and the characterization of New Orleans as a ‘living city in the Delta’. 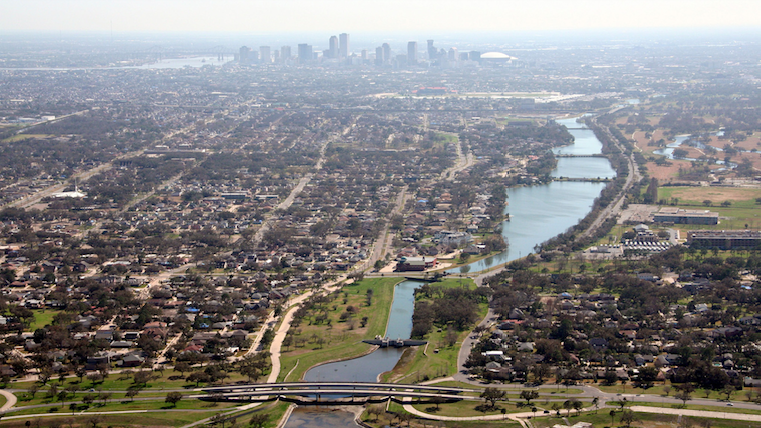 The current system requires a gradual transformation into a “delta city”, that is better suited to the local characteristic of the landscape. Photography: H+N+S 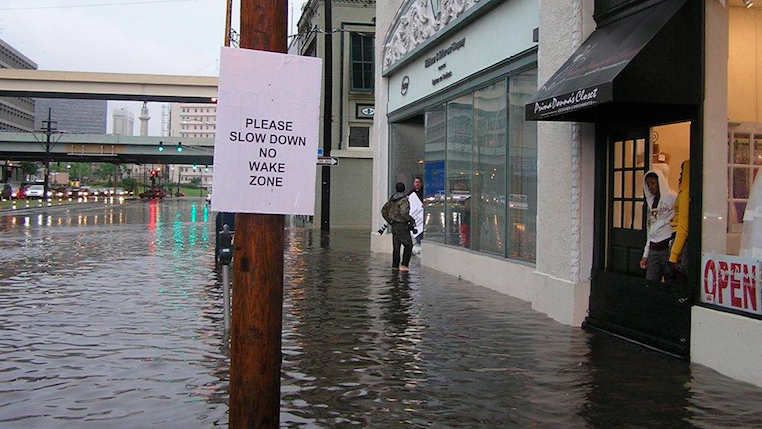 When it comes to coping with heavy rainfall the system has reached its limits. Climate change and increased paved surfaces will result in more and more floodings. Photography: Waldemar S. Nelson and Company, Inc. 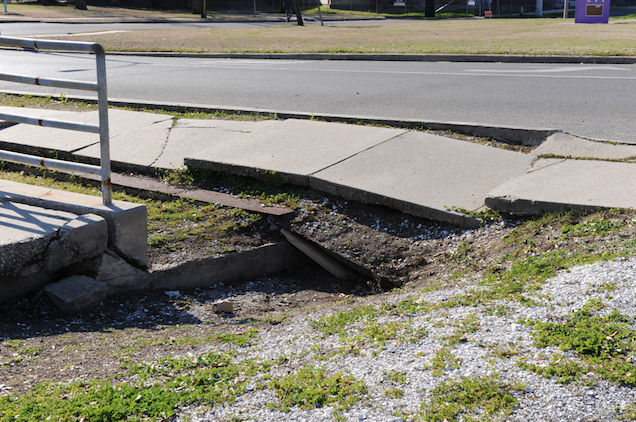 The existing water infrastructure requires gradual transformation into a system that is better suited to the specific characteristics of the soil in the area, utilizing the qualities water can offer; both aesthetically and functionally. In the plan, the natural landscape of New Orleans (backslope, bowl, ridge and polders) was utilized and integrated into urban development to a much greater extent than in the past. 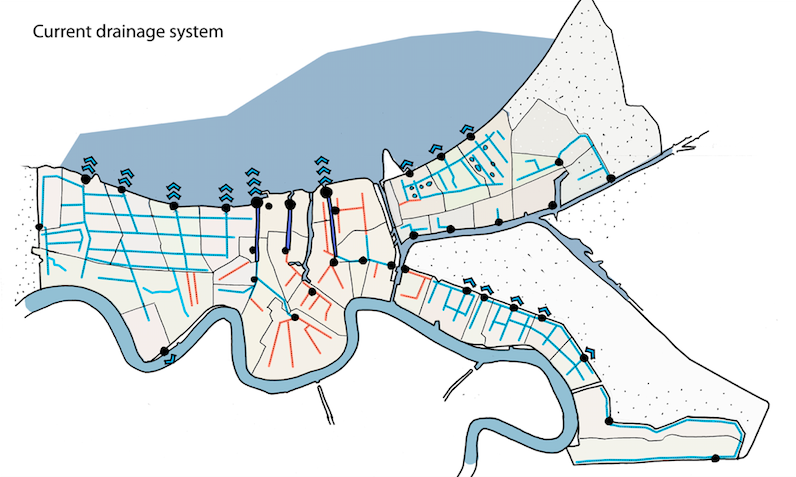 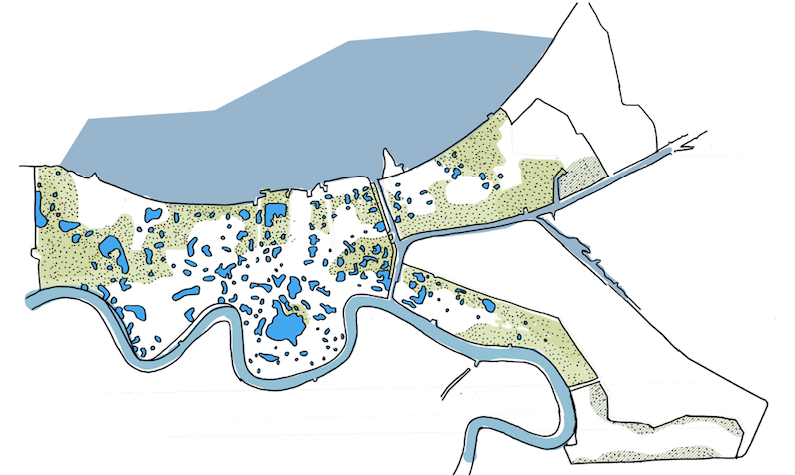 The most problem-prone are the lowest areas of the city, the soft soils which are subsiding due to deep drainage. Image: H+N+S 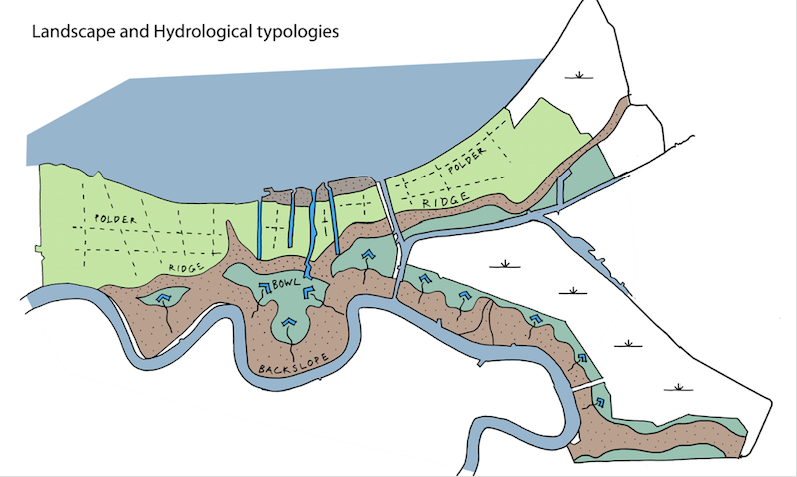 An innovative aspect of the proposals was the close connection between science, engineering and design.

In cooperation with hydraulic engineers, water issues were quantified accurately and proposals for a monitoring system were developed and tested. Local insights throughout the city and specific characteristics of the town and the subsoil were also considered and integrated into the design. From this information and research, comprehensive plans could be formed for the development of individual sub-basins.

The new approach positions water as a much more integrated, intertwined aspect of the city, through to small-scale neighborhoods and individual plots of land.

It is at this grassroots level that many of the new measures are necessary and targeted. In the new approach, areas may no longer simply discharge the excess water from their individual plots, but first capture and store it locally, to reduce pressure on the water system. Each part of the city makes a contribution to easing the water problem, and therefore, also actively contributes to the solution.

The mentality towards water changes: “delay, store, drain” is the new motto. Pressure on the storm water discharge system decreases, and retention and infiltration are part of an integrated system. Image: H+N+S

Pressure on the city drainage system during heavy rainfall is reduced, by creating mechanisms to hold rainwater and let it seep into the ground, before it enters the drainage system. The next step is to locally retain water. Finally, after the water is retained, it can slowly be discharged. In practice, the holding, storage and disposal of water (delay, store, drain) is smoothly integrated into a cohesive system.

Existing and new water courses within the city are no longer diverted straight into drainage gutters, but instead form part of a green network and the basis of an urban ecosystem.

The banks of river systems are as green as possible and feature hiking and cycling trails. Streets are renewed and newly profiled to offer plenty of space to slow water movement. Wadis and permeable paving are crucial in this area. The people of New Orleans are also inspired by the new approach of a ‘delta town’ and on private plots, green roofs and rain gardens are increasingly being incorporated. 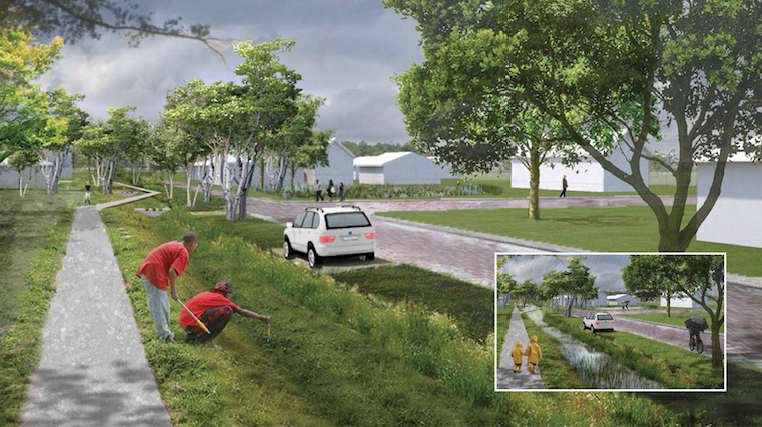 Along streets and in neighbourhoods retention and infiltration measures can be integrated, making water a part of daily life. Render: Bosch Slabbers

By restoring groundwater levels, soil subsidence in the vulnerable areas is reduced. The new approach considers the full cycle of water in its entirety, and therefore prevents wastage. 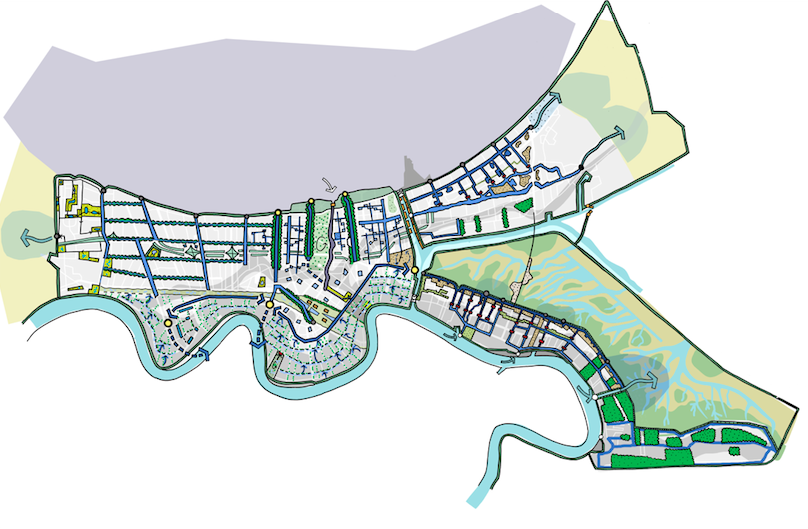 Framework Water Management Strategy: water can become an asset of the city on every scale level. A visible and accessible water system complements the technical subsurface system and can bring about a mentality change and quality impulse for the city. Image: H+N+S