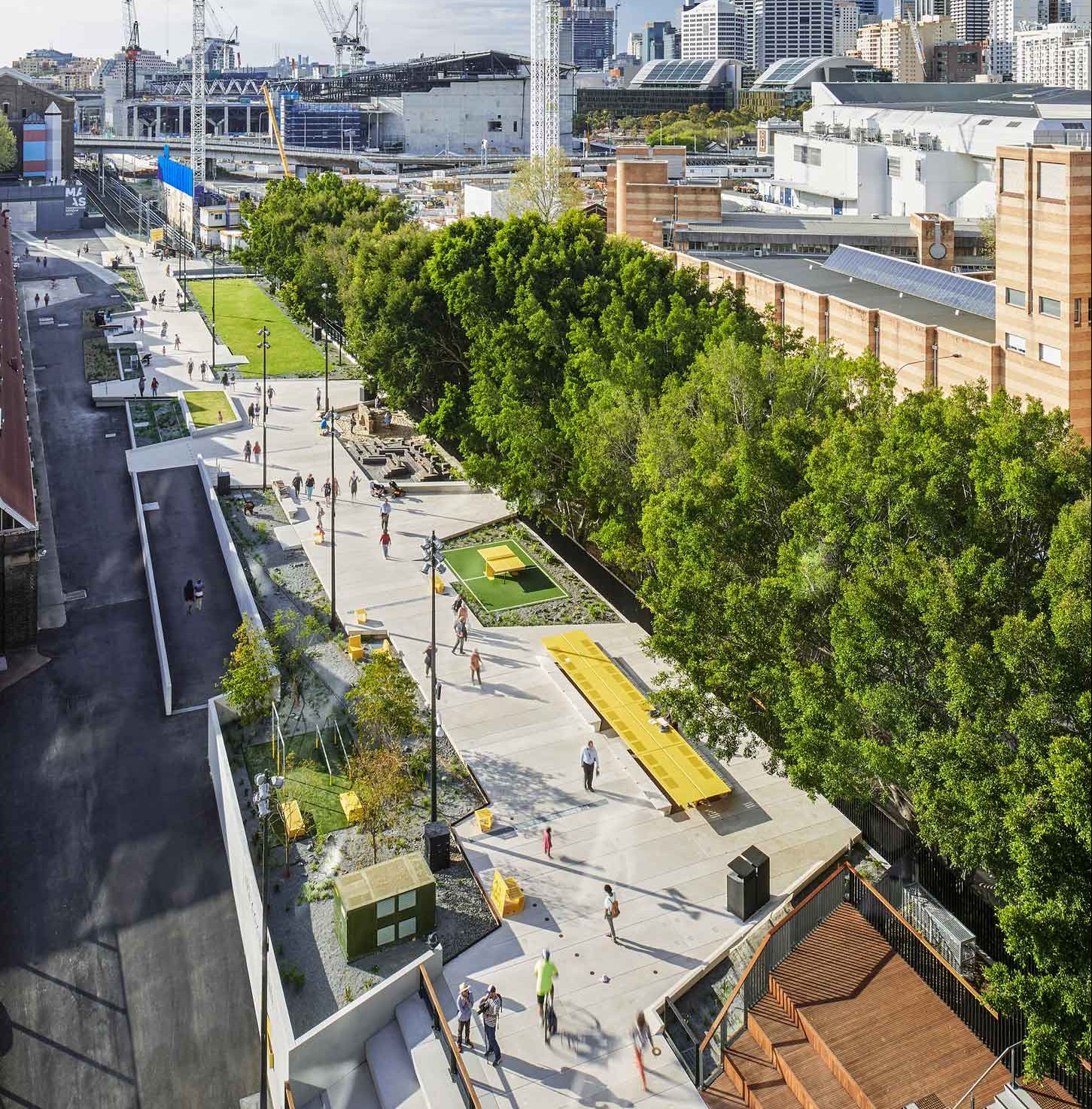 The original site was once part of the first railway that opened in Australia in 1855. It was vital to the transport of Australia’s coal, shale, timber, wheat and other produce. The use of the line declined due to increase of road transport and plans for a new seaport. Its rail operations shut down in 1984. The Goods Line has since been an isolated, disconnected and forgotten part of the city.

In 2015, it was revitalised as a conduit for 21st century industry, providing social infrastructure to the thriving innovat ion economy. Located in downtown Sydney, The Goods Line reimagines the disused rail corridor as a leafy, energised ‘public campus’ in the heart of one of the most densely populated, urbanised and formerly disconnected parts of the city.

The strategy behind the design, was to create a strong civic spine and establish a range of opportunities for people to come together, inhabit, occupy and use the space in a variety of ways – responding to the demographics of the area and to provide choice.

“The Goods Line is an example of the potential for design to transform isolated city spaces into creative and connected public destinations.”

The ‘Social infrastructure’ such as bleachers, seats, an amphitheatre, Wi-Fi facilities, a playspace, ping pong tables and raised lawns support the burgeoning public life of this part of the city.

Bespoke seating and furniture hark back to the site’s industrial heritage while the blurred boundaries along its length are designed to facilitate pop-up events and festivals, injecting a sense of community in a previously disused urban expanse.

Pedestrian and cycle connections are formed, unlocking access to existing streets and neighbourhoods that surround the park, knitting Sydney back into its surrounding city fabric.

Sustainable approaches including innovative use of materials and reinterpretation of the site’s history work to protect, enhance and regenerate the area and give a strong sense of place.

By fabricating the majority of material (precast concrete) off site and using advanced digital fabrication, drawings and coordination, the project ensures minimisation of waste and demonstrates its commitment to sustainability.

The project minimised cut and fill by layering a new ground plane and as a result preserved the heritage rail tracks and avoided any damage to the underground power cables.

Water efficient solutions, such as planting choice are included along the length of The Goods Line. Inlet pits have been concealed within garden beds, enabling storm water to naturally irrigate the drought tolerant, low water use and (majority) native/indigenous species. Where additional run off drainage is required, grated steel drains are integrated within the language of the precast concrete plank ground plane.

By retaining critical elements including the Ultimo rail bridge and rail infrastructure, and re-purposing others, the project has demonstrated innovative approaches to designing with respect to the past.

The design utilises the robust materials associated with its rail infrastructure past – gravel, concrete, steel, and timber. Original brick was salvaged and the site is fused with contemporary and sustainable elements, reinforcing the legacy of the site.

The native, site specific palette of plants which are set in gravel along the remnant rails are hardy, yet bring colour and texture to the post-industrial site. The retention of existing trees was critical to the project, illustrating the sustainable approach to the design.

The Goods Line was painstakingly planned and executed with ‘Study Pods’ that cantilever over the adjacent city street positioned between the canopies of existing fig trees offering working and social spaces for students, workers, and visitors. By integrating landscape into built form, a resilient environment using urban greening is created for a more environmentally and socially sustainable city.

The project contributes to Sydney’s green spine quota and uplifts the health and wellbeing of the local community and the greater city by creating wide reaching connectivity and movement opportunities. The history and cultural heritage values of The Goods Line have been integral to the transformation and revitalisation of this significant piece of rail infrastructure. The gritty industrial character and the toil of industrial labour have been conveyed through the design and materiality of the project and the interpretive initiatives.