Park in the former municipal garbage dump of the city of Merida, Yucatan

Park in the former municipal garbage dump of the city of Merida, Yucatan

Sometimes nature finds a way in the most unusual places. An example of this happens to the west of the city of Merida, Yucatan, in the terrain of more than three hectares where the municipal garbage dump was established.

After operating for many years as an open air dump, the site was closed at the end of the nineties, beginning a process of recovery with the natural growth of the vegetation. Furthermore, some measures and actions have been taken, as covering the old mounds of rubbish with crushed stone and a layer of soil made from topsoil, as well as daily injecting water from a deep well.

Nowadays, after some interventions, the site is far from being that old garbage dump, since it has been converted into a landscape of almost natural perception, formed by a large meadow that covers with a slightly hilly topography what yesterday were the reliefs formed by mountains of garbage, serving as a substrate to an incipient native spontaneous vegetation, as well as providing home to a very diverse wildlife, such as the more than forty species of birds that have found refuge in the body of water that has formed with the daily injection of this liquid. 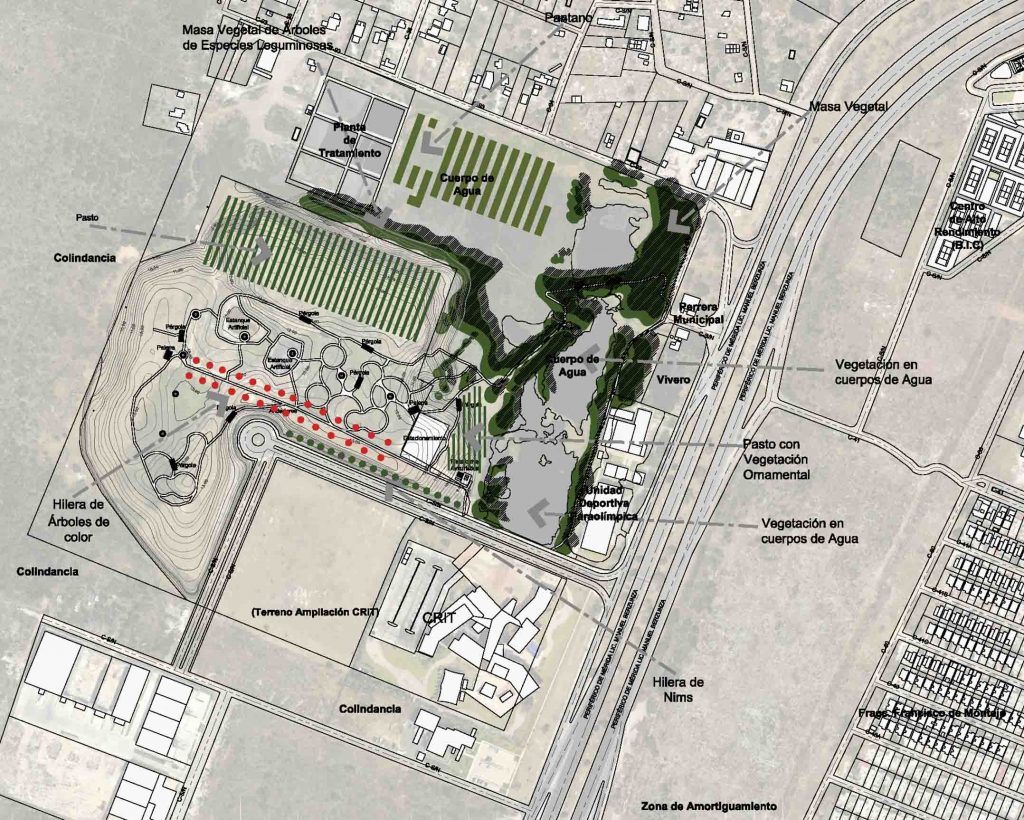 Product of a postgraduate thesis, the present project was created from the point of view of taking a space in the city of Mérida that is abandoned, deteriorated, with bad image and with a high degree of degradation and insalubrity, to recycle, reorient and reintegrate it to the daily life of the community, to provide the inhabitants of the area with a public green space of leisure and in harmony with nature, with the necessary adaptations and infrastructure to carry out different recreational, contemplative, sportive and educational activities. Its realization could serve as a trigger for projects that educate children, youths and adults in the proper handling of garbage, address the problems of pollution that generates garbage, as well as the possibility of recycling many items that are currently thrown away, all this from a landscape intervention.

After making a topographic survey, a photographic survey and a census-survey of the different genera and families of the existing vegetal palette, a diagnosis was developed to finally propose a Landscape Design Project, dividing the land into five homogeneous zones that presented similar characteristics, from which the potential was established by zones.

Zone 1: Consolidate the landscape; observation, conservation and sanitation activities. Propose an area of observation and contemplation of birds and aquatic plants, providing an information service for knowledge and dissemination to society.
Zone 2: Apply recycling and reuse of abandoned spaces, apply technology and education concepts. Incorporate a space with bad image and with bad smells, providing it with outreach services for conservation, recycling and waste management.
Zone 3: Intervention with waste for education of children, youths and adults and raise awareness in society about waste management in our current society. Propose a space for recreation and recreation through tours and stays that allow and facilitate the coexistence of users.
Zone 4: Spaces with great possibilities of being integrated to the project. Propose projects of sportive recreation, games and leisure for the inhabitants of the area, particularly aimed at young people.
Zone 5: Pre-existence. Integrate the existing spaces to the new activities of the group. Monitor and propose the integration of existing areas to new proposals for use.

“The project is centered on the creation of a park that offers to the west side of the city a recreational space with the necessary adaptations and infrastructure to carry out different activities, all of this from a landscaping intervention.” 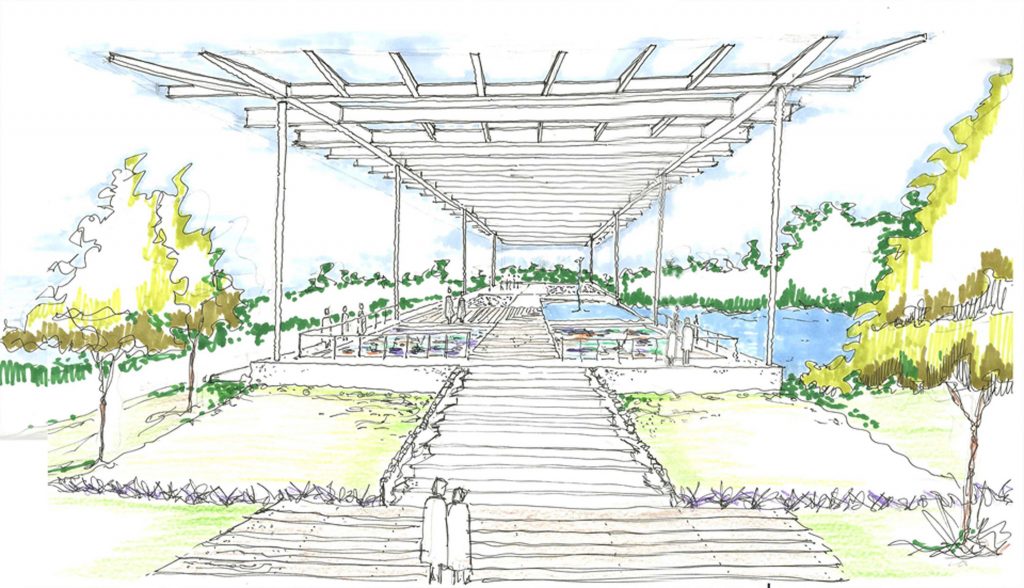 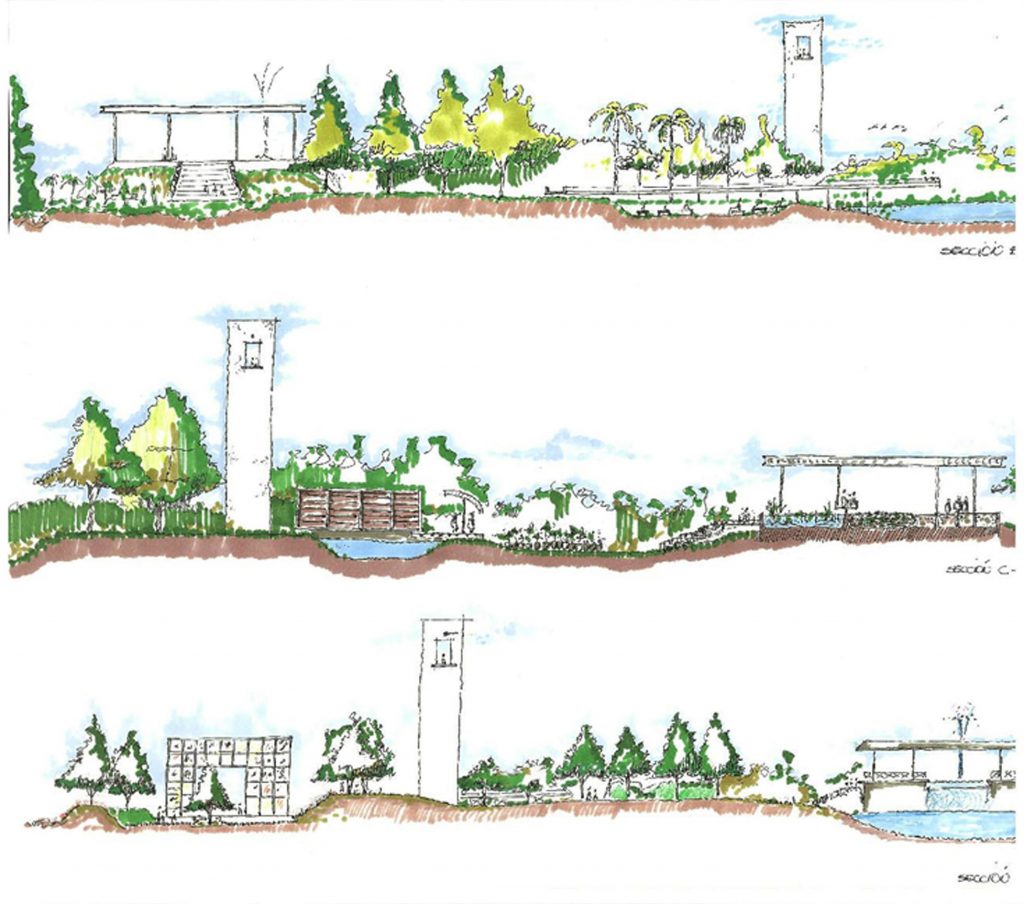 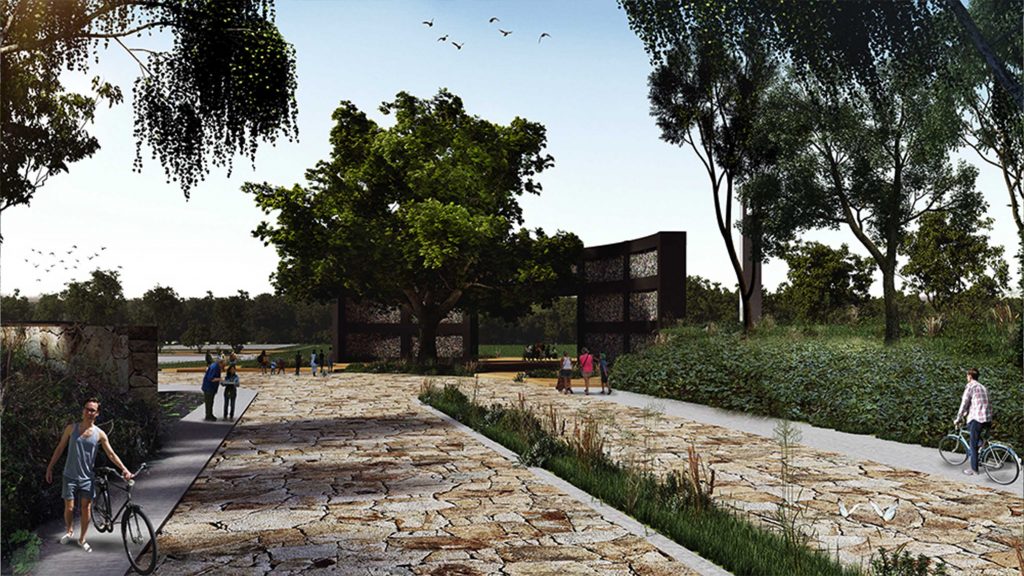 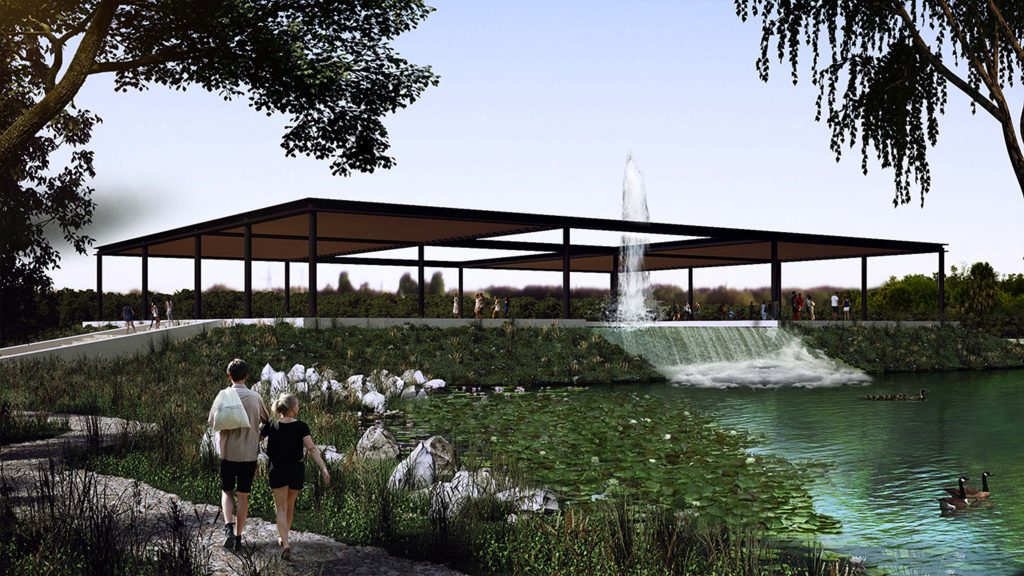 The realizat ion of a project of this nature would provide a green lung for the inhabitants of housing developments, current and future of this area of the city in frank growth and expansion, improving the visual quality of all users of the beltway, and simultaneously complet ing the sanitat ion of the site with habitat improvement, promot ing the part icipat ion of various sectors of society in recreat ion and environmental educat ion act ions in harmony with nature, contribut ing to the revaluat ion of green spaces in the urban area.