Salita Raffadali: A road that wants to be a garden

Salita Raffadali: A road that wants to be a garden

Palermo, 2018. The capital of Sicily is also the Italian capital of culture during the year. The streets of the city are crossed by thousands of citizens and tourists who discover the wonders of a place rich in three millennia of history. Dozens of events make up the culture-filled twelve-month program.

An impressive work of pedestrianization brings the city closer to the contemporary debate on the theme of public space and common goods, in particular with respect to their relations with the city. Palermo has a historic center of great architectural value, which still, seventy years after the Second World War, is plagued by the phenomena of decay and marginalization.

The debate is still alive, but the physical recovery of the historic city (240 ha.) Is still incomplete. The historic center of Palermo is both magnificent and marginal, it is a mixture of communities that share the historic spaces and fabrics of the capital and, at the same time, inhabit and animate those parts of the city that still show the scars of the 1943 bombing. 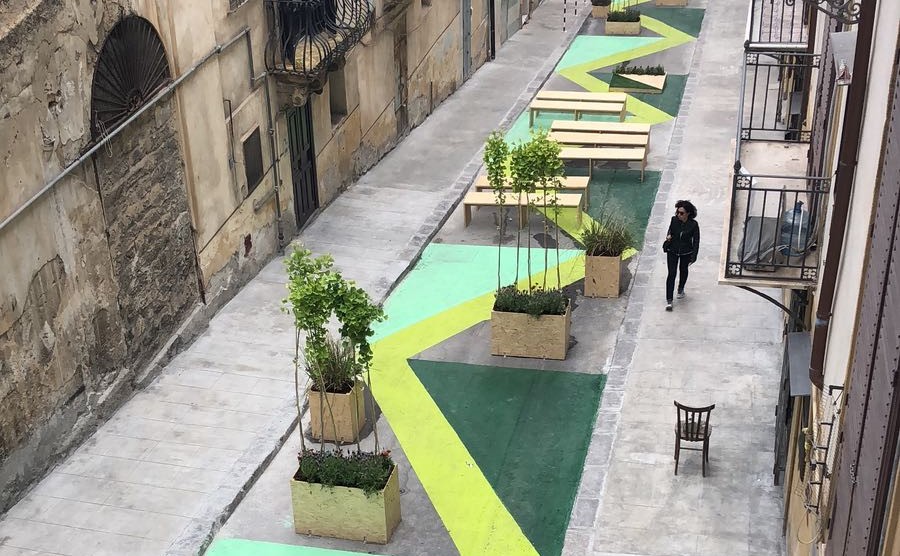 The Ballarò district is one of these places, bordering the splendid Baroque buildings of Corso Vittorio Emanuele, an ancient foundation axis called Cassaro (from the Arabic Qasr). An authentic population still lives in an alternation of ruins and restorations, today enriched by the foreign communities who have chosen Palermo, and who discover forgotten, unresolved spaces in it.

Numerous associations are active to promote these places: among these Ballarò Significa Palermo (BSP); together they have built a schedule of events to arouse new interest in parts of the historic city that do not always have the attention they deserve. For this temporary urban regeneration project, the focus is on public space and common goods, whose national day is celebrated in Italy every May 13. 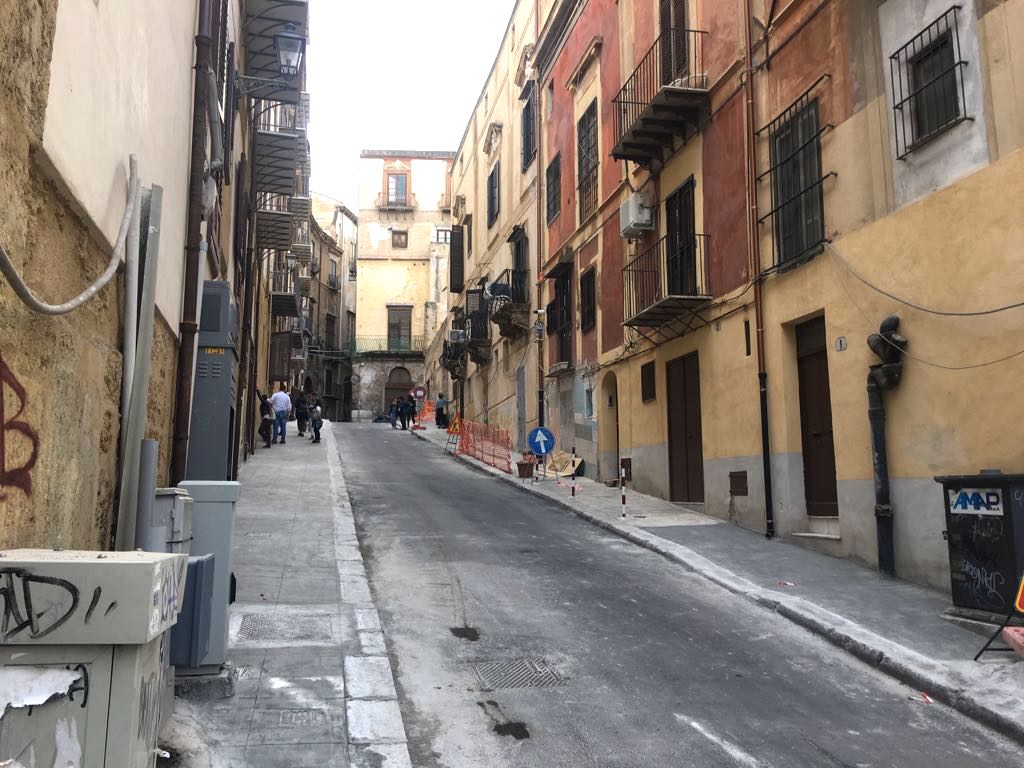 Before the works
Photography: Manfredi Leone

The intervention concerns the road called Salita Raffadali: the road, built on the bank of the ancient Kemonia river, covered in the 16th century but still rich in water today, was opened in the 17th century at the behest of the Jesuits of the nearby Church of Casa Professa, eager to have a path to more easily reach the foundation axis of the Cassaro, where the cathedral is located. 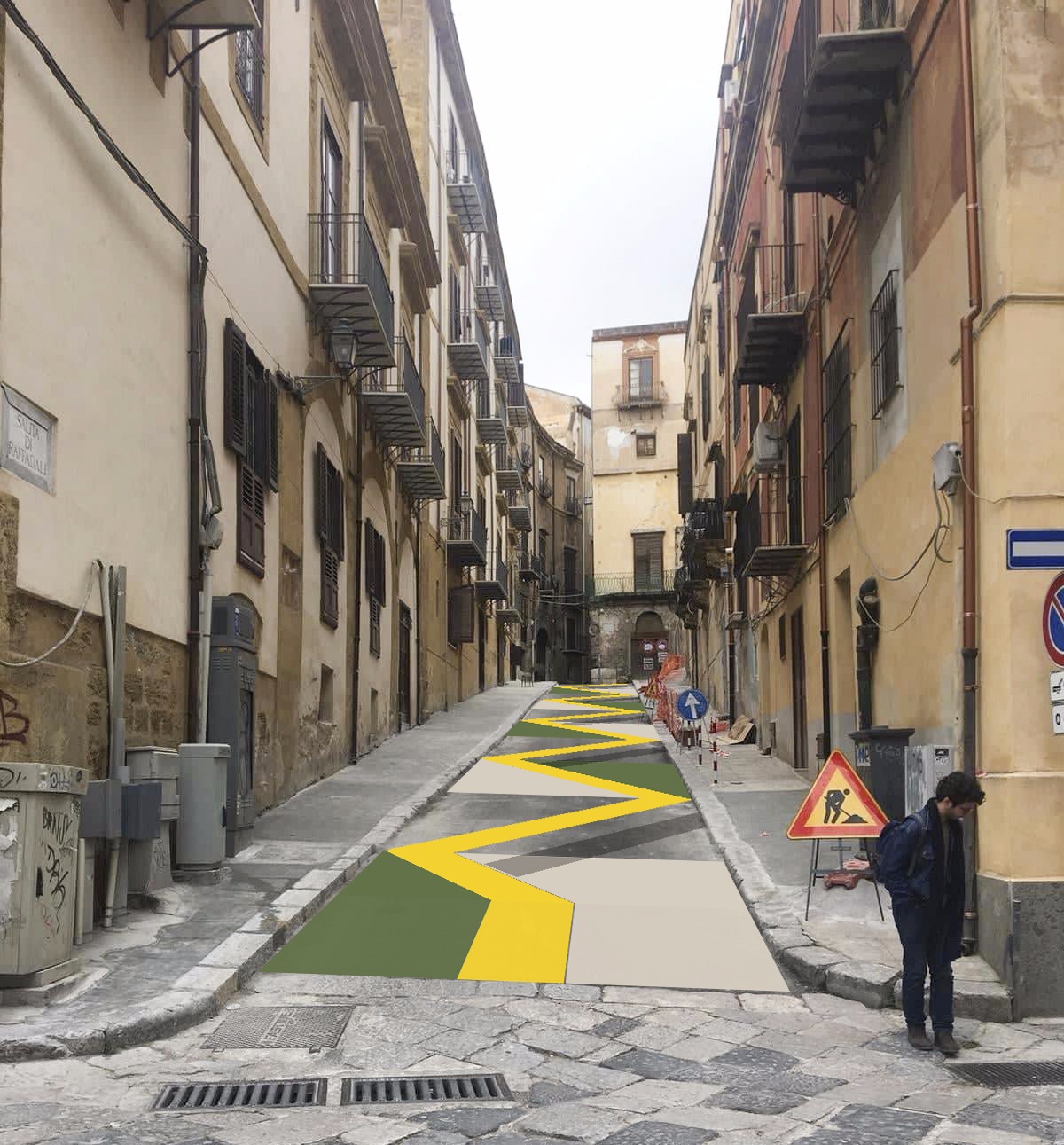 Flanked by the beautiful noble palaces of the Princes of Raffadali and Palazzo Ugo delle Favare, the road was in poor condition. Part of the hexagonal paving stones still visible in the nearby Vicolo Castelnuovo are preserved under the asphalt surface, often the sidewalks are a (prohibited) parking place for vehicles.

In a first hypothesis, the association’s request is to set up an “infiorata”, a tradition that exists in other parts of Sicily, in which the road becomes a carpet of flower petals; the uphill road is suitable, but the times and costs are unsustainable. The project therefore focuses on the theme of the road crossing, a preeminent condition for the absence of shops: few doors open onto the climb.

A new urban landscape is built, which combines the presence of vegetation, with a new function (the contemplative stop, the meeting place), and the rediscovery of the road as a new social, urban, landscape perspective.

The project takes shape with the placement at the ends of the road of some containers with differentiated heights, where new plants can be housed; in the center, a small podium and a sequence of staggered seats, give shape to a small “auditorium” that completely changes the theme of the street, allowing visitors to enjoy a new perspective on the distant church, to stop and chat, and to enjoy small collective events (readings, concerts). At the lowest of the installation is the “confessional”, a small wooden device drilled at different heights to direct the visual (or photographic) perspective, which intrigues and entertains adults and children. 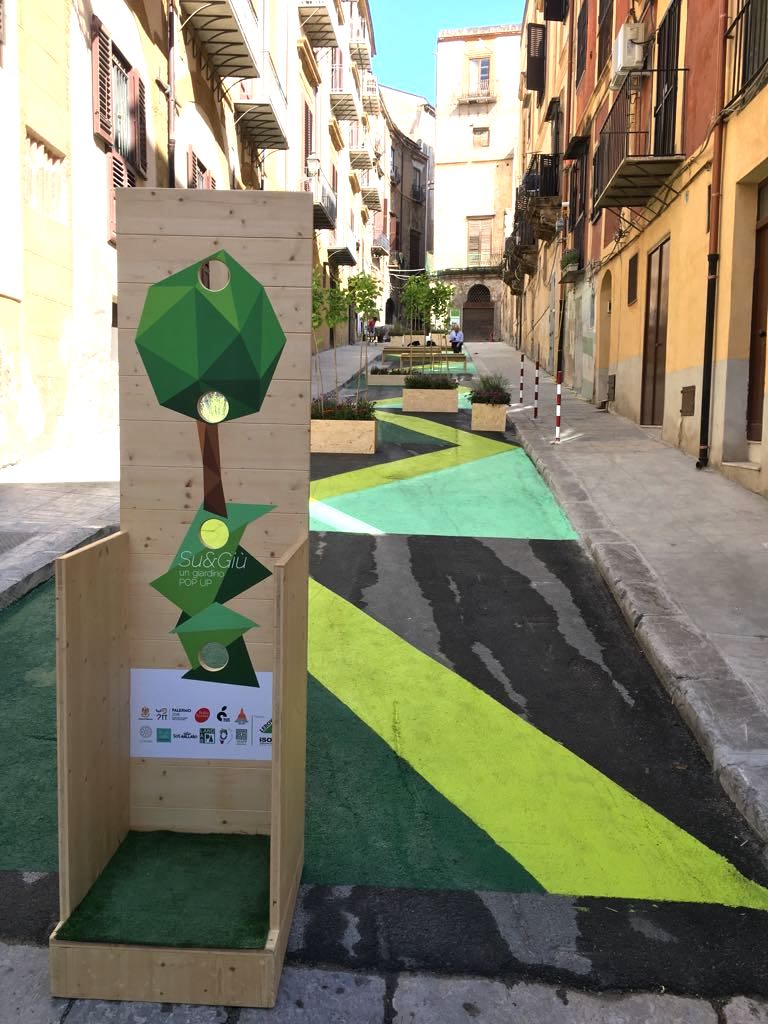 The garden from below
Photography: Manfredi Leone

The plant theme takes place on parallel and intersecting levels: on one hand, the idea of low maintenance (with the presence of grasses such as Festuca glauca and Gynerium), on the other hand, the food theme of the garden through the aromatic herbs (Salvia rosmarinus and Salvia officinalis) which are accompanied by the synergistic Tagetes, Verbena l., Salvia splendens and Lavandula stoechas which make up twenty-four marvelous specimens of Ginkgo biloba, an ancient tree with renowned qualities which – with its very green foliage – forms a system of scenes that build new perspectives.

The need for immediacy, the temporary nature of the installation and the need to keep costs very low, pushed the project to use wooden materials: OSB and plywood panels, with which the furnishings were made. 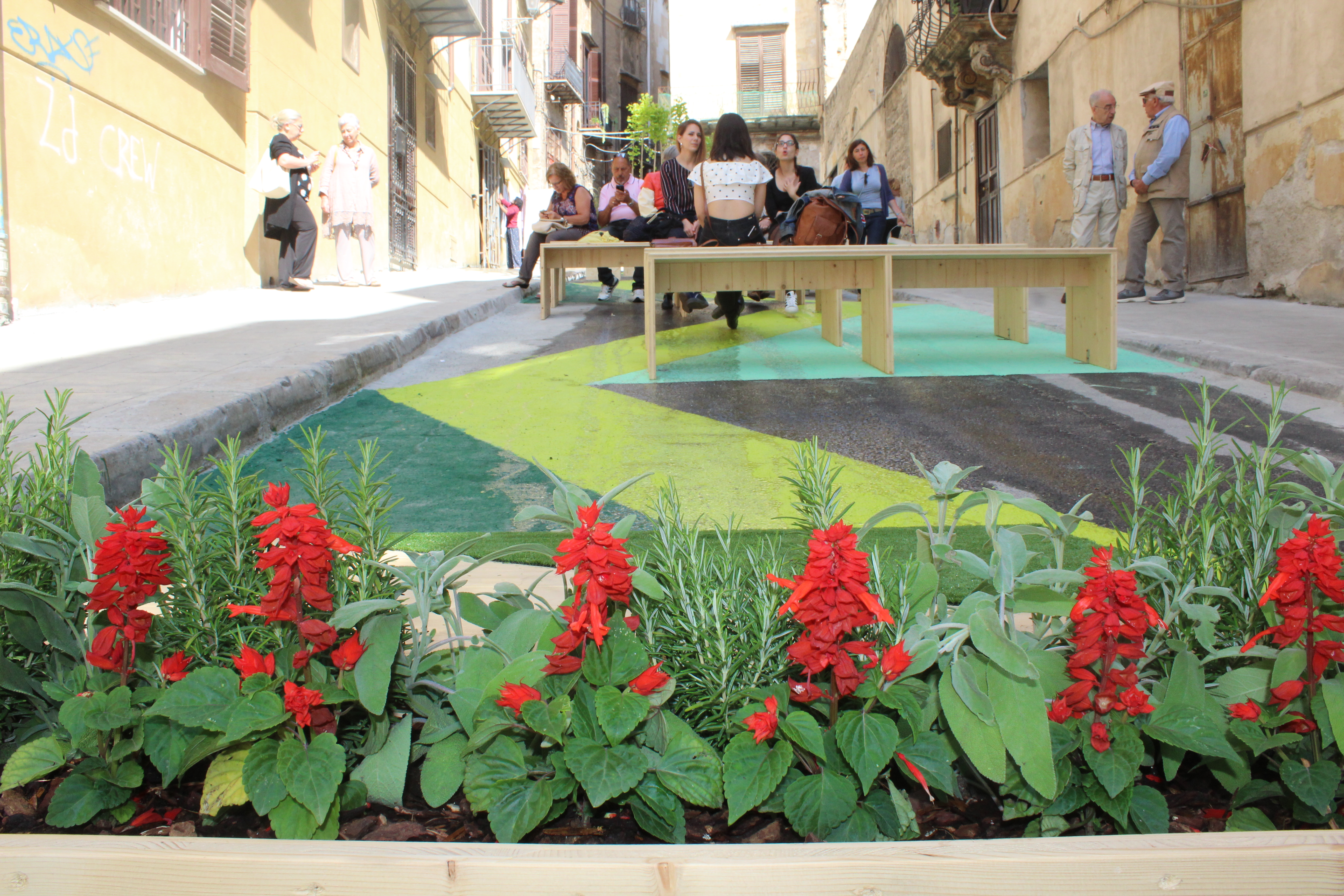 The soil was painted, treated in a landscape key in the manner of Roberto Burle Marx, a painting created with the collaboration of the students of Architecture who attend the Landlab – Landscape Studio of the University of Palermo and by the volunteers of the Orto Capovolto Cooperative.

The soil aims to build the new landscape of the climb, a 2.0 flower show, replacing the sadness of bitumen with an explosion of colors and paths, which visitors and inhabitants can walk freely: we have seen children and teenagers running along the zigzag of the new design.

The results of the work can be summarized in a few key words: Activate, to have rethought Salita Raffadali and its role of urban connection in a contemporary key, involving the residents in building the place and taking care of it; regenerate, for the impulse to recover the valuable role of this path, battered by decay and lack of maintenance; interpret, for its place in a diversified and complex social space, and for its role as a new social scenario; re-naturalize, because despite the modest amount of vegetation, a small gap opened on the theme of the presence of plants in historic centers.

“A small gap has opened on the theme of the presence of plants in historic centers”. 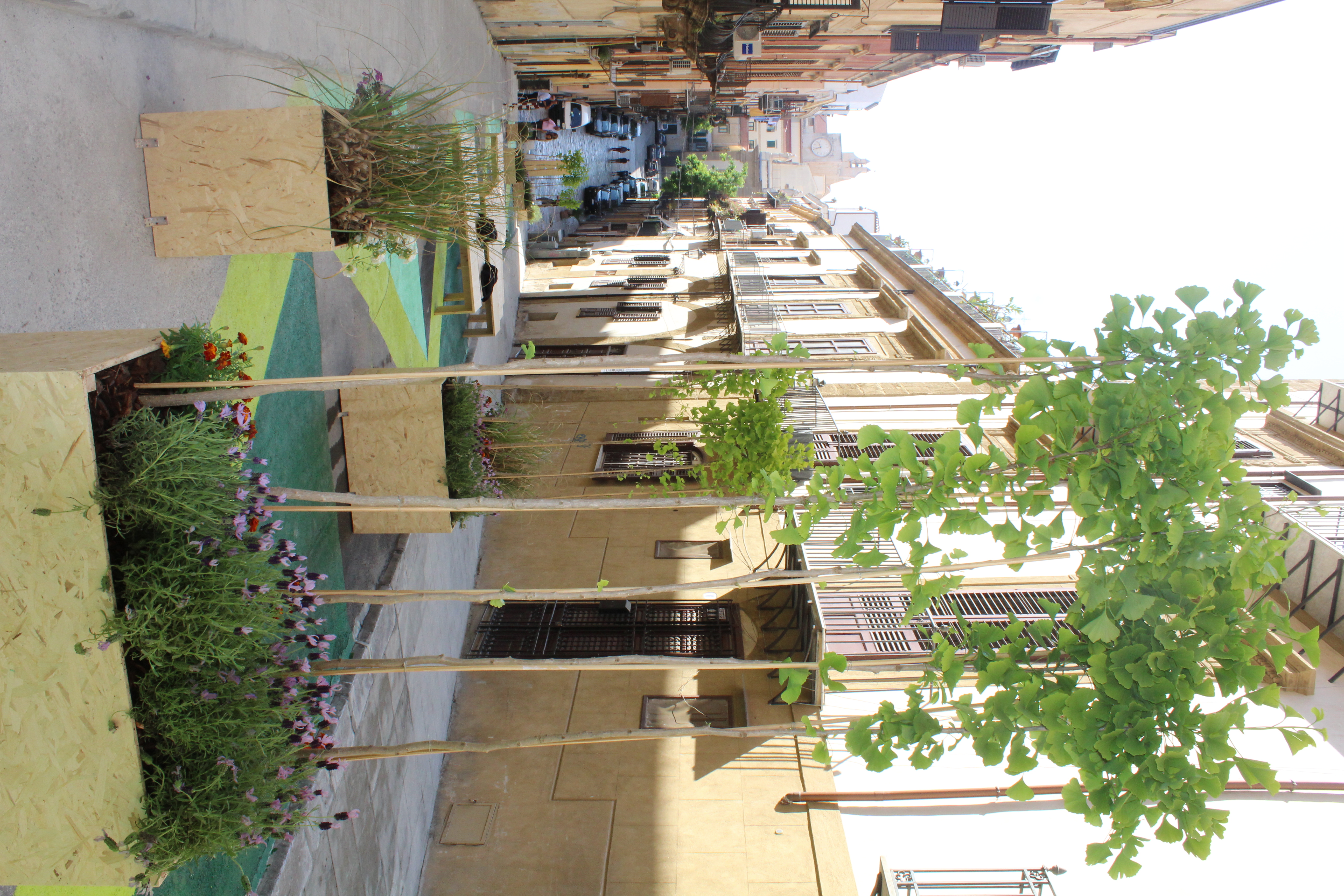 The garden from above
Photography: Manfredi Leone