Restoration and landscape improvement of the Stone Bridge in Bustarviejo, Madrid

Restoration and landscape improvement of the Stone Bridge in Bustarviejo, Madrid

The Stone Bridge is located in a natural area of great beauty of the Madrid’s Northern Mountain Range.

It is part of a network of trails that connect it with the rural core of Bustarviejo. Very frequented by walkers and cyclists who are attracted by the cultural landscape of a location of indubitable natural beauty and monumental attraction.

The bridge is about five kilometers from the Bustarviejo town, located in a rural area; nevertheless it was unknown to most of the inhabitants before the restoration.

Built in the early twentieth century, made of masonry, granite ashlar and brick vaults, the Stone Bridge is a small example of the ashlar bridges typology of half the nineteenth century in Spain. In the 80s, after the road was diverted towards a new viaduct construction, this place was in deplorable conditions of abandonment, and over time, the structure of the bridge was practically buried by stream sediments.

Project developed between July 2013 and November 2014 as part of the Madrid’s Community Bridges Plan of the General Directorate of Heritage and the Tajo-Segura Hydrographic Confederation. 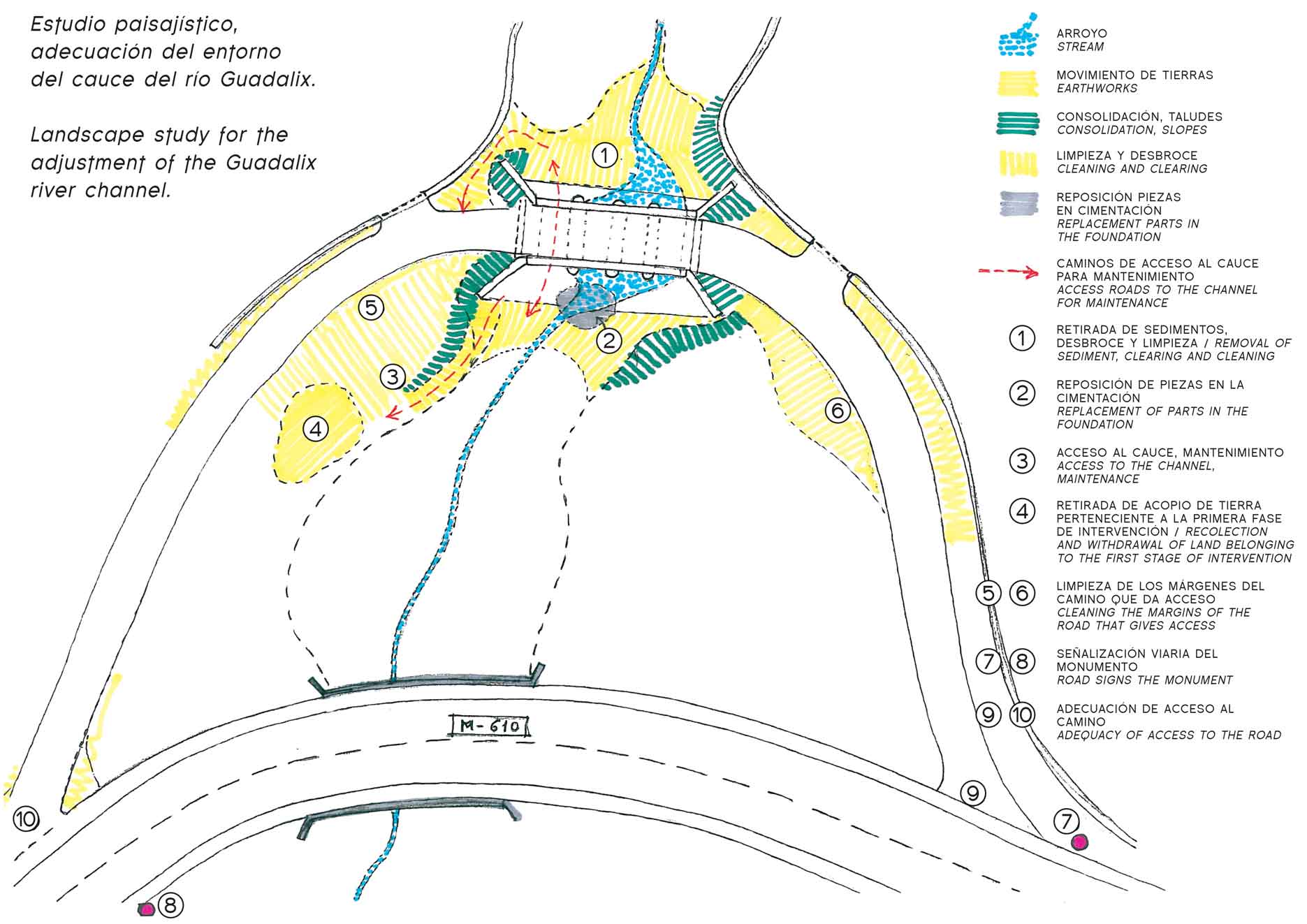 The bridge’s bottom structure was almost entirely buried the first time we visited the site; three of the four spans were obstructed by the channel sediments and only a narrow trickle of water flowed under the bridge.

The stone base that served as a foundation was completely ruined. In addition, grass and shrubs had colonized the bed of the stream, and from the road, the sight of the bridge was practically hidden behind the vegetation. 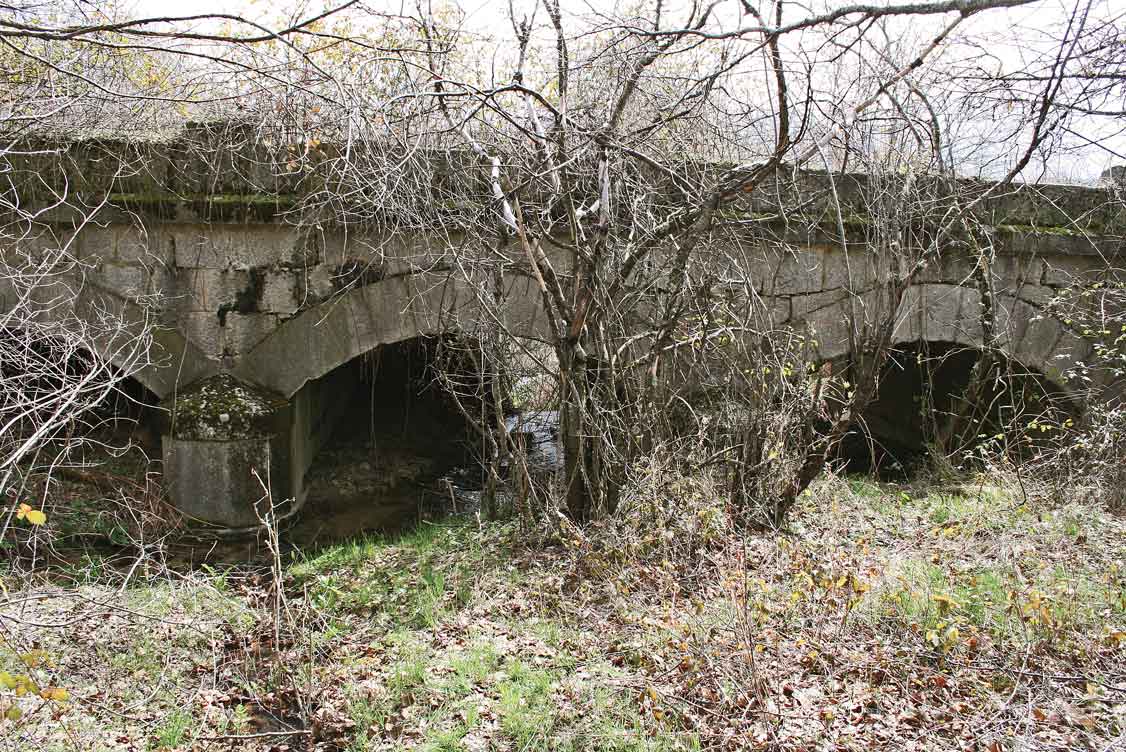 The first stage, which took place in the summer of 2013, consisted mainly of the restoration of the monument.

First, excavation works were carried out in order to remove part of the soil under the spans plus the thick layers of asphalt and concrete from the roadway. Afterwards, wall surfaces were restored, performing a light cleaning of stone areas and repairing damaged materials, mainly mortars and bricks.

The missing pieces of the parapet were replaced with new ashlars carved in white granite that reproduce its original form.

Finally, the board was repaved using a mixture of cement and lime to replace the asphalt. 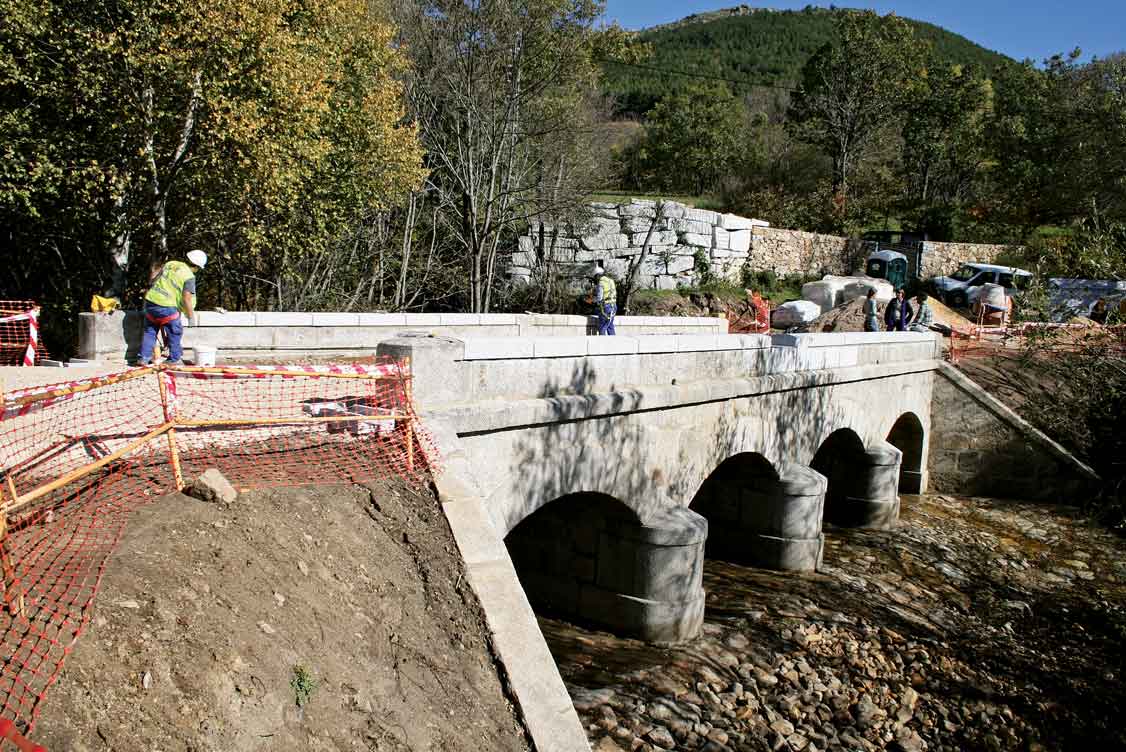 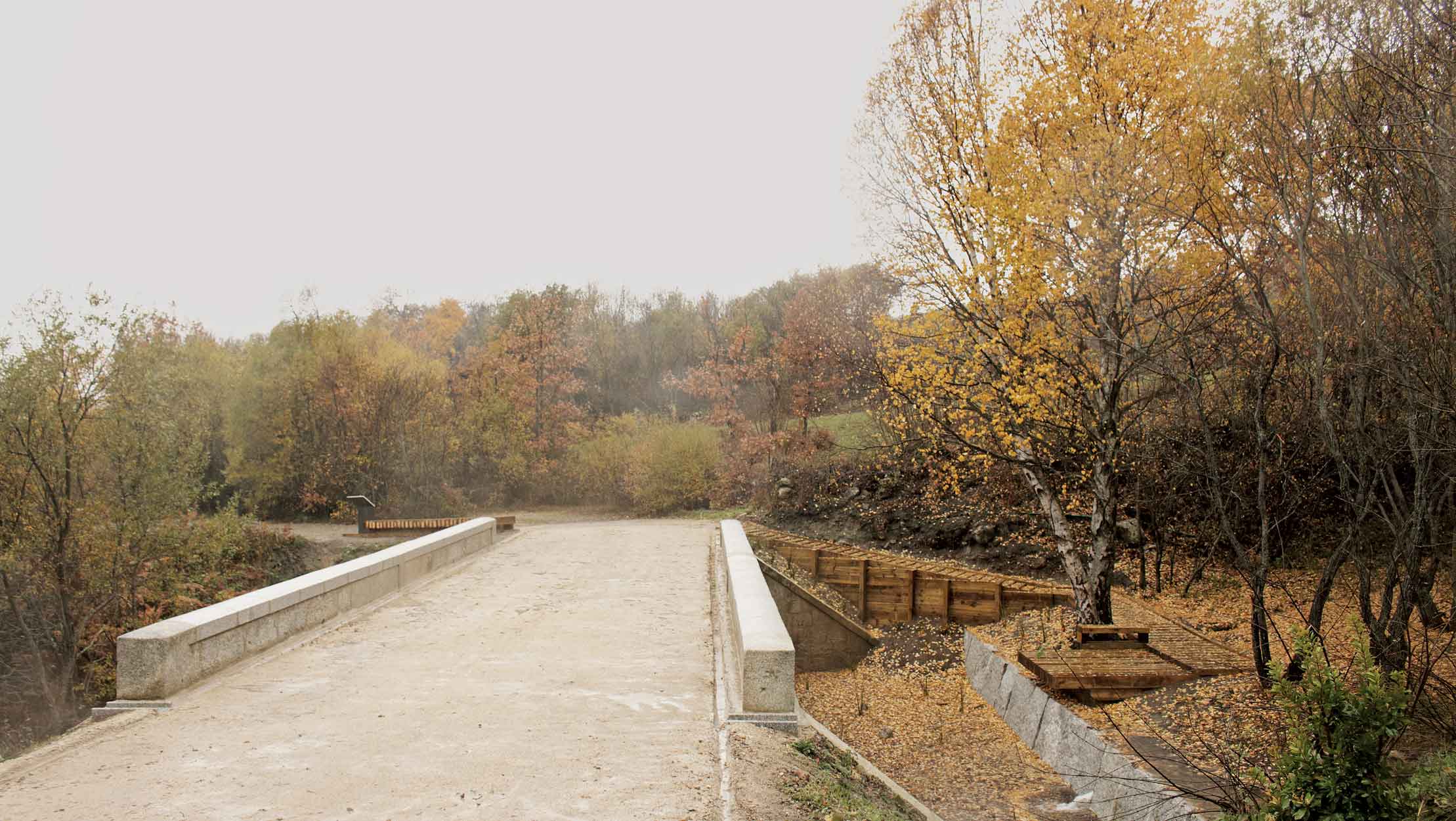 The second acting phase was performed the following summer in order to improve environmental conditions in the surroundings of the bridge.

An important excavation was carried out in the bed of the stream, which then required a reconfiguration of the slopes of the creek’s banks and the environmental conditioning of their immediate surroundings.

It was also necessary to build a dam, aiming to contain the spread of sediments, a phenomenon that was extremely aggressive to the landscape. 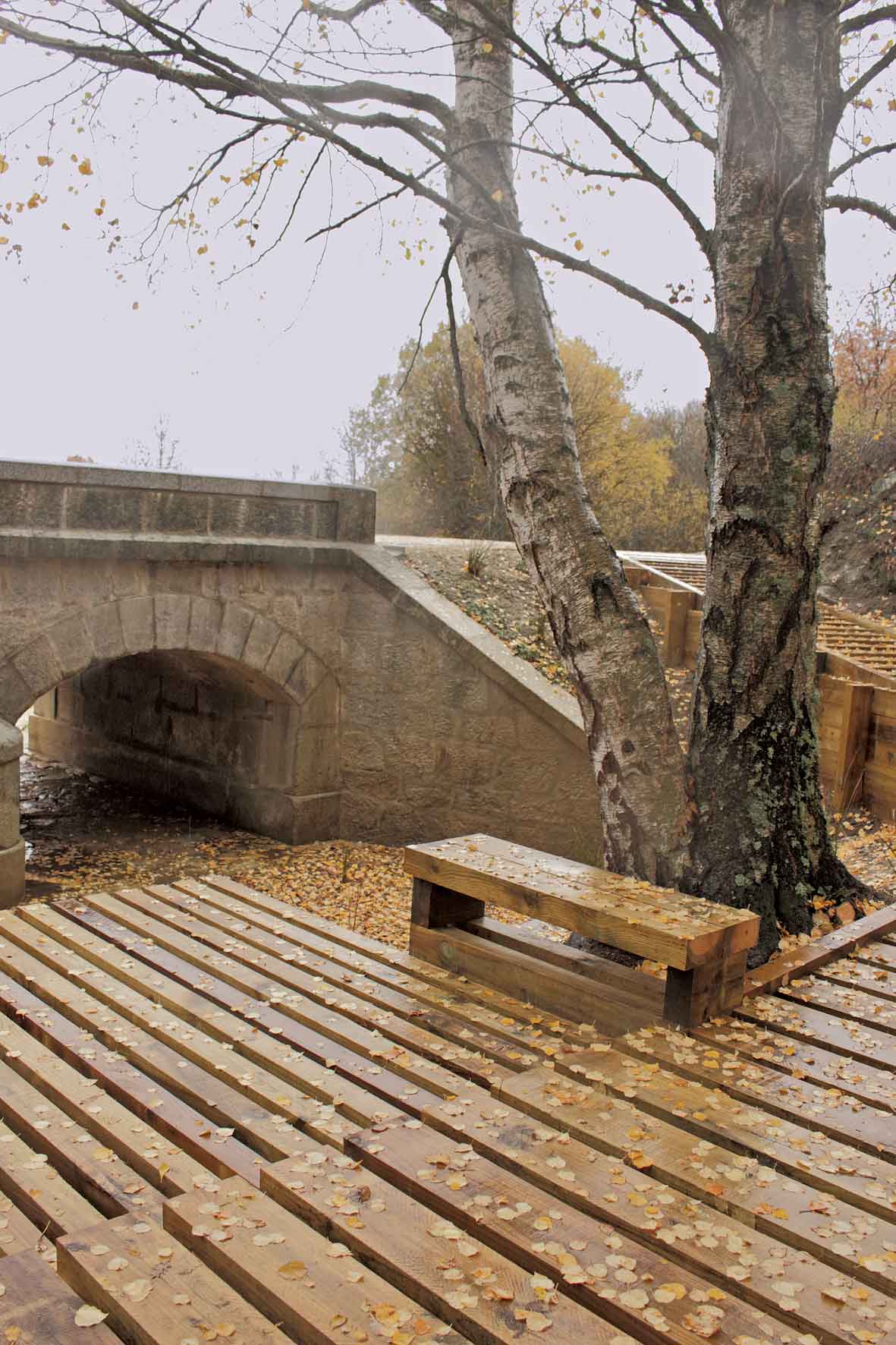 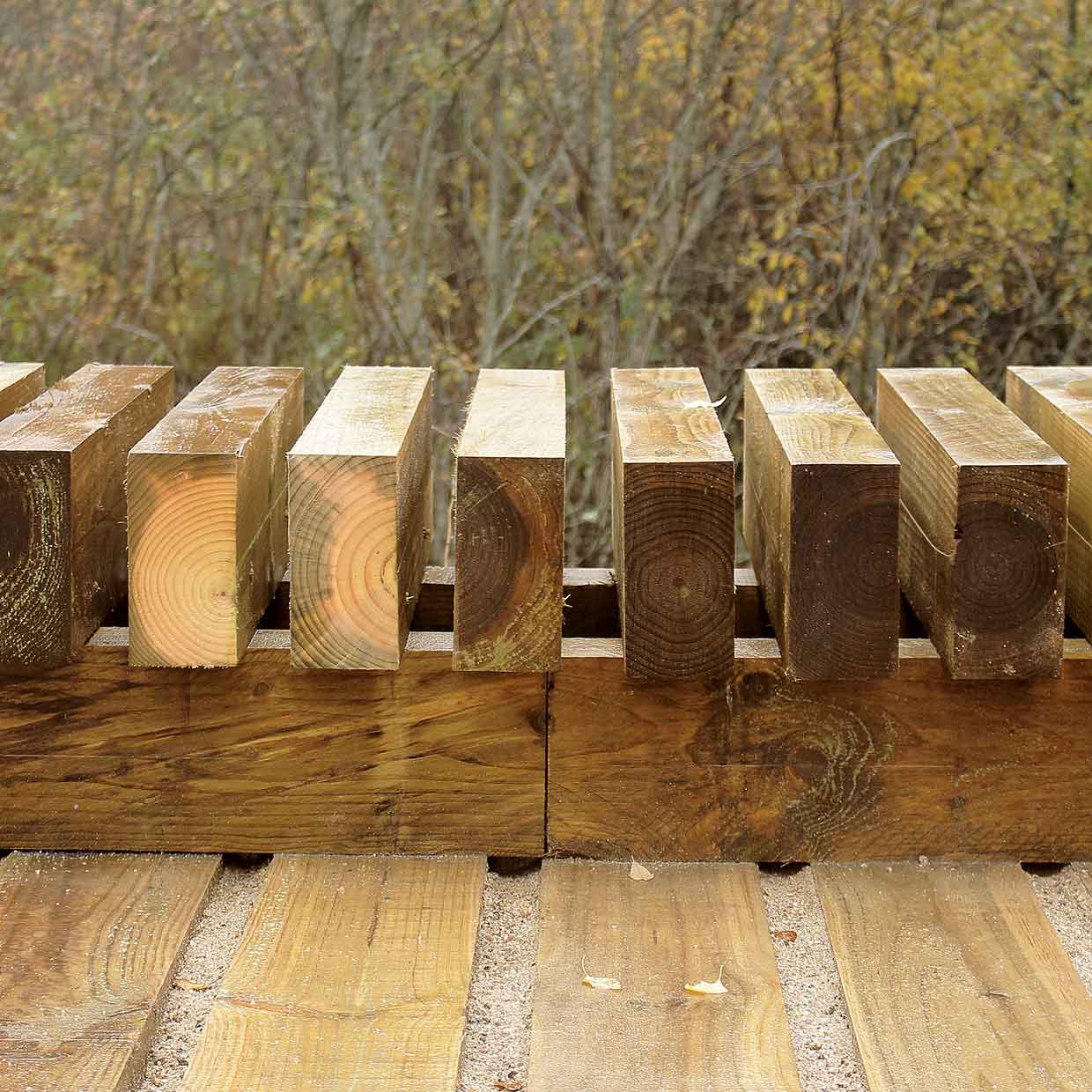 These circumstances led us to consider that in addition to the restoration project we should plan the relationships of the bridge with its context, revaluing it as a monumental piece in a natural environment with undeniable potential for eco-tourism.

With this objective, we proposed the creation of two seating areas from which it would be possible to contemplate the bridge and the surrounding landscape.

One was constructed by the road and another along the stream that, with the access path, should allow the integration of the new stone dam in the landscape performance. 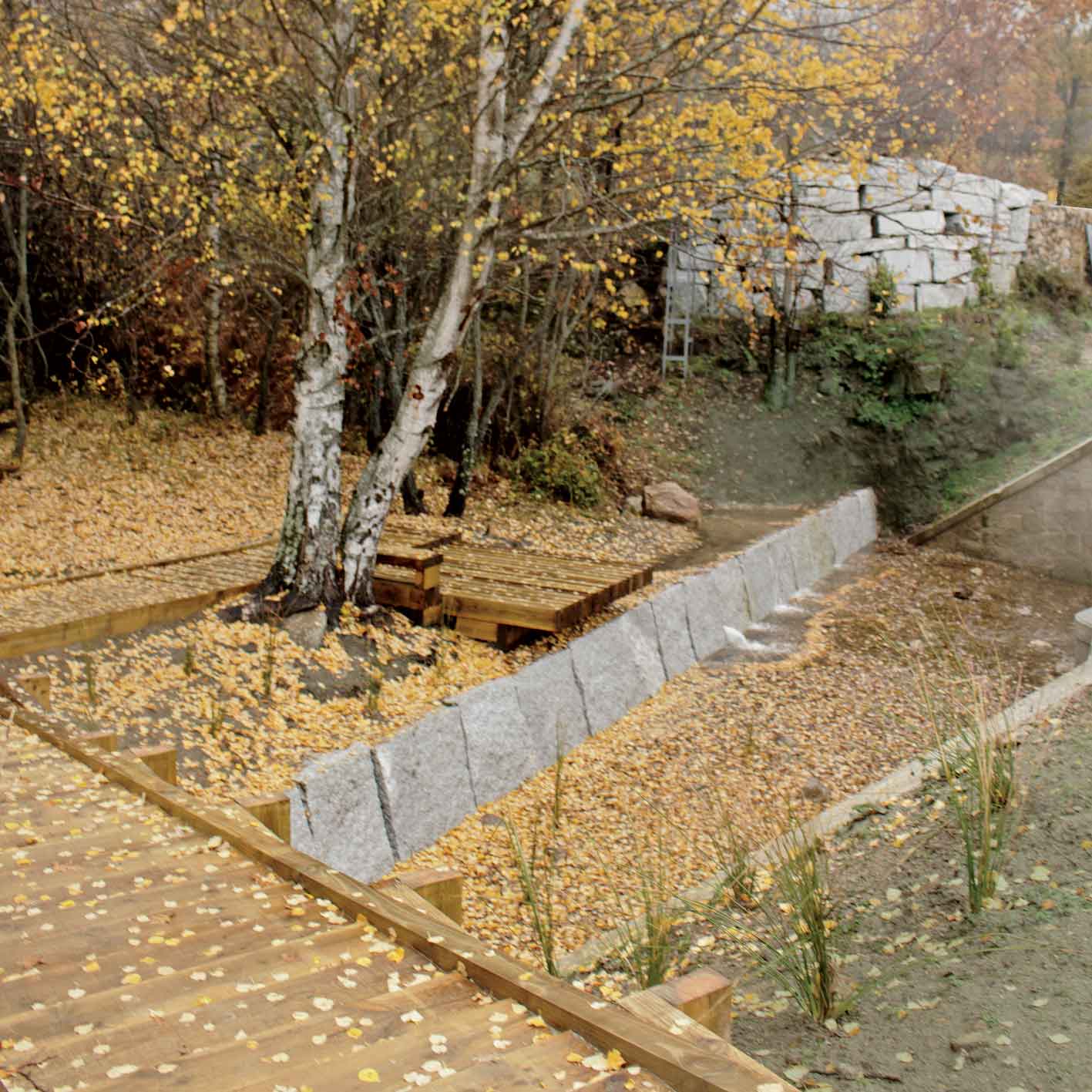 The architectural solution was to insert in the place a number of elements that could be boldly integrated as part of a work of “Land Art”, and that simultaneously, thanks to its simplicity and speed of assembly, would allow reducing costs to a minimum.

Constructively all elements respond to the same system made almost exclusively with eco-sleepers of wood.

Due to the economy of time and means, the possible variants of the system are based on the different positions of the pieces themselves, placed sometimes edgewise and others sideways; stacked or placed in alternate positions. 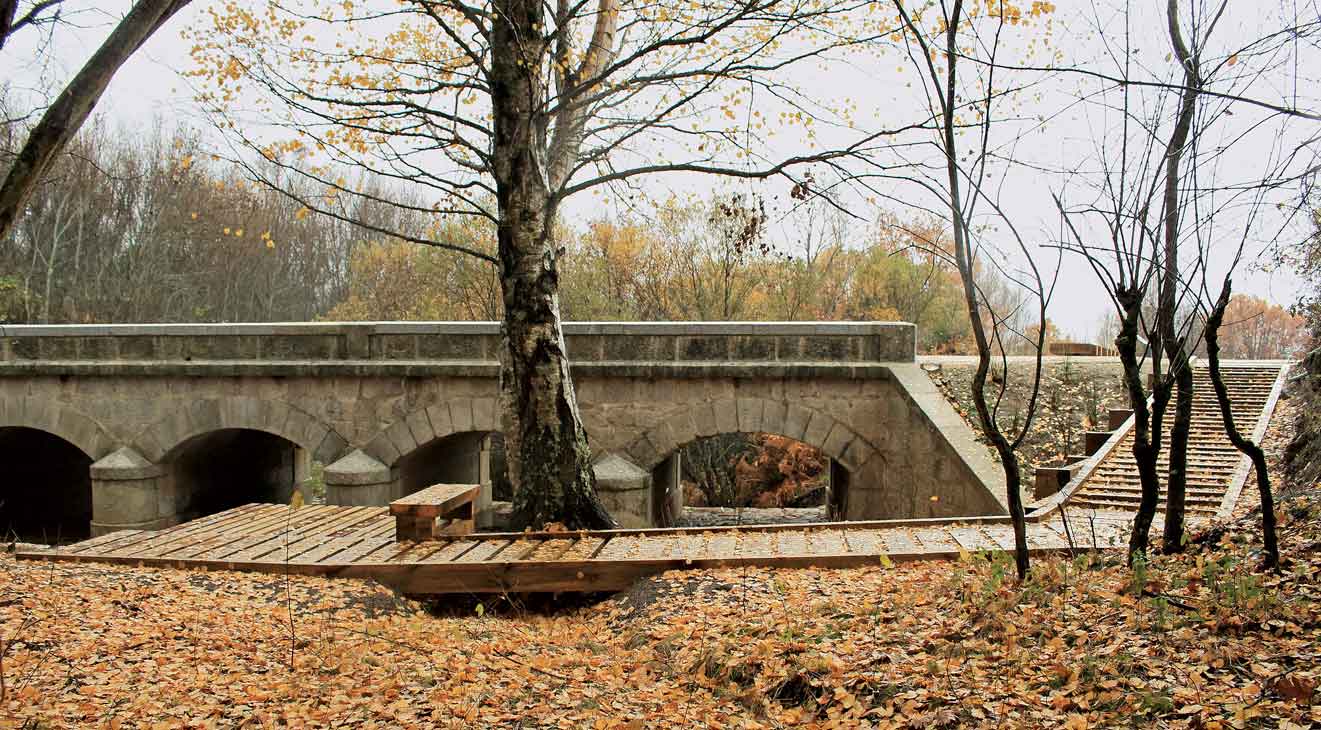 These rough and bare wood pieces over the stream bed was one of the intuitively searched images, but later we understood that it was actually an incomplete work: now it was time for nature itself to continue the process, to wash out the wood, to twist it, to splinter it, to embed it with lichens and take out all possible hues of a piece in constant evolution.

After the intervention, we believe that the monument has revalued the context in which is located.

A monumental piece surrounded by a scenario of undoubted natural and cultural qualities, it is a part of the landscape, and therefore its rightful identity has been retrieved and reinforced.