Hacienda Tamchen: The Importance of Water in Design

Hacienda Tamchen: The Importance of Water in Design

We considered that certain elements should be included to create a brand identity, so they could be identified as a set, and differentiate themselves from other interventions in haciendas done by the same group of investors.

With this purpose in mind, certain architectural and landscaping premises were followed: first, to preserve the ruins in the state that they were, and consolidate the parts that were at risk of collapse; second, make interventions to ensure a good functioning, with contemporary architecture; third, to redefine the landscape using the pre-existing spatial structure; and finally, to convert these places into a remedy for the climatic and orographic conditions of Yucatan Peninsula, which are described below. 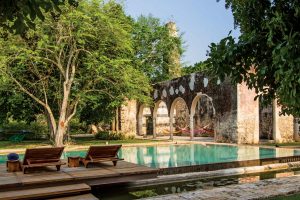 The former machine house and chimney, both part of the old hacienda, now are the master suite.
Photography: Barbara Woodworth

This is a great flat laja (limestone bedrock), with no mountains or superficial rivers but surrounded by water because it is a peninsula, and has a huge amount of subterranean rivers that flow underneath it providing water for a lot of cenotes (sinkholes).

In the early XIX century, the production of henequen (back then known as “green gold”) reached its peak; haciendas had various very well defined spaces for processing the henequen fiber soskil: main house, machine room, chimney, fiber drying area, and often an orchard that was used for self-consumption.

The water was extracted from wells connected to the underground water mantle located at an average depth of eight meters and was stored in big tanks and cisterns.

These tanks were used to carry water, using gravity, through irrigation channels to reach all the different places where it was needed. Many of these were preserved in a good state, so they became defining components and elements of reference for the projects. 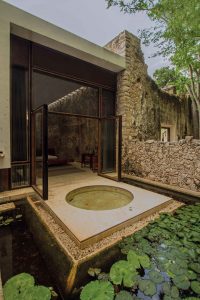 Everything previously described, in a summarized form, opened the way for using water as one of the project’s main elements and as a recurring theme.

This relation with architecture can be perceived strongly in Tamchen, making it the concept’s main reading. In this case, water was used not just for watering or consumption, but it became a worthy companion of the architecture and a connecting element for the other four locations.

We used every excuse to celebrate this water-landscape-architecture relationship. 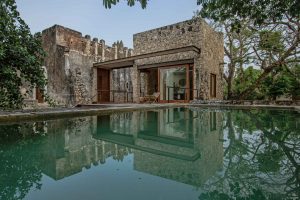 In the main house, due to its functioning during its productive period, key spaces were located in the upper floor; their state of decay presented an opportunity for reorganizing its use and transforming the inner spaces with collapsed ceilings into garden areas and a spa with an indoor pool. In this region, the sun is so intense that sometimes one desires to be in a protected space, more intimate, more like the semi-open cenotes (sinkholes)

where this special relationship between inside and outside can be enjoyed. The tank which rises almost two meters above ground level was used as another private pool which can be accessed from the upper story of the main house or “patron’s house”.

The drying patio, located at the center of the old and current activities, became a big aguada 1, inside which a water container floats united to the walking paths by a wooden “dock-sun terrace”. 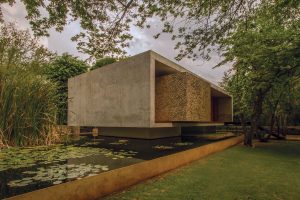 The villas were built above a big water deposit that serves a double propose: pond and roofed pool. It appears as if this new construction floats above the water, sustained only by two columns, which at the same time define the use of each section contained in the big pond. The duplicity effect achieved makes space appear larger.

The use of water in the design of the exterior areas assumes a greater relevance if we think in the vaporization process that takes place. Increasing the humidity degree in the surrounding areas helps to lower the ambient temperature. This creates a very favorable microclimate for vegetable elements.

The celebration in honor of this element, which we apparently lack, but has been so vital for the development of our culture, is the great achievement of the project. 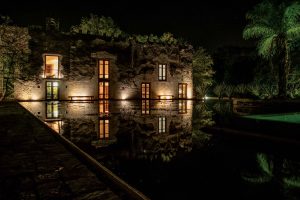 Its presence gives strength to other spaces. Its reflecting quality causes them multiply and makes the trees, constructions, and sky somehow embrace the inhabitants, it pushes the verticality and horizontality to become irrelevant. Everything melts into the same architecture. Nature sings because we have made the great offering. The inhabitants lose the sense of time, whether they are singing or meditating.

I think there is not a more pleasing and comforting element than water. Around it many fables have been written, over its reflections we can see time pass and the weather change. In here, one can dream that someday the great Chaac, Mayan god of water, may descend to bath and witness that the sacrifices and offerings made in his honor have made us more sensitive to the most important element for the survival of mankind.