Light, Painting and Landscape: A journey through art

Light, Painting and Landscape: A journey through art

For example in Europe, the discovery of landscape in painting corresponds to the development of linear perspective. It is the testimony of a certain perception about the world that is established in the fifteenth century: a gaze that takes distance from things and establishes them gradually in an objective environment, detached from the subject.

In the United States, it was necessary to wait until the 19th century for the wilderness (which was once an abominable desolation) to be celebrated as landscape. On the contrary in China, the landscape genre is called shan-shui, which we could translate as “mountains and water”.

Chinese landscape painting responds to a vertical dimension where the western horizontal proportion is replaced by a vertical staggering of the planes.

If we focus on the western aspect of landscape treatment, we can affirm that the pictorial genre knows a new start point toward the end of the nineteenth century.

It is not inspired by biblical scenes as in Renaissance painting but begins to draw inspiration from the whole of the real landscape and the sensations obtained by the meeting of man and the landscape.

This sensation is theorized by Georg Simmel with the name of stimmung, which corresponds to an atmospheric encounter of the landscape with the state the soul of the spectator. 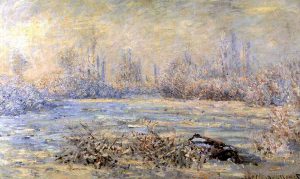 It is the arrival of photography that generates a landscape pictorial thought modification, since it is intended more precise and more realistic than painting or drawing.

Thus, in order to continue their existence, painters have no choice but to reinvent themselves and leave aside the exact representation of landscapes, to give rise to their emotions and create more personal abstract spaces.

The photograph entailed a transformation of the sensibility that derived in the Impressionist current. 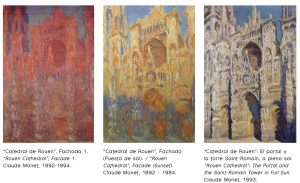 At that time, the humanity attended one of the greatest changes in the image in the history of Western civilization after the Renaissance and the discovery of perspective.

This change affected mainly the way of treating the light in the painting. If the landscape is taken at this time it is because its main theme has always been the light. The landscape takes a form of purity with respect to its essence itself, to the extent that it is derived from the hegemony of history, myth, religion.

The landscape becomes a subject in itself. In fact, the human body is excluded from the landscape to completely disassociate them.

What is then possible to represent? Light in its changing state throughout the day. It is what generates for example the series of Cathedrals of Rouen of Claude Monet.

The landscape is then considered as a phenomenon that is the encounter of the world with a point of view in a specific moment. To observe is not only an aesthetic contemplative act but it becomes an act of thought.

If we think of the landscape, we come to the conclusion that the orientation in space arises from the encounter of two characteristics: the verticality of the human silhouette and the horizontal line of the horizon.

The lived landscape is limited by an edge that is mobile and reversible and depends on our vision. Now the painted landscape is the “frozen” moment of this lived moment. However, the meeting of these two characteristics gives rise to the landscape conceived by the abstractionists.

We consider here Barnett Newman, Kandinsky and Mondrian. These products of pictorial modernity then thought of what is irreducible in the notion of landscape and deduce that light is always present.

In the twentieth century there is no disappearance of the landscape in abstraction, as we might think, but a profound mutation of it. The landscape is no longer figurative but is transfigured and reconfigured according to an organization that has nothing realistic, but can become aesthetic.

The landscape is reduced to its essence: the encounter of the horizontal and vertical line, as well as of course the color that derives from the changing light. The landscape then becomes an unstable, subjective and personal reality.

Ronan Meulnotte is a young art historian. His interest in transparency as a phenomenon has led him to develop an innovative research in the field of architecture, design and art. In this article we present a retrospective on the light in the landscape in artistic representations, which will be modified from the avant – garde movements of the late nineteenth and early twentieth century.