From the faunal elements present in landscape, there are numerous species that are active duringthe night and remain hidden in resting sites during the day. Each of these species has specialized adaptations for its nighttime activities (for example, heightened senses).

Despite that most of them provide a variety of essential services from pest control to plant pollination, people generally tend to fear and misunderstood them due either their nocturnal habits or their appearance, inspiring different cultures imagination to create myths and legends. 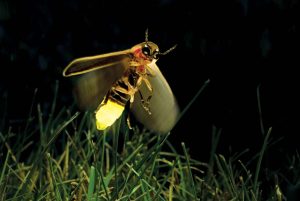 Fireflies are a family of beetles known by their ability of producing bioluminescence, both in adulthood and larvae state, using specialized organs located in their abdomen.

Their light is usually intermittent, and flashes in patterns that are unique to each species, using it to attract the opposite sex or a prey, or preventing their predators about their bad taste.

About 2,000 firefly species have been discovered, living in a variety of warm environments, preferring areas that retain moisture. Being known in Yucatan by its Mayan name, cocay, there is a short legend that narrates how ancient Mayans believed this insect obtained its characteristic light. 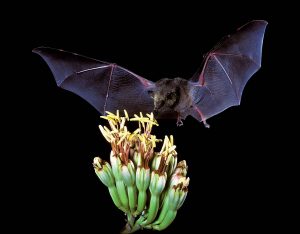 They are the only mammals able to fly, thanks to have modified their arms and hands into wings; although they aren’t blind, they make use of sound to orient themselves in space through the process of echolocation.

They can live in large groups or in solitary, in a wide variety of places like tunnels, caves, leaves and tree branches, among others.

Due to the existence of three hematophagous species, people tend to confuse bats with vampires although the majority of the species feeds on insects, pollen, nectar, fruits, fishes, birds or other mammals, being important pest control agents, seed dispersers, and pollinators, contributing to the regeneration and maintaining of ecosystems.