Intervention on the 2nd section of the park. Master plan for rehabilitation of Chapultepec forest.

The 2nd Section of the Chapultepec Forest was inaugurated in 1964, it is located between the Anillo Periférico and the Cementerio de Dolores, and it has an approximated area of 180 hectares.

In this section of Chapultepec several high-value infrastructures of Mexico City converge, such as the drinking water collection and distribution tanks of the Lerma- Cutzamala System and the first Waste Water Treatment Plant, built in 1956. 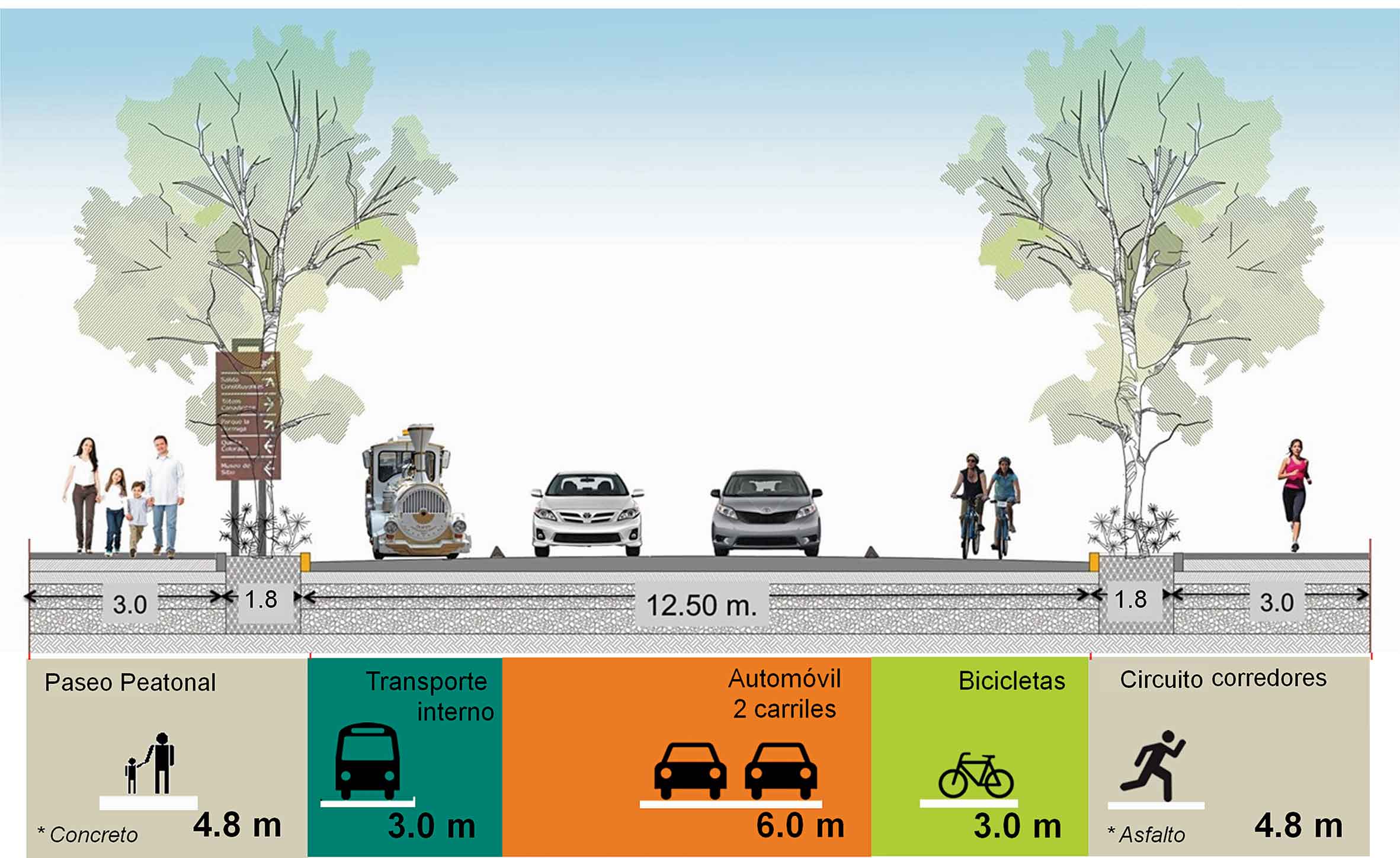 Nevertheless, through these 50 years the Chapultepec Park has suffered changes, decay, installation obsolescence, loss on its attractive and quality, together with the lack of control regarding the informal commerce.

Other critical aspects of the Park were the pedestrian access difficulties, the road network monopolization done by the buses and cars, the over-saturated parking network, and the continuous crossing of vehicles through the Park, used as a shortcut by the people from nearby urban areas.

A group of monumental fountains, most of them in disuse and deteriorated, are among the most important assets of this transcendental public space of Mexico City, besides two lakes, of great shape and proportions, currently with low-quality water levels.

A Master Plan is proposed which is organized in an integral and interrelated way, and has four main guiding principles:

By rearranging the internal road network, parking spaces, internal collective transport and giving space to diverse types of mobility like bicycle path, jogging track, crosswalks and new sidewalks. In sum, a “total street” that is capable of providing a new structure, order and image to the Park.

A circuit of 3.5 km was designed, it contained “square streets”, special urban furniture, signaling, and the planting of 500 jacarandas trees and a continuous section of herbaceous plants on both sides, creating a big walking circuit in the Park.

Inside this thematic axis, the construction of a new water treatment plant and an irrigation system is in process, it also includes the re-orientation of the lakes so they can function as cisterns for irrigation. This will give in a nearby future the possibility of having enough water for irrigation and lakes with good water quality.

On this topic, the complete reorganization of the informal commerce system was contemplated, by relocating new kiosks specially designed for the different kinds of commerce, also taking into account the hygiene standards and what is necessary for providing a better service for the custumers. (The kiosks were designed by Constructora EVISA)

By performing an analysis of the green areas, it was possible to structure sub-sectors, where each vocation and location was defined, according to its location, interaction and current state.

The intervention strategy was conceived for starting the works in the outer areas (perimeter) and then continue to the inside areas, the more deteriorated areas. In this way, the front towards Avenida Constituyentes is intervened first, thus configuring new pedestrian access squares on both sides (west and east), also a new skate park, a child playground and picnic area.

Later on, the western area of the Park will be intervened, and so on, until this great public space is fully rehabilitated. 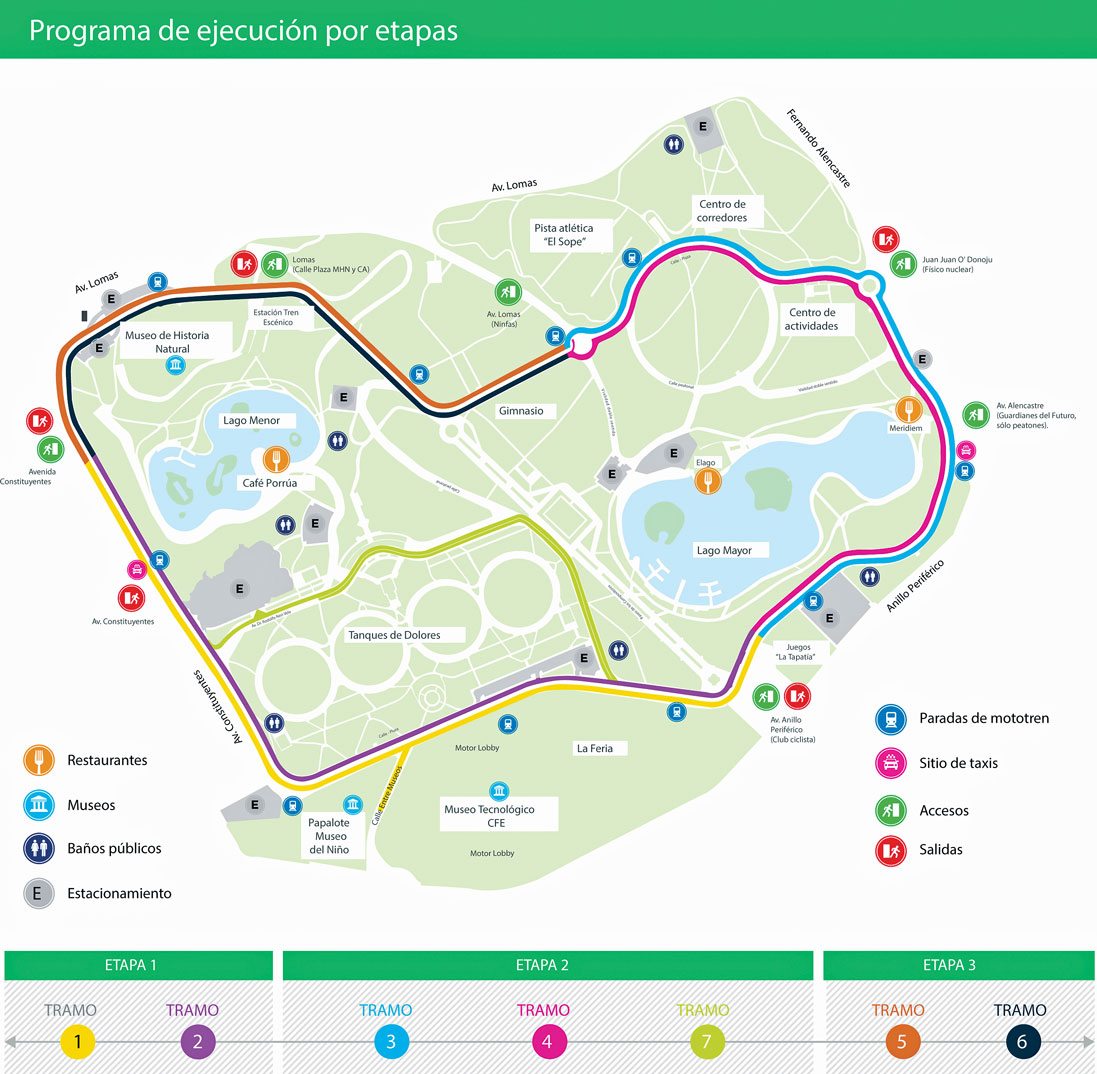