Recovery of the ridge in Jardines del Pedregal

Recovery of the ridge in Jardines del Pedregal

1945. The architec Luis Barragán bougth, along with José Alberto and Luis Bustamente, a large área of land south of the city,where he designed an urbanization and the innovate the gardens of Pedregal de San Ángel, taking advantage of the volcanic nature of the place. The architects Antonio Attolini and Max Cetto, and the artista Mathias Goeritz and “Dr. Atl”; reason why the colony has a cultural and architectual value that is conjugated with the environment, being the “gardens” the characteristic element that Barragán retakes for the construction in these areas.

At present, the ridges within the Jardines del Pedregal colony still conserve relicts of xerophilous thickets of palo loco (Pittocaulon praecox), however in the last decades the use of exotic species, turfgrass and the lack of knowledge of the ecosystem have significantly damaged it. 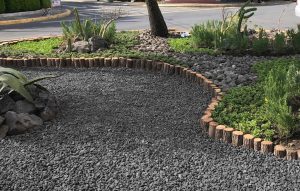 The importance of preserve the remnants that still remain and of restoring those that have been lost, lies in the ecological conformation of the place. Currently in the rocky beds, mainly, can be found among the vegetation introduced to accurate native species, which indicated the feasibility of carrying out a project to restore the habitat. 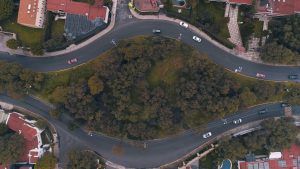 Our objetive has been focused on taking advantage of the existing basalt found in the ridges and returning part of the natural ecossystem to the Pedregal de San Ángel.

Due to its particular topographic conformation and the space proportion of approximately 5, 456.40 m2, it has great environmental richness, which induces to have varied microclimatic conditions that allow the endemic vegetation to be easily established whth little substrate. 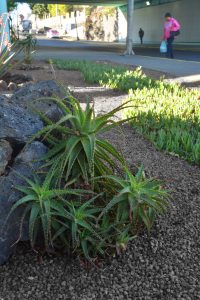 The master plan contemplates the implementation of native vegetation “xerojardines” in strategic points thaht are structured along the ridges located in “Av. Paseo del Pedregal” and “Boulevard de la Luz”. The creation of these stone gardens is intended to highlight the beauty of the scree, educate the environment and create an identity on the site. Some of these spaces are designades so that the user can travel them while others are focused on being scultural ponits that motorists contemplate from the road. 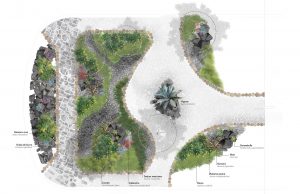 The second axis of the Master Plan is the preservation and conservation of areas little intervention, seeking care, proper maintenance and implementing measures to control and clean the vegetation. In addition to the creation of rainwater collection sites and filtrate it naturally to the subsoil, by means of runoff.

Finally, we place the creation of the “gardener’s guide” that will work to train personnel on the treatment of native species and cleaning of the volcanic rock. 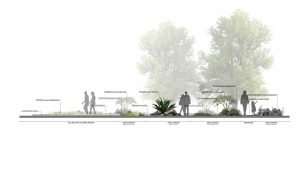 Finally, it is hoped that along the two ridges ecological corridors will be created as niches for the vegetation and fauna that still resides there.

These corridors will have a walker so that users can move between the ridges and contemplate the natural spaces.

As part of the actions to reach this objective, a reservoir of native flora of the scree is integrated that consists mainly of Echeveria gibbiflora, Bursera faragoides, Pittocaulon praecox, Sedum moranense, Agave salmiana, Opuntia lasiacantha and Muhlenbergia robusta; this vegetation is currently reproduced through cuttings or seeds with the intention of repopulating the areas with species that benefit the ecosystem. 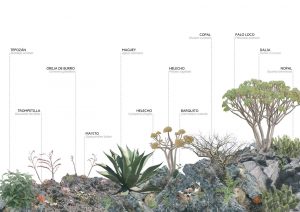 Elevation of species found at the ridge
Illustration: Itzayana Gervacio

In addition to doing the correct cleaning of the rock formations, it is sougth to highligth the volcanic formations in contrast to the color of the vegetation according to the time of the year.

Altogether, the material udes are mostly the volvanic stone of the site used as sculptures, trimmings, crushed stone, in addition trunks of the tres and gravels as the base of the garden or walkers.

The Project “Recovery of the Ridges in Jardines del Pedregal” seeks to create awareness of the need to implement measures and policies for the care of the natural natural redoubts that remain in the city, normally ignored or intervened with exotic vegetation, environmentally damaging the spaces and gradually losing their identity.