by: PLANT Architect Inc and Perkins Will Canada in joint ventur

Viljo Revell’s Toronto City Hall (1965) and its civic plaza, Nathan Phillips Square (NPS), are an integrated and iconic expression of Modernism. However, subjected to budget cuts, NPS was not constructed with the careful execution that characterizes City Hall, and much of its potential was left unrealized. Elevated walkways were truncated; gardens were only thinly conceived and thinly planted, and the west side of the square was never developed. 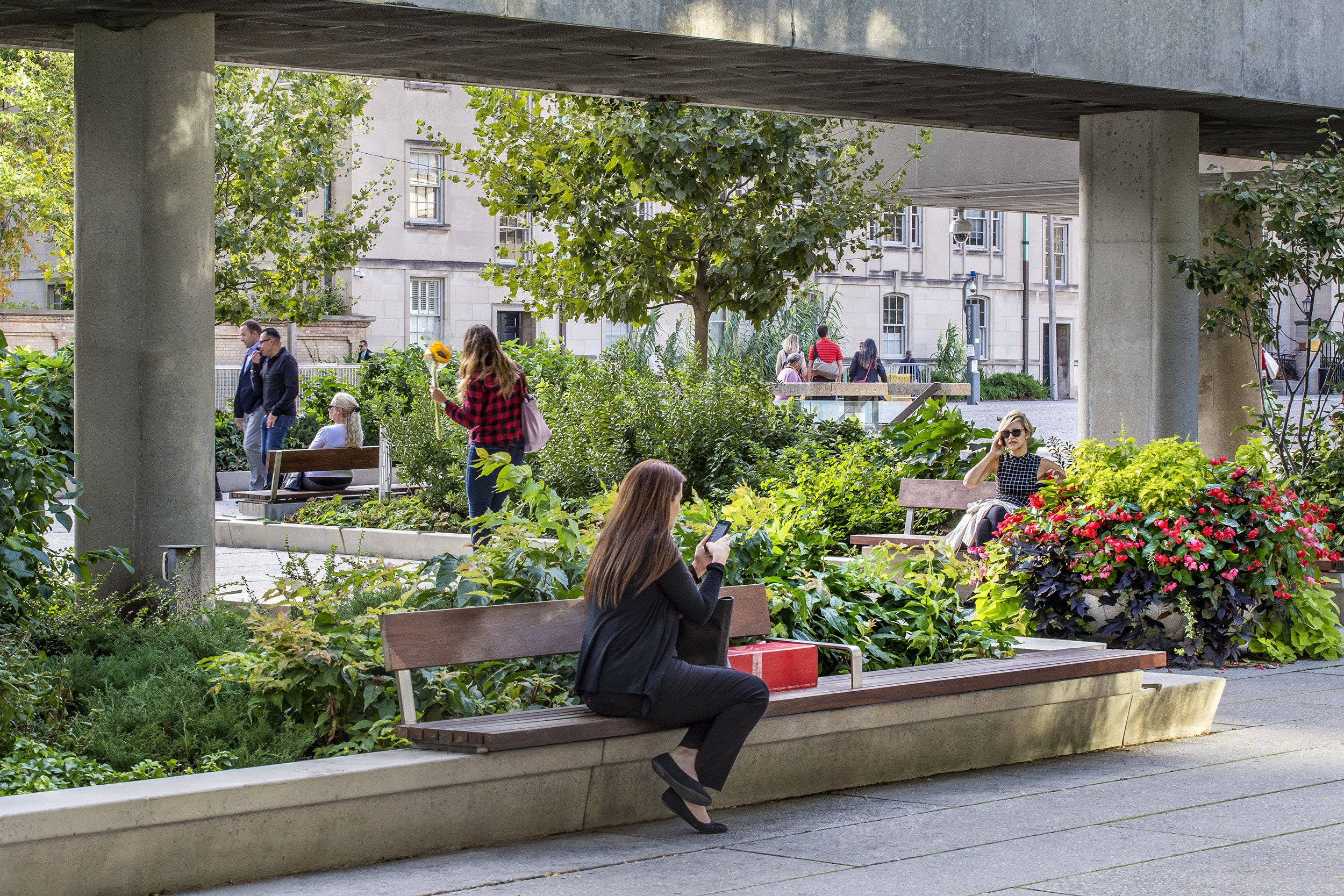 Along the south side of the square, the new Queen Street Forecourt adds greenery to what was formerly a hardscape plaza and provides seating areas that accommodate small groups
Photography: Steven Evans Photography

In 2006, the City of Toronto launched an international competition to redesign the square. The winning design, implemented in phases between 2010 and 2015, strategically rethinks NPS to transform it into an exemplary and accessible 21st-century public space.

Through the redesign or relocation of existing elements and a new series of buildings and gardens framing the open plaza, the Revitalization enhances NPS’s functionality, versatility, and appeal while augmenting this expansive heritage site’s “connectedness” to its surroundings.

The Square now faces outward to the city as well as inward to its central void: the landscaping and seating of a new forecourt along the Queen Street edge to the south creates an inviting threshold, and to the west, new ‘green rooms’ face toward a law courts complex. 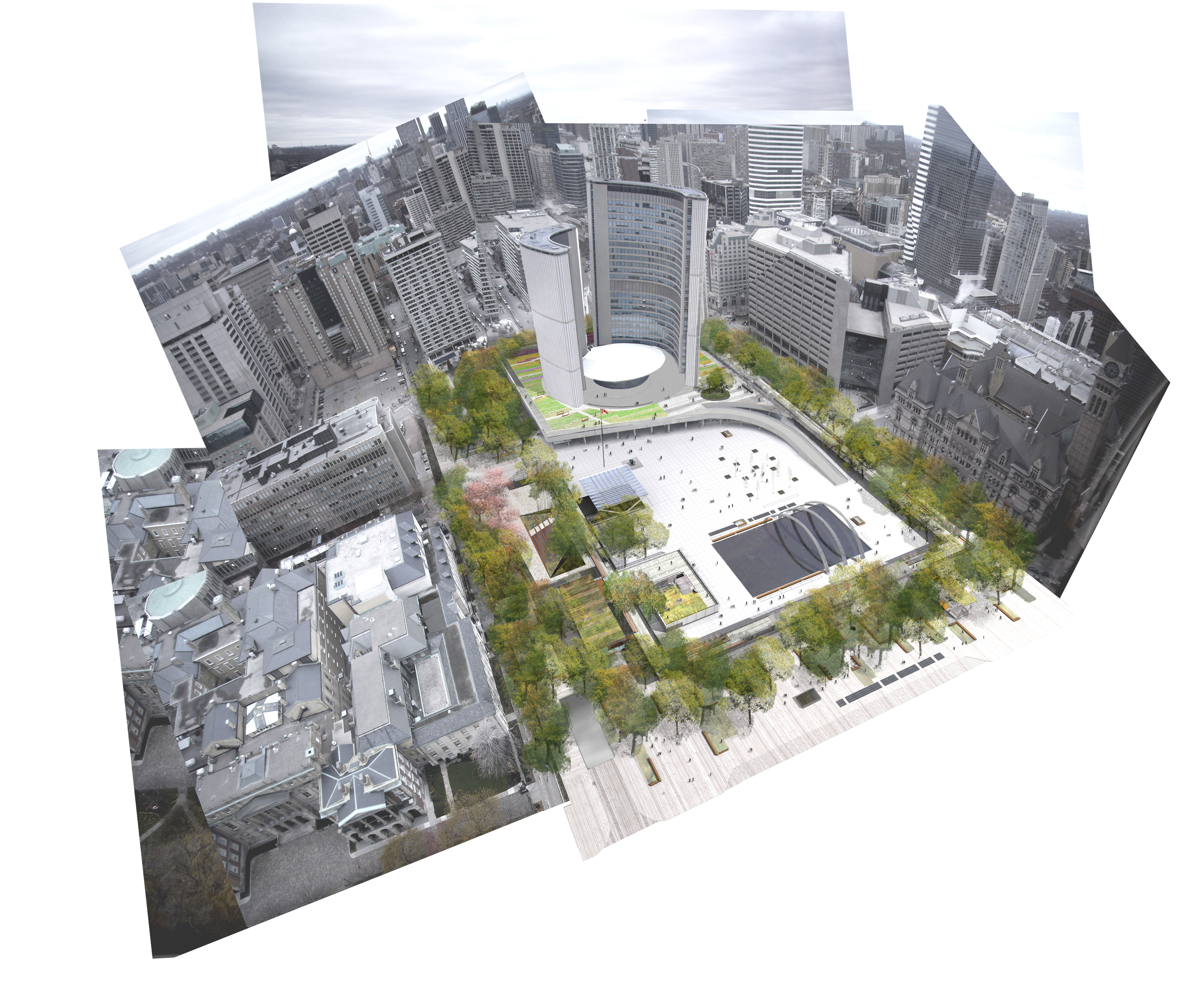 Aerial rendering of Nathan Phillips Square, showing the pool that is used in winter as a skating rink in the central foreground and Old City Hall in the foreground at the right
Render: PLANT Architect Inc.

To strengthen the coherence of the Square, the design team executed four tactical moves:

1. Open the Square – remove clutter at the centre (including a temporary stage and a Peace Garden that had been added in the 1980s) to accommodate all kinds of large gatherings.

2. Create programmed, porous, landscaped “green rooms” around the perimeter to frame the square and provide smaller gathering spaces for individuals and groups.

3. Create new connections between the existing raised walkway and the square, and activate these spaces that feed the programming of the square.

4. Strengthen links between levels and between zones using new architecture as the bridge to connect the two levels of the square. 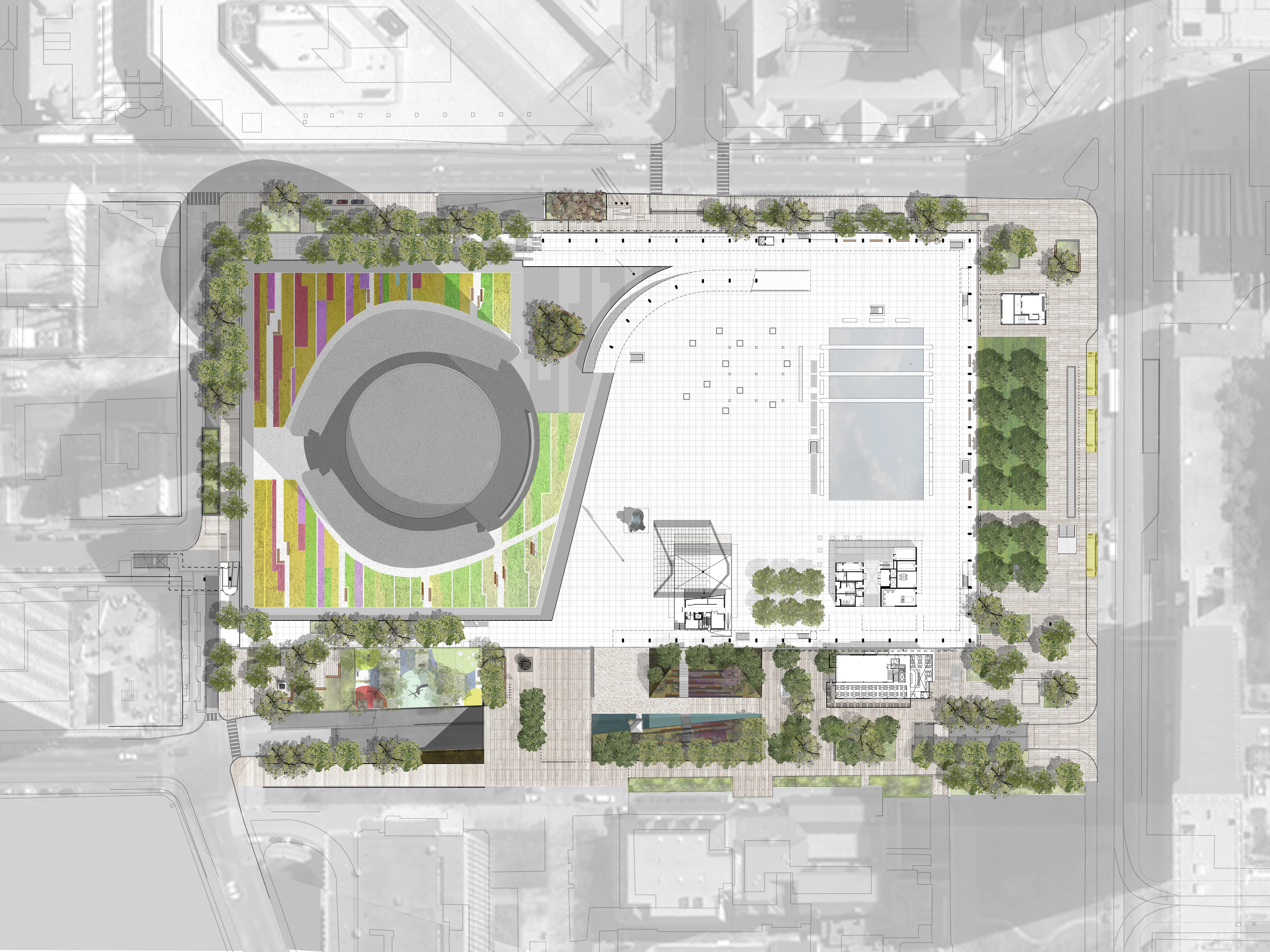 Major architectural components include the redesigned Skate Pavilion and a new permanent stage. All new structures are multi-purpose. When not in use for performances, the glass-canopied, terraced form of the stage provides covered public space and casual seating; its stairs connect the raised walkway to the square.

Prior to the revitalization, City Hall’s podium was a paved void that had long been closed off to the public. It is now Toronto’s largest publicly accessible green roof, a popular urban retreat for sitting and strolling.

The garden features a complex mosaic of sedum species inter-planted with grasses, alliums and bulbs that are well-suited to the shade and wind conditions generated by multiple high-rise towers in the vicinity. 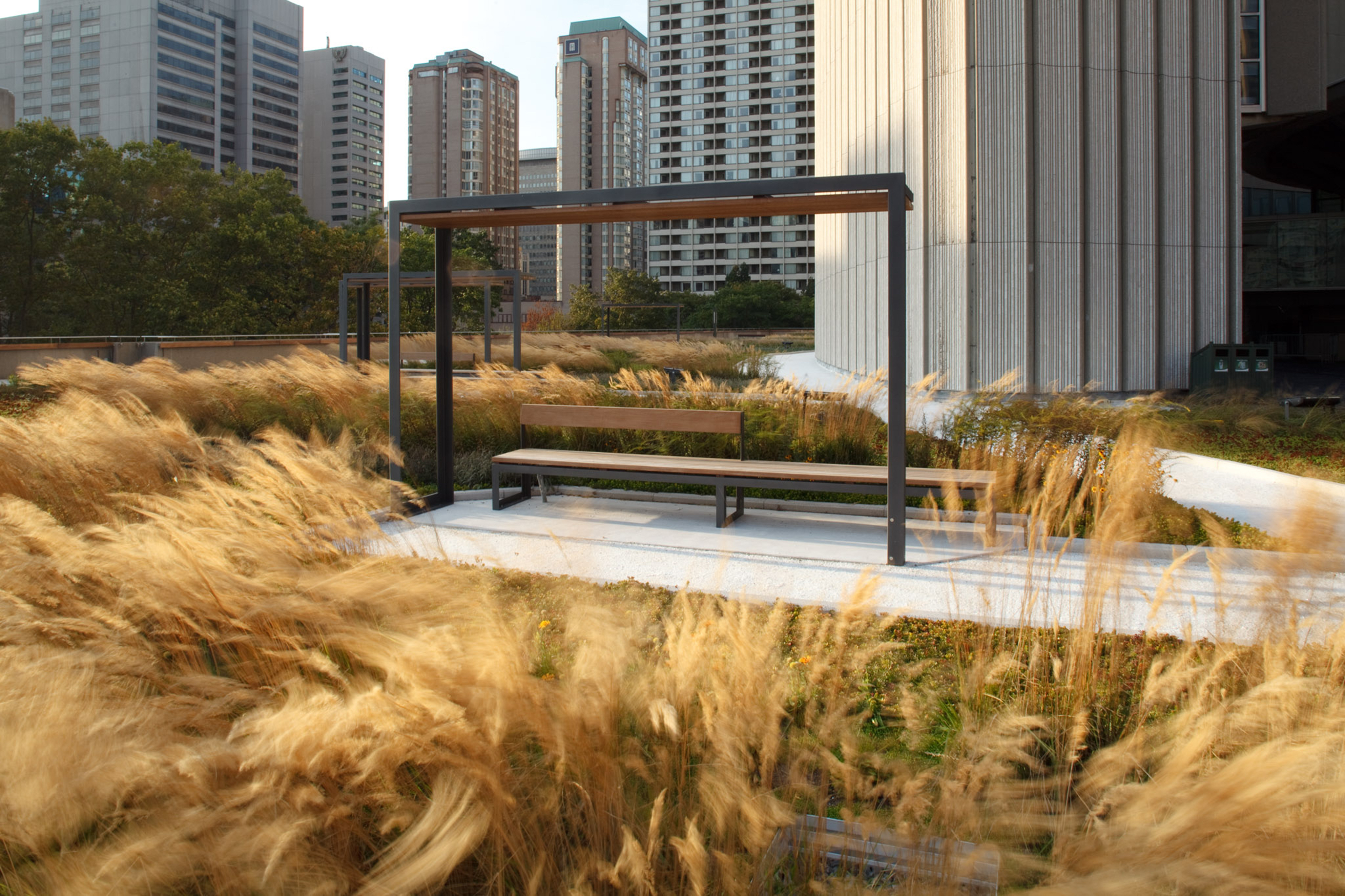 The Peace Garden added in 1983 near the centre of the square had compromised the space’s openness and ability to accommodate crowds. Relocating it to the western edge freed up the square’s centre for larger events.

The terraced seating of the redesigned Peace Garden is a major structure that conceals and acoustically tempers the underground parking garage’s exhaust duct.

The Peace Pavilion from NPS’s 1980s Peace Garden was restored and incorporated into the New Peace Garden, and its iconography – an eternal flame kindled in Hiroshima within a bronze cauldron of river water transported to Toronto from Nagasaki – was recreated. 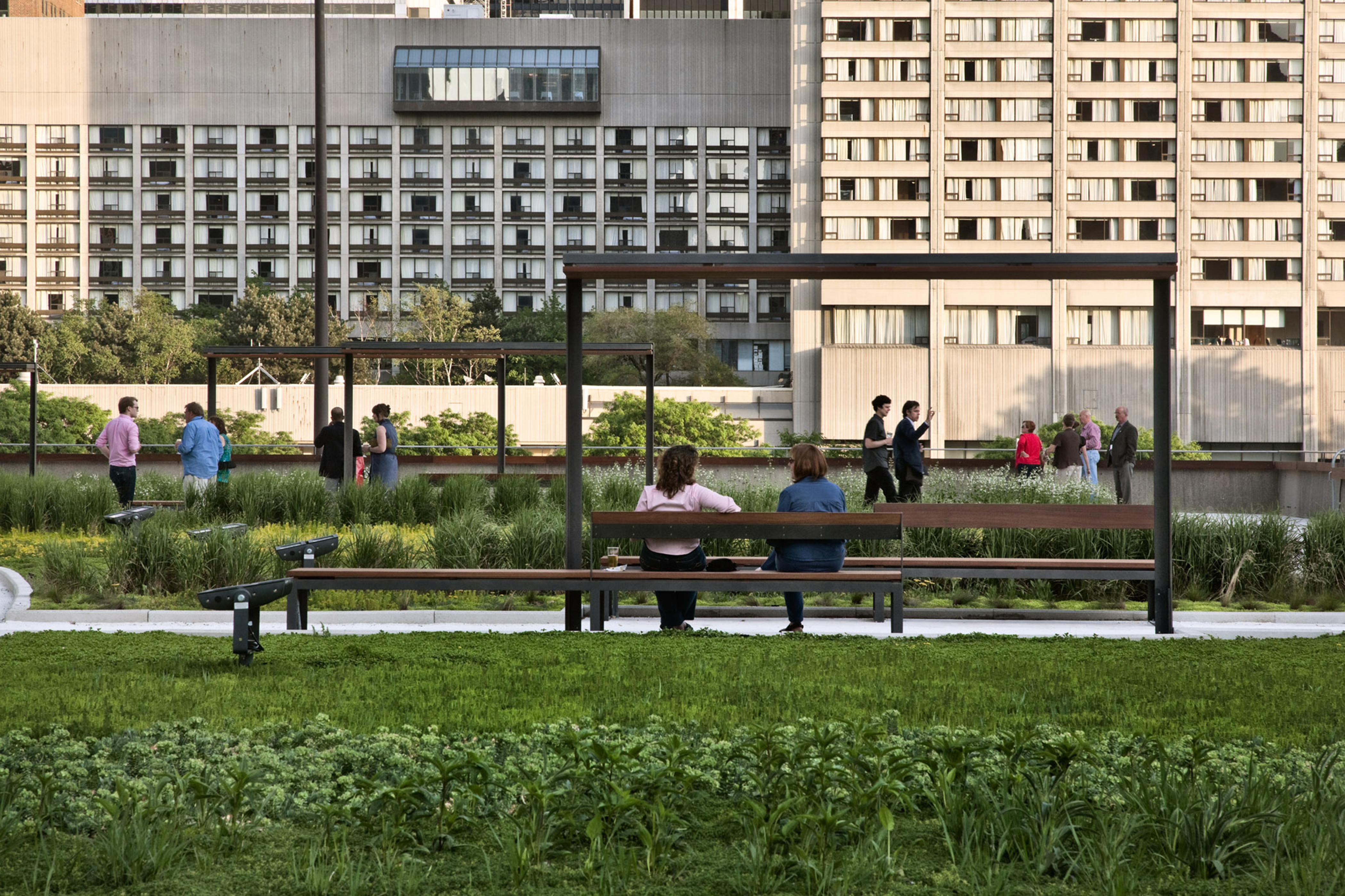 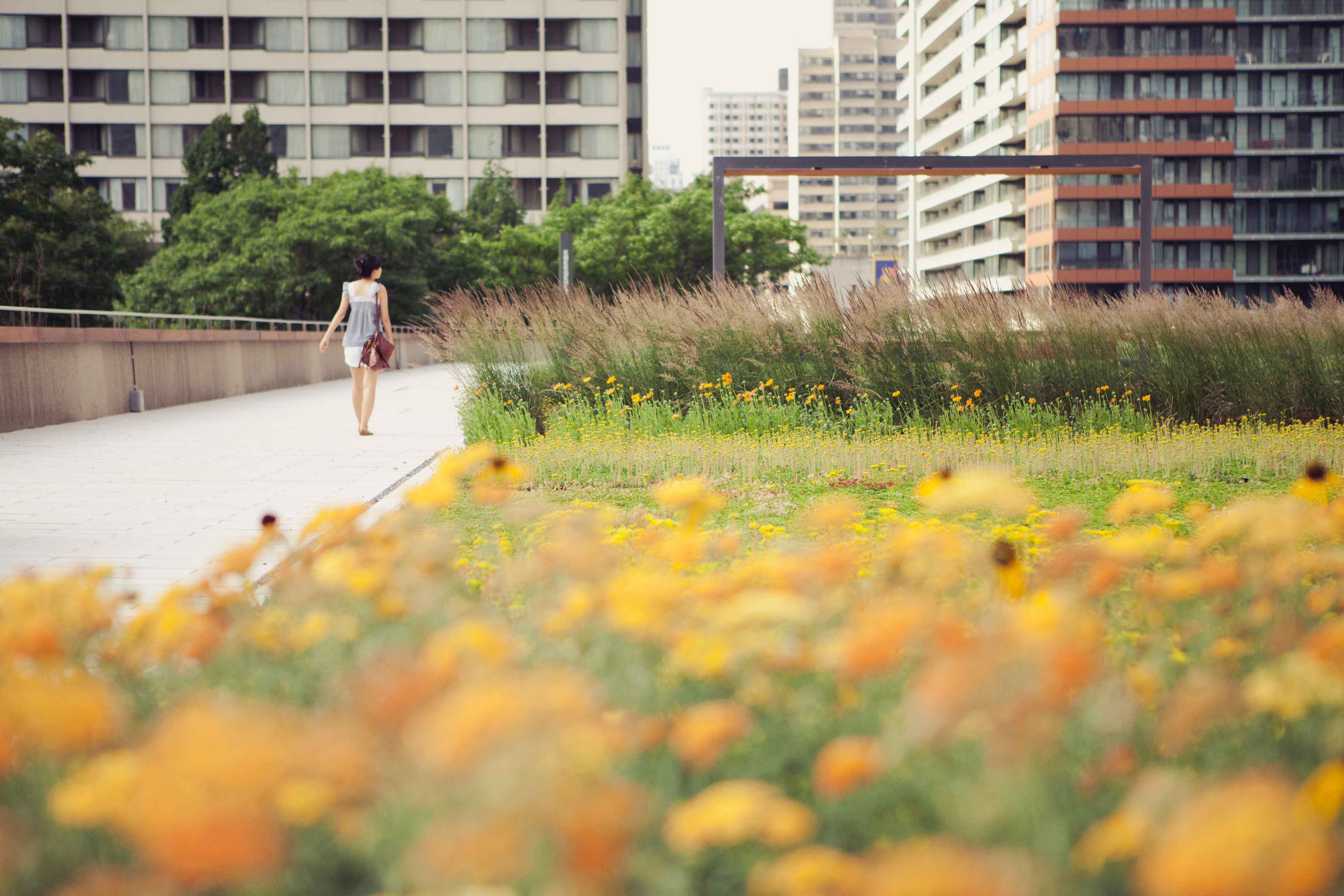 Plantings are predominantly native species. White-barked birches and the colour palette of the flowering plants reflect the theme of peace. Linear masses of plantings interwoven with seating and crushed granite paths reinforce the layered effect of the stepped planes – allowing those seated to be part of planting nooks within the larger whole.

The diverse collections of grasses, flowers and evergreen deciduous shrubs ensure year-round interest within the cascade of stairs. At the west, birches bracket the garden toward the Law Society of Upper Canada and the lane now closed to vehicular trafﬁc, creating a permeable screen. 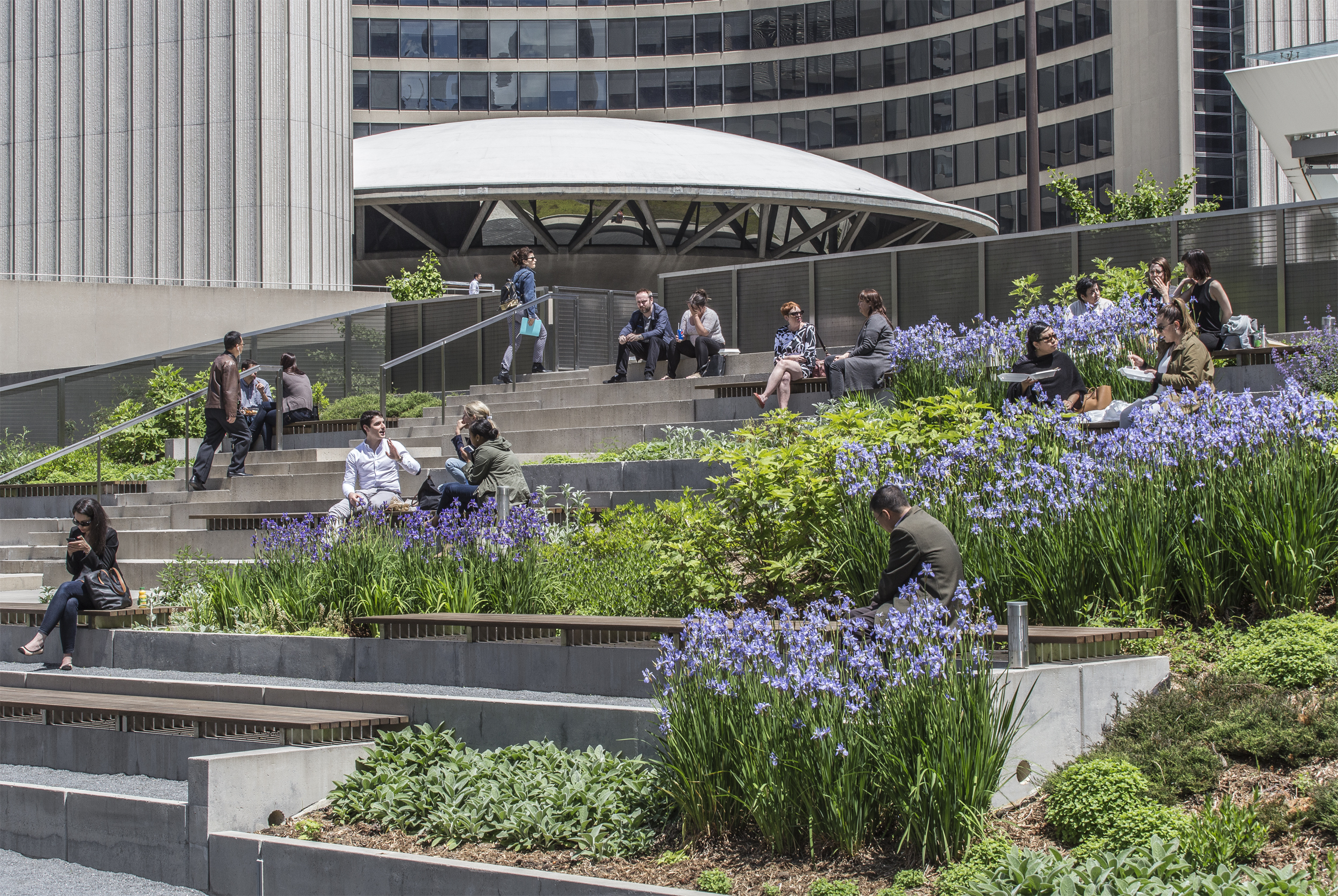 “Nathan Phillips Square is where Torontonians and visitors from around the world gather, share memories and come together to celebrate community and democracy. 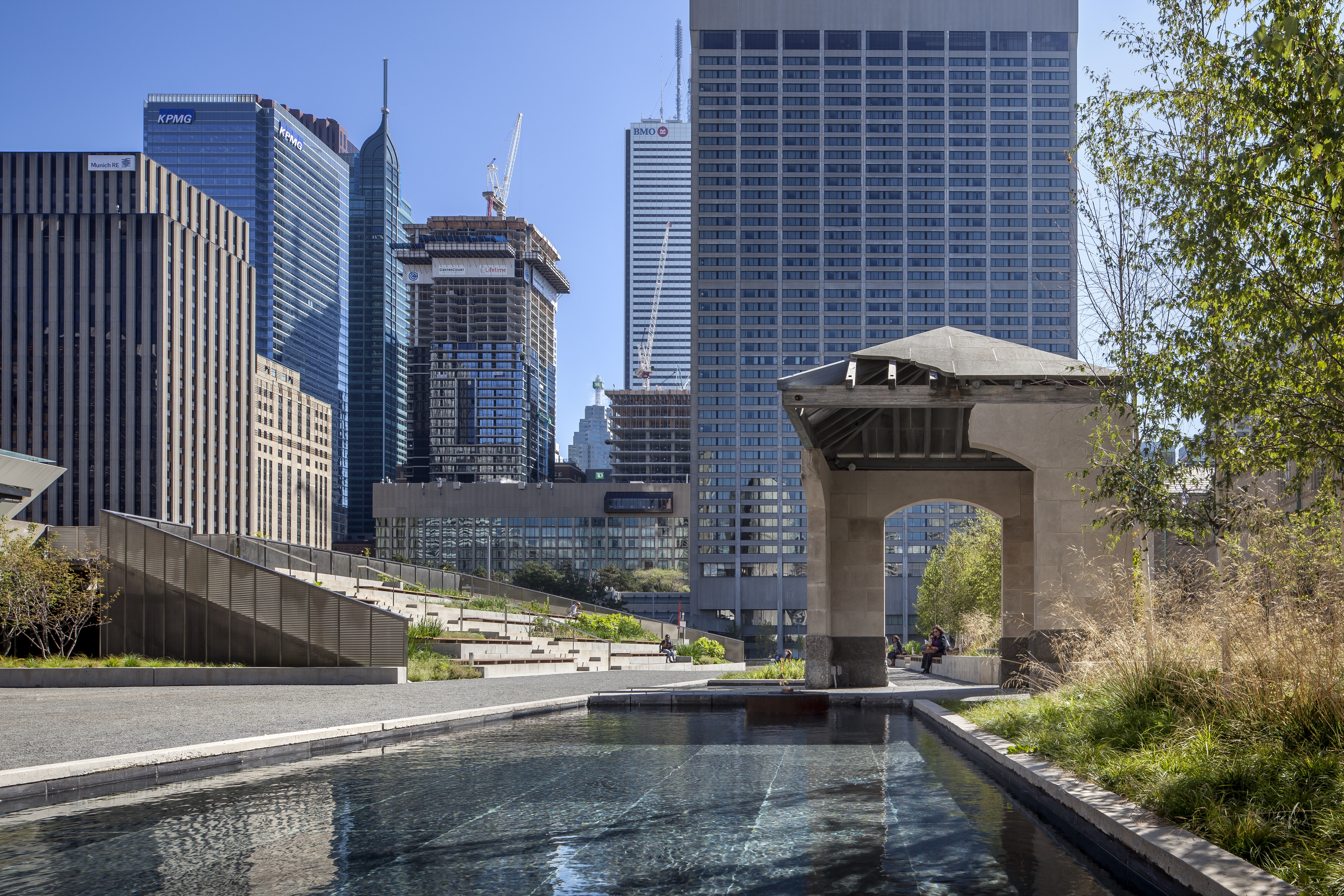 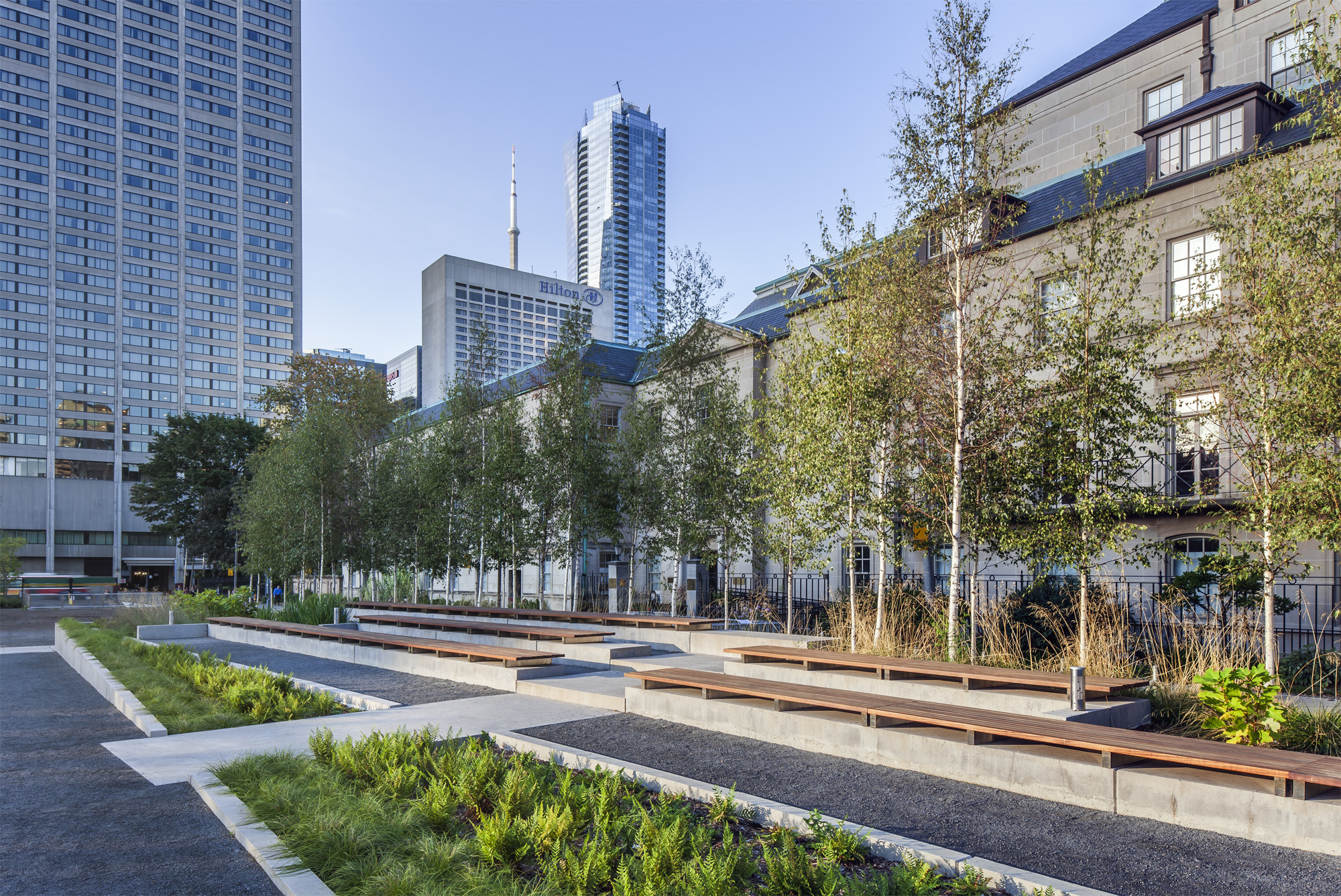 Birch trees line the west side of the Peace Garden, which faces toward the Law Courts
Photography: Steven Evans Photography