“A lagoon landscape as a sustainable development”, A Project by landscape architect Mario Lazo.

Mayakobá is an Integral Tourism Development of 700 ha: 400 ha in forest area and 300 ha in the plot with sea front. Located 40 km south of Cancun and 8 km north of Playa del Carmen.

The edge of Earth presents a strip of 30 km along a colony of Mangroves with variable widths (between 100 and 2,000 m), and in its seaside exists a sand strip or beach with a variable width (of 20 to 60 m).

Mayakobá has been the crucible of our doing in Unidad Diseño. To start the project, we visited the site, we intuit good possibilities for its development and it was evident the willingness of the company to fully respect the plan of land use.

The physical and sensory qualities of the different areas of the property, its topography, flora, fauna and hydrological conditions were the starting point of our first conceptual approaches.

“The luxury” of the development would be nature itself, as well as the challenge to preserve it, enrich it and promote environmental spaces for the creation of livable places.

The visits and experiences on the site with all its sensory qualities, beaches, skies, vegetation, sinkholes, wildlife, clouds, rain, shine, shadows, lights, materials, fragrances and textures made us clear that “The luxury” of the development would be nature itself, as well as the challenge to preserve it, enrich it and promote environmental spaces for the creation of livable places.

With the premise of making the environment the “luxury” of the development, the initial analysis showed the need to extend the environmental quality of the seaside, the pursuit of the tourism developers, to the entire plot

.Another important environmental constraint was to preserve the dune and the 80 ha of mangrove. 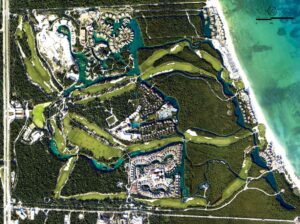 The proposed design scheme consisted in fully respecting the beach and coral reefs, preserving the dune and mangrove almost entirely, as well as creating a lagoon system that would serve as a connector between the diverse property areas.

The channels in the mangrove and the golf course table areas allowed to extend, in nearly seven kilometers, the environmental quality of the water front. With the authorization by SEMARNAT, the promoter company and us, had both signed an environmental commitment that would demand a new attitude for the realization of the construction works. 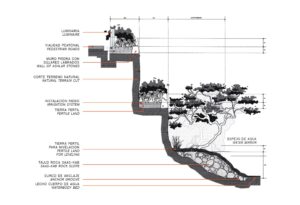 While environmental characterization studies showed us the areas and types of species, we had proposed ourselves the respect for important trees without having their pinpointing.

It was only at the beginning of the preliminary field woks that we obtained its exact location, which would result in adjustments to our executive drawings.

Similarly, vegetation and other physical factors of the terrain, such as caves, rocks, small springs, or even wildlife nesting sites, were a reason to adjust the layout and adapt the project to the nature of the site. 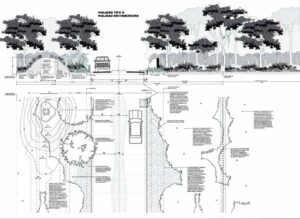 Previous studies of topography, geology and hydrology had shown us the ability to create, open, and sculpt a lagoon system that besides providing water bodies, so requested by the tour operators, would serve us to establish connectivity between the six hotels that would be built.

Similarly, such hydrological bodies allowed us to make possible the access to the beach through the mangrove, improving the ventilation and insolation conditions.

Ten years after its completion, it seems that the lagoon system has always been part of the site, since the exclusive use of endogenous vegetation offers a totally natural environment, where time, climatology and design have embraced.

The “Mayakobá” lagoon system allowed to give the same aesthetic and sensory quality to all hotels, as well it made possible the use of the 264 ha in an integral form and has led to a remarkable improvement in the development of the colony of mangroves, fauna and micro ecosystems. 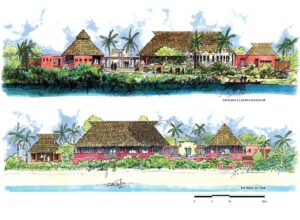 The “Mayakobá” lagoon system allowed to give the same aesthetic and sensory quality to all hotels, as well it made possible the use of the 264 ha in an integral form and has led to a remarkable improvement in the development of the colony of mangroves, fauna and micro ecosystems. 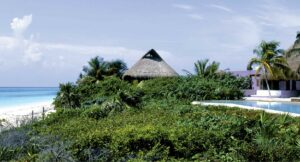 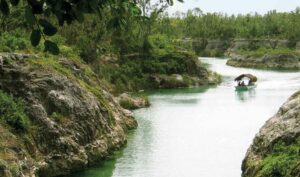 Water quality and its circulation are also preserved, thus conserving the natural drag of nutrients to the coastal coral reef in the Yucatan Channel.

These lagoons have become a rest station of a countless migratory birds, whose seasonal visit adds a variant of stimulating experiences. 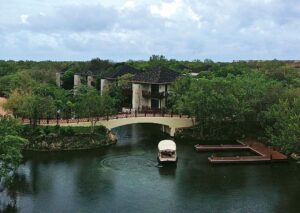