JARDÍN ERENBERG-COLL: The Sanctuary where forgotten plants are listened

JARDÍN ERENBERG-COLL: The Sanctuary where forgotten plants are listened

We visited John Patrick Ehrenberg, a retired medic who was chief of the Communicable Disease Unit of the Pan American Health Organization, which serves as the Regional Office for the Americas of the World Health Organization; and his wife, Perla Elisa Coll, a psychologist with a doctoral degree in public health.

After spending their lives traveling, studying and working in the United States, Europe and Africa, the couple arrived to Yucatan and fell in love with its landscapes, its food, its people, and its birds.

The couple felt it was the perfect place to raise their family, so they chose to stablish their home in Cholul due to its proximity to Merida, the capital city of Yucatan, and because of its beautiful quintas, country houses with lots of fruit trees, isolated from all city noise.

Once they had bought the land, they asked the contractor to only cut the trees that were growing in the area where the house would be built, but at night, when they came back, they found that the workers had deforested and burnt the entire extension of their property. Being nature and conservation enthusiasts, the couple were deeply saddened by what had happened. 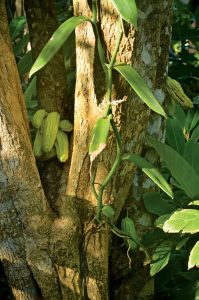 After this experience, and having realized that many plant species had practically disappeared from the Mayan region, like kanisté (Pouteria campechiana), chóoch (Pouteria glomerata) and “pepino kat” (Parmentiera aculeata), they decided to employ their old habit of collecting fruits and seeds from local plants to propagate them, developing a project to create an arboretum compound of Mayan fruit trees and a collection of endemic and exotic palms.

The first species they planted were of the citrus genus due to their great sunlight resistance. 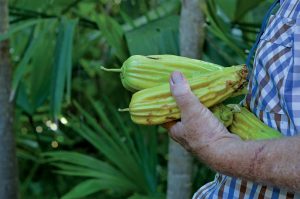 Subsequently, they planted more and more species, being diversity the key factor to avoid plagues, which have been absent during the whole garden’s life. “Certain cultural practices privilege some species and consign others to oblivion”, commented John while we were touring his beautiful gardens. “It is necessary to preserve the things that are at risk to be lost… some people seem to have a war against trees, they have stopped planting certain species because they shed their leaves”, he added.

During the tour we found plants that only our grandparents or great-grandparents remember, like bonete (Jacaratia mexicana), its population is at risk, and “pepino kat”, which in herbal medicine is very useful for treating urinary infection. 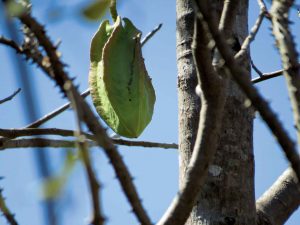 The application of vegetation friendly practices has created over time a great contrast between their property and their neighbors’, where the slash-and-burn agriculture method is still practiced.

“The secret of Yucatan is not leaving the soil without being planted, because high temperatures erode the soil vertically”, shared John, who asserts that his garden’s fertile soil has 40 cm depth, as a result of all the years they have been making compost.

Working in collaboration with Joel Ruiz, their chief gardener, they have created a place where to play with plants, installing artistic elements like the “Stairs to Heaven” made of bamboo, and a musical instrument made of the same material that dances with the wind, filling the place with its melody. 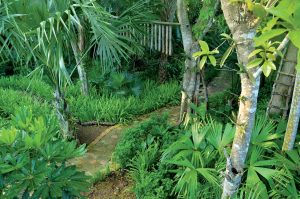 A musical instrument made of bamboo.
Photography: Molino Lab 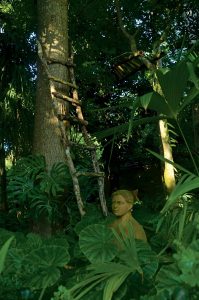 A statue that adorns the garden.
Photography: Molino Lab

The couple’s efforts haven’t stopped there. They have also established community development projects, inviting local women to participate, teaching them how to make compost for horticulture, to regenerate degraded soils, and to propagate ornamental palm species for sale, promoting at the same time the cultivation of those plant species that were left into oblivion.

Even local fauna has benefited from it. More than 150 bird species have been observed by groups of ornithologists that visit the place, like plain chachalacas (Ortalis vetula), which fill the afternoon with their noisy chatting. 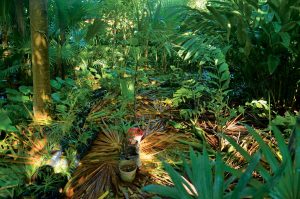 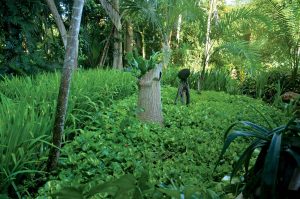 John and Perla are always looking for the ideal place for each plant, observing its changes and perceiving through their sight and touch how each species communicates their adaptation or dissatisfaction with their new place.

The couple’s garden is an example of how plants convey their needs and preferences if people pay attention to them; by keeping the mind open to experimentation and giving adequate attention and care, plant species can reach their maximum splendour, and a home garden can be turned into a sanctuary for species that were already considered disappeared. 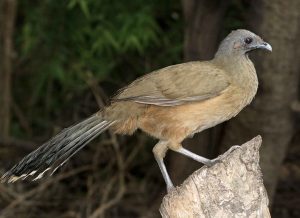 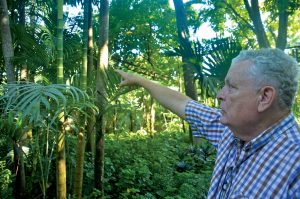 Looking for balance between vegetation and habitable space, merging both of them into a single harmonious landscape, this couple has transformed their home into a plant sanctuary, assuming the roles of respect-for-nature promoters and defenders of the balance carefully stablished over time.

The care, love and respect for plants are lived, shared and interwoven into the personal history of John, Perla and their family. 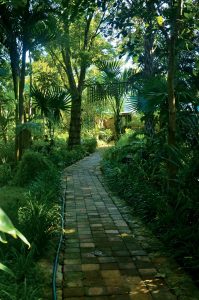