One of the first proprieties of the landscape that we can perceive is color; immediately,the geometric entities, textures, and shapes become predominant and integrate the process of appreciation of the matrix and then of the patches and corridors.

Let us remind that a landscape is composed mainly of three elements; the matrix, which is the predominant territory, the patches, those elements that are different in an island kind of way, and the corridors, that are the surfaces that link or can link patches.

“Color is the most constant, inevitable, and omnipresent companion you will ever have in life, from diapers to coffin. You cannot exist without color; all life, any animated or inanimate thing has it, whether you see it, or have or do not have awareness of it. Your waking hours are a parade of colors that you rarely perceive, because habits dull the senses.” 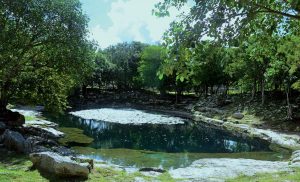 The predominant color of a landscape matrix is regulated by the type of material that covers a specific territory, whether is inert (for example, rocks) or living (vegetation).

Therefore, the vegetation that covers a great extension of territories has different colors and nuances along space and time. In an urban landscape, the presence of buildings and the materials that were used to build them, roadways and the entire infrastructure will determine certain nuances and colors.

In landscapes we can find the eternal clash of the opposites; the chaos in different elements against well-defined patterns. The patterns are also the fruit of human mind’s perception, the Gestalt effect, the reconstruction of the whole starting from the parts.

This is why, beyond order and disorder in nature, the human brain creates its classification of landscapes according to patterns of certain elements that can be considered useful or aesthetic; the landscape color can be found among these. 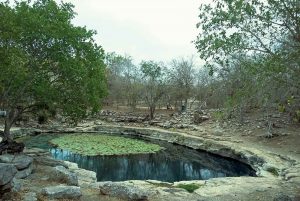 “In landscapes we can find the eternal clash of the opposites; the chaos in different elements against well-defined patterns.”

In addition to geometric shapes in the landscape, other elements like materials, textures and color can be perceived. All of this constitutes the landscape patterns that are in a simple way, according to Stevens (1974): spirals, meanders, branches, explosions. Two more elements should be added to Stevens’ list: fractals and colors.

Color or colors are created by the manifestation of an everyday process, seasonally and latitudinally, which is the property of the body that generates it, as a result of the reflection of solar radiation. This is known as albedo or reflectance towards outer space.

An absolutely white body reflects all solar radiation, and an absolutely black body absorbs it entirely. Within the spectra of colors, there are different degrees of reflectance. Such as described in the following chart, it can be appreciated that in snowy landscapes have an albedo between 75 and 95%, a dry plowed field has only from 5 to 25%, while an asphalted surface ranges from 17 to 27%. 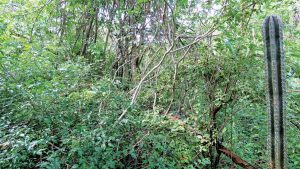 In a contrasting way, water, depending on the depth of the body that contains it might have an albedo from 3 to 10%. This is possible because water is transparent to light; therefore it absorbs it together with heat. Setting this paradox aside, it can be appreciated that the vegetal cover is placed in the middle of albedo, considering all vegetation types between 5 and 30%.

The previous can be observed in urban landscapes where the construction materials differ in their thermic and radiation proprieties (albedo), in consequence they also differ in their heating and cooling patterns. In this way, landscape vegetation becomes relevant due to its ability to buffer the quantity of light and heat that gets emitted through evapotranspiration, but to the exterior, reflecting a low proportion. 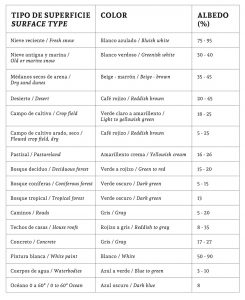 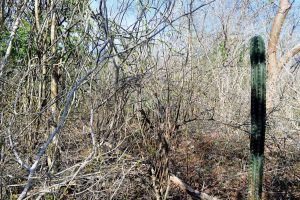 Phenology is the discipline that studies the seasons and annual cycles of biological systems, including the response of living beings to seasonal changes and, consequently, the changes that happen throughout the year, such as temperature, humidity, and the duration of light hours vs. darkness.

This is also expressed in the landscape through the color and that is how the changes of color of the landscape matrix are presented. The physiological changes of the vegetal cover, such as defoliation, flowering and fructification, that define landscape matrix, are reflected through showing color variation ranging from yellow to medium green and dark green, that later change to yellowish brown or reddish brown to gray. 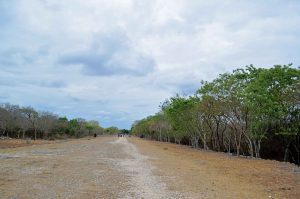 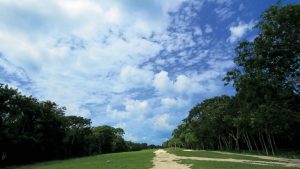 Landscape is appreciated as a resource through the identification of usable goods; the green color, reflection of photosynthetic plant activity that are perceived by population as environmental services: of support or help, provisioning, regulating, and cultural (scenic beauty, recreation, cultural and artistic information, spiritual and historical information, science and education).

From the latter, the landscape color and contrasts also have that ludic component. Thus, we can assume that the tones and colors of landscape also reflect the intensity of the environmental services that they provide to the territory itself. Let us see other examples.

Archeological zone in Xcambo, Yucatan. Two matrices of different densities and tones of green can be appreciated, as matrices that surround the archeological site as a patch.
Photography: Daniel Pastrana Espinosa 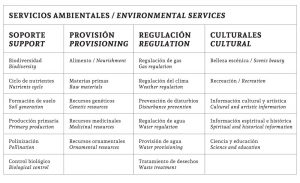 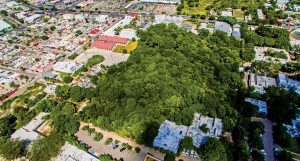 Aerial view of the Regional Botanical Garden of the Center for Scientific Research in Yucatán. Located in the middle of a white-gray matrix, but does regulation services, absorbing the CO 2, and emitting oxygen, regulating the microclimate and all the cultural services.
Photography: Daniel Pastrana Espinosa

We have presented only a few examples of the colors’ importance, especially green, in the landscape. In other latitudes, even in other regions of Mexico, landscape colors and tones are expressed in a different manner. 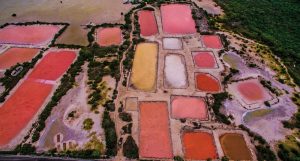 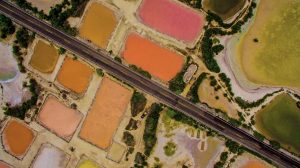 Features of a landscape in the zone of Xcambo, Yucatan with rustic ponds for obtaining salt. The first photography does not present a defined color pattern, while in the down left photograph the matrix is yellow corresponding to a flooded savanna. The pink color corresponds to a great concentration of the crustaceous Artemia salina and the greenish to different kinds of microalgae and cyanobacterias.
Photography: Daniel Pastrana Espinosa 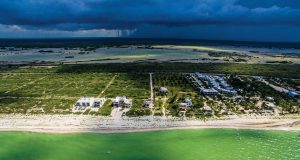 The bicolor landscape of the coast of Xtampu, Yucatan.
Photography: Daniel
Pastrana Espinosa

In the face of global warming, it is imperative to develop sustainable urban landscapes. It has been estimated that urbanization (paved surfaces, buildings, streets) modifies local climates by increasing both minimum and maximum temperatures while, on the contrary, trees can reduce local temperatures up to 5°C 2.

Besides contributing to mitigate the global warming and giving environmental services, vegetal cover is appreciated in cities for its shapes and colors that are manifested in its phenological stages (flowering and fructification). The appreciation and valuing of colors in the landscape, besides being a cultural process, must be an educational process based on the understanding of landscape elements and its role in nature. 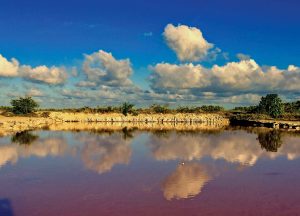 Mexico, as many other Latin-American countries, is a mosaic of cultures filled with colors, it is enough to observe the typical clothing of the different regions to conclude that it is a fundamental part of everyday life, and a characteristic that permeates to architecture, and of course, the ephemeral landscape in dances, stages, and decoration, such as the elements that cover the holidays both of the living and the dead. 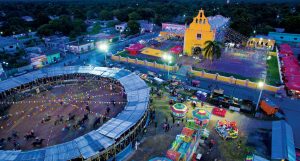 To walk around the colorful streets of the historic center of Campeche, Oaxaca or San Cristobal de las Casas is enough to realize that chromatic variety indulges the senses; it can be noted how this singularity has been diluted with the passing of time in urban areas, where new developments seem to overlook this characteristic, which is more noticeable in the zones of medium and high income, because among rural houses or urban low-income housing, the diversity of shapes and colors are constant elements of landscape, manifesting not only in its built elements but also in the variety of ornamental and edible flora, so the color becomes a manifestation of the living culture. 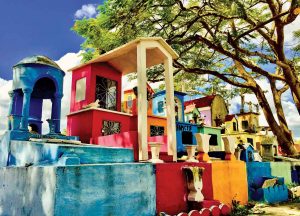