The project is proposed for the municipality of Monterrey, Nuevo León, Mexico. The neighborhood El Realito is a community where inhabitants settled down by land invasion more than fifty years ago.

Over the years, neighbors themselves have worked to urbanize the area and regularize their properties in order to include the neighborhood within the formal urban context. 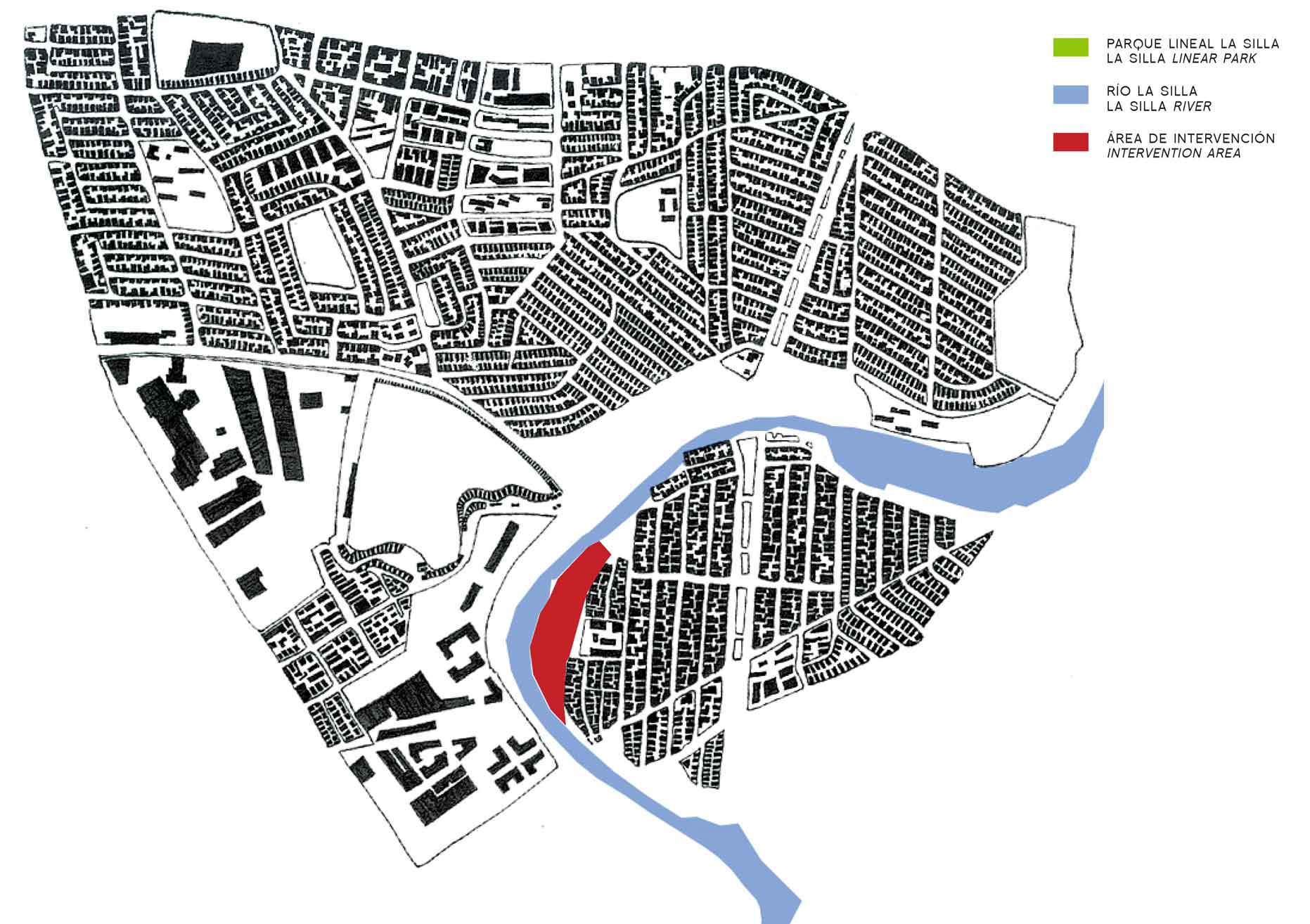 However, it remains a neighborhood with strong marginalization characteristics in which there is a perceived lack of quality public spaces, as well as high risk of flooding during hurricanes.

Luis Fernández del Campo Audelo is a Mexican student of the 10th semester of Architecture ITESM Monterrey campus, his interests are Urban Design, Bioclimatic Architecture, and Landscaping. 3rd place winner of the CEMEX-TEC Social Project 2015 and finalist of the CMR Contest 2014. 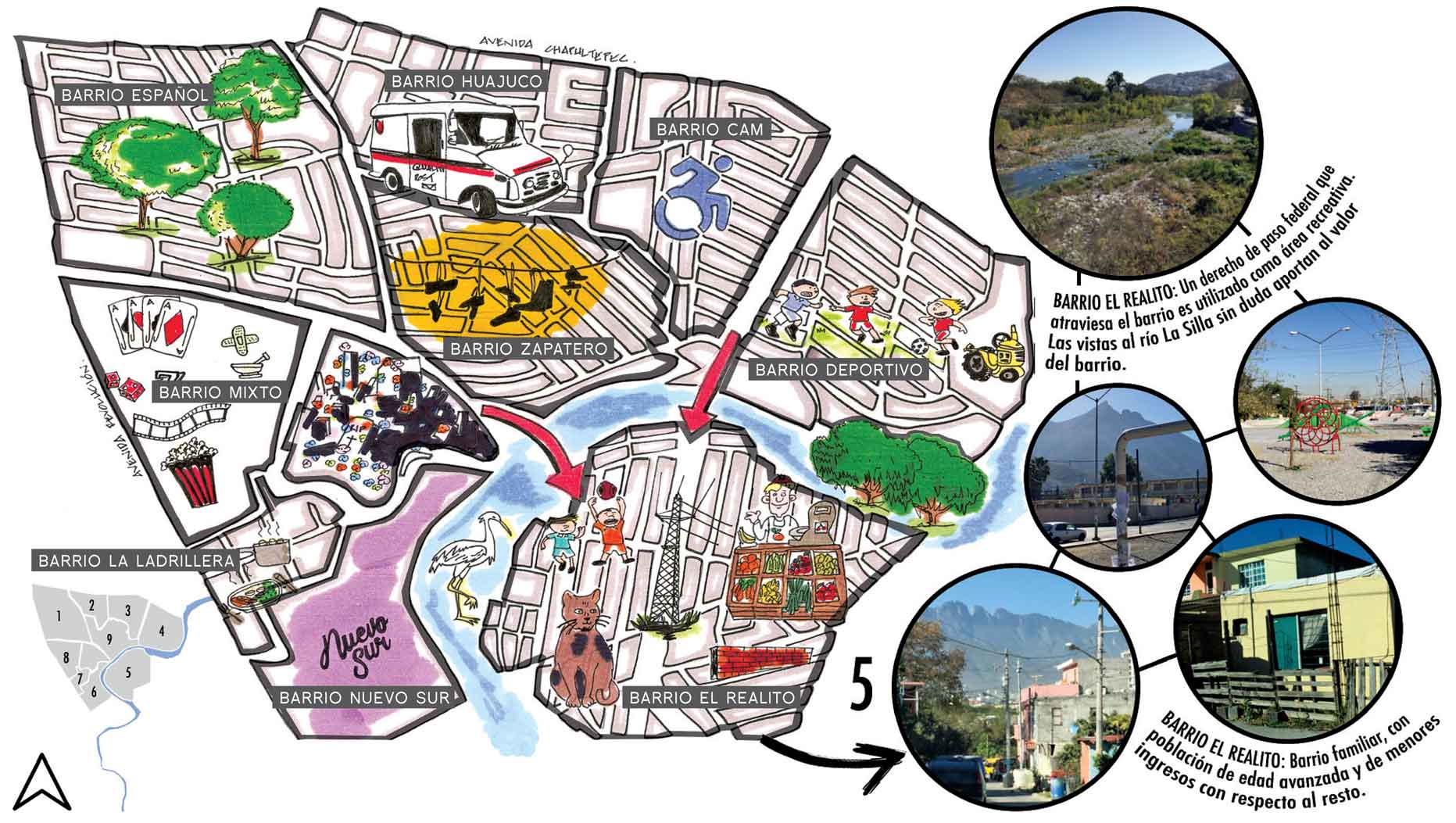 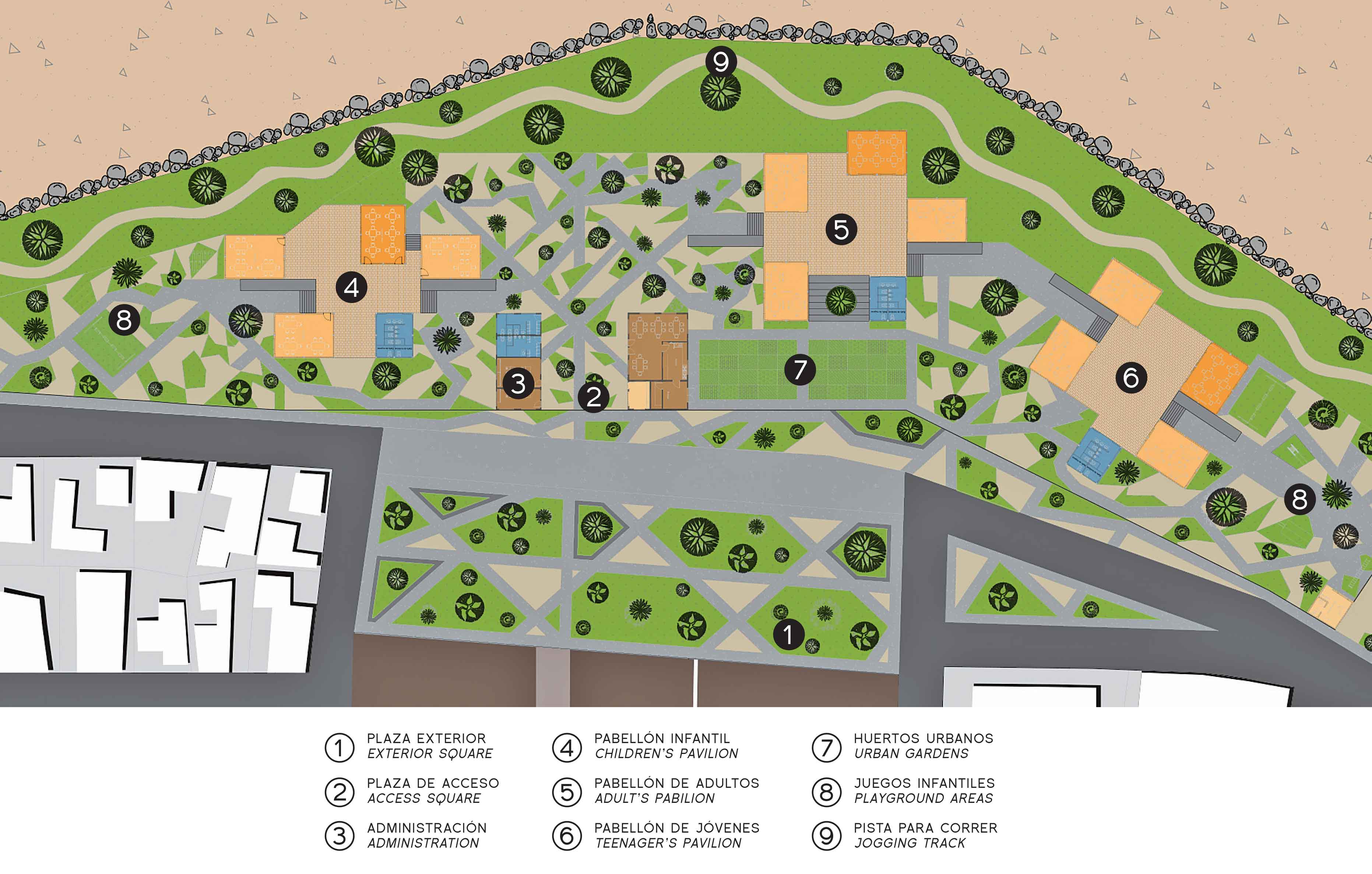 This project seeks to rescue the public space that separates the colony from the river in order to regenerate it and create a recreational area for the colony’s senior adults population.

The proposal creates a connection between primary school Dr. Eduardo Aguirre Pequeño which is located between Jesús Urdiales and Arboleda streets with La Silla River, through an outer plaza, which is designed based on a strategic grid which serves to link the different facilities that exist around.

To improve the quality of the services to which the inhabitants of the area have access, it is proposed to create an urban park where they can engage in different recreational activities such as: exercising, cultivating urban gardens, practicing sports, etc.  To achieve this goal, the project includes a peripheral running path, three sports courts and two recreational playground areas. 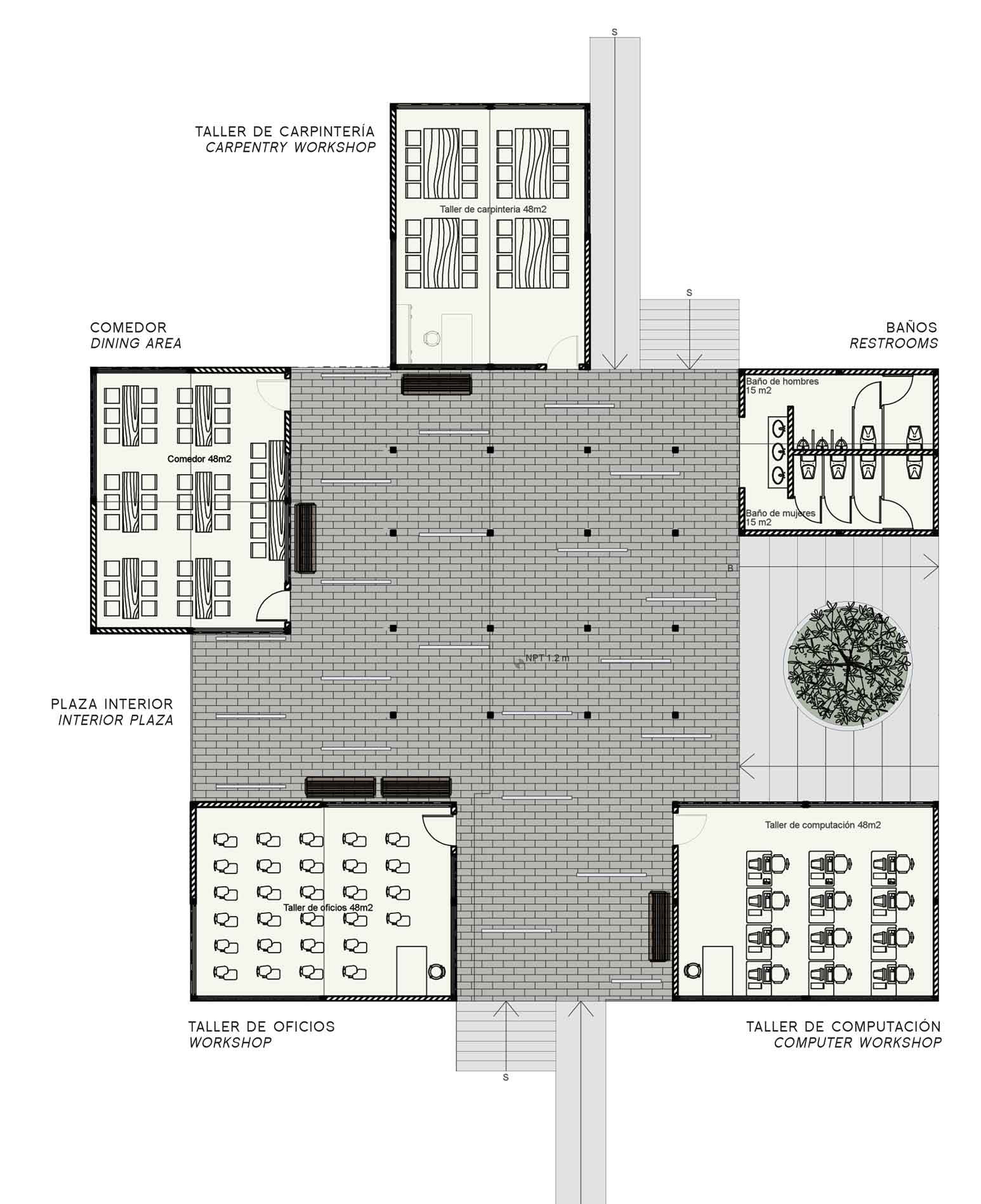 Within the same project, it is proposed to create a community center that follows the standards of SEDESOL (acronym for the Mexico’s Ministry of Social Development).

It consists of a building distributed around a central plaza interconnected by three pavilions (for children, adults and teenagers respectively) that contain five modules each, which at the same time play  different functions: a dining room module, a bathroom module, and and three multipurpose modules.

These modules are interconnected by internal squares, which at the same are united to the central square, designed using a planned grid around the outer square as a starting point but with more organic alterations, allowing it to function as a transition between the river’s natural environment and houses in the surroundings.

Finally, it should be emphasized that all designs follow the the optimal accessibility and security standards of the urban space. 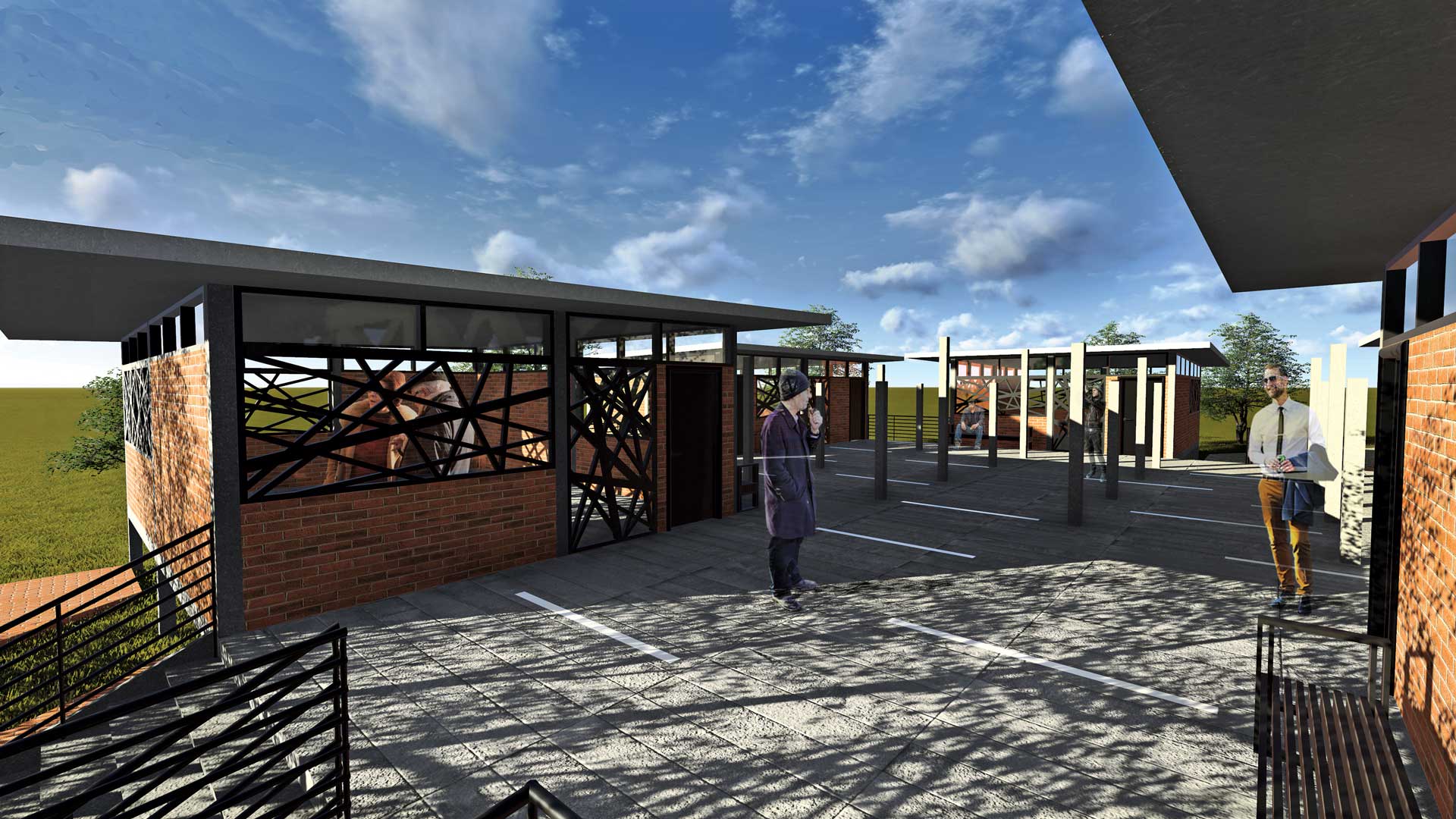 The project allows recovering a public space and generates an “ecological lung”.