Landscape architect Gustafson Porter + Bowman has completed the first phase of Parque Central, a new 11.5ha urban park formerly occupied by railway lines and industrial land in the centre of the city of Valencia.

The first phase of Parque Central provides a new focal green space for a range of age groups and community uses and is characterised with areas for art, activities, and community events that refer to three quintessential characteristics of the Spanish city: water, food, and the Mediterranean landscape. 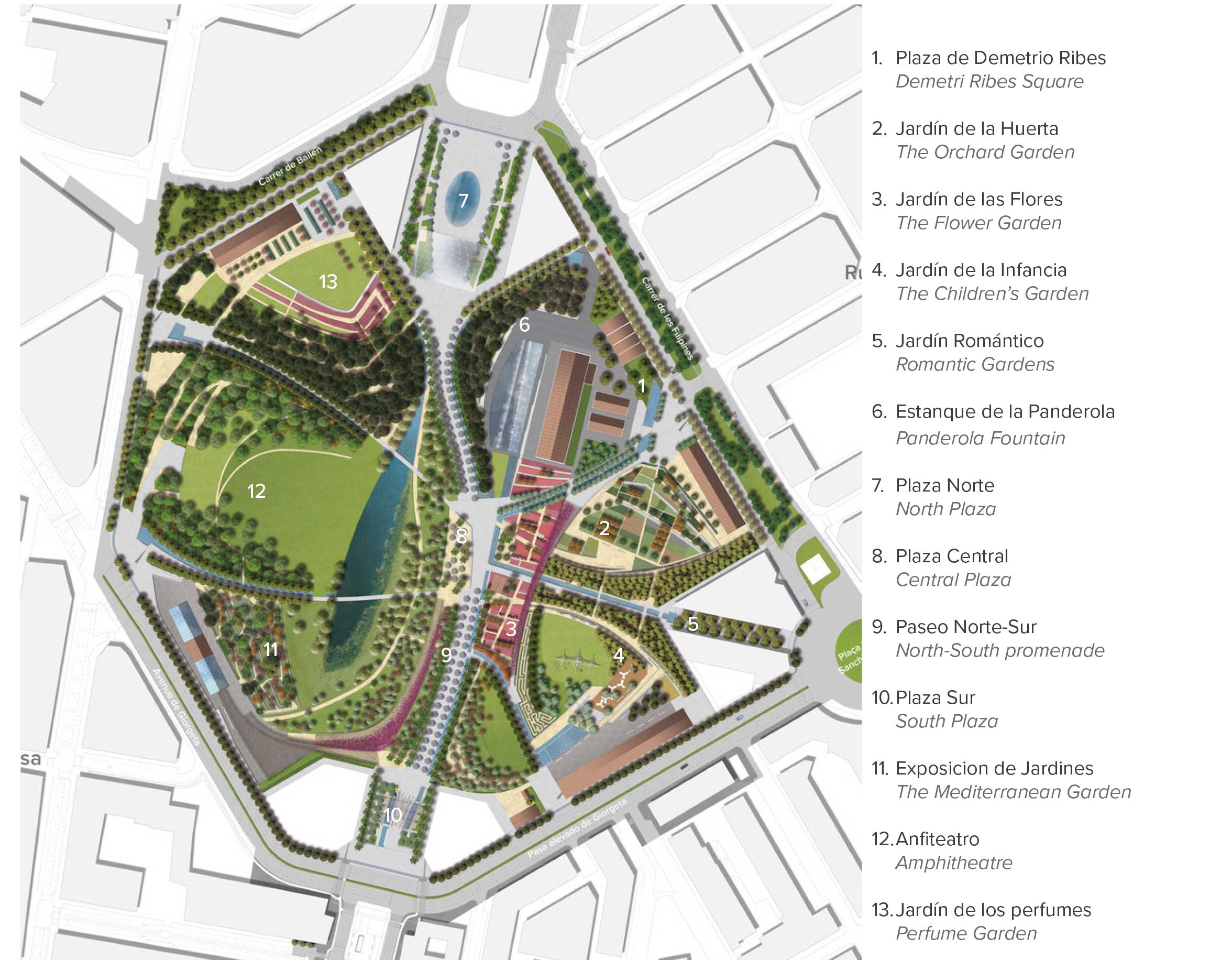 The new park consists of a series of varied, multi-level gardens that have been created as a series of large ‘bowls’ – inspired by the region’s traditional ceramics – manifesting itself as concave depressions in the natural landscape that are created through sculpted landforms. They define the six areas of the park and attract visitors to the heart of the park where a former agricultural building (Alquería) has been renovated to serve as the offices for the park. There is the Children’s Garden, the Romantic Garden, the Flower Garden, the Orchard Garden and the Demetrio Ribes Arts Plaza. 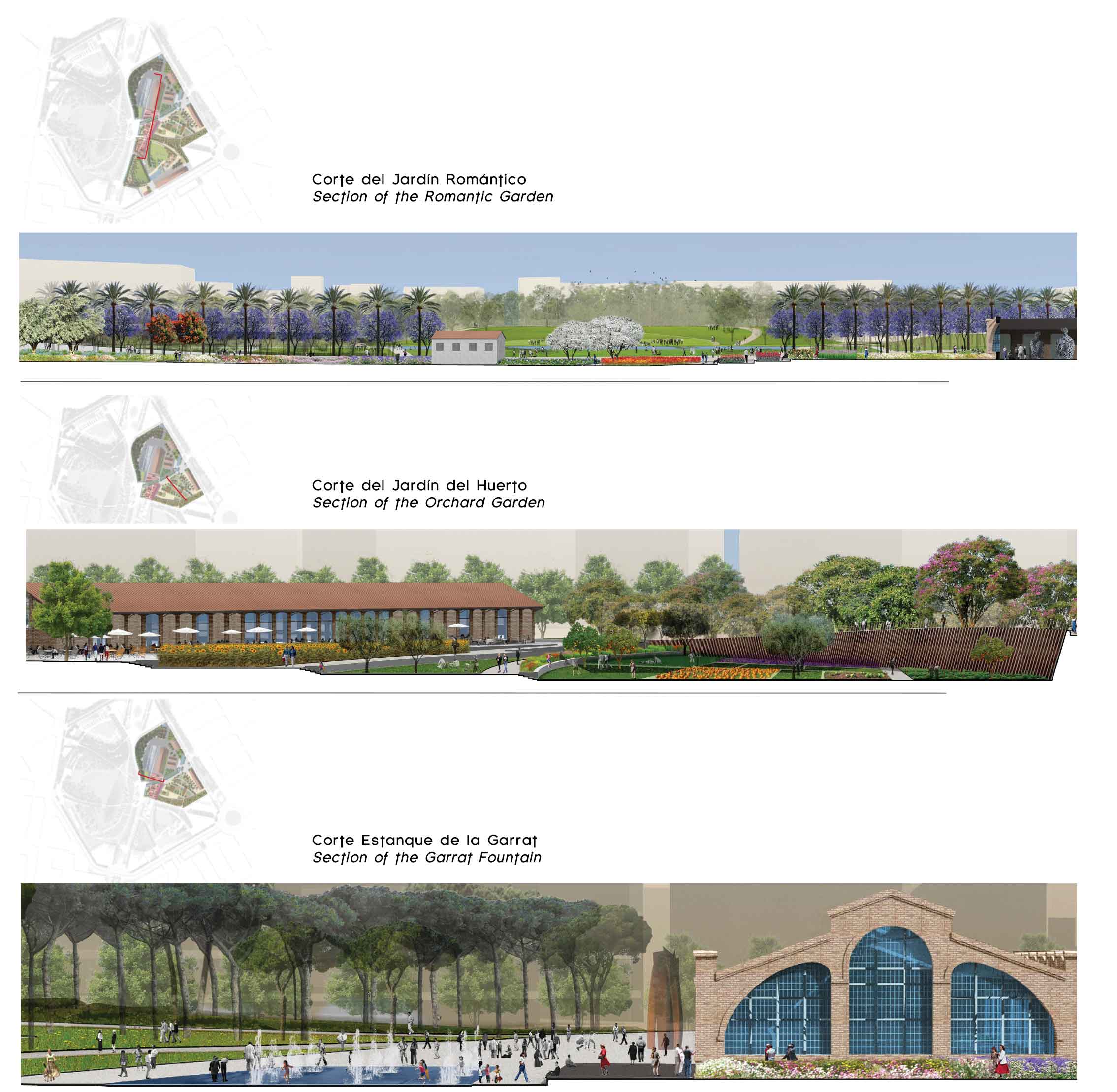 Mary Bowman, Partner at Gustafson Porter + Bowman said: “We feel proud of what we have achieved with the first phase of Parque Central. Valencia is a Spanish city and a Mediterranean city like no other, with a rich history of agriculture, horticulture, aquaculture, not to mention its trade history and history of artisanal and artistic pursuits. I believe we have been successful in capturing the unique qualities of Valencia, delivering a park that is evocative, stimulating, and full of  unexpected sensory experiences.”

The landscape design of Parque Central acknowledges Valencia’s unique position as a major trading and cultural centre in European history and its location between a number of ecological habitats. 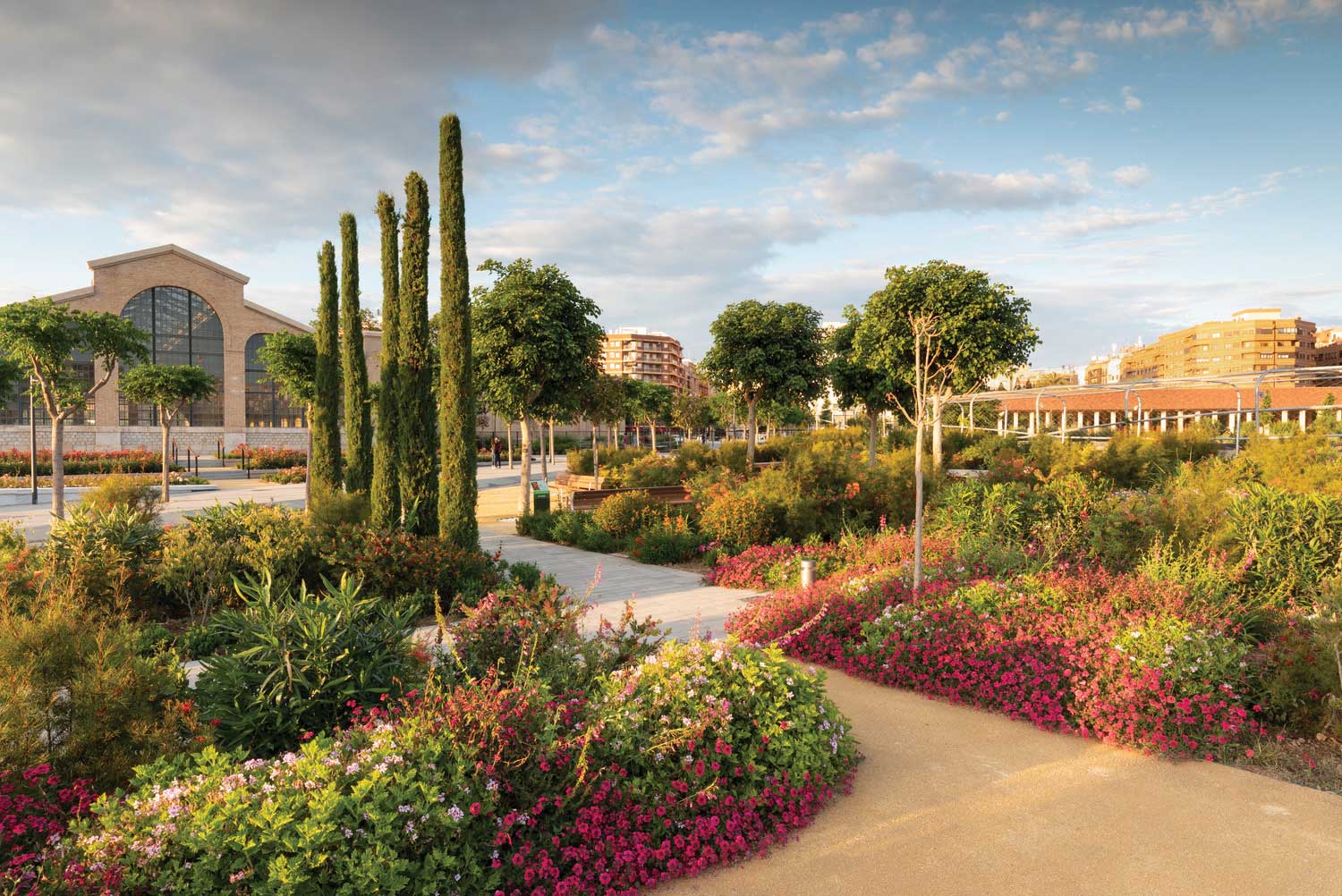 Gustafson Porter + Bowman used a range of materials including marble, granite, and Calatorao limestone typical of Valencia. The colourful and sensual planting palette draws on the flora and fauna of the region, becoming a vital new ecological component and public space within the city.

The vegetation strategy is based on the general concept of creating zones that represent the natural and cultural landscapes of the region. The park includes 1000 trees, 85,000 bushes and 70 herb species which are all native to the area or are varieties of native plants or non-invasive plants adapted to the Mediterranean climate.

The different types of vegetation (trees, shrubs, carpets, flowers) characterize each bowl and provide a unique character and appearance. 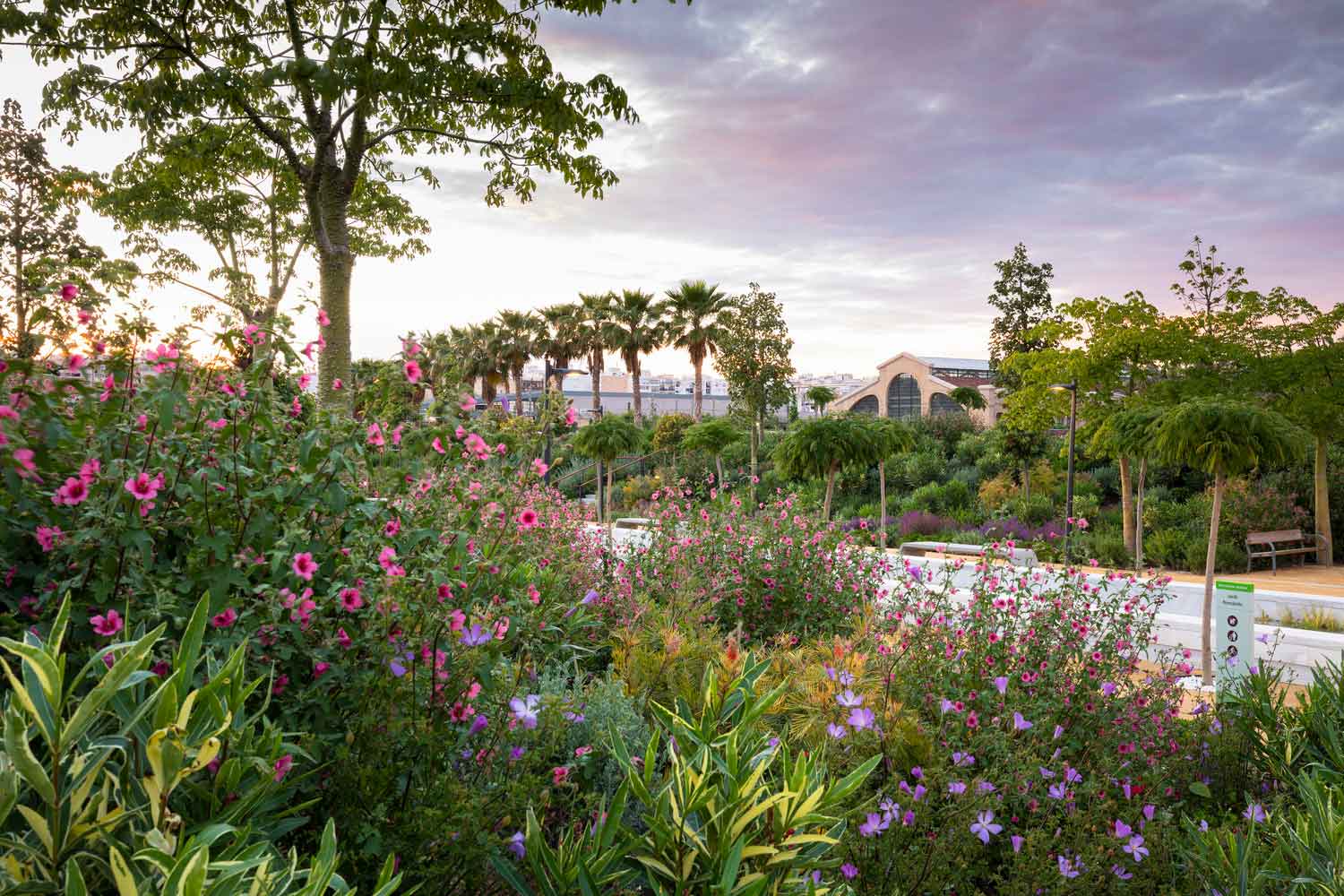 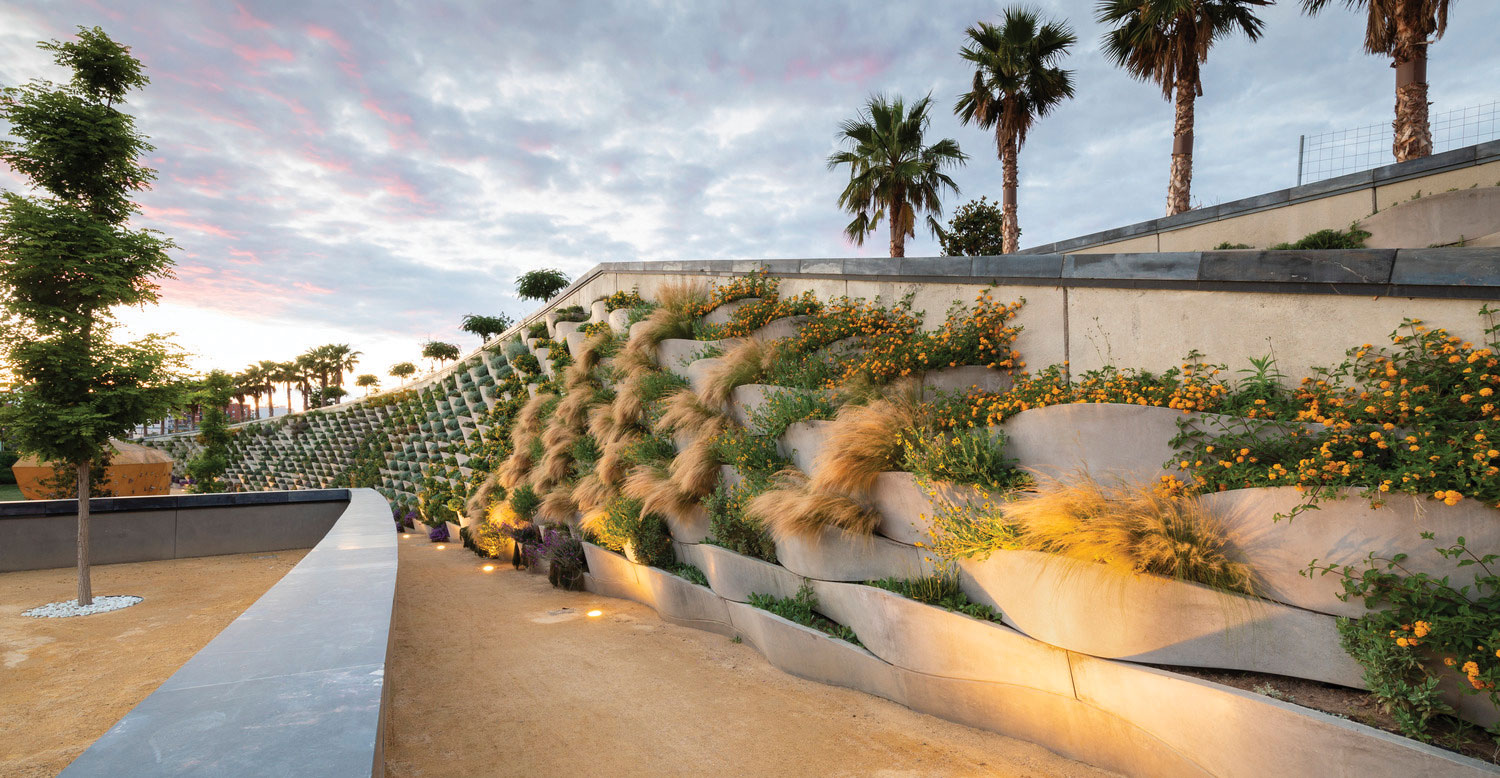 Inspired by the poem by Valencian writer Ausiàs March, ‘Aigua plena de seny’, (water full of wisdom), water is one of the main design elements in Parque Central. It is both a structural and restorative element that refers to the different ways in which water appears in the natural landscape of the region: the sea, the  freshwater lagoon of the Albufera, and river Turia. At each entrance of the park visitors are greeted by a unique water feature that filters into a canal that leads them inwards, as part of the scheme’s navigational strategy.

Parque Central also debuts a progressive sustainable drainage strategy, whereby the series of landformed bowls discreetly collect rainwater which drains into a buried centralised reservoir that treats and recycles water back to the city. 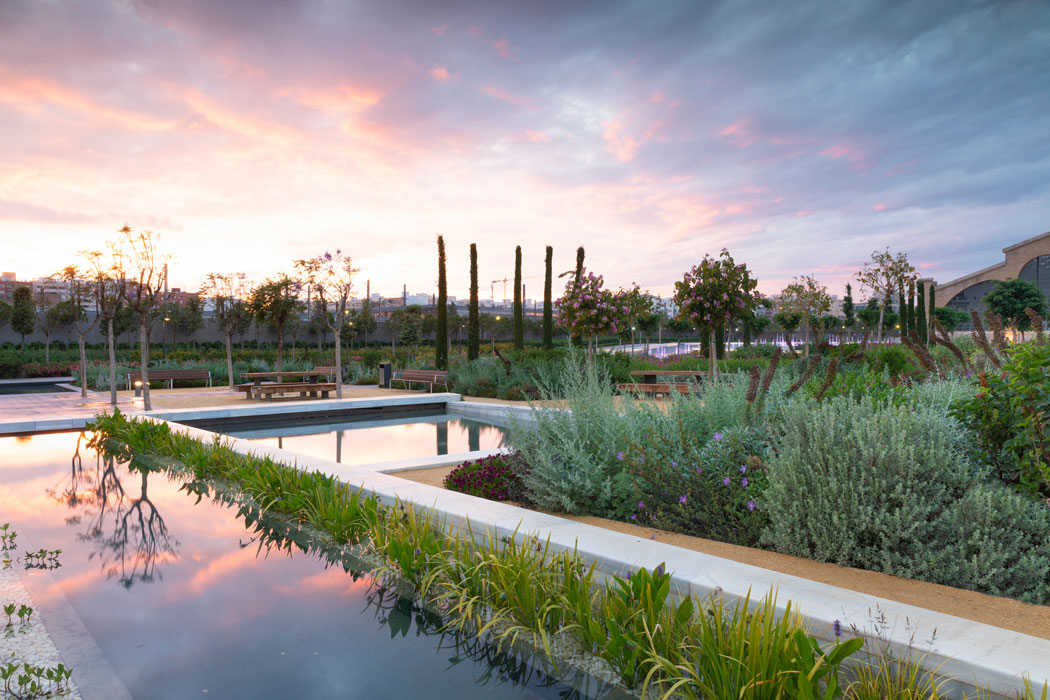 Developed over eight years, the first phase of the park now connects various neighbourhoods that were previously separated by the railway tracks and terminus. It has already precipitated urban renewal in the adjacent downtown district of Russafa/Ruzafa – now popular with cafés, bars and boutique shops.

The new park is part of a larger project that will eventually see the city’s main trainlines relocated underground to free up a total of 66 hectares of land. 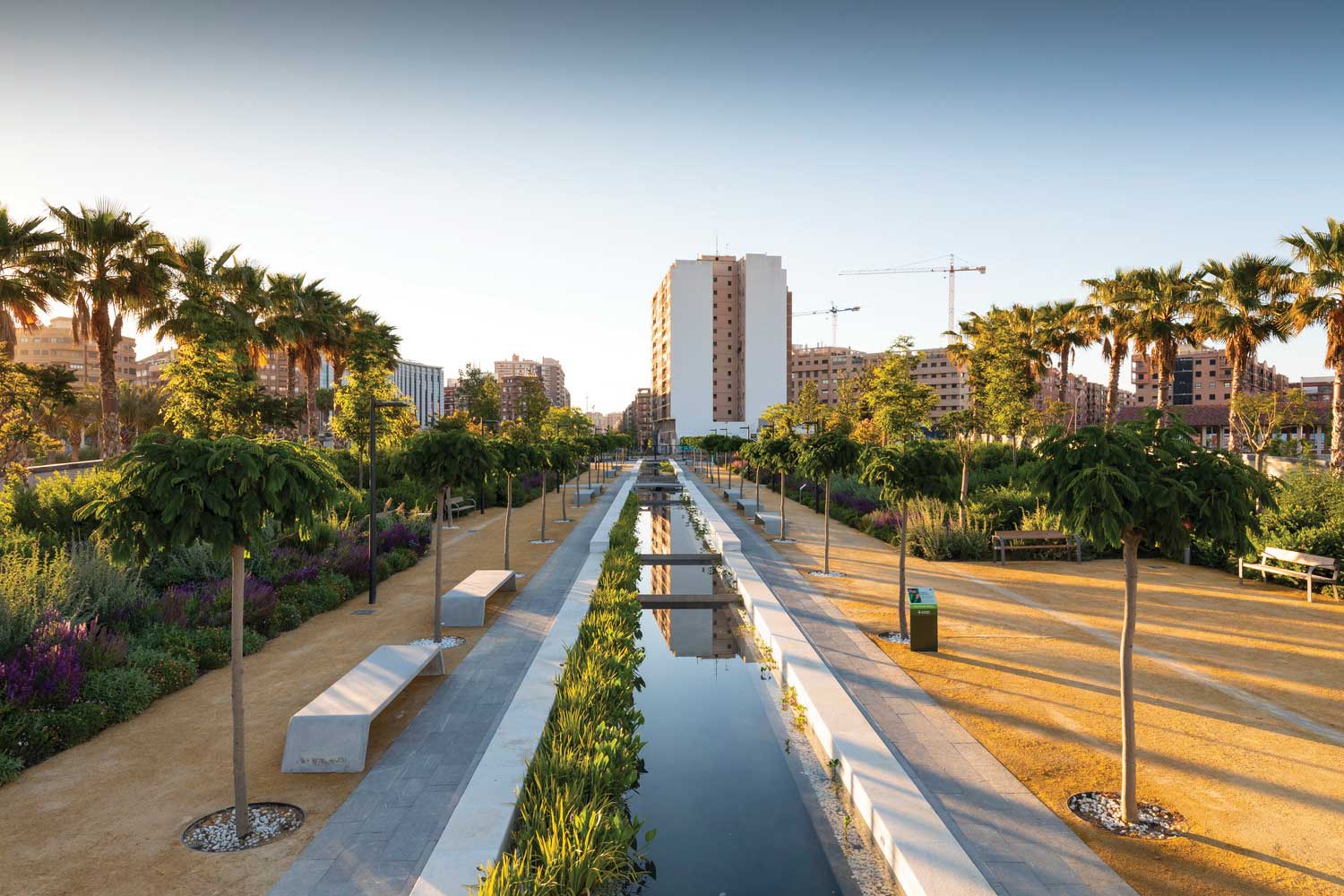 More than half of the area will be planted, and the completed 23ha park will help to resolve important problems by reintroducing biodiversity, creating new public space, providing cultural and office facilities, reversing physical and social segregation, improving the quality and supply of water, and increasing mobility and accessibility among the surrounding residential neighbourhoods.

The park is considered one of the city’s most significant urban redevelopments undertaken since the 1970s, when the riverbed of the river Turia was reimagined as a spine of green space in response to Valencia’s serious flooding issues. 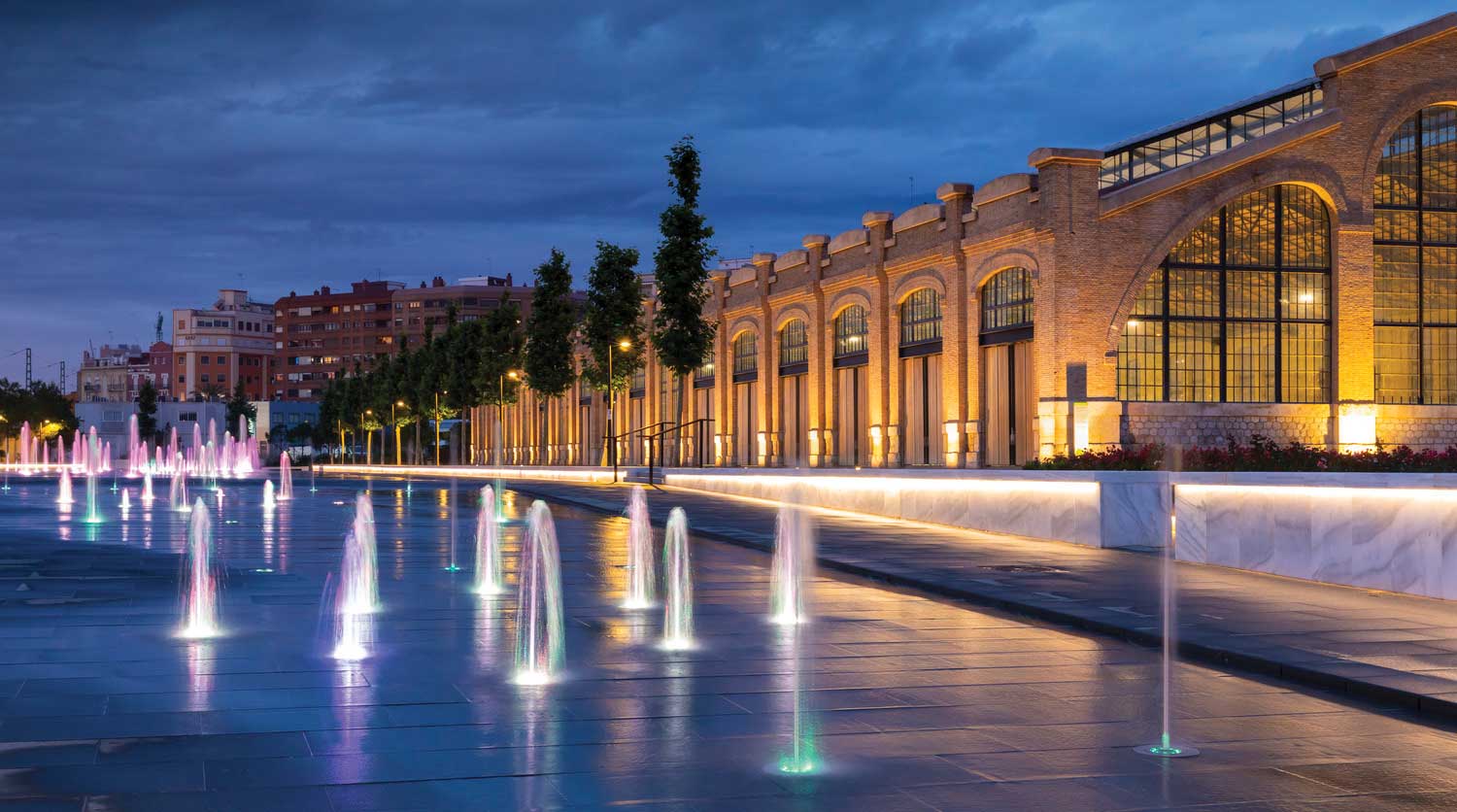 “The Parque Central project sits in Valencia’s long history of a city reinventing itself through large-scale urban development projects.”