The proposal is developed within the framework of a series of intervention programs, in order to respond to the most significant conflictsthat occur along the Reconquista river basin of Buenos Aires; The middle and upper reaches of the basin are those with the highest levels of pollution, both in the waters and in the soils of the cities that settle on the banks of the river.

GLOBAL PROPOSAL FOR THE WHOLE BASIN: 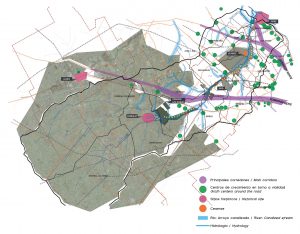 Map of the Reconquista River with the various strengths and opportunities.
Plan: C. Bucchioni, D. Bojko, A. Ferreiro, M. Romero

We took Roggero Dike’s sector, located in the upper basin at 45km of the City of Buenos Aires as a potential field of landscape action and social inclusion. With the proposed intervention, we seek to unleash an impact and momentum in the implementation of the global program on the smaller areas.

The intervention area has a dike that contains the San Francisco lagoon of 1,000 hectares distributed between the cities of Moreno, Merlo and Marcos Paz and the Los Robles Municipal Reserve of 268 hectares with abundant vegetation and fauna. The area has good accessibility, being close to railway branches, highways and bus lines.

The urban environment is a low density residential, with the presence of 1Quintas and large plots of rural and semirural use. 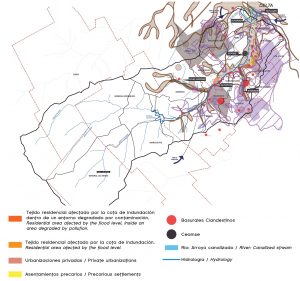 The proposal includes and enhances some activities that are already characteristic of the area. Recreational and tourist activities; cultivation
of vegetables and nurseries of small producers to promote local trade and supply the area; sports, educational and workshops facilities next to the municipal nursery. 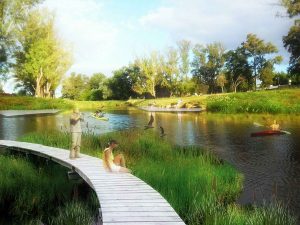 Promoting the use of idle land today, we seek to slow down the growth of the urban sprawl over flooded areas that are a potential regional ecological service.

The natural character of the area is a priority to enhance, making a re-reading of the Pampean landscape and promoting green corridors with native species. In addition to environmental care, the proposal establishes activities in which man plays a fundamental role as a visitor or permanent and active actor in this process of valorization and recovery. 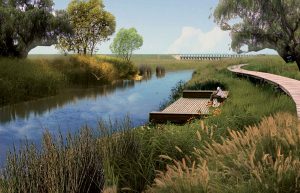 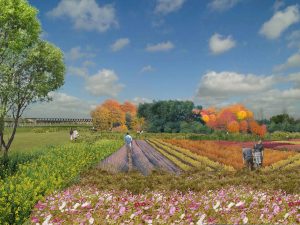 FOCUSING ON THE LANDSCAPE AS A PRACTICE, WE ADOPT THE FOLLOWING PREMISES: 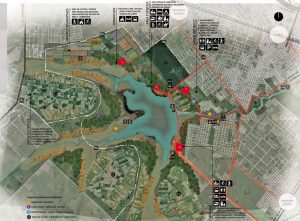 4. Introduction of productive, educational and recreational equipment. Activities that involve people as fundamental actors for the promotion and success of the program.

5. Regarding the vegetation, a differentiation is proposed in the vegetation strata: Grasses and marshes (on the immediate edge of the dike), native groves (forming green wedges around the dike); trees, shrubs and herbaceous plants (form- ing a garden – meadow in the area surrounding the rural tissue), introduction and management of species for horticulture and floriculture (forming controlled cultivation sectors). The main species used include Typha dominguensis, Salix humboldtiana, Parkinsonia aculeata, Schinus molle and Peltophorum dubium. 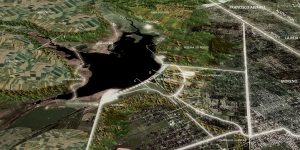 The vegetation generates a transition between urban and rural tissue, this last one begins to open giving access to the reserve.
In this transition connectors between the two landscapes emerge, materialized by green corridors that take the edges of streams or vacant land.

In this way, you are welcome to arrive at the reserve from several points, giving place to various green spaces that help to
limit the growth of the dispersed tissue, generating resting areas intertwined between the tissue and the river, fostering a direct and frequent contact of the neighbors with the river, the vegetation and the native fauna. 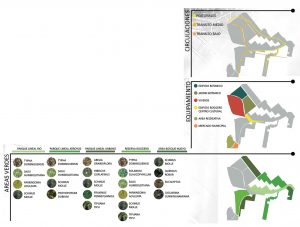 1. A Quinta is a property with housing that is used for rest or recreational purposes mostly for weekends or holidays. They are located in rural areas close to urban populations. They may or may not have a garden or a small agricultural plot.