Urban development proposal presented for the Buenos Aires National Ideas Tender and the river, belonging to the Young District, with the aim of recovering the city’s relationship with the river. It is a park of 320.000 square metres and 2,535 meters of extension over the waterfront.The City of Buenos Aires, since its foundation, was linked to the river for its productive functions, however, the progressive fillers of the river with rubble and sedimentation accumulation caused the coast to move away from the original layout. Thus, the functions of urban life, residential, administrative and commercial uses were far removed from the coast and its accessibility is prohibited by large infrastructures (Aeroparque, the Railway, the Port and the highway).

In short, the city in its changes, developments and evolution, degraded the low valued environmental systems and created physical and social barriers that prevent the continuity and accessibility to the damaged public space. 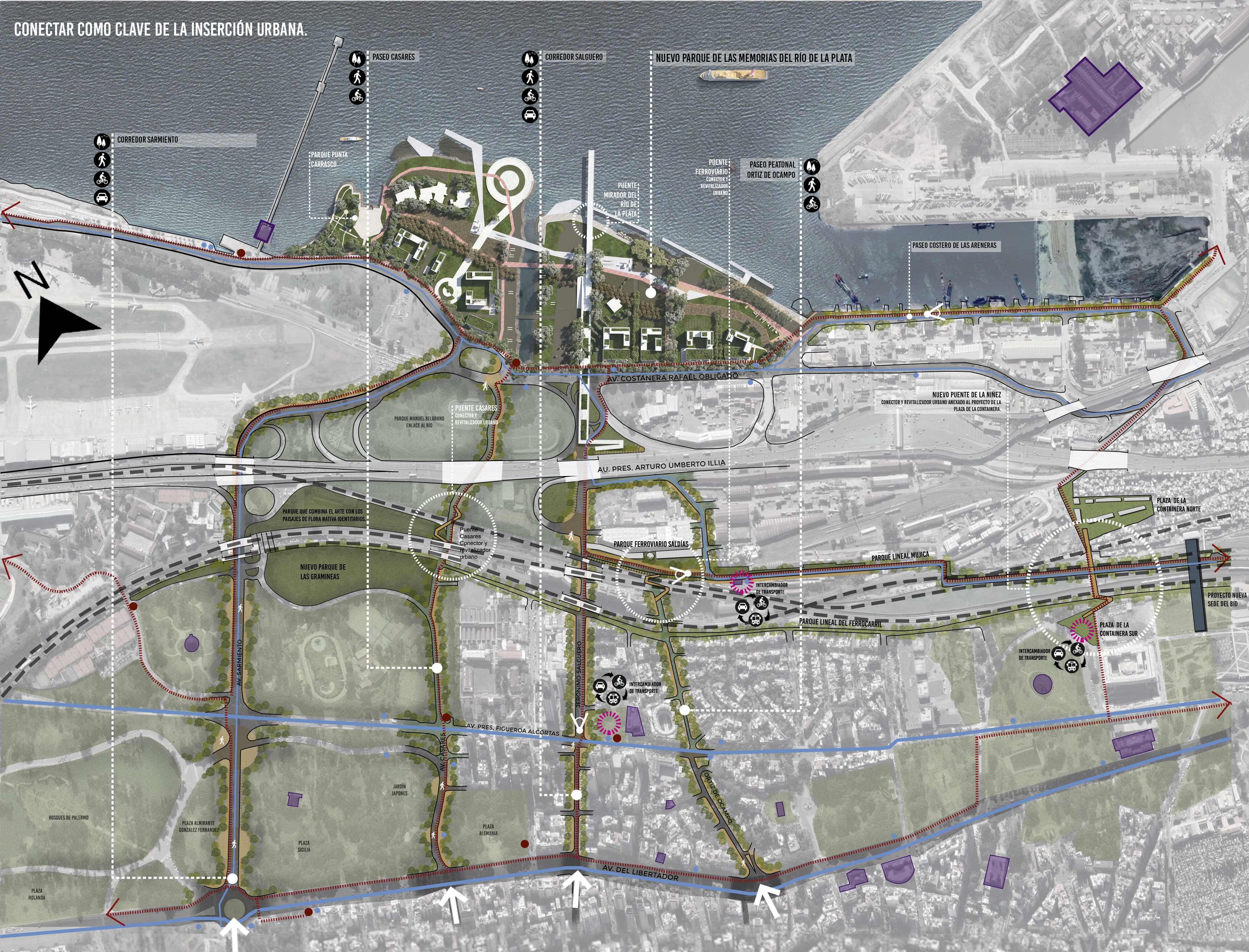 In response to the problem, it was proposed to a green infrastructure system where the key and strategic components are the Parque de las Memorias del Rio de la Plata and Paseo Puente Mirador ecológico, completing the system a catalog of 8 urban connectors of particular landscape qualities. The system allows ecological and social development, balancing and serving as a nexus between the city and the river, reconsider the cultural and natural heritage of the city.

The site intended for the contest, Costa Salguero and Punta Carrasco, represents a unique possibility to return to the Río de la Plata natural river areas so a low housing density was proposed with mixing of uses on Costanera Avenue and large extensions of public green spaces dedicated to applying the concept of regenerative design, since we consider that this will operate as a central axis of ecological development, economic, social and cultural.

Using the ecological restoration of ecosystem relations that are typical of the banks of the Rio de la Plata basin, we can restore the native flora and fauna on the site generating a system of green places and infrastructures that will fill the city with environmental services. 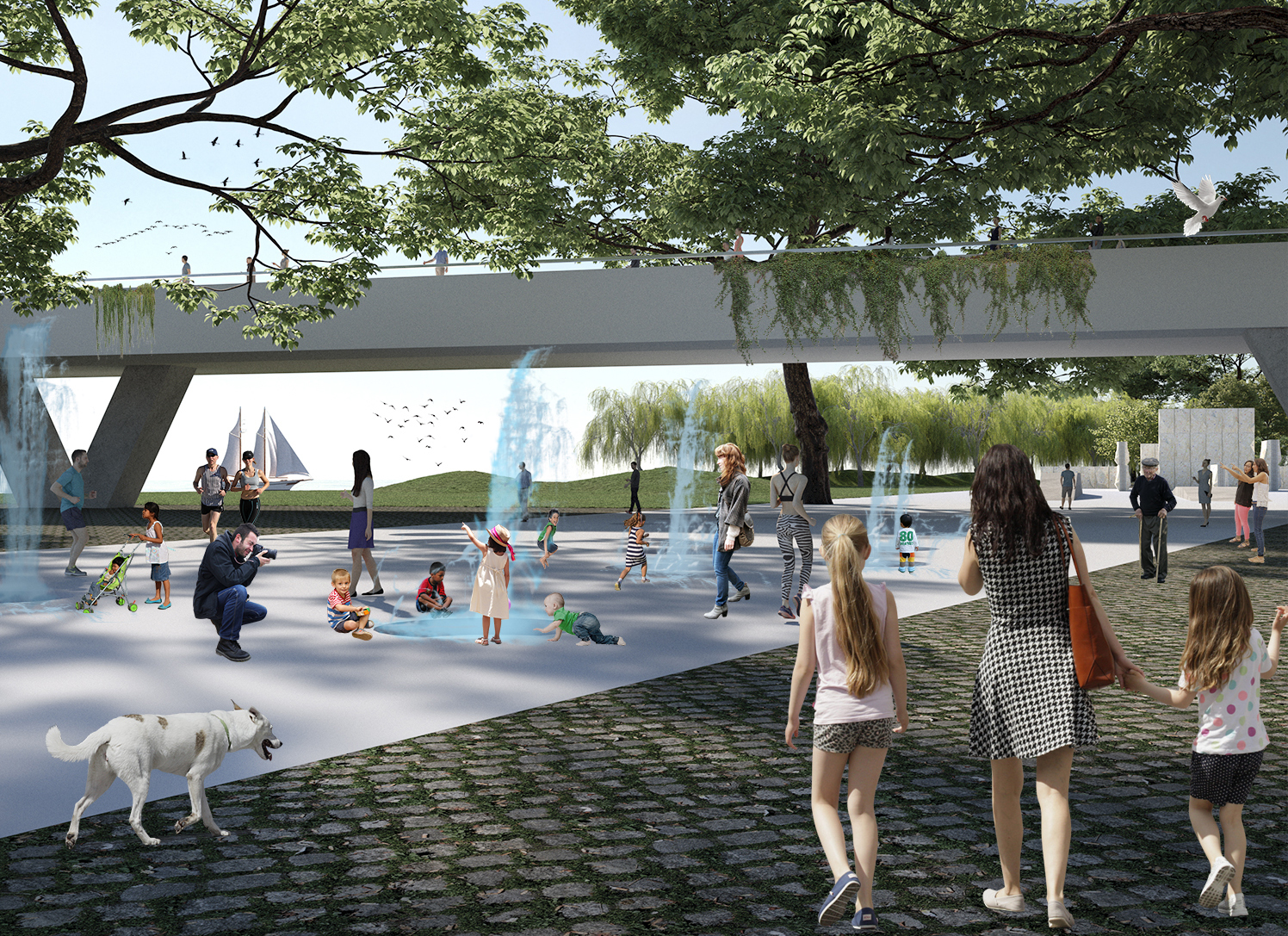 Addressing the multiscale was the way to investigate urban integration by developing strategies that establish a new order in the area and overcome physical, urban and social barriers and vulnerabilities where reflecting on the human scale, the restoration of symbolic landscapes, and universal mobility and accessibility became large challenges.

The restoration of landscapes will be considered as social constructions where the valuation of tangible and intangible cultural and heritage resources that we have called “memories of the place” (such as the railway, the port, the Rio de la Plata and the systems of streams) will be the essential structuring to assemble the new landscape that will boost local economic development and reclaim the identity image of the place. 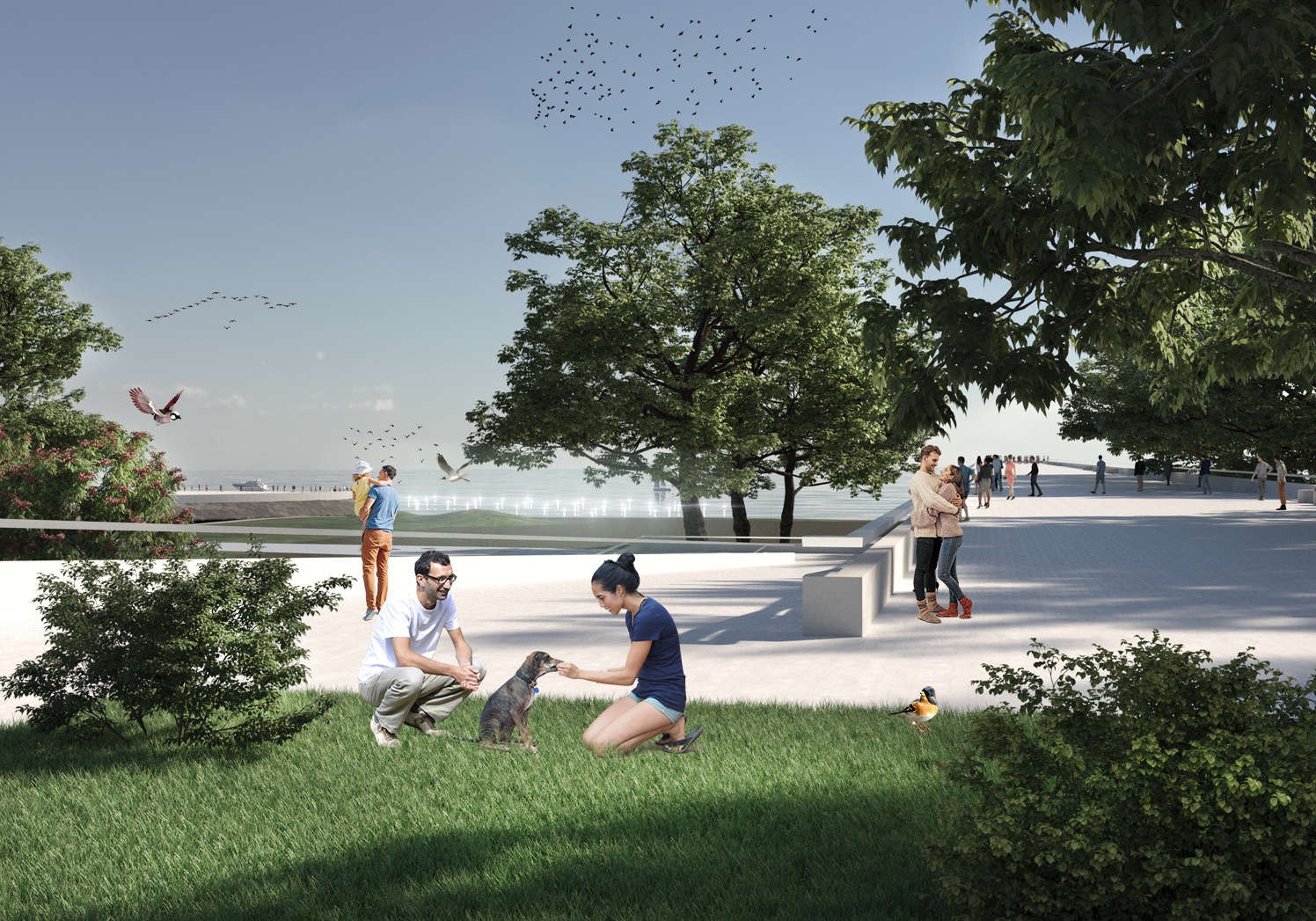 The structural idea of the park has three morphological gestures with defined functional and environmental roles called “stratum” arranged parallel to the coastline and as a singular element the Paseo Puente Mirador ecological (continuation with the axis Av. Salguero, transversal to the river line);

With a main access and esplanade in the same direction as the Ugarteche stream and a series of arrivals and entrances and programmatic corridors that together with the ecological restoration of a large area of soils will turn this new space into a recreational, sports and cultural area, which in a natural environment will be a space for the understanding of the enormous values and the history of the Rio de la Plata basin.