The town of Saulkrasti was looking for its future development path or niche among maritime towns on the coast of the Baltic sea and decided to focus on tourism, recreation and organising various entertainment activities and annual events. A big plus for such events are spacious venues directly near the sea where in addition to sports and cultural activities one can enjoy a romantic mood, the sea and, sunset landscape. As a result, the idea to improve the central part of the beach territory and create the Sea park was born.

For me as an architect the work on the Saulkrasti Sea park project seemed very interesting but also at the same time challenging. Previously I had the experience of transforming forests into public parks, but here was a completely opposite situation – it was an open space complemented by the panorama of endless neighboring Baltic sea.

The project area stretches more than 400 meters on the sea coast in the central part of the town Saulkrasti. The terrain consists of the primary and secondary dune ramparts and more or less flat areas between the dunes. On the one side, this stretched site is bordered by the sea, on the other side – with a pine forest.

According to spatial design theories – in everyday life people are basically moving through a negative (open) area, but they prefer to stay or spend some time in positive space, which is clearly defined with precise contours.

This subconscious reflex that people have inherited from the cave age. Therefore, the biggest challenge for the project was to find a solution – how to let people stay and spend some time in such an open territory.

Sofas integrated into the deck surface of a pedestrian pathway
Photography: Substance

The basic concept of the proposal was to use clear geometric shapes, to mark the area by precisely formed and defined functional zones only in the horizontal plane. The new forms were created by a pedestrian path system lifted slightly above the ground. This would allow to organize the chaotic traffic of beach visitors.

On one hand, there are possibilities to locate active recreational infrastructure of the beach inside the contours of the footpaths, on another – wooden footpaths could at least partially protect nearby plants from a stream of tourists. The sea tends to be variable – it can be from completely peaceful and quiet to loud and billowy with unquestionable power of disasters.

Therefore, exit points of the wooden footbridges on sandy beach were created as wedges against the sea waves similar to the historic fortifications, designed with sharp, outward-facing corners. The triangle form was chosen as key element of the new zoning as the best geometric shape to stay against the external influence.

The triangular shapes of pedestrian footpaths are designed to be located along the entire 400 meters long beach area. Therefore the wooden footbridge and path structure is the key element of the Sea park design.

“Solid wooden deck is not optional because it blocks sunlight, rain, and it creates desert stripes under the footbridges”. 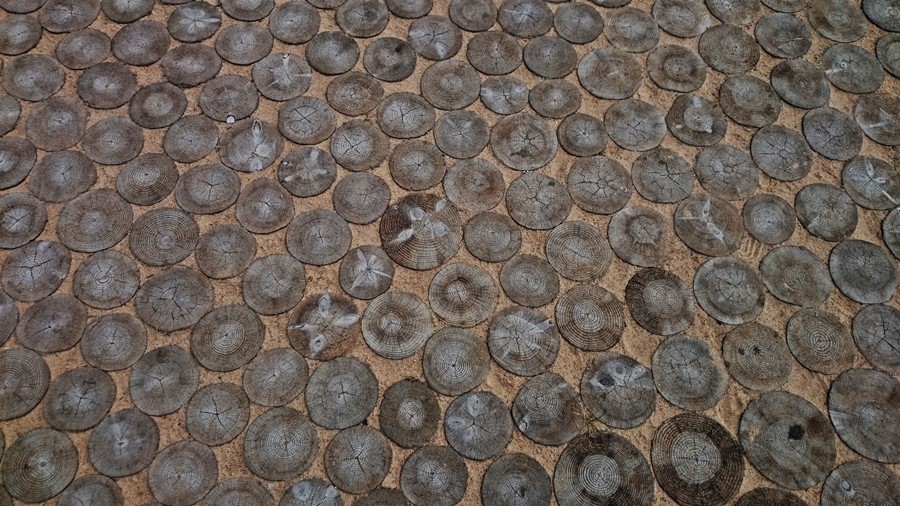 Paved squares made of round wood pavement
Photography: Substance

Therefore, in this project the wooden deck planks are reinforced vertically with slits corresponding to the thickness of the boards in order to avoid the formation of desert stripes. In this way, the wooden footbridge deck becomes a kind of matrix that can integrate all of the park’s small architectural forms – benches, loungers, bike racks and waste bins, which are also made entirely of wood.

Only wooden paving is used in the park. In addition to a pedestrian footbridge, there are paved squares made of round wood pavement. Metal elements are used only for lightning and fitness equipment. 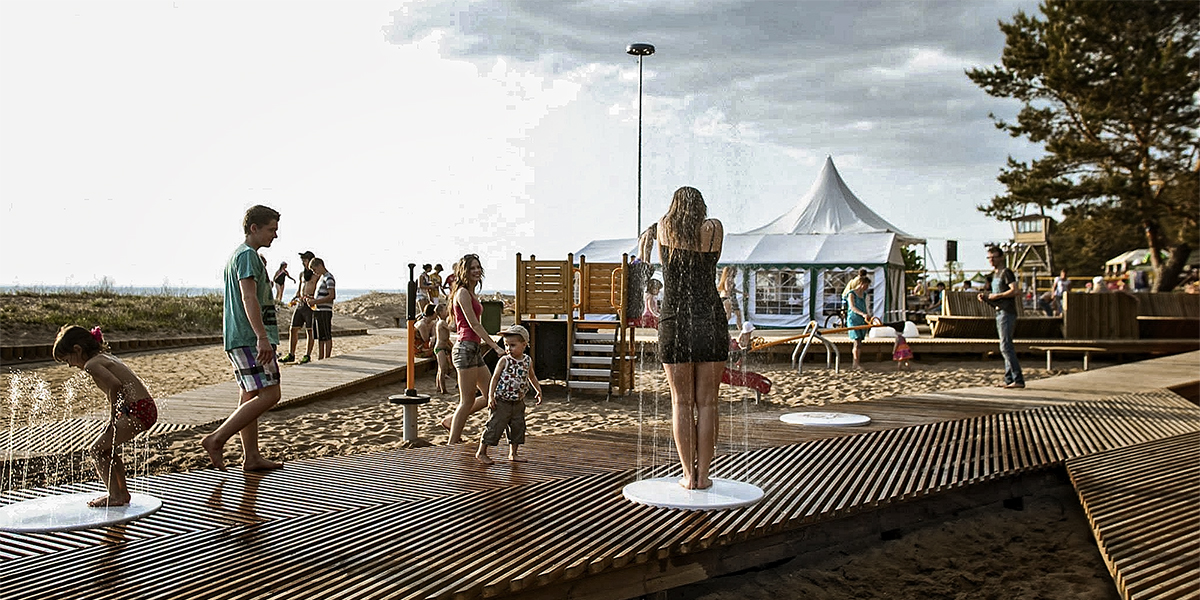