There is no doubt that birds stand out from all the faunal elements present in the landscape, due to their singing, their plumage colors and their flying ability.

As it is evidenced in many cultural manifestations, from prehistoric rock painting to modern multimedia, these feathered animals have been fascinating the senses of the human being since ancient times. 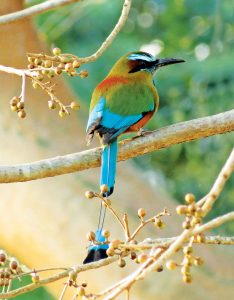 An eye-catching bird due its colorful plumage, it is found from the Yucatán Peninsula to Costa Rica nesting in caves, water wells, cenotes and archaeological ruins.

Its diet consists of arthropods, fruits and even some small vertebrates. Like the other “Toh” bird species (Momotus momota), it is often found perching on wires and trees branches moving its tail back-and-forth in a pendulous fashion, hence being known in Yucatan as “pájaro reloj” (“clock bird”).

The ancient Mayans, fascinated with its colorful plumage and intrigued with its peculiar tail which they thought it was once as large and beautiful as the quetzal’s (Pharomachrus mocinno), made up a legend that relates how the motmot’s tail ended in its actual state. 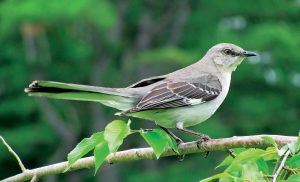 Omnivorous bird that feeds of insects, fruits and seeds, commonly found in North America; its modest plumage contrasts with its vast repertoire of songs, being able to mimic the vocalizations of other birds and even the sound of other animals, hence its scientific name being mimus (Latin for “mimic”) and the Greek words polus (“many”) and glossa (“tongue”) 1, while “cenzontle”, its name in Spanish, derivated from the Nahuatl word centzuntli (“four hundred voices”) 2.

Fascinating many cultures with its sing since the Pre-Columbian era, the northern mockingbird figures in many legends and tales, even being mentioned in one old poem attributed to Nezahualcoyotl, who was a ruler-warrior of the city-state of Texcoco.