Celebration of the souls: Plants and flowers.

Celebration of the souls: Plants and flowers.

The Day of the dead has been declared by UNESCO as Intangible Cultural Heritage of Humanity. Each region of Mexico has its own rite, for example, in the Yucatan Peninsula is celebrated the Hanal Pixán, which in Mayan language means “the food of the souls” in which plants and their derivatives play a major role.

Plants have been essential elements in the cultural development of all human civilizations.

A good example of this statement are the Maya, who have come to develop a comprehensive use of flora, thanks to the extensive knowledge of their environment2, which is reflected in a multiplicity of cultural aspects, from agriculture and nutrition to rituals.

In the case of the rite known as Hanal Pixán, which is the result of the mixture of Mayan and Christian traditions brought by the Spaniards, there exist ethnobotanical* studies that have counted up to 117 species of plants and 3 hybrids that are used in the various activities that such celebration includes.

*Ethnobotany: science that studies the interaction of human groups with plants, such as their use as food, medicinal use to produce instruments and tools, housing, transportation, clothing, and their partnership in social life (rituals, games, music, etc.). 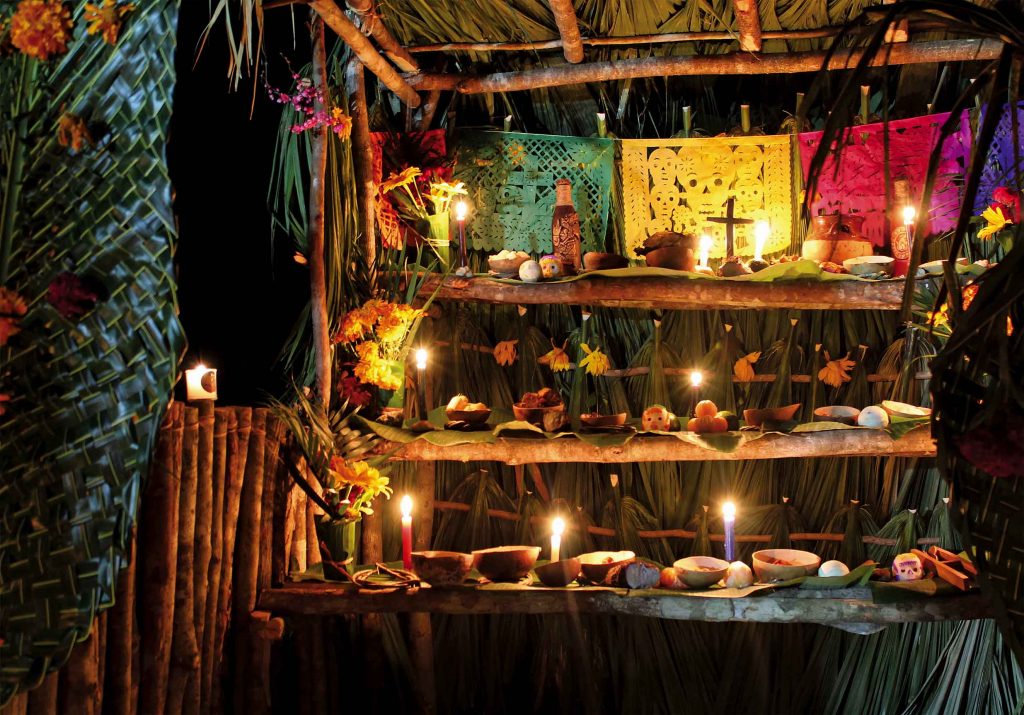 The elements of the altar nourish the souls of the departed.
Photography: Cacho Navarro

Traditionally, the base of the altar was a table without nails (to avoid frightening the souls), using branches tied with henequen fiber  (Agave fourcroydes Lem.) to form the platform, holding it with four wooden pitchforks. The table is covered by a tablecloth, white or gray for adults and colorful for children; upon which the photograph of the deceased is placed along with the offerings to nourish his soul during his visit to Earth, such as food, drinks and candies.

The henequen was once called “green gold”, due to the economic rise of this fiber in the nineteenth century; or Sisal, as the port from which it was exported worldwide.

The altar is decorated with candles, religious accessories, flowers and incense burners, as an element that must be present in all Mayan ritual is incense, mainly from copal tree (Protium copal Schltdl. & Cham), known in Maya as “pom”. 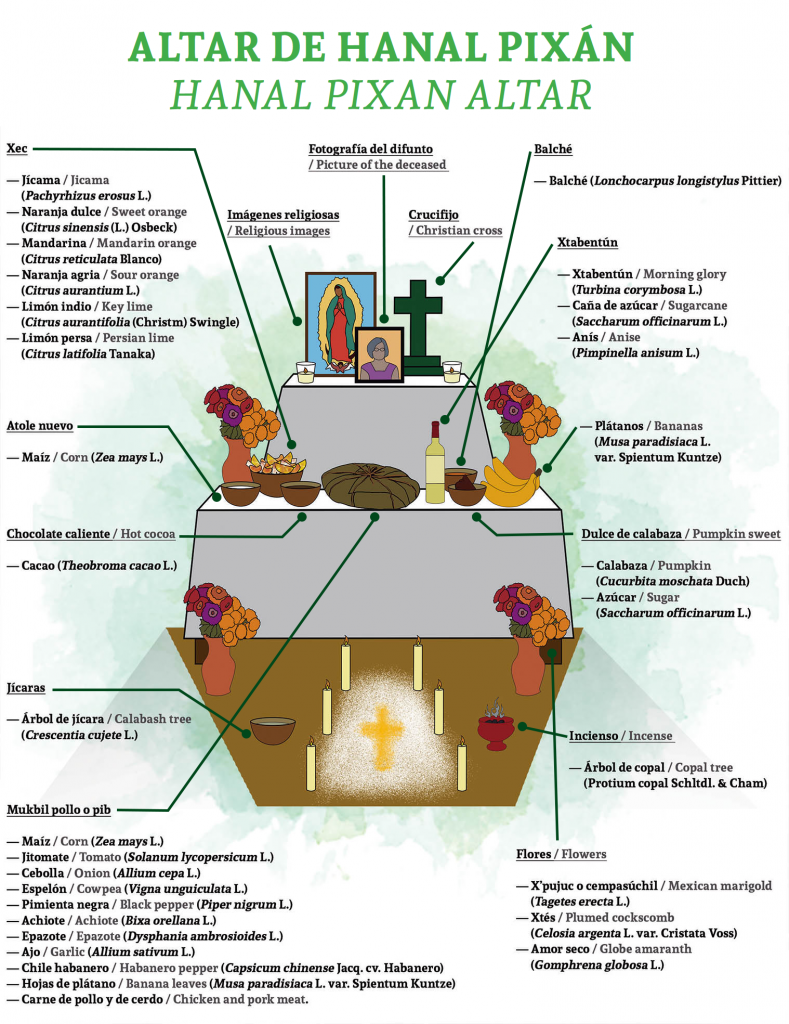 Among the foods offered up to the dead, the most characteristic is the mukbil pollo (from the Mayan word muk, “to bury” and bil, “to stir”), also known as pib (that means “buried” in Maya) . It is a dish that consists of a kind of tamale that is made with cornmeal dough (Zea mays L.) containing chicken and pork tenderloin, tomato (Solanum lycopersicum L.), onion (Allium cepa L.) and espelon (Vigna unguiculata L.) as stuffing; it is spiced with salt, pepper (Piper nigrum L.), achiote (Bixa orellana L.), epazote (Dysphania ambrosioides L.), garlic (Allium sativum L.) and habanero chile (Capsicum chinense Jacq. cv. Habanero). 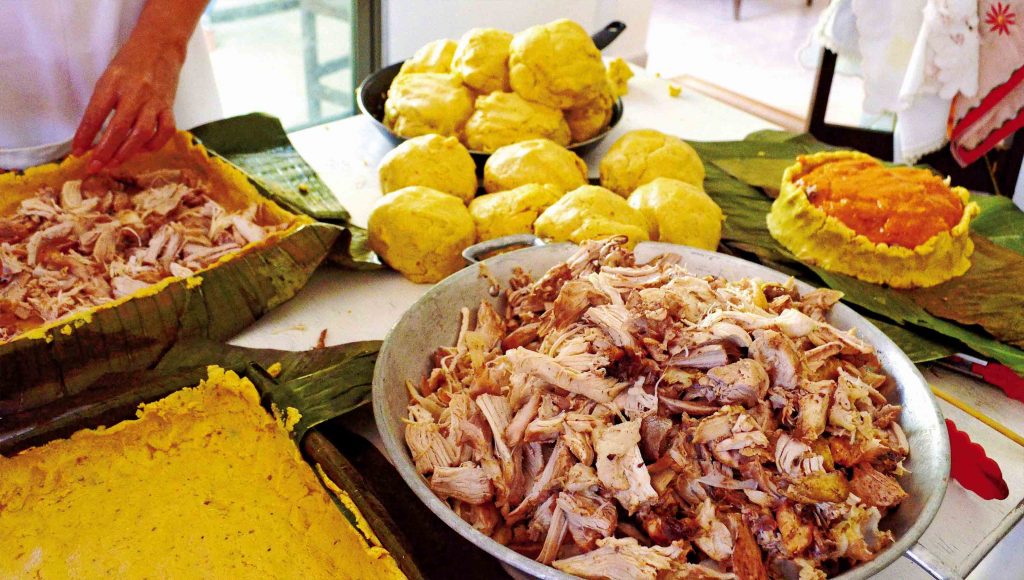 Cooking process of the pib or mukbil pollo. Photography: Razi Marisol
Razi Machay, Elaboration of the Pib. Day of the dead. Yucatan, Mexico. CC BY 2 .0, https://www.flickr.com/photos/marysolra/15687351705/

Such tamale is wrapped in banana leaves (Musa paradisiaca L. var. Spientum Kuntze) and then is slowly cooked underground, in the Mayan fashioned way (hence the name of the dish), in a hole that functions as an oven, heated by firewood or stones, which gives the pib crust a crunchy texture and a distinctive flavor. In addition to this dish, corn is also used to prepare tamales, atole and tortillas. 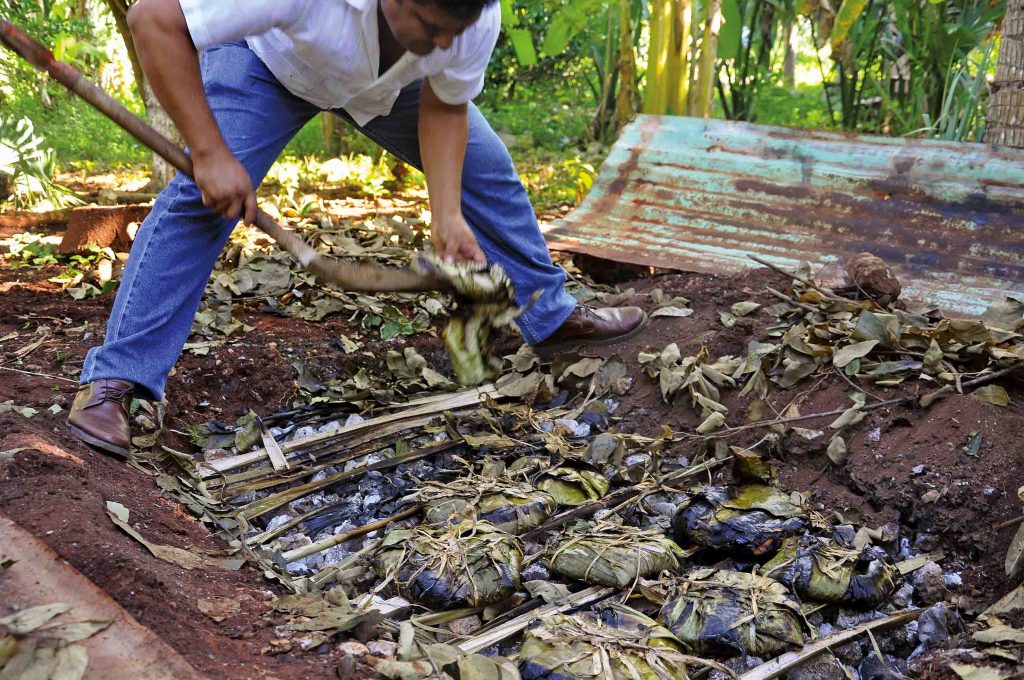 Taking the pibes out from the “underground oven”.
Photography: www.millsapscollegeyucatan.com 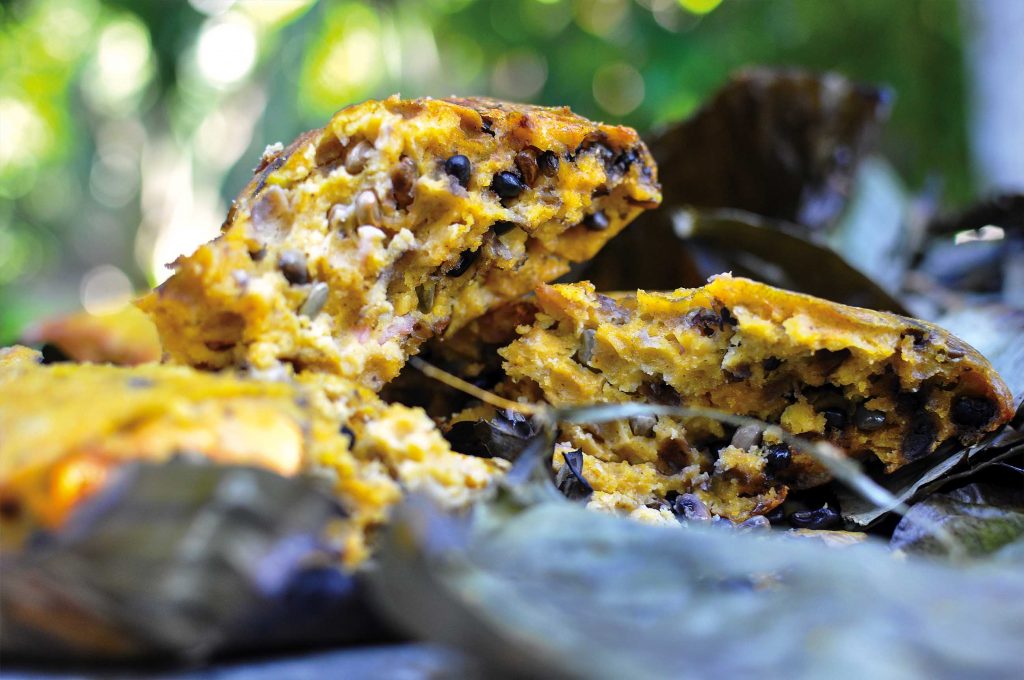 The inside of a pib after cooking.
Photography: www.millsapscollegeyucatan.com

As for drinks, you cannot miss the traditional hot chocolate (after all, the genre of the scientific name of the cacaotero, Theobroma cacao, is the Greek for “food of the gods”). 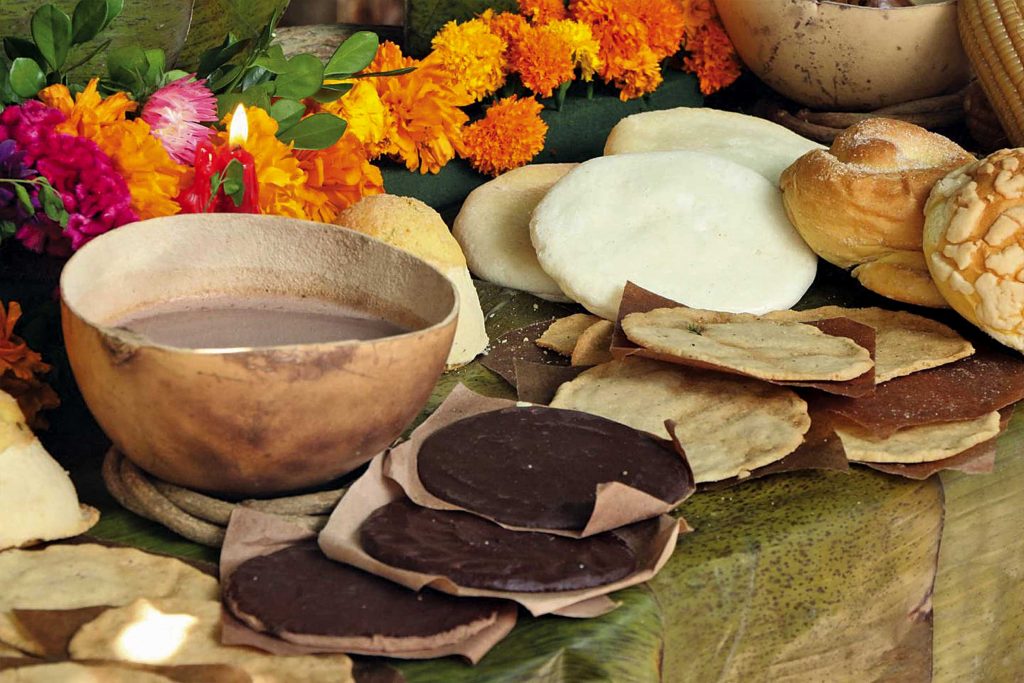 It can also be offered up the Yucatecan alcoholic beverage xtabentún (in Maya, “which is tied to the stone”), whose ingredients are honey produced by bees with nectar from flowers of the vine of the same name (Turbine corymbosa L.), sugarcane must (Saccharum officinarum L.) and anise (Pimpinella anisum L.). 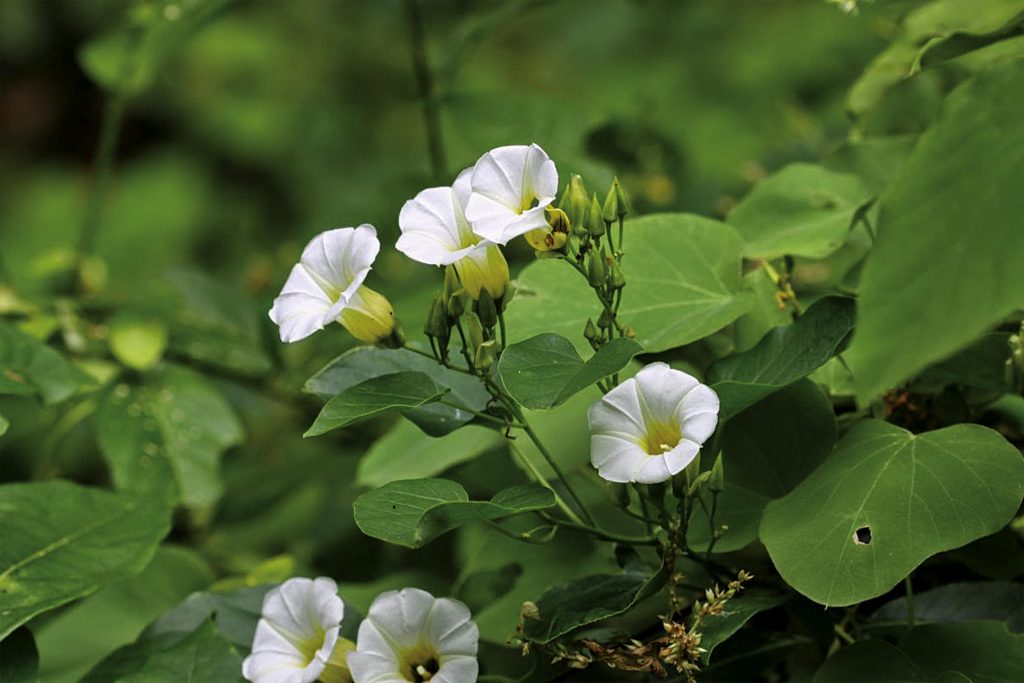 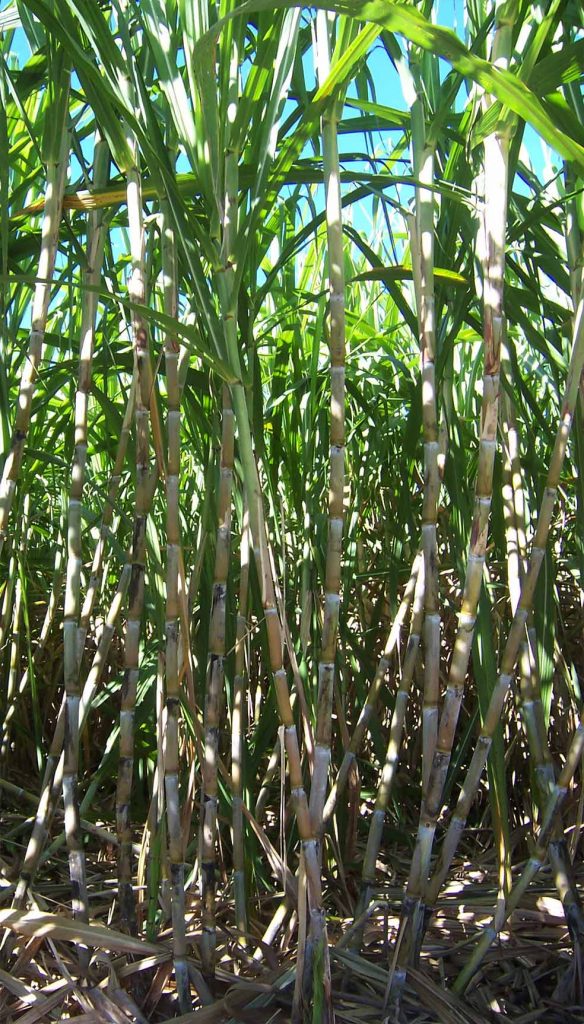 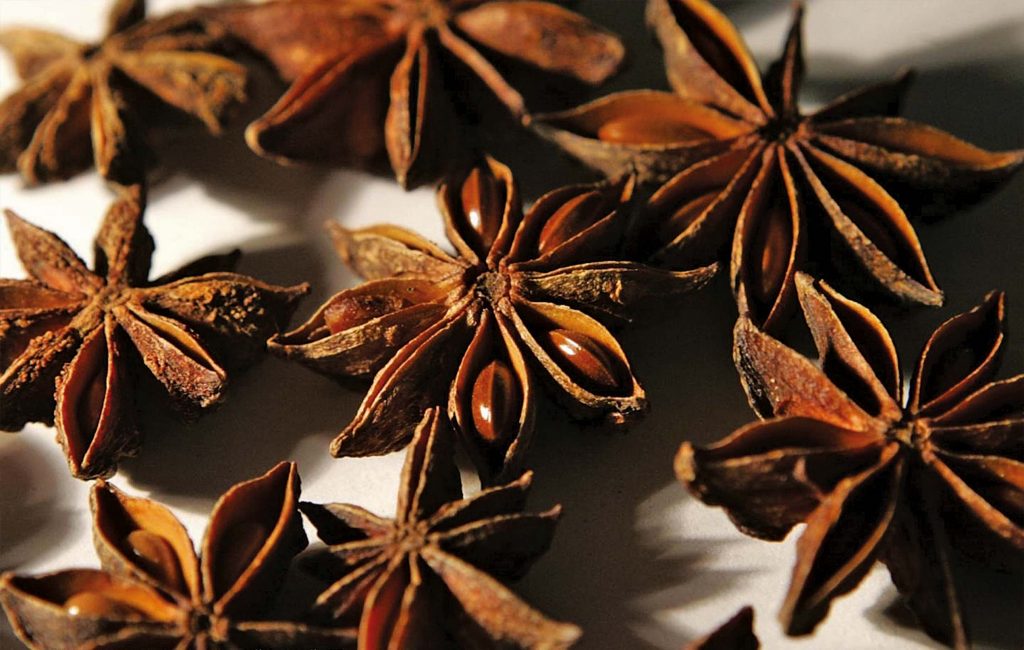 Other option is the sacred drink of the Maya, called balché, product of the fermentation of melipona bee honey and balché tree bark (Lonchocarpus longistylus Pittier), mixed with other ingredients.

The flowers are an important part of the offering, either for their beauty, for their smell, for representing the fleetingness of life or because their color has been linked by the Maya with a cardinal point or deity, reaching an ethnobotanical dimension of deep meaning.

For example, the white represents north, besides meaning purity, the sacred and the sky, while the black represents the west and the natural death. Meanwhile, the yellow refers to the south, besides being a symbol of light, the sun, and life, reason why the dead flower or cempasúchil (Tagetes erecta L.) is used, known in the peninsular region for its Mayan name, X’pujuc, for being of this color. 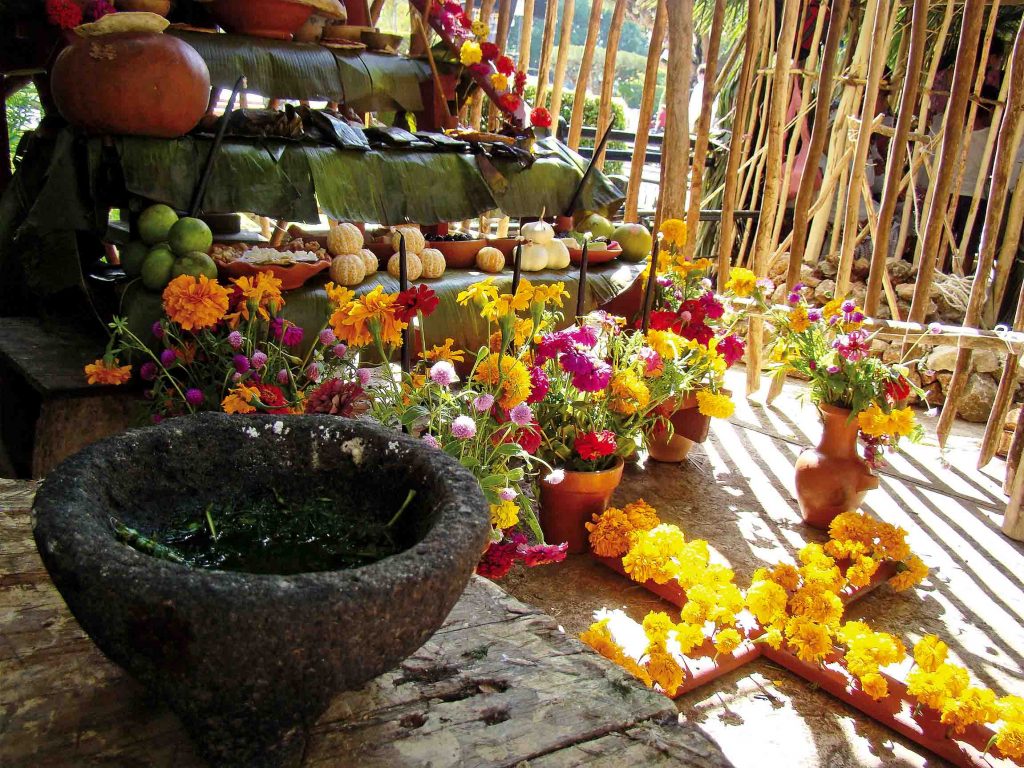 The green, like the branches of lemongrass (Murraya paniculata Jacq) used to decorate the altar, correspond to the center of the world, representing life. At the same time, the red represents the east, the blood of Christ and the Resurrection, so the xtés red flowers (Celosia argenta L. var. Cristata Voss) are used. Another color present on the altars is purple, like dry love flowers (Gomphrena globosa L.), which represent the underworld and death, besides the mourning. 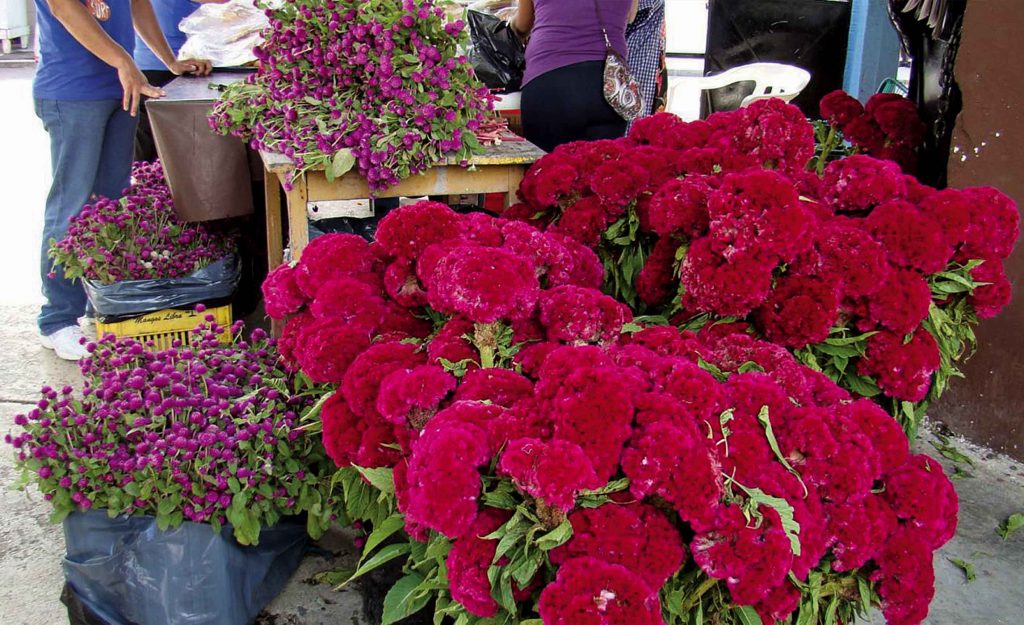 In addition to those mentioned above, other flowers commonly used in the altars are roses (Rosa vulgaris L.), the zinnia (Zinnia elegans Jacq.), and lilies (Crinum erubescens Aiton), totaling up to 55 plant species that have been counted as ornamentally used in this rite. 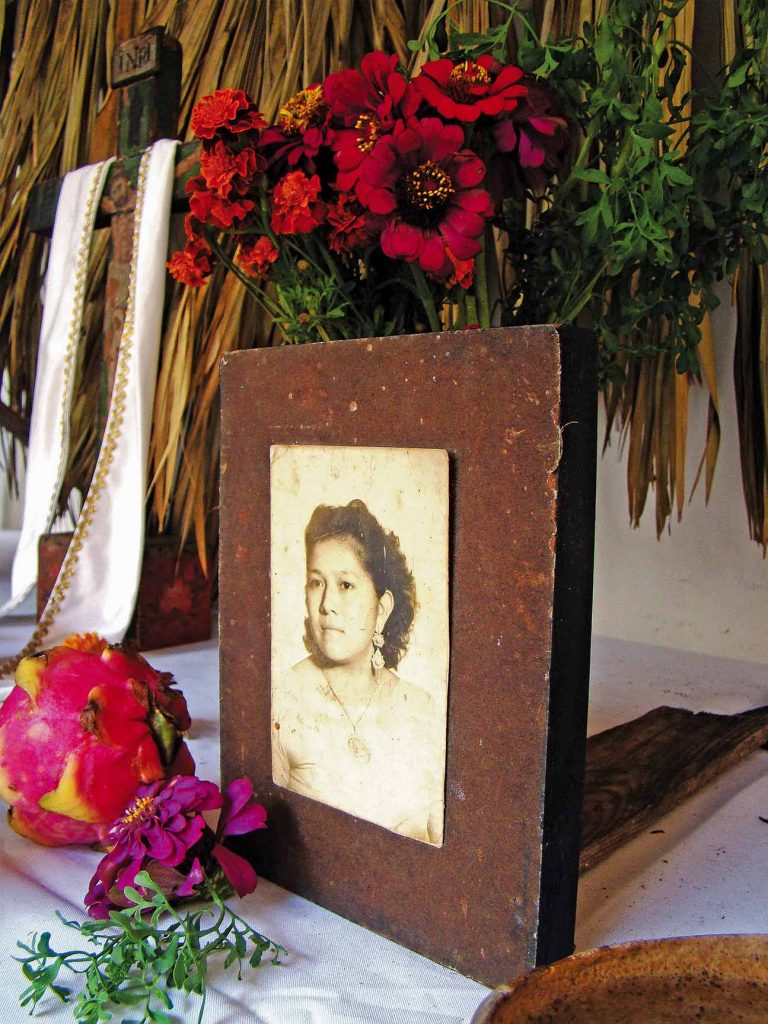 Of a mystical and spiritual origin, Hanal Pixán is, without doubt, an excellent sample of the knowledge and diversity of uses that the Mayans gave to plants, as well as the sign of a strong cultural syncretism.

Fortunately, this rite, inherited from our ancestors and part of the cultural heritage of the Yucatan Peninsula, has continued to transform and has survived to this day as a beautiful and colorful tradition with which we honor those loved ones that departed to the other world.

Do the souls of our dead really come back to taste the offerings that we place on the altar? Nobody knows for sure, but what is certain is that they will continue to accompany us as we keep their memory alive.