The name Torzano is an acronym formed by “tor”, which means natural and vertical stone accumulation; and “zano”, which means hill and is also part of Altozano.

The residential development was projected to be on the edge of a 12.5 hectare land extension. It was born from the idea of rescuing the sinkhole originated by the exploitation of basalt during the 80’s and 90’s, to turn it into a 25,000 m2 park, which is now the heart of the development.

When the Azzequi architecture studio began the project, it insisted on respecting the morphology of the land, located on the slope of a hidden hill. The lines used to design the park’s square were linear, since the edges of the lot were sharp and the angles closed. 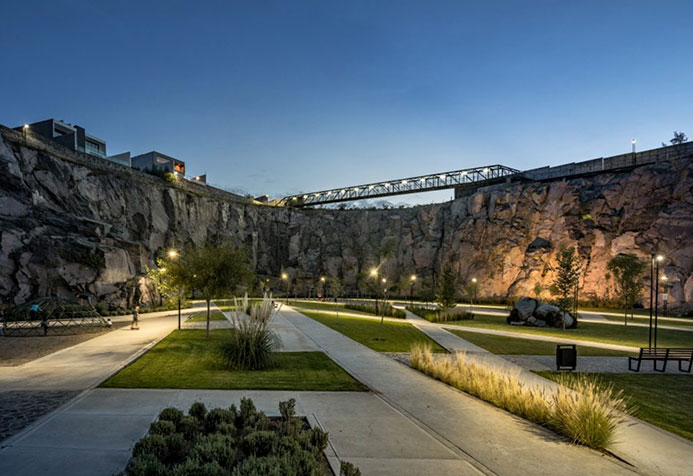 It was conceived as a natural oasis in the middle of the city, aiming to stimulate all the senses. A unique soundscape. The park is protected from the outside hustle and bustle by large basalt stone walls, allowing a diversity of natural sounds, or the user’s interaction with the materials to be perceived. The result is a complete and unexpected experience with the environment through acoustics.

The architectural program was planned to have several uses for the residents: an outdoor gym and playground, a bridge with a 40-meter-high observation deck, multipurpose courts, and a club terrace. All these amenities are connected by 3,920 linear meters of walkways, whose route allows an immersion in the serenity of the sound of the trees, the song of the birds and the echo of the stones.

In the process of recovering the stone wall, careful cleaning was carried out by hand, which lasted approximately two years; the ground levels were also restructured to avoid water stagnation. Reuse and adaptation of the debris to cover floors and walls was considered, and even some large rocks that matched the garden design were relocated. For the landscaping project, monochromatic tones were sought, dry greens that would add depth and at the same time contrast with the lilacs, violets and purples of the shrubs and ornamental plants.

The range of plants considered included species such as fountaingrasses, lavenders, flax lilies, junipers, creepers, among others. Over the years, the meadow has been reforested with more than 370 trees that essentially provide lushness and mountain spirit: jacarandas, poplars and comoros. 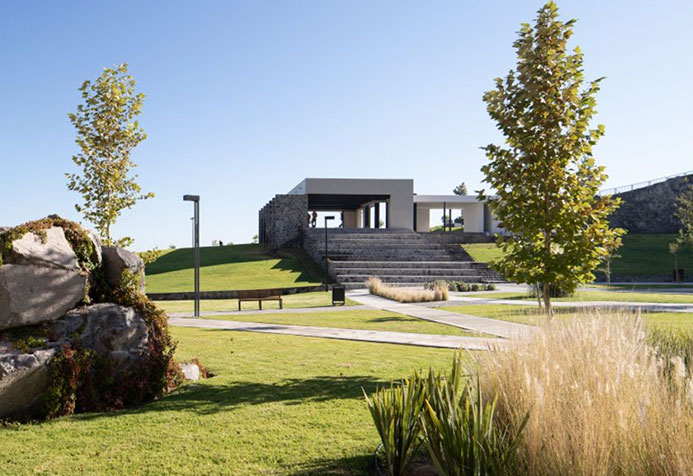 American ashes, sweetgums and myrtle were planted in the ridges, these plants make an ideal canopy for the walkways. The objective of the floral choice was to observe the transition of the seasons of the year through textures and temperatures: from the violets of spring to the reds and oranges of autumn.

The urban planning of the Torzano residential complex is an example of the natural restitution of what was once an exploited property, intervened by man, to transform it into a monumental green space, framed by striking stone walls, where the vegetation has created its own atmosphere and acoustic identity, offering a connection between the space and the user. Torzano offers a sound oasis to live in Lagos de Moreno. 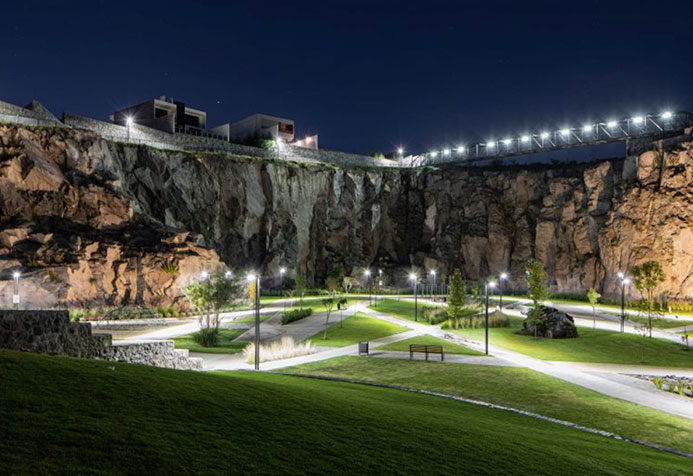