The Lighting Urban Master Plan consists on five projects which comprises the whole historical centerof the city of San Francisco de Campeche: the boardwalks, the six bulwalrks and the walls that were built to protect the city from pirates; the pedrestian 59 street, the Parque de la Alameda “Francisco de Paula Toro”, and the building complex that used to be the Marine Customs Office, which was rebuilt and now houses the library and the Centro Cultural “El Palacio” (a Fortifications, Commerce, and Navigation Museum). 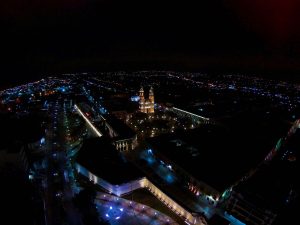 The Mexican lighting design firm 333 Luxes developed the following concept for the group of restauranteurs, architects and authorities: using less amount of energy to give maximum beauty on the building, obtaining a very uniform and soft warm lights, with accents on architectural details of the buildings with a neoclassical style facades streets, and city walls; all this coordinating the on/offs, dimming, and fade outs of those lights with the multimedia presentation that displays on the library building’s facade every night at 20:00 hrs.

View of the Plaza de la Independencia (Independence Square), including the facade of the Campeche Library, the park kiosk and the cathedral’s towers.
Photography: David Lara

The lighting from the Maritime Museum and the Library of San Francisco de Campeche seeks out the details of a neoclassical building, the columns are highlighted with an inground projector at the lower level.

The upper cornice around the perimeter of the building is being illuminated with warm light from a LED Line system which dims when the multimedia projection it´s going to start adding a new skin to the building. The LED light fixtures recessed in floor does not dazzle the eye of passers thanks to the sandblasted glass and the use of honeycomb filters. 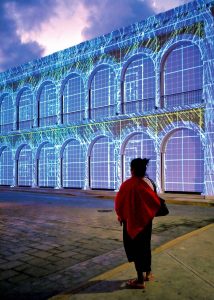 Thanks to its changing lighting, the facade of the library and museum complex is transformed before the eyes of visitors.
Photography: David Lara

The diffused lighting that baths the walls are programmed via the controls from the relays panel in order to keep coordination with the multimedia presentation that’s being held on the nights on the same building allowing this to transform it to his new lighted “skin”.

The wooden beams within the ceiling of the building corridors are illuminated with a system of indirect projectors soft-warm light while bathe the interior walls porch.

In the Alameda Park are huge trees that flank the central plaza. Those trees and the stone pavement of the 18th century are part of the attraction of this old urban public space created for people to meet with their friends or family.

We designed a system of pole fixtures placed on both sides that provide gentle lighting to passersby.

This paved floor embraces a semi-enclosed atrium that embosoms at the sight of the passer with their fences of inverse arcs enlighten with inground LED fixtures with a 20° optical. 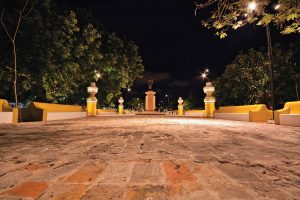 The success of this project is based on the care taken with the documentation of stone brickwork that were in the central square; because under that floor pass electrical installations of the project.

Another gain of the lighting project was to bring back the beauty of the ancient trees that exist in the park, from the organic state to the artistic state in a sublime way, creating awareness of its importance for future generations. The lighting of the foliage was conducted with LED spotlights subject to the branches with plastic straps.

In the center of the square there is a sculpture of Benito Juarez, which receives light subtly from two projectors on the same system. The pinnacles bordering the park are illuminated with inground fixtures for an added drama in the vertical elements that surround the park. 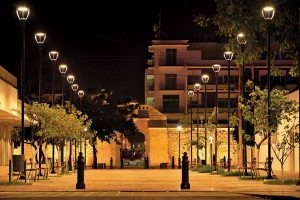 One of the doors of the walls.
Photography: David Lara

The boardwalk in Campeche is not only a tourist destination, but is also a hub of family life, entertainment, relaxation and exercise. The bollards on Campeche’s boardwalk aim to give birth to two main routes: the bike path and the passerby’s path.

Another advantage of the lighthouse bollard (specially designed in our office for this project) is its fully automated system that allows off and on depending on time of year, season and holidays in which you are at a programmable time. 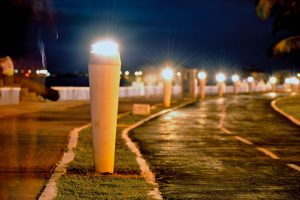 About the target of saving energy, we do achieve that by efficient use of lighting and automatic controls for the fixtures.

Comparing sodium vapor lamps there were before, with metal halide and the electronic ballasts implemented by the project, boardwalk energy savings for the entire city would be around $ 25,000.00 USD and almost 50 tons of CO2 less emitted into the atmosphere annually. 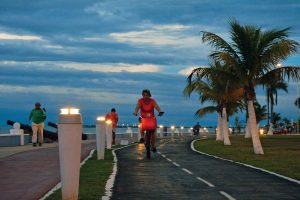 The illumination of the bike path that runs along the boardwalk of Campeche automatically turns on at dusk.
Photography: David Lara

In summary it can be said that the intervention realized on the historical center of Campeche not only modernized the city and one of the most visited public spaces, but also meets with some strategic areas of identity, sustainability and energy savings in which the government has been working on.