RIMBIN IS AN INFECTION-FREE PLAYGROUND, WHERE CHILDREN CAN PLAY, TALK, AND LAUGH TOGETHER WITHOUT RISKING THE SPREAD OF COVID-19, AND WITHOUT LOSING THE FUN OF PLAYING.

Due to the current Coronavirus pandemic, children haven’t been able to visit playgrounds for a long time. Even though playgrounds have reopened in Germany, playing together with unknown children cannot be now, without any risk of infection. Internationally, several countries still keep playgrounds closed, without a clear plan as to when they will reopen again.

Children need interactive outdoor play. For them, the social and physical stimulation are necessary for physical and mental development, and to learn important social skills. Evidence for this can be found in numerous studies, for example in the meta-analysis of Broekhuizen, which examines the results of over 35 observational and experimental studies.

Based on this evidence the two inventors asked themselves a question: Can a space be created that protects against potential contagions, yet still, allow complex interaction and communication? 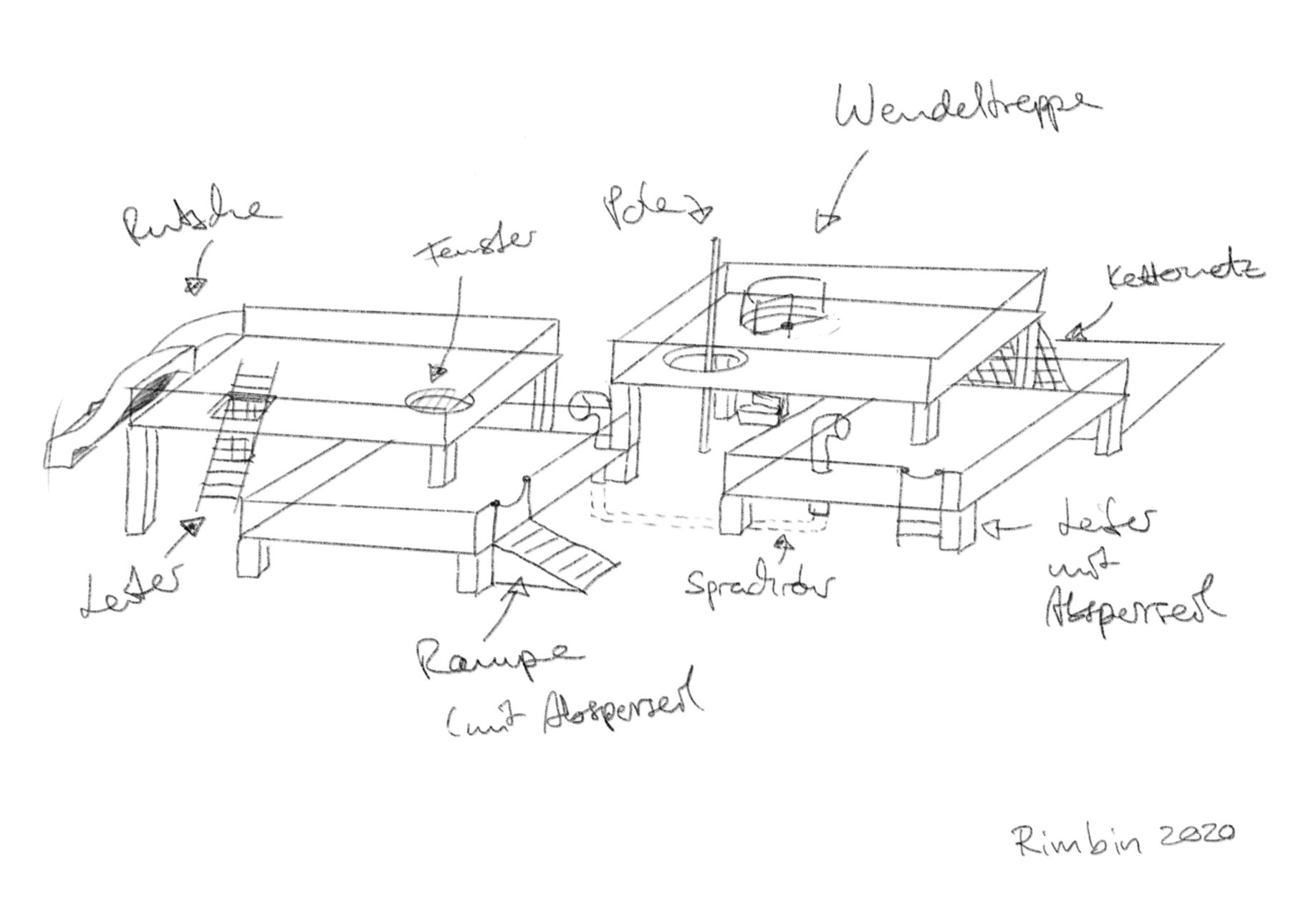 To solve this problem constructively, designer and artist Martin Binder and psychologist and publicist Claudio Rimmele have developed the playground concept Rimbin.

The name Rimbin is composed of the two English words rim for edge and bin for container, and describes the individual play areas of the playground. The name is also a neologism made up of the first syllables of the surnames of the two inventors.

Rimbin provides each child with his or her own playing platform. There is a playground path leading to each of these platforms with a separate entrance.

When an area is occupied, this can be seen at the entrance gate. Since the areas offer enough space, siblings or children from the same household can of course use the same space. Apart from this, children can use the areas one after the other. It is easy for parents to supervise the kids and make sure no other kids enter the play area since there is only one elevated path to the play area.

In highly populated areas we propose playground supervisors to introduce time slots for children to spend on the play areas to avoid that an area is occupied by one child for several hours. Furthermore, the modular concept allows to adapt the number of play areas to the expected volume of playground visitors. 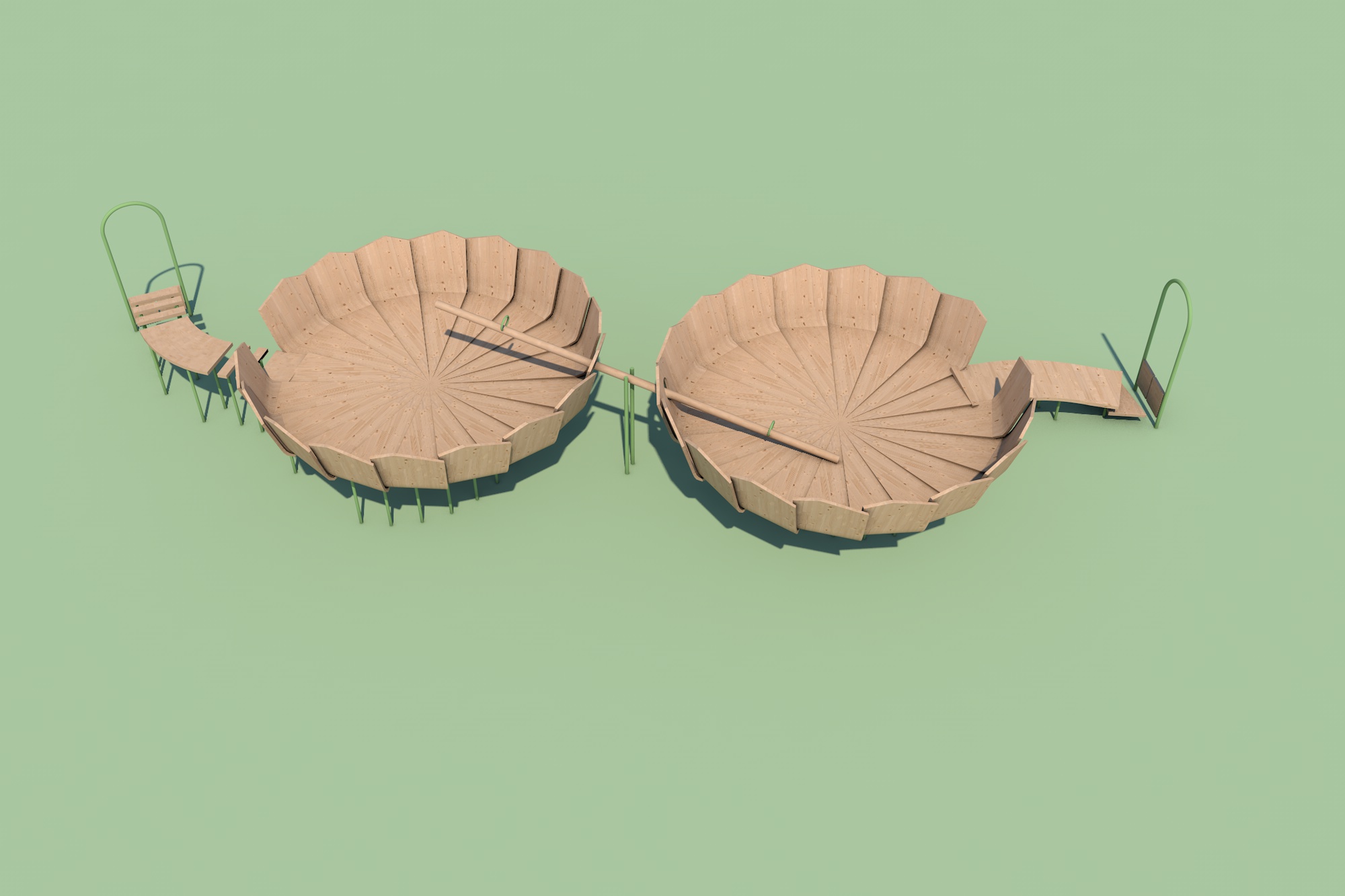 Between the platforms, children can communicate to each other with the help of speaking tubes. These connecting tubes can transport the sound of speech through the magic of physics. Thus children can conduct a secret playful dialogue without the supervision of their parents. The speaking tubes are placed on the sides of the playing areas with enough distance so children are not encouraged to touch or lick the funnels at the end of the speaking tubes.

The biggest risk of infection with the virus as known so far, is through direct human contact, nonetheless, the space has installed disinfectant dispensers to make it easy for parents who wish to clean the areas exposed to touch in order to lower the risk of infection as much as possible. All materials that are the most exposed to direct contact with playing children, like handles and tubes, are made of metal and can be sanitized.

In addition, interactive playing options such as a seesaw and other physical games are offered between the different platforms. Children, therefore, share a common playing world at a safe distance. Rimbin is a place made for children – a place where they can immerse themselves in their world, learn from others, and let off steam. 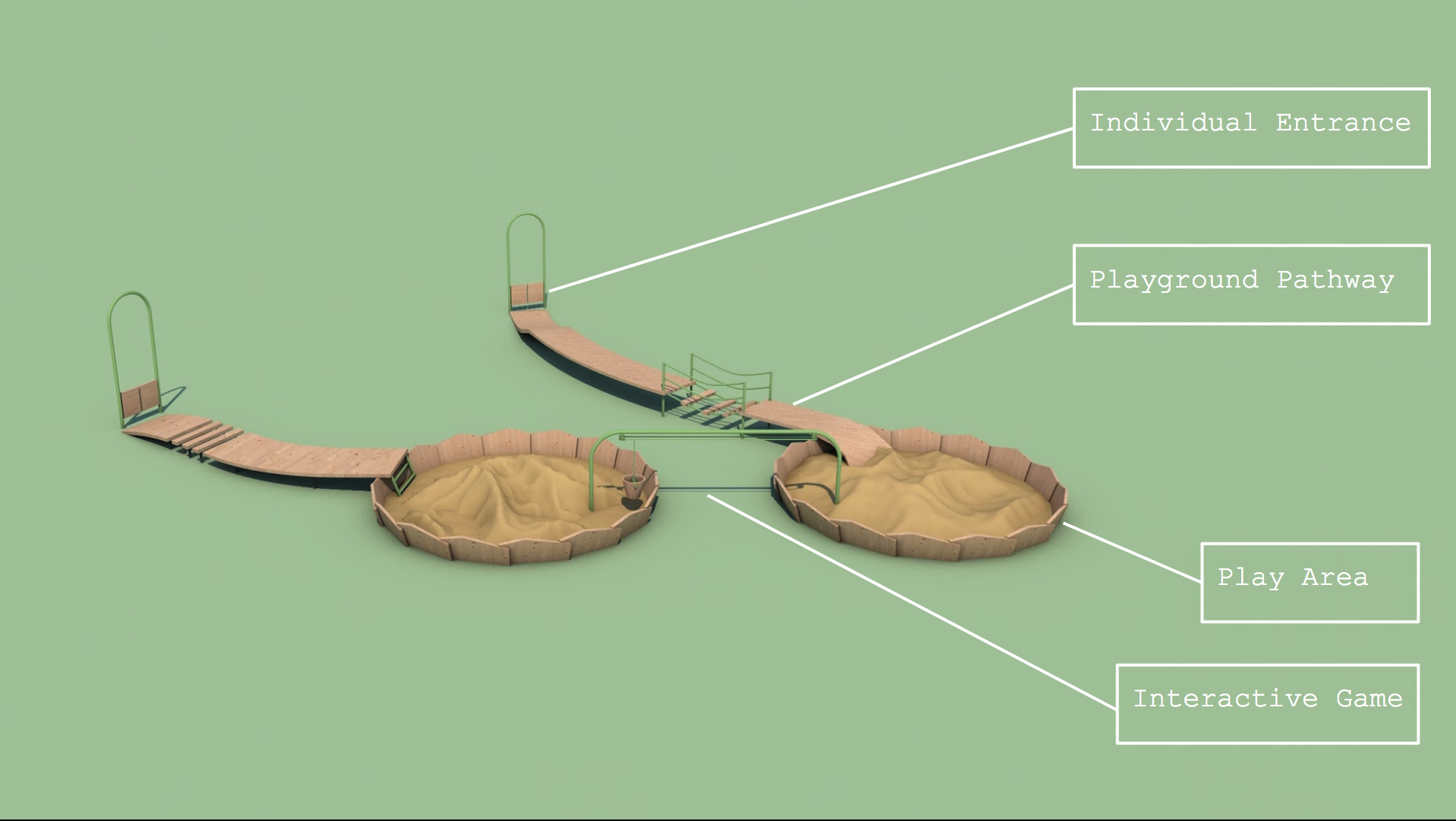 A playground must not be as sterile as a laboratory. Starting from this thought, the two inventors have researched the idea of an anti-playground to identify possible weaknesses and problems. In this theoretical anti-playground, the safety from infection is guaranteed, but it is not fun to play in, nor is it interactive or open to essential experiences. Reversing this concept of the anti-playground helped develop the six principle ideas that make Rimbin what it is.

In order to better understand the needs of parents and children, telephone interviews were conducted with several selected parents and children who described their everyday life during the restrictions. For most parents, it was clear that a solution must be found to offer their children more physical activity with friends in nature.

An important part of the research and development was the examination of biological forms and natural materials. For the two inventors, nature is both a place of longing and a source of inspiration. Rimbin’s playing areas are based on the leaf shape of the Amazon water lily – a plant that has especially fascinated people since its discovery.

To demonstrate its natural carrying power, the botanist Joseph Baxton placed his own daughter on the leaf of a giant water lily around 1849. Rimbin’s playing areas should be as safe and stable for children as these leaves. 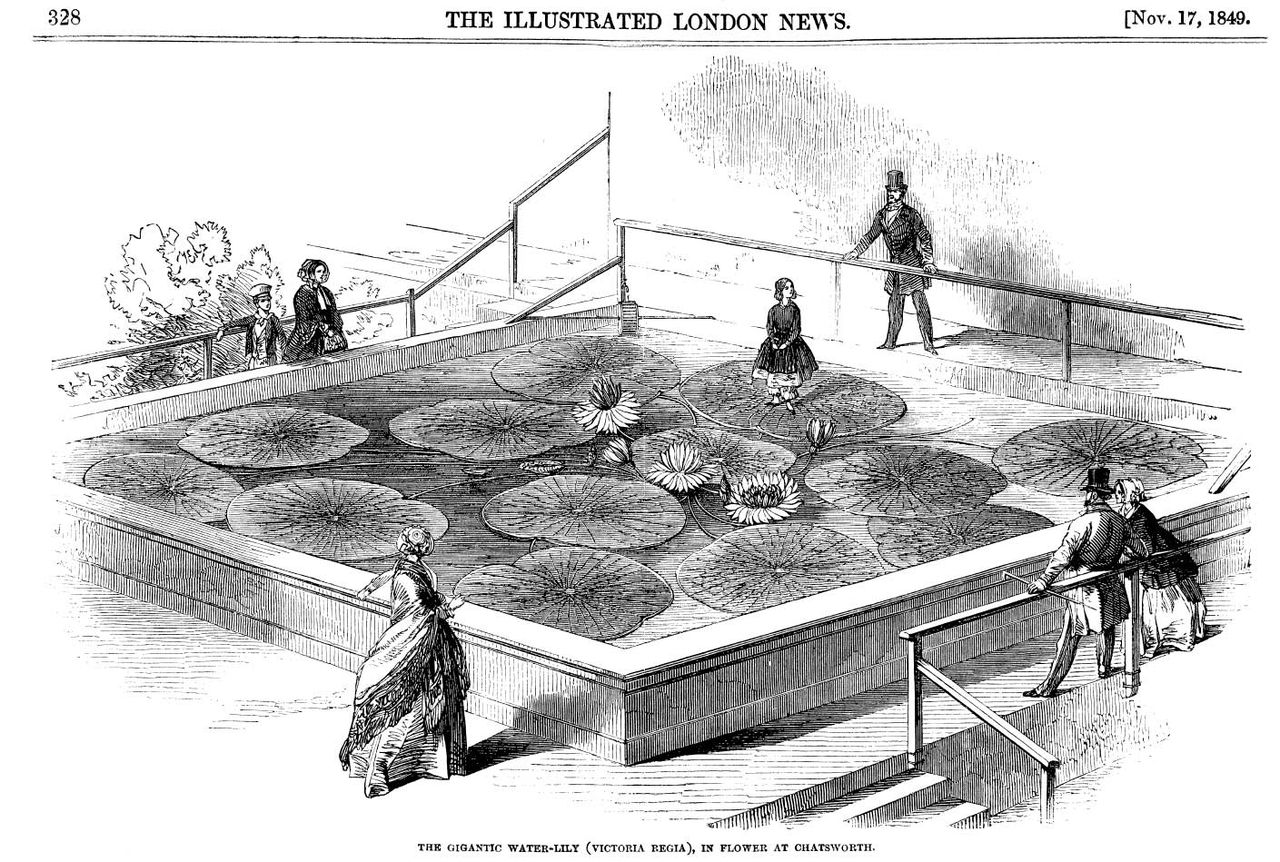 The aim of Rimbin is to develop a conceptual playworld that enables children to continue to enjoy exciting and inspiring encounters – even after the pandemic. The needs of children are at the centre of attention.

The concept also encourages long-term rethinking of playgrounds in urban cities so that they can remain open in a situation comparable to the COVID-19 pandemic.

If Rimbin as a holistic concept becomes a reality, individual elements can also be used in public spaces as individual playing stations, thus expanding the concept in a modular way.

One Comment "Rimbin: An Infection-free Playground Inspired by Nature"