In August 2016, the government of Mexico City, through the Ministry of Urban Development and Housing (SEDUVI), the Miguel Hidalgo delegation and the College of Architects of Mexico,convened the International Ideas Competition for the Construction of the Parque Lineal Ferrocarril de Cuernavaca (Cuernavaca’s railway Linear Park, abbreviated as PL-FFCC). 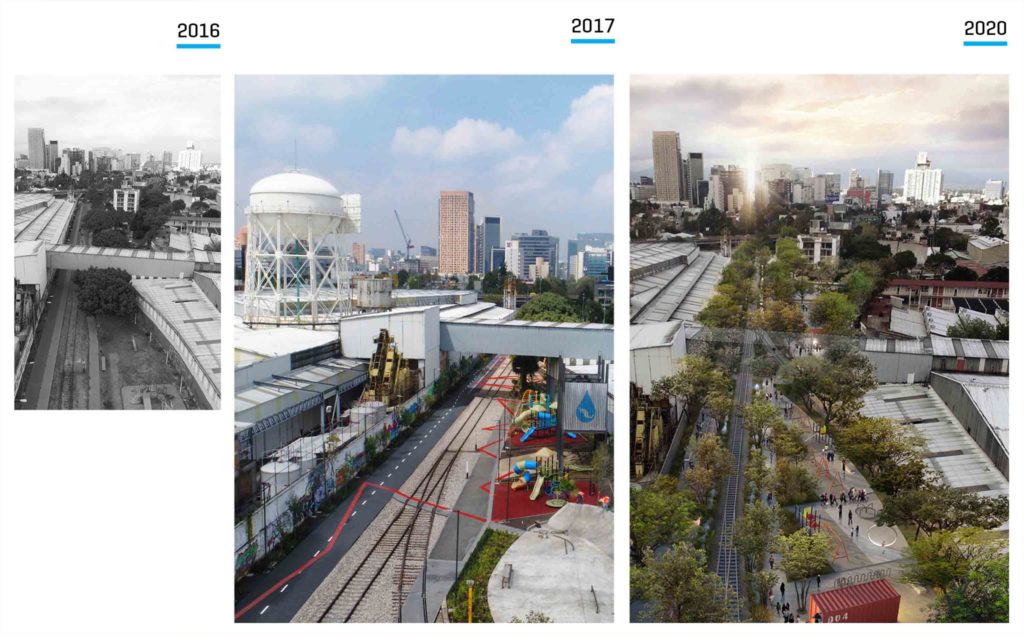 “We do not want to generate a finished project; rather we try to generate a project direction from an open vision that from the socialization and the participation of people then can be built a process and a project in the medium and long term.” 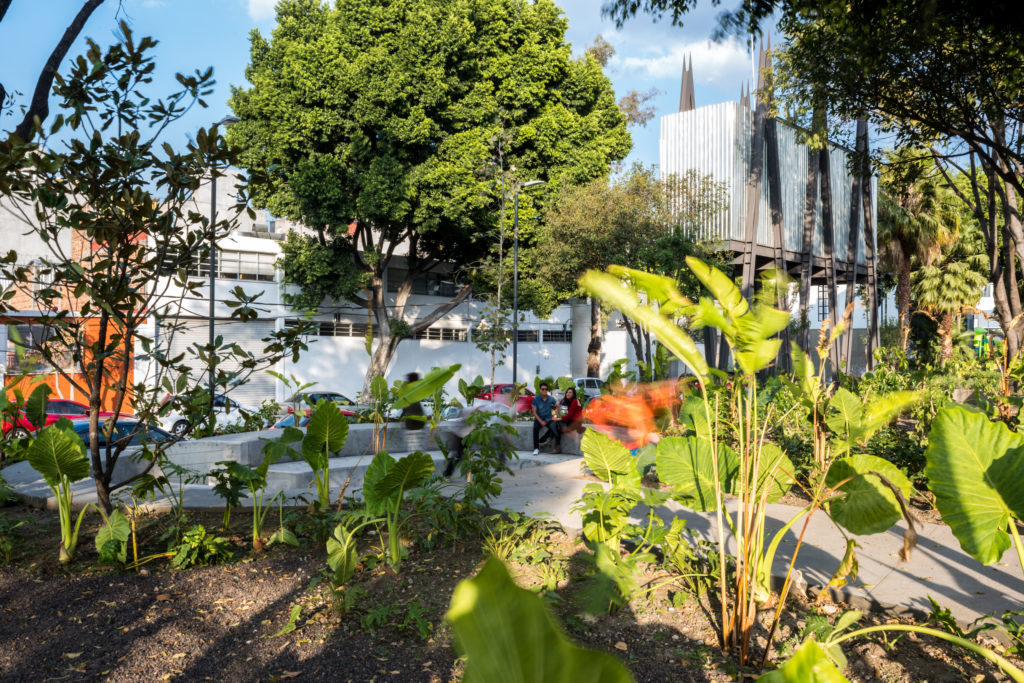 The green color. The construction of the forest.

An Opportunity / A Concept.

Our proposal was to create a linear park: a 4.5 km (2.8 miles) long urban forest that crosses 22 colonies and that builds a city; a democratic space, active, programmed, inclusive, sustainable, connector; a space that contributes in the spirit of community and can add to the feeling of appropriation of public space by people. 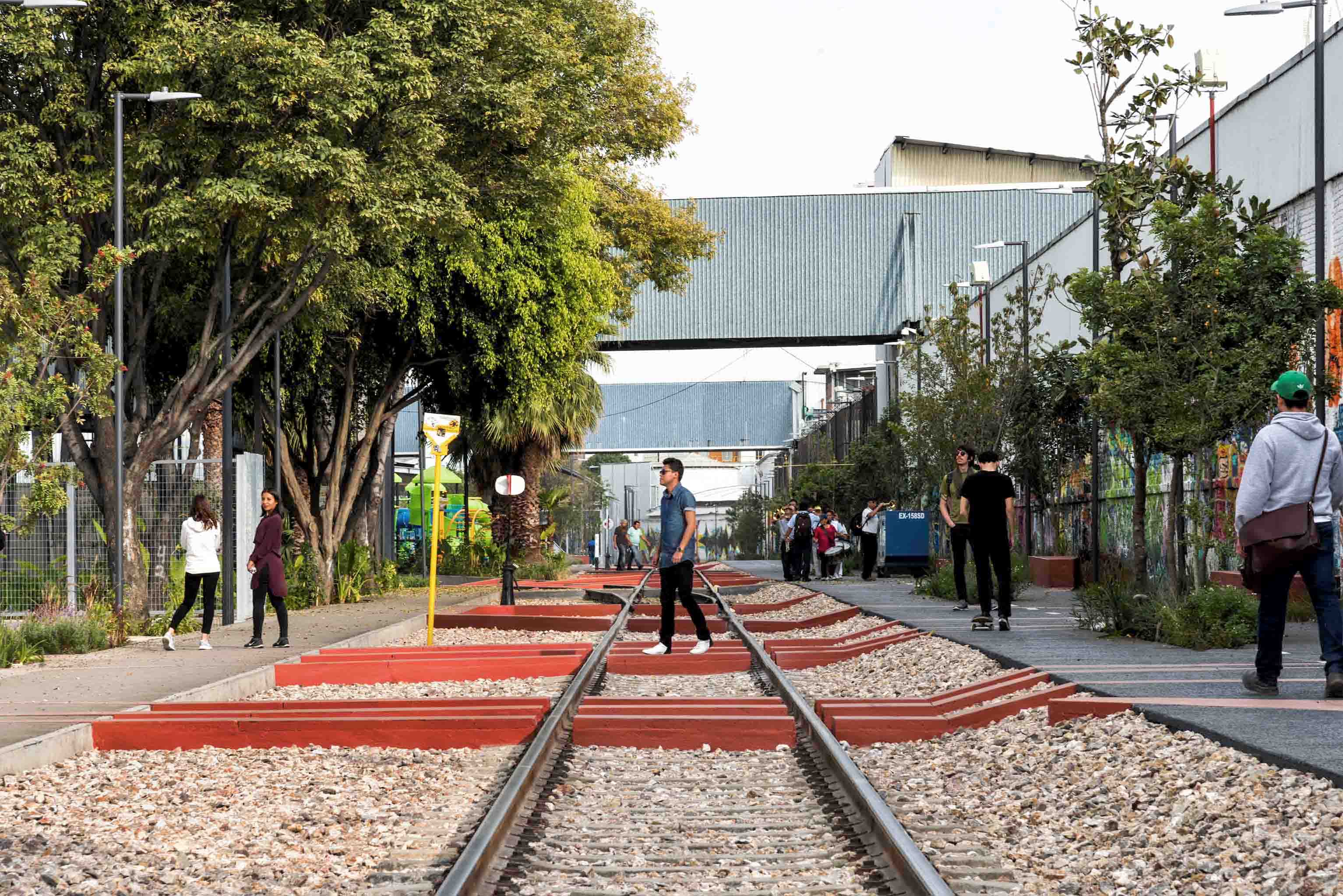 People. It adds to the feeling of belonging and pride – Pride of Park and Forest.

The first sector, which covers the first mile of the total length, and which is already completed, is marked by a double industrial-housing character; the Grupo Modelo brewery and the Progreso stationery combined with the small houses and some housing units build the spatial and social nature of the sector; from the contest we work and socialize the project with each other; at the beginning the project had a strong resistance and then, after intense socialization and participation, a high level of acceptance and appropriation of the people was obtained.

Plan of the inaugurated first section.

Actions were planned with the medium and long term in mind; scenarios 2018-2020 and 2030, future changes in the area, growth of groundcover trees, construction of the urban forest, and appropriation of the successive people of the urban space and sewing with the 22 neighborhoods.

In each of these actions people have to be an essential part both in the idea and in the instrumentation; only in this way will it be possible to achieve community ownership and empowerment, and with this, the strengthening of the project.

Elements that build the project:

– The red line: At a time when new walls that separate and divide are proposed, in a place of almost unbreakable parallel borders, we build a line that sews, that unites, an anti-wall and anti-border gesture, which suggests a system with permeable edges. It is a line that plays at ground level, rises smoothly, sews parts, points and builds accents, intertwines and connects. The red line is programmatic and functional, it integrates benches, children’s games linearly developed. 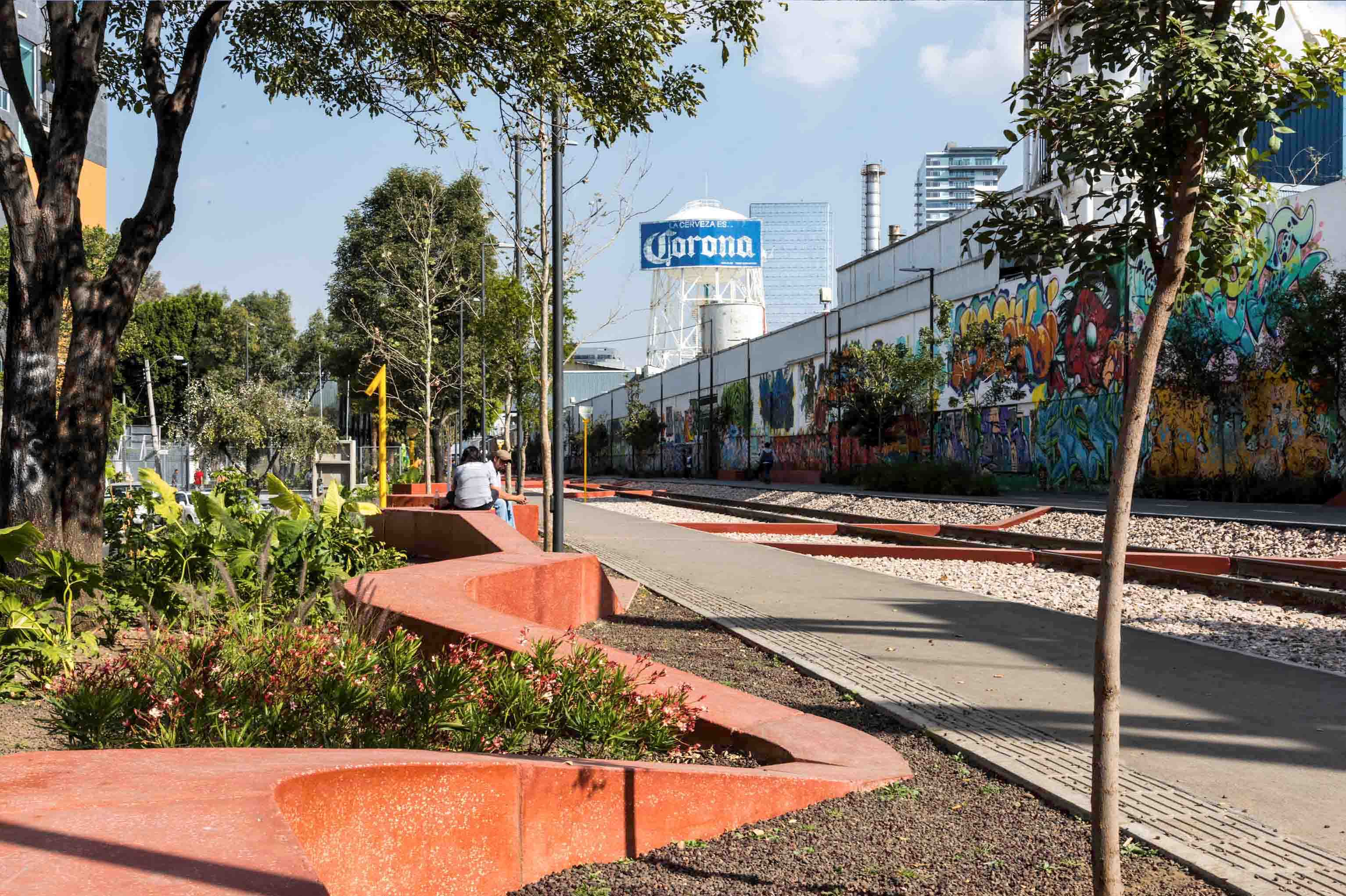 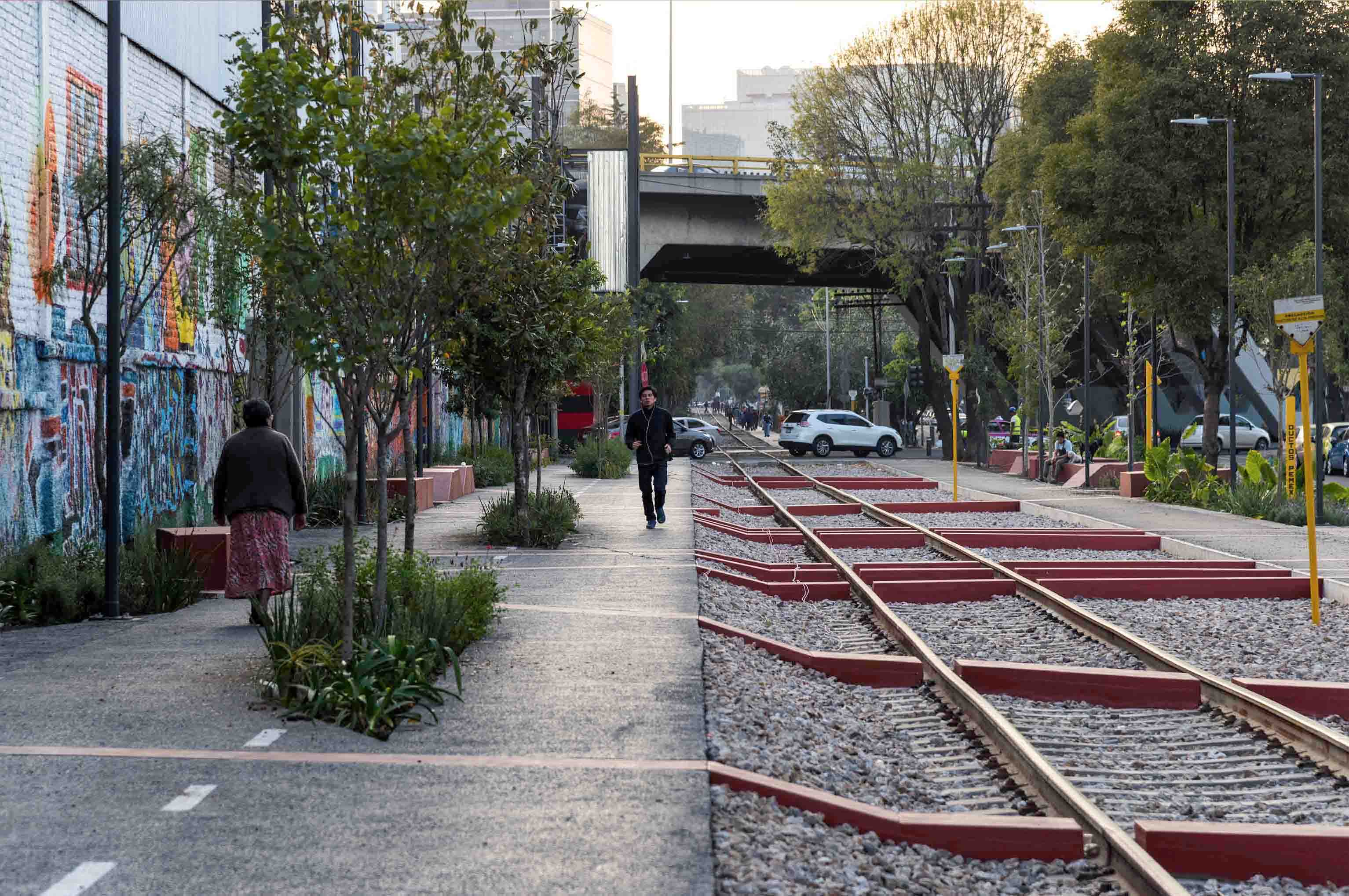 A line that transgresses the rigid system of parallels: train tracks.

– Follies of water1 / water taken care of and celebrated: We celebrate the water; we raise it and make it more present. The water follies build an emergent and omnipresent gesture in the park. Green and water, debts of Mexico with its people and its territory, are the elements that emerge and are accentuating the route over the linear park. These are the elements-resources within the irrigation plan of the park; to these are added the rain gardens developed along the route. 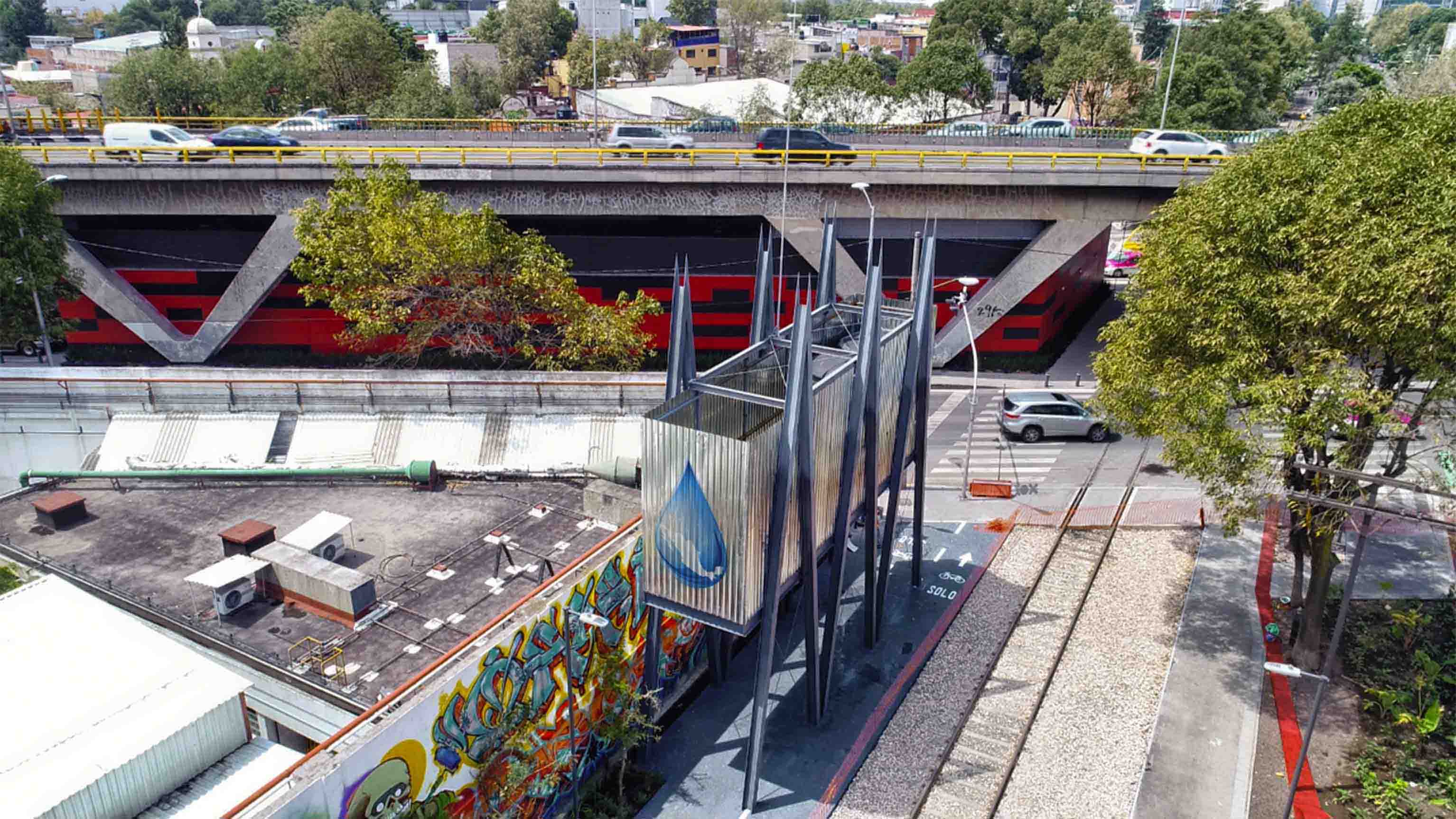 Follies of water. We celebrate water, elevate it, and make it omnipresent.

1 Follies are small constructions used to harmoniously enhance the routes of the walks of the garden or the park where they were erected, such as bridges, pavilions, caves, waterfalls, roundabouts, among others (Revista ARQHYS, 2012).

– The children’s park: Working with the community, the “Children’s Park” project was created, where photographs of the children of the colony were made, which would become part of the facades and edges of the park. The technique: Stencil. 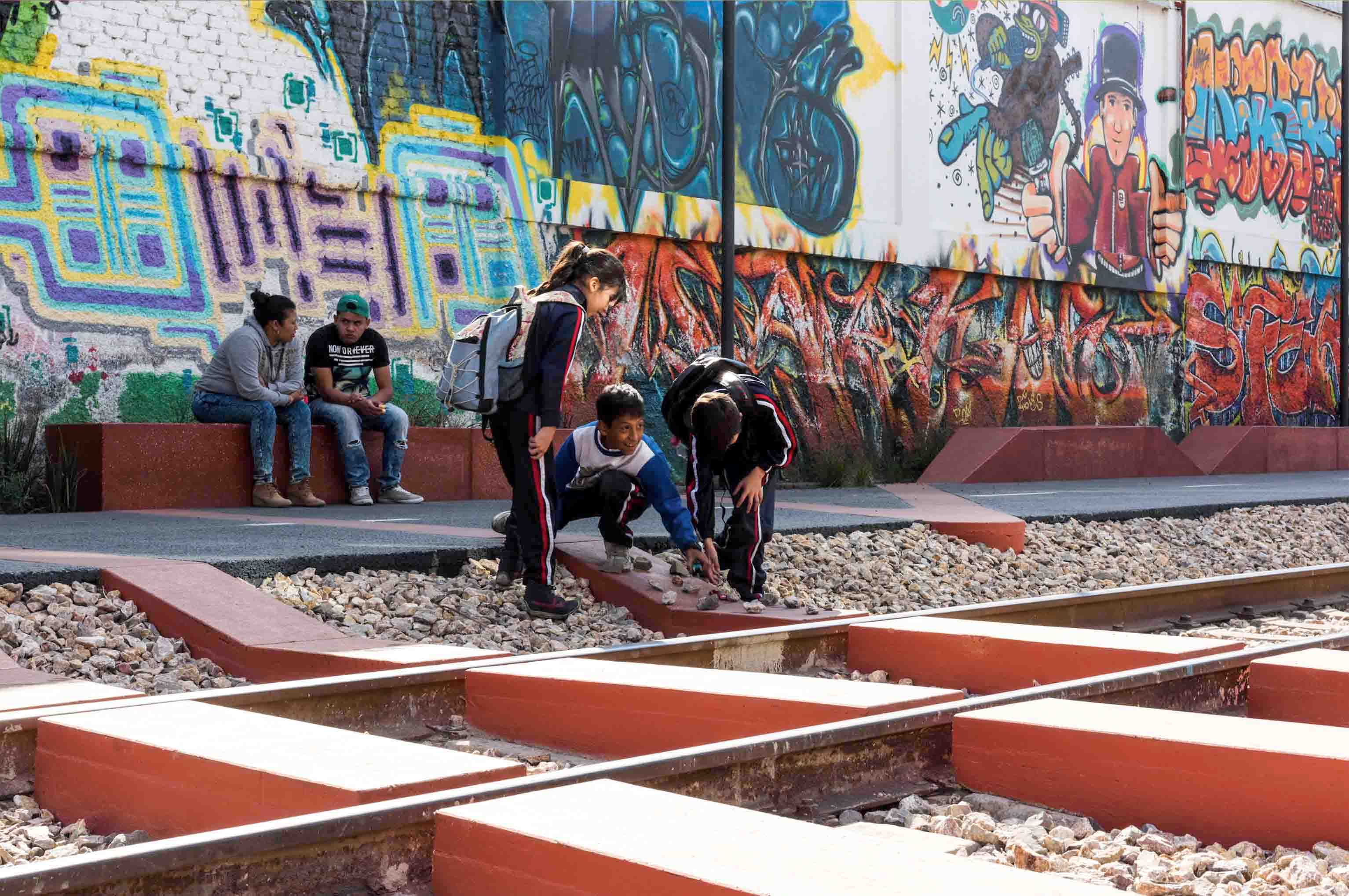 People. The creation of a place, activation of social life.

– We build programs in the park: Forums, meeting spaces, courts, skate tracks, pedestrian paths and bike paths, are the pieces that occur throughout the park. 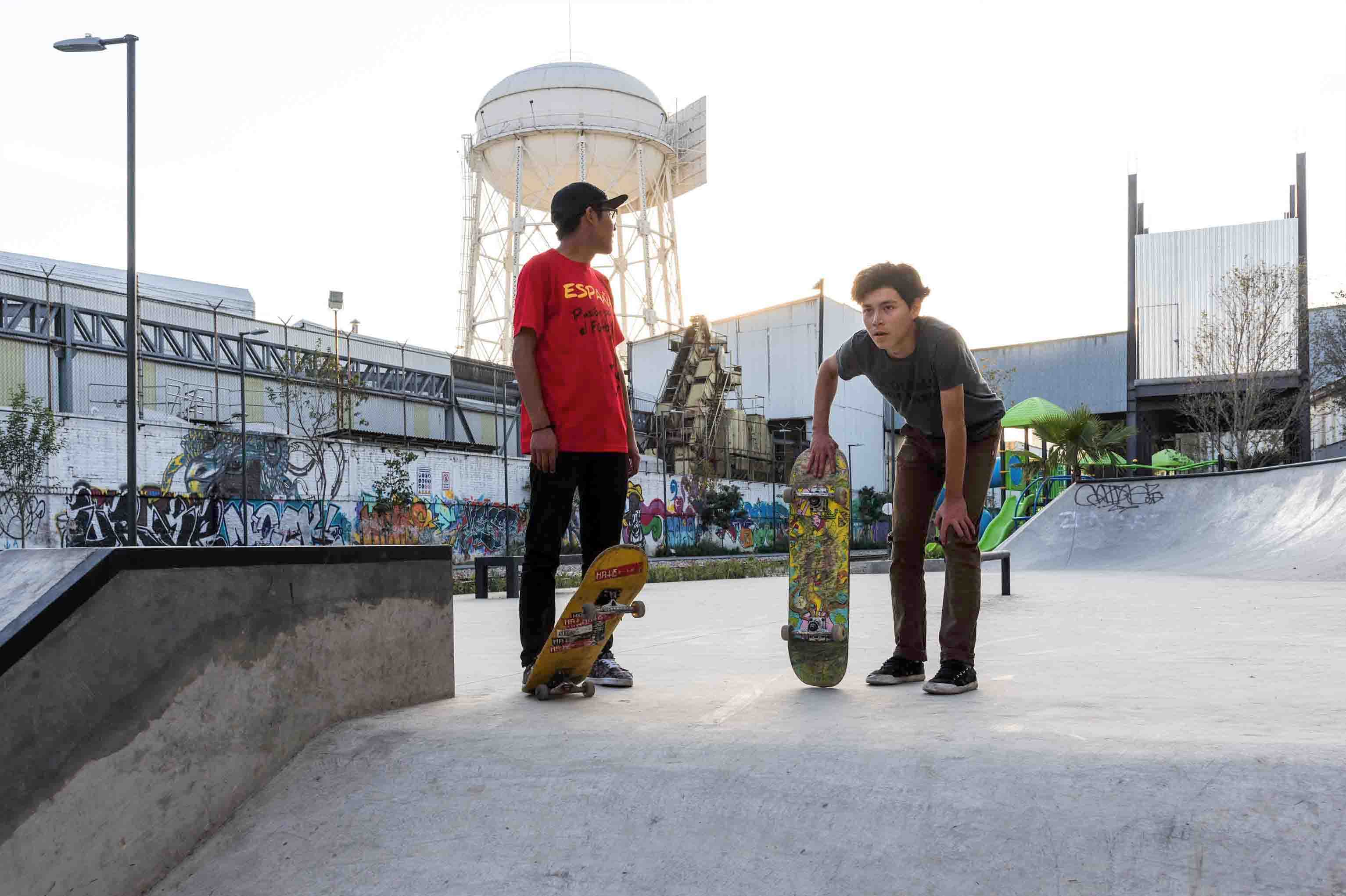