Infrastructures are an intrinsically human and cultural phenomenon, which has occurred for thousands of years, to sustain civilizations of many scales and levels of technology. Global Energy Landscapes is an essay on the new capabilities and responsibilities of man-made logistics to intervene the planet’s resources in the new century.

It is an interdisciplinary study of the environmental, territorial, economic and social impact of the new infrastructures that pretend to enhance the resources of the planet; exploring the levels of appropriation of the world’s great natural reserves or “global gardens”, antagonistic to the growth and urban concentrations in globalized hyper dense cities.

Today, about 97% of the energy generated is from nonrenewable sources, and although by the end of the century the population is expected to grow considerably, technological advances of recent times show a clear intention to harness world resources in a clean and efficient way. The sea represents 71% of the Planet surface and one of the greatest potentials of energy generation, despite being one of the less studied fields.
This is why “Global Energy Landscapes” takes as a model the development of tidal energy, in one of the highest tidal range coasts in the world, Rio Gallegos estuary, located in Patagonia. The isolation of the lagoon allows eradicating any environmental impact on the coasts, marine migration and ecological system. Our project proposes to understand the landscape as an operative platform of systems and networks that allow human existence, in the same way that happens with the infrastructures that give life to
our cities. In the era of megalopolis, of the continuous consumption and industrial state, the infrastructures acquire a new degree of visibility and complexity; being responsible for connecting human and environmental spheres.

It is through this understanding that we intend to transcend the appropriation of the current infrastructural typologies to develop a proposal that uses the landscape as operative land. consequently, the new water infrastructure is the result of multiple studies about natural logic of the estuary, including its natural reserves, ecology and vitality.

The strongest strategy was to introduce minimal components in a territorial scale project, forming networks in order to achieve the domestication of this new infrastructure.

To access the breakwater, a bridge that connects the continent with the open sea is proposed. It is now the transition between the continent and the water infrastructure. Interestingly, the bridge is situated by the most recognized route in Argentina. With minimum dimensions, this vehicular and pedestrian pathway represents the access to the breakwater system.

This Mega scale project was designed as a 12 km linear park, were we proposed 6 different components along the park: birdwatching, dynamic pool, shelter, ecological connector, viewpoint and a double path; which are directly articulated to landscape Patagonian resources. These elements are the nexus between de user and the Patagonia.


In order to not interrupt the diverse maritime ecosystem and allow a free connection between the inside lagoon and the outside ocean, we propose to reconfigure the breakwater limit at certain point for animals to cross.

We propose this pathway as a closer narrower travel to the ocean, where people can feel the immensity of this liquid territory. The landscape can be appreciated at different levels, sometimes near the low tide or high tide, which is the most interesting local resource. In this specific case, visitors can appreciate two different but linked act ivit ies. Eolic and Aquaculture. 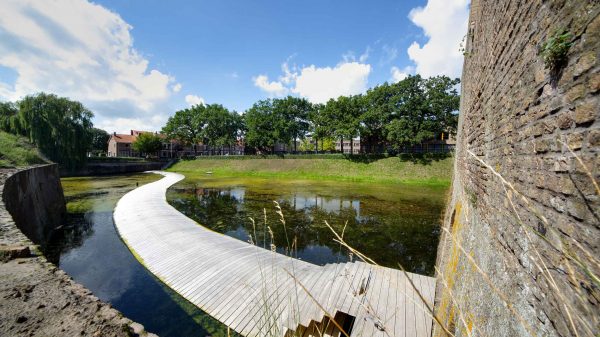