As this a property protected by the National Institute of Fine Arts (NIFA), the first renovation resource we thought was to dress the facade with plants, so we began to document ourselves on the subject. The initial impulse was to give it life and embellish it with green areas. We wanted to embellish the facades with natural resources, and in an accessible way, so we wanted to start from the outside in, provoking basically an exterior oriented project. 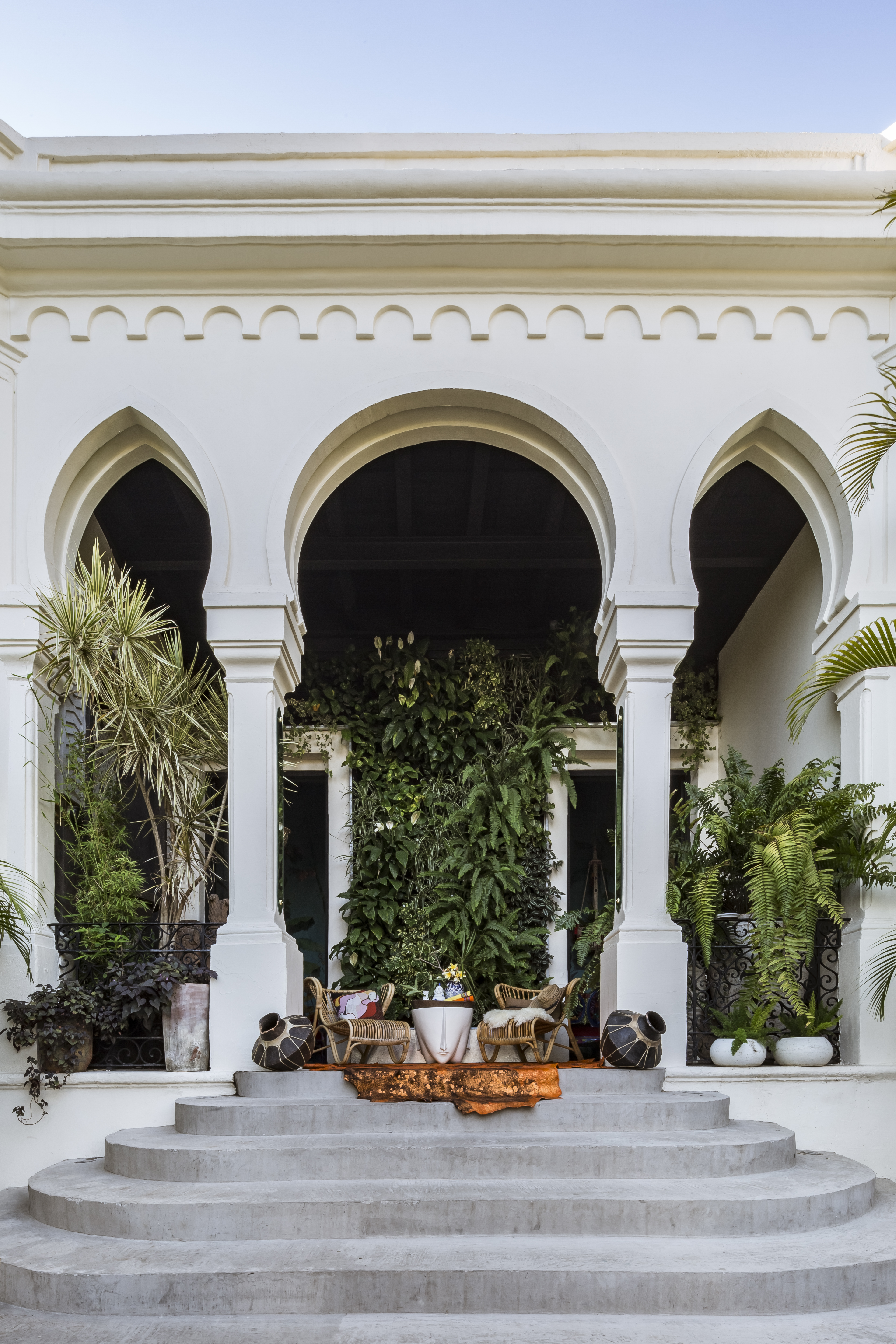 The construction of Le Casa Blanca dates from 1900, and the Moorish style inspires it. Its location is in the American colony in the city of Guadalajara. The central courtyard (61.60 m2), is located at the back of the property, and it was the main gathering center of the family that lived there.

In the conception of the project arose the vision that the same nature recovered its territory. Therefore, for its architectural restoration, it was thought of a proposal to incorporate green areas to become the heart of the building.

There, we find monuments erected by ancient humans, now in ruins, and plants that have appropriated the place. Angkor Wat is a clear example of the visual proposal that we wanted to retake. 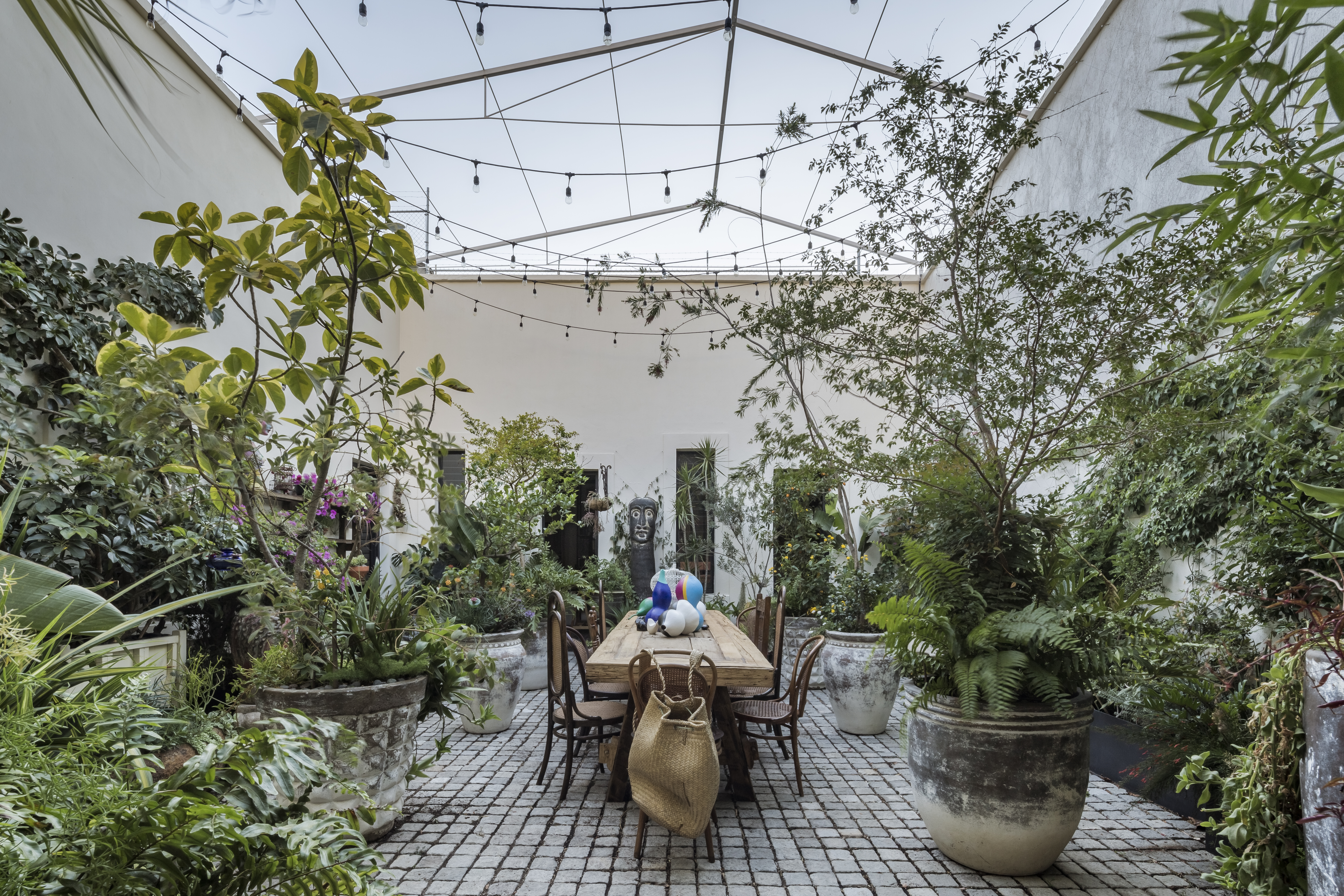 The big challenge was to assign each space a different character that reflected a part of its past. In creating the concept, we imagined that it was once home to a great Montezuma bald cypress (Taxodium mucronatum), one of the most important trees in Mexico, for its mystical meaning and for its contribution on sustaining the ecosystem.

Aesthetically maneuvered by human techniques was how we achieved through green brushstrokes in all areas, this purpose. Now, the tree was recovering the nooks that belonged to it.

In the center of the terrace was included a dining room that consists of a solid wood table recovered from a door that matches with some blacksmith chairs, which were the result of the reinterpretation of the classic models by John Risley. To allow visitors to relax in the middle of a magical and playful garden. 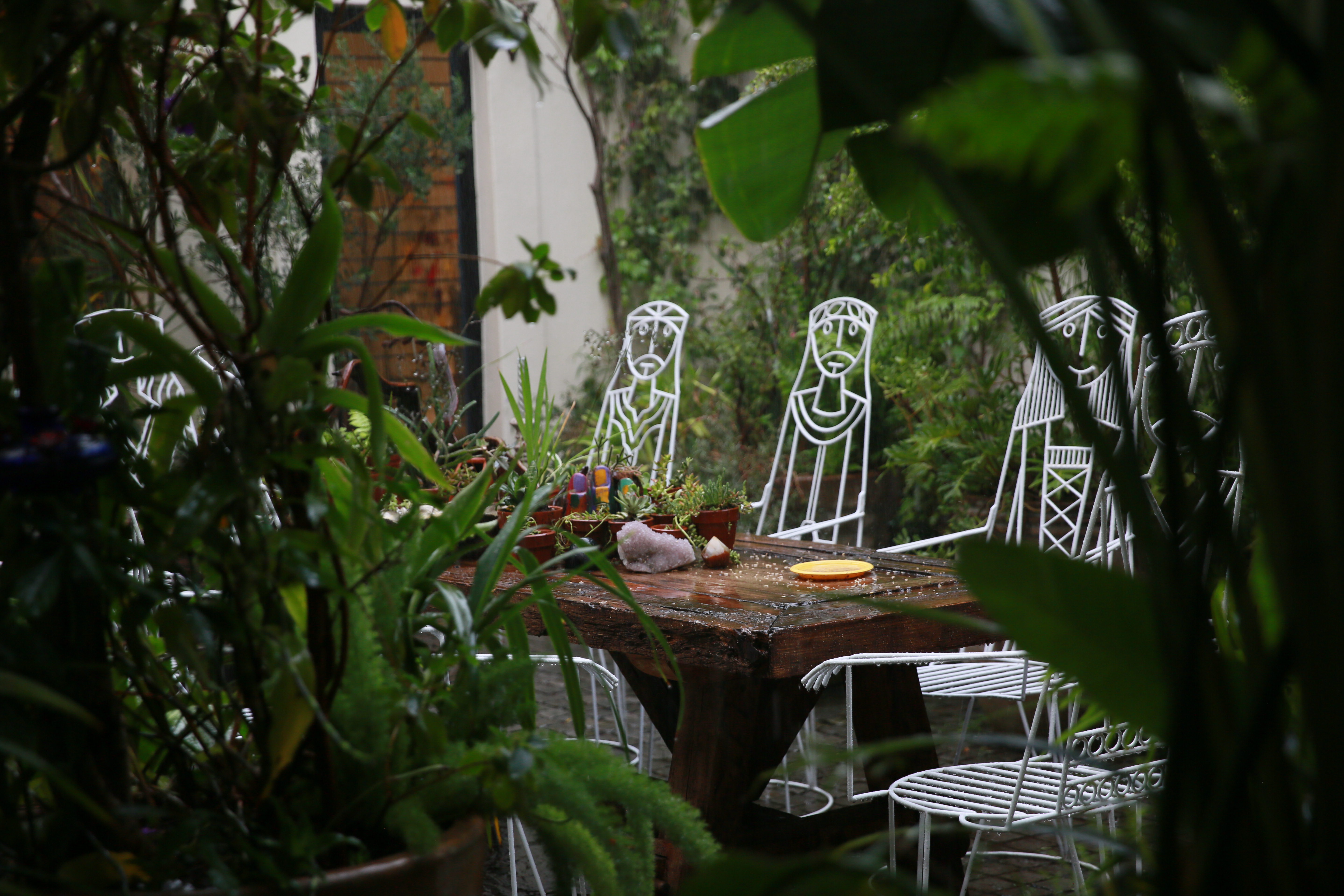 The intention with the green wall that we placed on the main facade is to create a visual finish that, from the entrance to the property, generates amazement. It has a dimension of 4.98 meters wide by 3.04 meters high.

For this design, the inspiration was the Tule tree, which gave life to the project of the house, where an abstract “T” can be observed, which alludes to the trunk and branches of the tree. 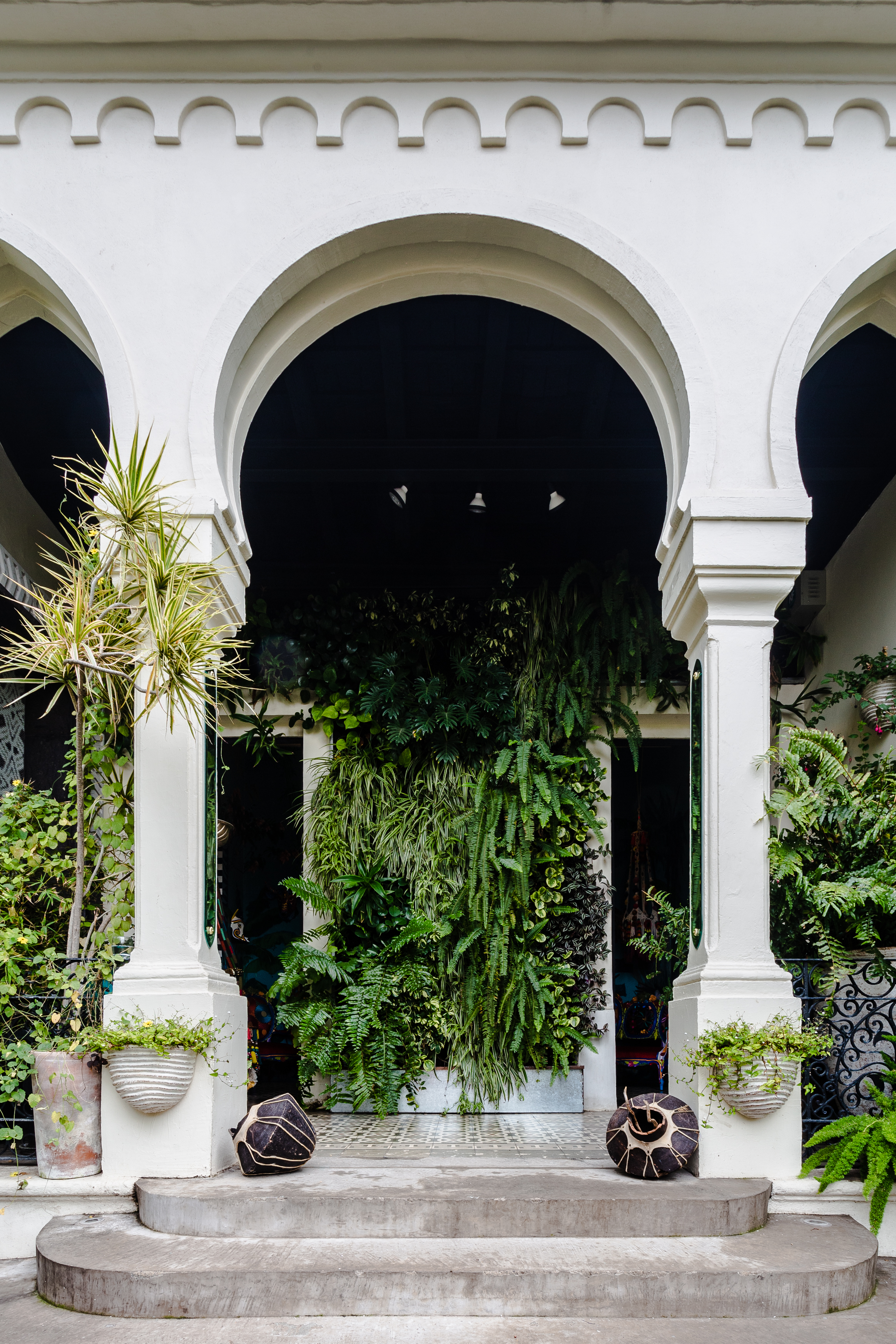 In this wall we include Boston fern (Nephrolepis exaltata), fishbone fern (Nephrolepis cordifolia), Aralia L., Callisia fragrans and Bomarea ovallei, which are plants that provide an abundant appearance and that do not require intervention for their growth.

Allowing nature itself to freely take its course, following the original concept proposed for the development of the intervention, avoiding the linear strokes and that the work becomes a structured project.

This area has an automatic irrigation system that facilitates the maintenance of the garden. 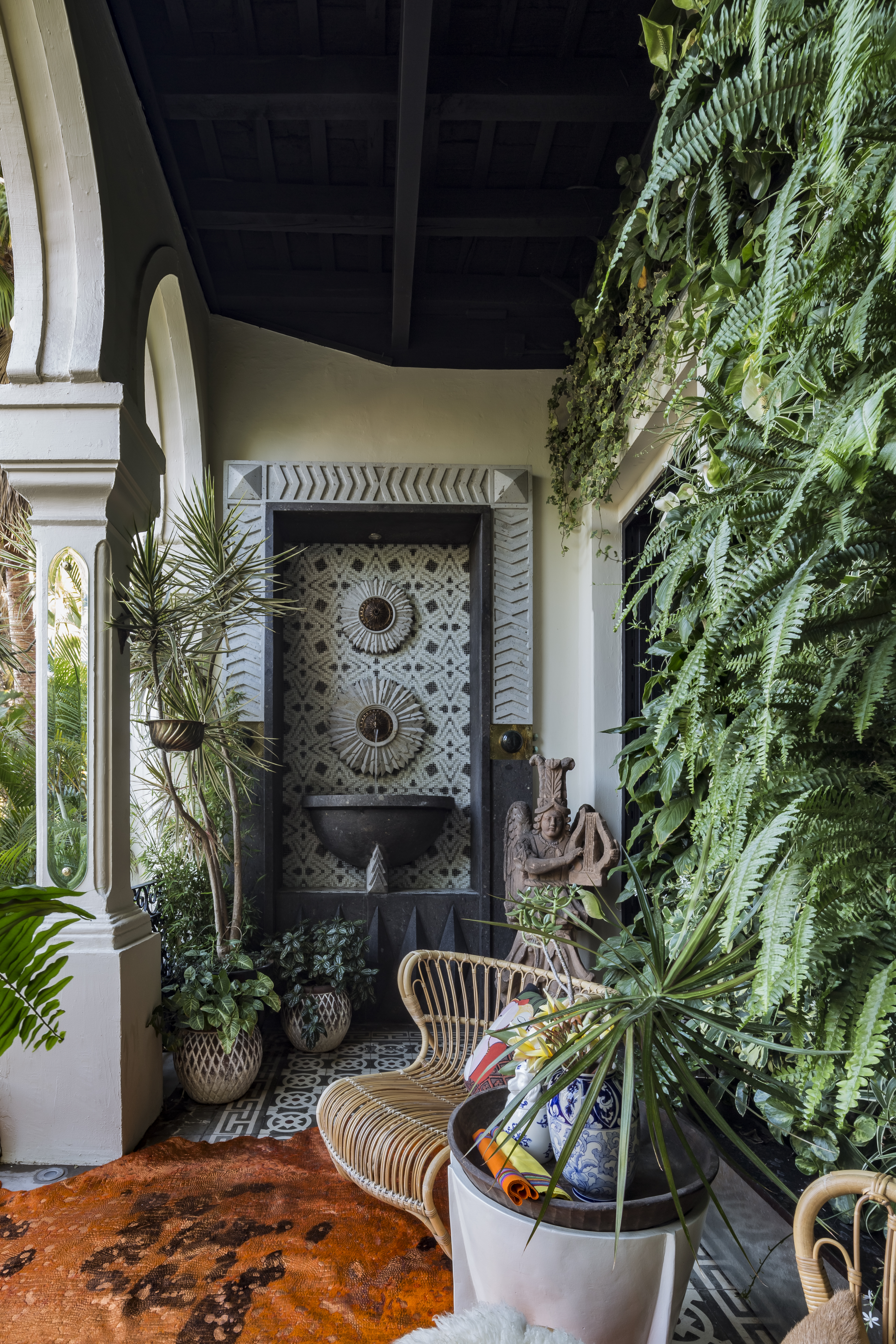 The process took a month and a half to complete from conception to creation and implementation of all the technical details. For the realization of the project, specialists in the field participated to develop the original idea.

In the Central Patio, the intention was to create a natural biosphere where all kinds of birds of the region, especially hummingbirds and butterflies, visit and feel sheltered in this place.

We included trees like the species Duranta erecta L., which was allowed to grow organically, and was able to formed hedges while, at the same time, provided food for the species.

The idea is that the vegetation and foliage would fulfill their purposes for the fauna of the territory. We intended to create an organic and natural scenario, overflowing textures, without looking linear and manage to represent how plants grow where man does not touch them. 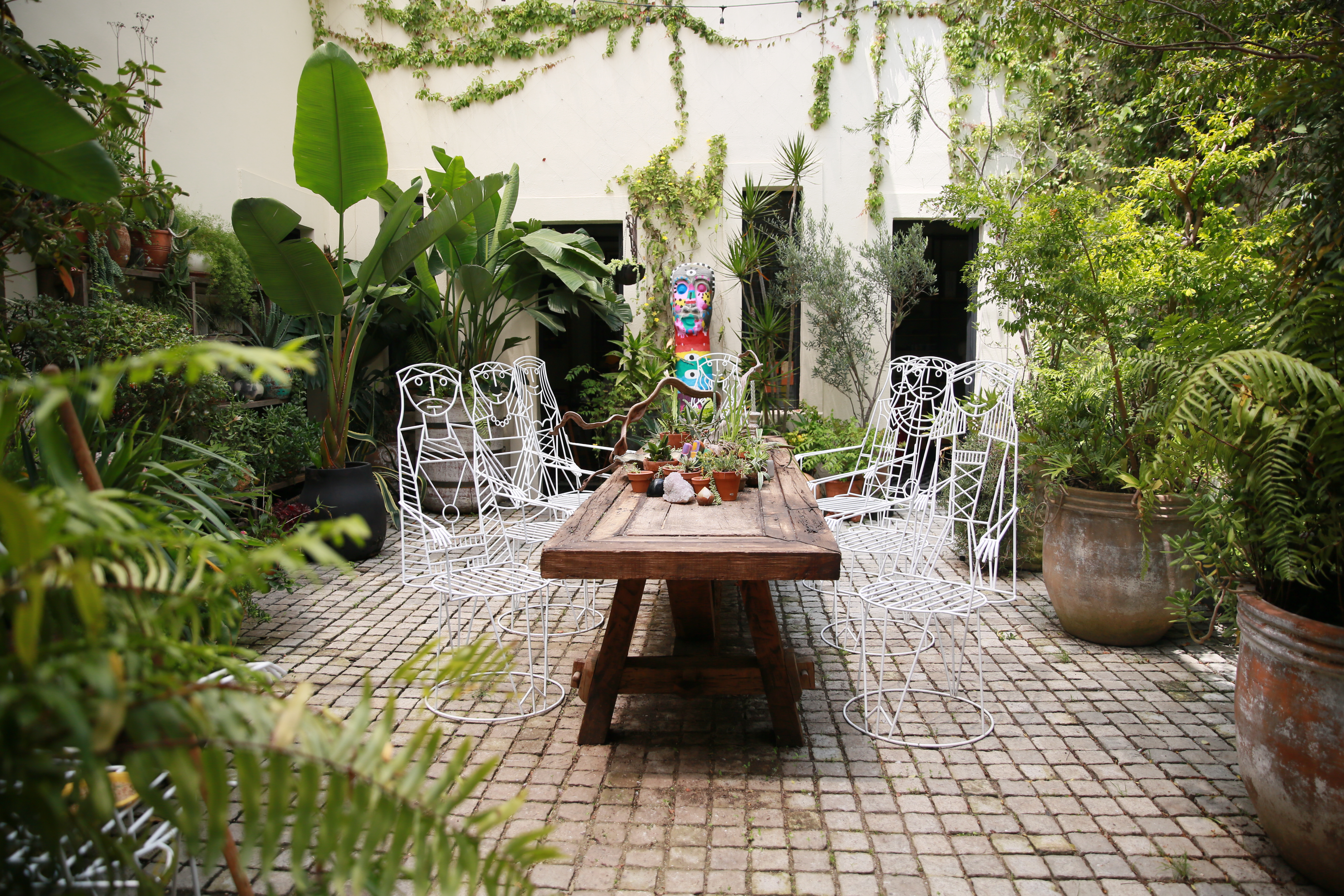