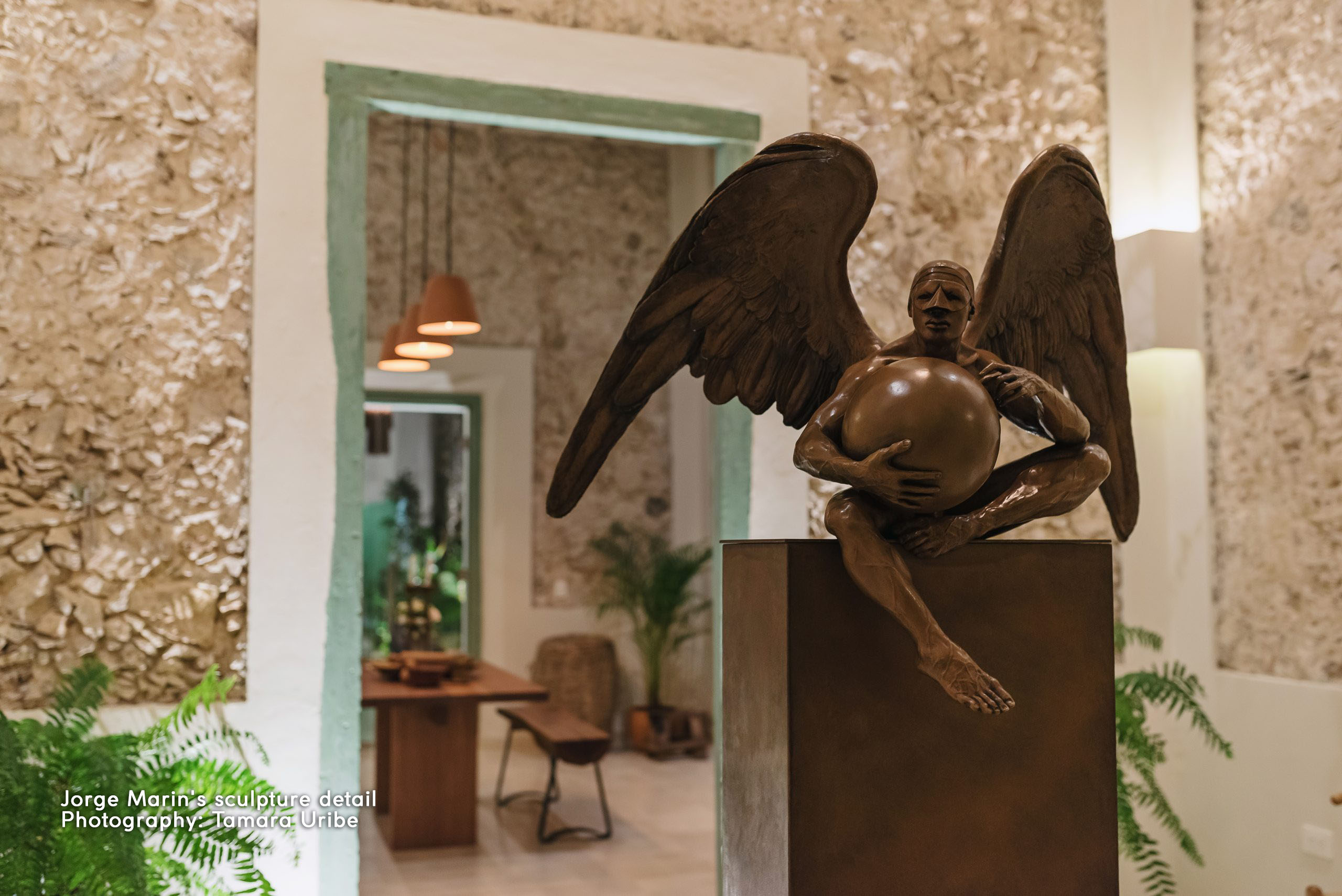 Casa Canela is in the heart of the historic center of the city of Merida, just a few steps from Palacio Cantón on Paseo de Montejo. It is an old manor from the beginning of the last century that houses behind its sober colonial facade, a 155 square meters two-room house. As we go through the green doors of the entrance, we are welcomed by a spectacular sculpture by artist Jorge Marín.

This sculpture is positioned in the center of the space. Above it, a simple lamp hangs from the original green beams that decorate the ceilings and crown the exposed masonry walls.

The stone texture contains moldings and skirtings in light tones, which also highlights it. The white color of the paste floor joins with them too.

As you follow the path to the kitchen, you can see the old green frames of the original doors guarding an oil painting by Isabel Garfias. In the center, on a simple wooden table of tzalam wood, three terracotta lamps hang from the beams.

Kitchen cabinets repeat the green shades of the existing colors of carpentry in the rest of the house. On the backsplash of pasta floors, several ornaments and utensils share the space with engravings by Fernando Andriacci.

Two glass doors invite you to follow the path towards the terrace that performs as a dining room, where a giclée by Pedro Friedeberg is highlighted, and a large half-point arch leads us to the central courtyard.

Surrounded by tropical vegetation and between high walls of different textures, a small chukum pool opens our way to the rooms located at the back of the house.

“The design respects and rescues the historical values of Yucatecan colonial architecture.”

With a more modern design, the first bedroom has a bed header made of pasta floors on which it rests another Friedeberg painting from the Urban Gallery Blanquis. Visuals from the bed take us outside thanks to the windows located at two opposite ends of the space.

One window is overlooking an interior garden and the second one overlooks the arch that is formed under the staircase that leads to the second bedroom.

The bedroom upstairs, as well as the one on the ground floor, has closet and a bathroom with a dressing room that has the plus of having a small terrace overlooking the central courtyard and the pool.

Casa Canela seeks to respect and rescue the historical values of Yucatecan colonial architecture in a pure and sober way.

Casa Canela combines the traditional colonial architecture with modern details and modern comforts to create a small oasis in the center of the city.