When the First Landscape Claims its Place

When the First Landscape Claims its Place

This is the relation of how everything was put on hold, everything in calm, in silence, all motionless, silent, and the expanse of the sky was empty…There was nothing standing up; only the calm water, the placid sea, alone and tranquil. Nothing existed. There was nothing endowed with existence… Then Tepeu and Gucumatz came together; they conferred about life and light, what they would do so that there would be light and dawn, who would be the one to provide food and sustenance. Thus let it be done! Let the void be filled! Let the water recede and make a voide (space), let the earth appear and become solid! -So, they said.- (Popol Vuh: 169, 171).

The landscape that has impressed men the most is the natural one. Thousands of years shaping the land, ecosystems seeking balance, water, and wind as hands over the clay, have resulted in the man being amazed by such creation, thus forming worldviews in the indigenous people of the planet.

The days of this confinement, caused by a virus out of its habitat, have made us reflect on this landscape, one that only few of us have been concerned about, along with its continuous deterioration. An alleged development of our civilization has caused the loss of an enormous part of this natural landscape, ecosystems that keep the planet in balance, and that paradoxically, indigenous people are the ones that best preserve them with their ancient wisdom.

For the indigenous Mayan people, the water was the thing that already existed, and from this, this tranquility, is that the land emerged and the landscape was formed. Animals were created and occupied the spaces assigned by the Gods. Men were the last one on the list of creations, and came to occupy an already inhabited space. 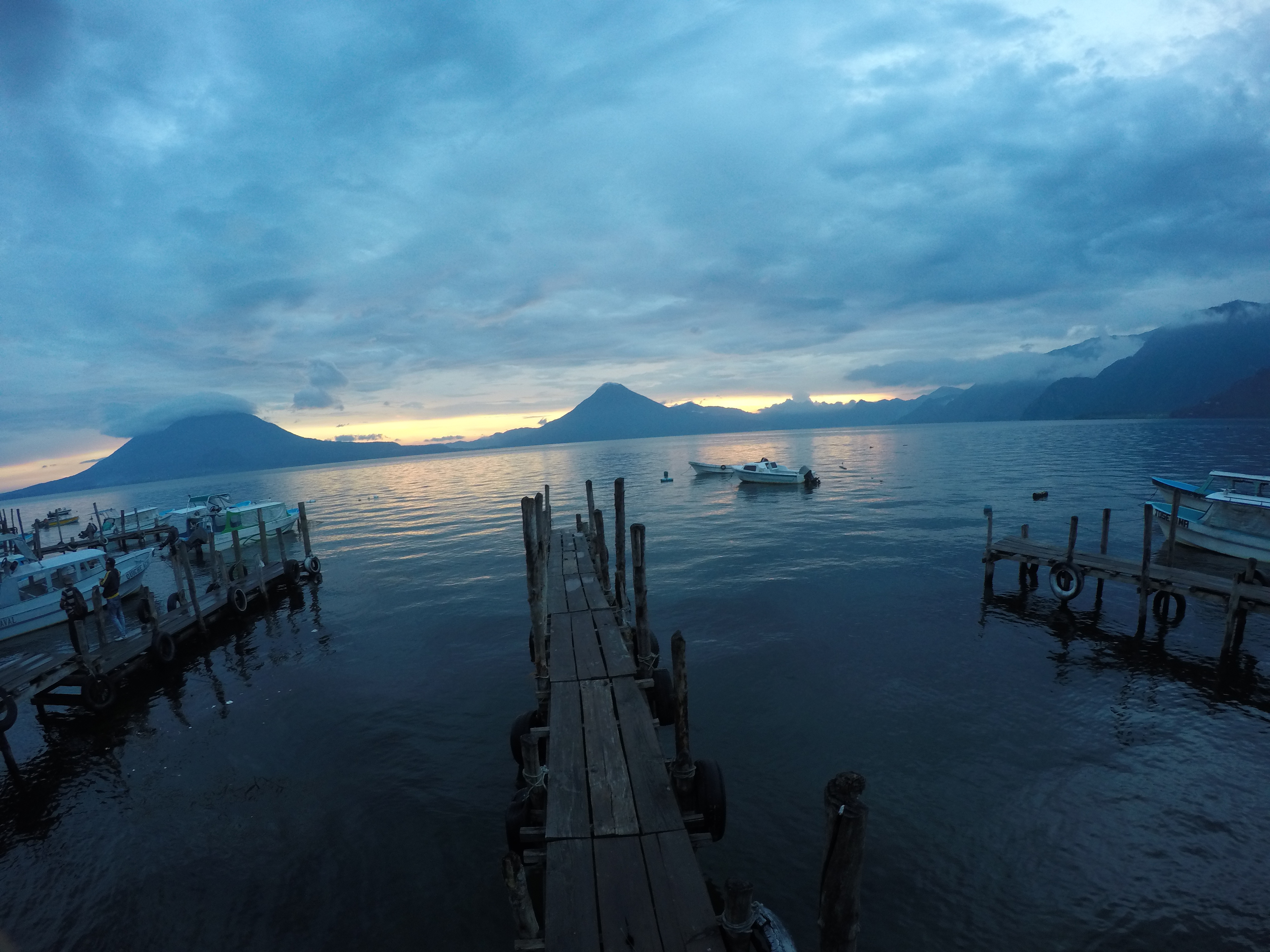 Sunset at Lake Atitlán in Guatemala, a landscape that perhaps inspired the worldview on the creation of the earth
Photography: Aurelio Sánchez

For the wixárikas, the natural landscape was illuminated by the moon and the stars at the beginning of time. The man emerged from the sea to meet the deer and the sun rising on the first sunrise. A similar landscape is described as the Seris, who say that, on earth, there were the only sea, sky, and sea animals; the earth was then created with sand that the sea turtle managed to extract from the depths.

In the Mesoamerican cultures, the presence of water is essential, it was something that was not created, that already existed, and from which life and the earth, on which animals and men would inhabit, arised. In our geography, in the Yucatan Peninsula, it isn’t easy to imagine this landscape. Water belongs to an underground landscape in the underworld, which is accessed through caves, cenotes and wells.

The presence of man on earth has been a turning point in the history of the natural landscape, in our region, this landscape was transformed by men with the construction of large and small towns of the Mesoamerican period. The absence of large aquifers forced the Mayans to reform the landscape to access vital fluids in their settlements (Schele and Freidel, 2011: 62). It also made them value these repositories, making them sacred sites, and linking their ceremonial centers with the location of the water. 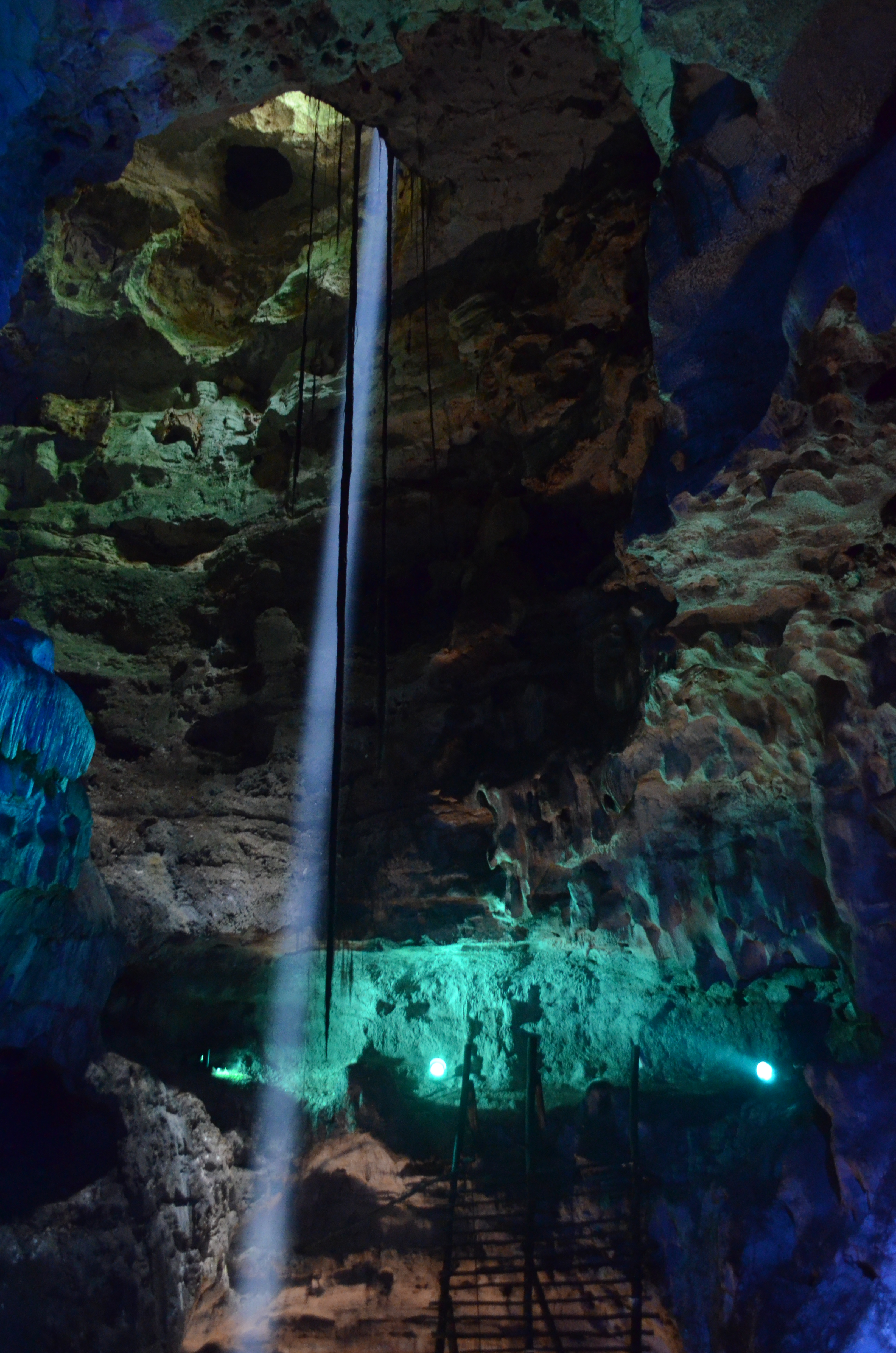 Cave of Xtacumbilxunaán to which the Mayans accessed to get water, famous by the lithography of Frederick Catherwood. Bolonchén de Rejón, Campeche
Photography: Aurelio Sánchez

The above did not save these cities from their collapse (Thompson, 2012). Despite their scientific advance in arithmetic, their specific calendar, and their astronomical knowledge (Sharer, 2003), the socio-political structure that helped the Mayan people to live in harmony with their natural environment was the Kúukchabal.

This jurisdiction of the supreme rulers was composed of towns called “cab”, full of extended families with social character, “and its spatiality was determined by the length of the mountains occupied or cultivated, i.e., places where human energy had been invested, and in no way was delimited with linearly drawn limits or boundaries” (Okoshi Harada, 2018: 18).

Given the deterioration of ecosystems, what is the landscape that invites us today to reflect on the future? For the Mayans, the future is behind us, and the past is ahead, because it is something that we can see clearly, unlike the future. If we look at our past, we can see the great cities of the Mesoamerican period that have been claimed by the first owner of space: nature.

Although some archaeologists called these settlements “garden cities” (Folan, Kintz, and Fletcher, 1983), the need for food drastically transformed the natural environment, leading to the collapse of big cities. Today, we are looking for an urban landscape that integrates nature as opposed to the integration of the urbanization with nature, the first occupant of space.

The need to feed a growing population in cities is also transforming the natural landscape, the ecosystem, and biodiversity of the Yucatan Peninsula with large tracts of monoculture. We have not learned to take a good look at our past.

Solutions to climate and energy issues are the staging of agroecology, which have already been practiced for centuries in the Mayan villages. Still, they are now proposed as a solution in urban areas.

The balance between humans and the earth is necessary, but this implies a change of attitude towards our existence in this world, a more coherent way of inhabiting the territory; a philosophy that indigenous people have practiced for centuries and from which much can be learned, the concept of the subjectivity of creation, men are one more element in this planet, and not the center of creation.

We do not think so. If we turn and turn and turn, the south is always the south, and the north is the north. We are in the world, and we are not the center of the world. The rest of the path was silent. That day, we understood that we are not only two different worlds, the Mayans are right (AC Outrage, 2014). 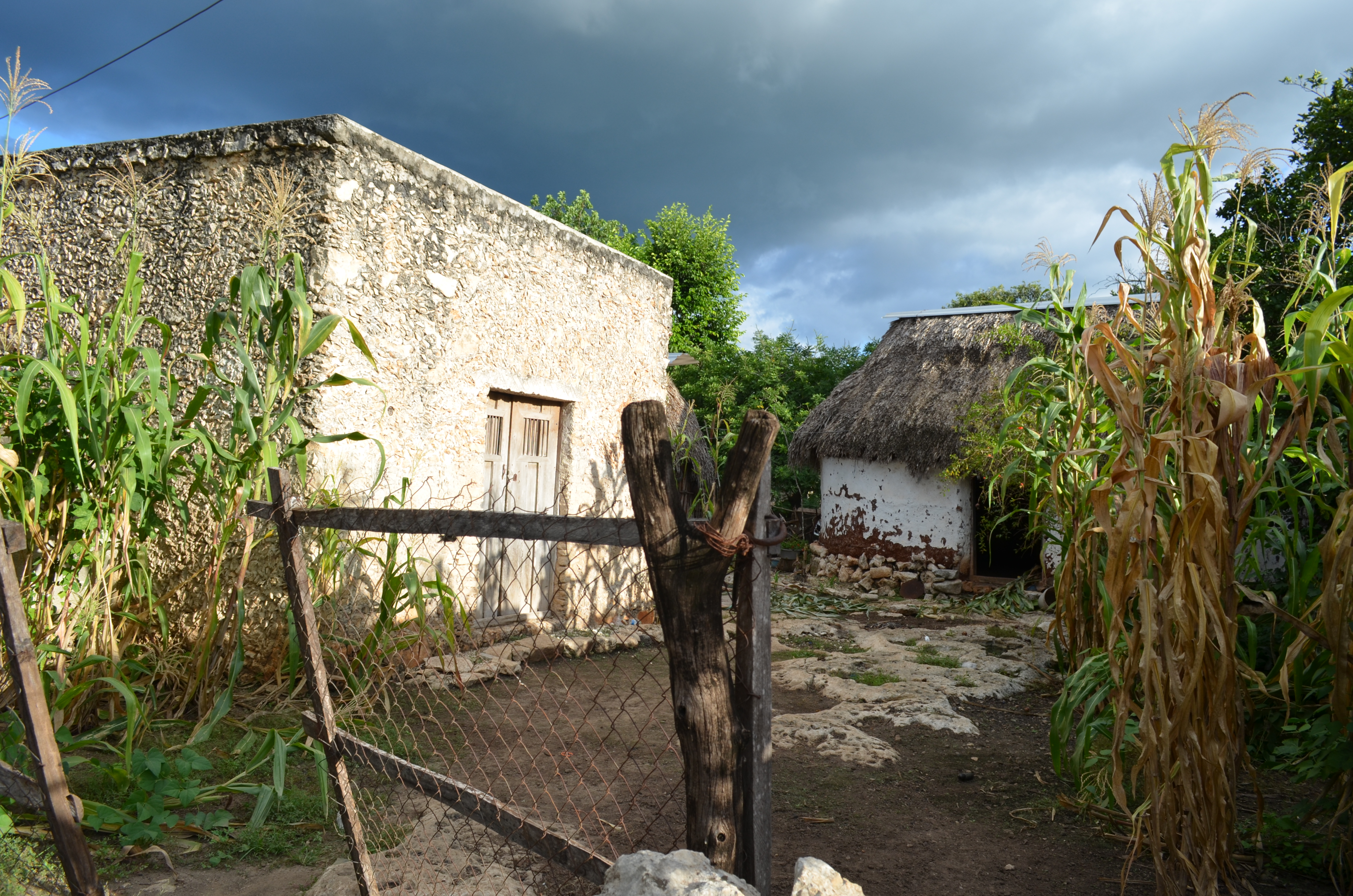 Maize field in Mayan plot for family consumption in the celebration of the souls, Nunkiní, Campeche
Photography: Aurelio Sánchez